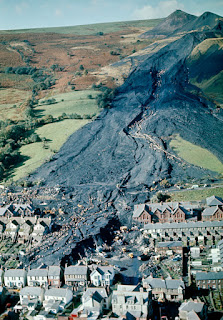 It's Friday evening and I'm pacing up and down the lounge carpet waiting for Ms Moon to return from work. We're all set to begin the weekend with a drinky-poo or two at the Bell in Nottingham's Market Square. A distressed Ms Moon phones in from Wilford Lane which is clogged up with congested, standing traffic. - she ain't going to make it folks - Nottingham is gridlocked.

I peg it up Sneinton Hermitage and pop into town. There's a pub I want to check-out and tick-off on Bridlesmith Walk, that Tony Mac has tipped me the wink on. A plaque was unveiled last week in Nottingham in honour of Herbert Kilpin, who was credited with founding Italian football giants AC Milan. Kilpin was born at the back of a butcher's shop on Mansfield Road in Nottingham. It was the 100 year anniversary of his death last Saturday. A bus and a bus stop carrying his name was unveiled by the Sheriff of Nottingham. He made 23 appearances for the Italian club in the late 19th Century and early 20th Century. 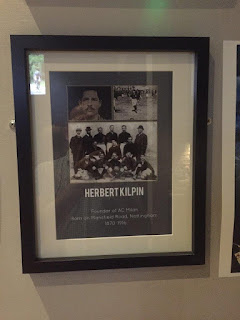 The Herbert Kilpin pub is adjacent to the pretentious Junkyard bar - where they sell you two-thirds of a pint. I admire the photo of Kilpin adjoined to the wall in the downstairs bar. I sink a couple of pints of 'Kilpin' (Black Iris Brewery) - the pub's signature ale. The Rolling Stones 1966 hit 'Paint it Black', with the haunting sound of the sitar, is bouncing off the walls. Ms Moon is chillin' on the new SCS sofa with a can of Strongbow, watching the latest happenings in Emmerdale Farm, when I finally return to base.

It was the 50th anniversary of the 'Aberfan Disaster' last Friday. As Ms Moon turns in for the evening, I tune into a heartbreaking documentary called 'The Aberfan Wives' Club' -  this was set up over 50 years ago, they meet up each week, to this day. The documentary is heartwarming and uplifting. 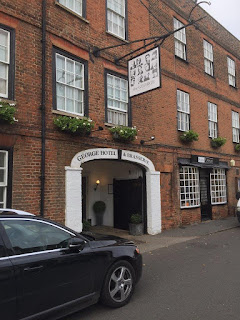 On 21st October 1966, at 9:15am, a build up of water on a colliery spoil tip caused 1.4 million cubic feet of slurry to slide down the tip covering the village of Aberfan in minutes. The local school was wiped out. 116 children and 28 adults lost their lives that day. Had the landslide happened half an hour earlier, the school would have been empty. The following day would have been the half term holidays - nobody would have been there.

The National Coal Board and the sloping shoulders of their chairman, Lord Robens, tried to absolve all blame. They even gained access to the disaster fund, using £150,000 of monies raised to clear up all the debris. They were found guilty of negligence and were wholly culpable - the money was paid back. Roebens never stood in the dock. I hear a radio reporter talking to a man (a boy at the time of the disaster). He says that he became an adult that day, as there were no other children to play with in the village, as they were tragically taken away. That thought sits with me for the rest of the evening and the ensuing sleepless night  - for him probably every day of his life. 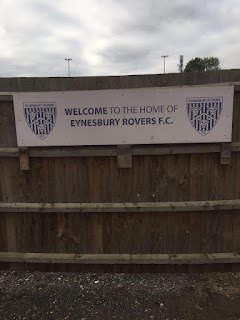 I end up kipping on the sofa, I just can't shift this flipping throat infection. They say an apple a day keeps the doctor away - what a load of old tosh. Murphy the budgie likes to share an apple with Sticky. But he always ends up spitting it out everywhere and getting himself in trouble. We've both kept our heads down this week, after 'Shoegate' last Saturday - when we accidentally threw out Hunters and Uggs to the value £400 - the lads at the tip were quaffing champagne all weekend.

I'm back down the tip again on Saturday morning, playing it safe, just disposing of old cushions from the settee. I call by Majestic Wines on Castle Boulevard. An overzealous shop assistant, behind the counter, has me sampling various glasses of Red. I exit the shop £40 lighter and with a slightly giddy head. We shoot over to Cambridgeshire just before twelve bells. 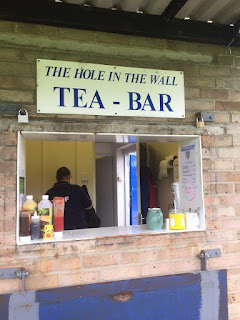 'The Skipper' (my youngest) is back from Uni in Leeds this weekend. He and his pals are at the Detonate Halloween Festival on Nottingham Racecourse in Colwick, across the road from ours. Last year, at the fag end of Detonate, I went to get some cash out from a petrol station just up the road. I found a youth dressed up as a banana, flat out on his back, inebriated - I asked him if he had slipped on his own skin.

The A1 is as clear as a bell. The leaves on the tree-lined carriageway are full of beautiful changing shades of colour. We bump up in the picturesque village of Buckden. We enter the stylish and lavish lobby of the George Hotel, with its leather and chrome chairs and log fire. I have a pint of Mosaic pale ale from the Adnams Brewery. 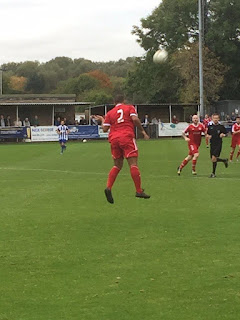 We relax reading the morning papers, occasionally people-watching. A haughty-taughty mother and daughter ask a nervous-looking young waiter if the hotel bar sells pear juice: "well if you don't dear, we'll have apple juice, is it cloudy ?" I feel like saying "bloody hell love, it's not real ale." Despite poring over the menu for a whole ten minutes, she announces to one and all, "we'll have the Crayfish ...... we always have the Crayfish."

The Alfred Hall Memorial Ground is 12 miles away. I wander up the stony path, past some ugly-looking flats, admiring the huge leylandi that tower over the ground. It's £5 on the gate and £1 for an excellent programme. The pitch is as flat as a pancake. I enquire with the gateman whether it's 4G or not - you could play Pot Black on it. 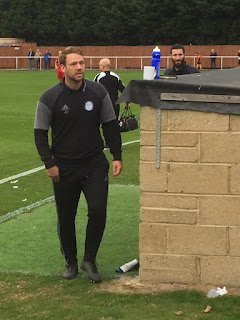 Ms Moon catches me chatting to an enthusiastic committee member in the corner of the bar. The World's laziest footballer, Olivier Giroud, is giving a post-match interview on TV - I doubt the bone idle sod has broken sweat, despite scoring a brace.

Over 2000 people will attend the Club's Annual Fireworks Night, a week on Sunday - a massive fundraiser for Eynesbury Rovers FC. Today's visitors are Peterborough Sports, who are said to have waved some lolly around. They have won 14 games and lost on the one occasion. I spot a 'Proper Hopper' clad in an old school Parka - his programme is safely secured in a plastic folder. Ms Moon has a good old moan when a stray shot in the warm-up catches her on the ankle - I phone up Murphy the budgie to retell the tale, we both have a good chuckle. 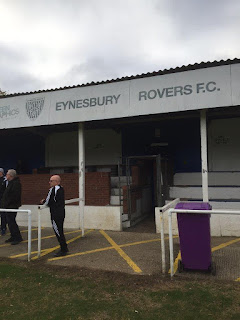 We stand to the left of the away dugout. They seem quite cocky and self-assured. The same cannot be said of manager Jimmy Dean, who is seriously pumped-up and focused on the task in-hand. I don't blame the guy, there's a lot at stake today.

Rovers take the lead from a hotly-disputed free kick. The delivery is perfect and met with a looping header at the back post. Dean is rocked and livid with his team, who are shaken by the goal, after having a lion's share of the possession. He keeps his cool, demanding more from his team, preferring to cajole and encourage, rather than kick them up the arse. Parity is restored, with Mark Jones on hand to blast home a rebound after a stinging shot is parried by the 'keeper.

There's a commotion just before the break, as a tackle flies in at the corner of the pitch where our view is obstructed. Our man 'Jimmy' queries whether the tackle is two-footed. He is bad-mouthed by a spectator, who is asked if he would like to continue the conversation in the car park afterwards. 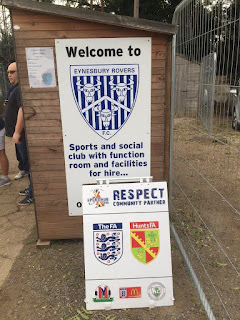 Sticky shouts up a steaming hot cup of tea at the break, Ms Moon has some bottled water. Jimmy cools off in the changing room. On his return he nods at me and apologises to us for all the swearing - we start to warm towards the guy. He makes valid coaching points throughout the game, swapping his wingers over. But the final ball either evades an outstretched leg or skims off someone's head.

There's a cruel twist of fate with five minutes of normal time remaining. For once Rovers' striker Allan Jones finds some space before unleashing a curling shot from 25 yards that hits the top corner of the net. The celebrations are memorable, with the home 'keeper Greygoose joining the pile-on close to home dugout.

Jimmy Dean sportingly applauds the winning 'wonder goal.' I also note he shakes every home players' hand at the final whistle. The man shows class, despite being bitterly disappointed with an under-par performance from the League leaders.

Man of the Match: Joshua Sanders (No.4 for Sports)