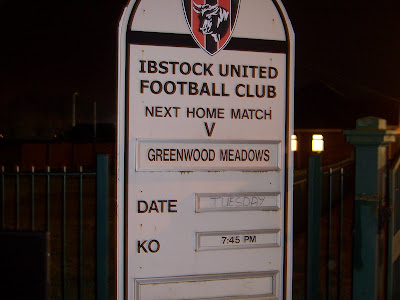 Boy have I been a miserable old sod this week. I’ve upped sticks and left the Tricky Trees, to cross the water to Meadow Lane. I said my goodbyes on Tuesday evening; I felt sick in the stomach and didn’t realise that people cared about me that much.

I’ve not felt like this since I was forced out of coaching my beautiful team 18 months ago. Lack of support and child protection issues were the reasons then. This time it’s my own doing. I’ve hardly eaten; I’m even off the ale. I believe in loyalty. I’ve only ever worked for two companies in my life. I won’t just put any old coat on, unlike some scouts, who just go from club to club. I don’t even like wearing club colours when I go scouting. I support Lincoln City, end of story.

Have I made a terrible mistake? Has it been a decision made on impulse? Well the damage has been done and there’s no going back.

I went for a look round the set-up at the centre of excellence. They’ve done an incredible job to get it back up and running. My immediate boss is a guy called Mick Leonard, who made over 200 appearances in goal for ‘The Pies’ in the 80s.

The Groundhopper certainly will become a watered down blog next season. I will probably do a game once every two weeks on a Saturday, and perhaps try and get some cheeky midweek games in whilst the night’s are light. 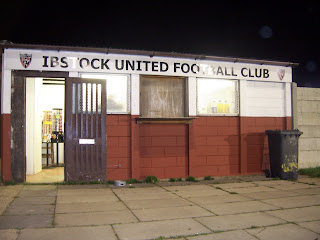 It’s only the thought of watching Channel 4’s trilogy Red Riding Hood that has kept me going this week. Mrs P has been unable to handle the dark, cynical moments that David Peace’s dramatisation has thrown up. She’s hit the wooden hill at 9.30pm every Thursday and left me on my Jack Jones to slug out this gritty, northern epic.

I’m not feeling it tonight though, and have to crank myself up for the visit to north Leicestershire. Greenwood Meadows always put a smile on my face. I rate their management team: Mark Connors, Nev Sillcock and Horace.

I’ve a mate at work called ‘Cheese.’ He lives out Coalville way and has fixed me up to meet with a guy called ‘Scottie’ who’s involved with Ibstock.

I hit the A46, navigate my way onto the A511 and finally onto the A50. Ibstock is in an area of north west Leicestershire which was once well known for its coal mines. The name Ibstock is a derivative of `Ibestoche` meaning the dairy farm of Ibba. It has a population of just over 5000.

It’s a desolate old place and could do with a spruce up. I’m not sure how much coalfields community money has been spent here.

There are a number of teams from around here who also ply their trade in the East Midlands Counties League: Ellistown and Bardon Hill are amongst them. 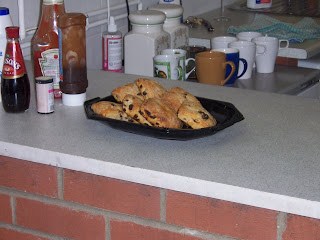 I park the car up outside the Bowls Club. It’s £4 to get in and £1 for a programme which is a fair effort.

There’s sad news in the programme, some scumbags have burnt down the garage, taking with it three lawn mowers and a line marker.

Greenwood Meadows are tonight’s visitors. Along with Dunkirk, they are Sticky Palms favourite two in this league. I saw them beat NCEL outfit Teversal in a penalty shoot-out back in October; they’ve hardly won a game since.

I nip into the tea bar and enjoy a bit of banter with the girls serving. Tea is poured from the pot and had it not been luke warm then I would have marked it with an eight. The girls have made some rock cakes which should go down well at half-time.

I stand with Mark, Nev and Horace for the first 25 minutes. Greenwood are sporting their Norwich City colours; Ibstock are more like Stoke City in appearance. 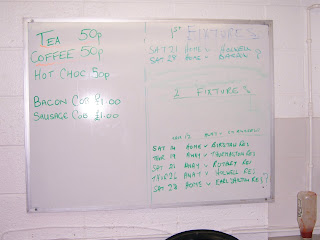 Both teams look well drilled and want to get the ball down and play. But they both struggle in the final third, where the final ball is often lacking.

‘Coops’ the Ibstock left winger has got great balance and quick feet. A lad I picked up for ‘The Pies’ a few years ago, Craig Meakin is playing for Meadows tonight; he’s what you call a street footballer. His shirt’s hanging out and he’s gelled up to the hilt. He’s got it all on tonight and has to track back to keep ‘Coops’ in check.

I spend five minutes retrieving a stray ball, which has cleared the perimeter concrete fence and nestled itself in a holly bush; I’m cut to ribbons and throw the ball to a mightily relieved Ibstock sub.

There’s a hunger about these two teams; they all want it. It’s ten times better than the garbage I saw on Saturday. I’m stood behind the Greenwood goalkeeper’s goal when the Ibstock winger miscues a cross. The ball is level with the floodlights and the goalie is having to back pedal. He swears under his breath as the ball fortuitously bounces off the top of the crossbar. 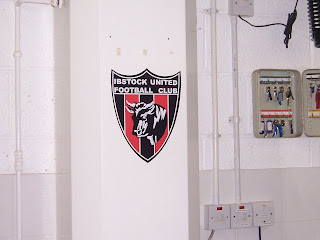 Greenwood are beginning to apply some pressure; they’re a side with pace. Incredibly their forward Jordan Blair smashes the ball against the underside of the bar from ten yards out.

There are only 21 people here, and not many are hanging about for a chat at the break, so I slip into The Welfare to try and keep out of the biting wind. They’re coming off the pitch at The Emirates Stadium, Hull City are one to the good. There appears to be an altercation between members of both management teams in the tunnel. There are a few toys out the pram; it’s mainly finger-wagging.

I don’t bother with a drink and head outside again into that bitterly cold wind. I have a chat with Nev Sillcock during the second half. He’s telling me that they’ve lost a few players since their cup win up at Teversal. People work during the week so you never at your strongest for night games.

Ibstock look a lot stronger in the second period as the Greenwood young guns begin to tire. Ibstock fail to test Meadows’ ‘keeper Farnsworth despite having a stiff breeze behind their backs.

White Van Man has already phoned in twice from The Dovecote to brag he’s seen a couple goals from Shepshed, who are entertaining Stocksbridge Steels this evening. He’s chortling away to himself that I look to be witnessing my second 0-0 in three days. 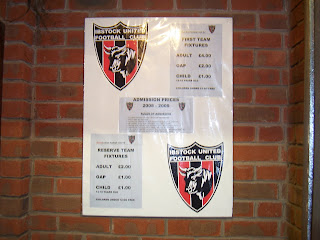 Stoic defending by young 18 year old Kieran Walker at the heart of the Greenwood defence prevents the Ibstock attack from making headway.

The game peters out to another 0-0 for The Groundhopper. At least I have seen some effort and desire from both sets of players, unlike Saturday.

White Van Man is hammering my phone for the final score. I put it on silent. The last thing I want to do is talk to that clown tonight.

Man of the Match: The Little Asian referee.
Posted by Sticky at 10:33 PM

Off the ale Sticky ? Bang goes our long awaited afternoon in The Stratford for a gallon and a baguette.