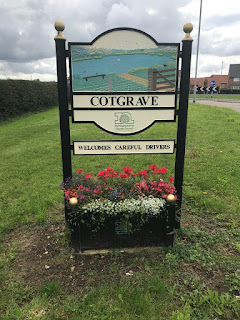 Wythenshawe Amateurs win hands down the most-friendliest Club I've visited in years. I hope to catch Mike, Arron and the 'Ultras' again, later in the season. A tasty Boxing Day local derby versus 'noisy neighbours' Wythenshawe Town is on the radar.

Sat Nav takes me home over Woodhead Pass. The views are stunning; the area is isolated and vulnerable to the elements. I listen to 6-0-6 with Alastair Bruce-Ball and failed ex Lincoln manager Chris Sutton - he's certainly better at punditry. I call by The Brickyard pub on Carlton Hill, a favourite Lincoln Green hostelry of mine. I partake in a pint of LocAle before turning in for the evening. I fight off the sleep as long as I can during Match of the Day. 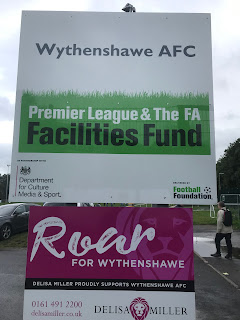 I knock out the blog on Sunday morning of my solo trip away to Lytham, Blackpool and Greater Manchester. I jump on the NCT No.27 bus to Nottingham, alighting at King Street. Yates's Wine Lodge has recently been re-opened as a Slug and Lettuce (not my usual choice of pub). I've fond memories of Yates's from back in the day, with its grand staircase and view from the balcony. A mate of mine, 'Wrighty', a legend in Keyworth folklore, used to sink double figures in sweet-tasting Aussie wine before spray-painting the urinals (if he managed to get there in time).

I push open the front door of the Slug and Lettuce on Long Row. All the dining tables are squeezed tightly together; there's no room for manoeuver. Kids are squealing and the decor is painted in a turquoise and pink - it's like something out of Lewis Carroll's Mad Hatters Tea Party. I stand at the bar with a face like thunder for over ten minutes, unattended. I ask for a pint of Goose Island when a half-arsed barman finally wanders over. "We've ran out mate." They've no real ales or craft ales on. I about-turn and head out of the door in a fit of pique. 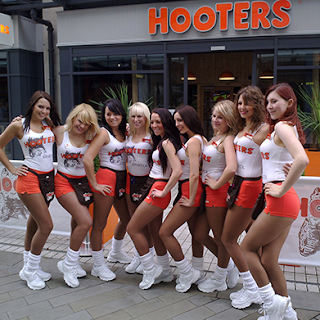 I've arranged to meet my childhood friend 'Keebo.' We bump into one another in Market Square. I suggest the Bell Inn for a few quiet sherbets. A jazz band is tuning up in the bar. We retire to one of the snugs, where I enjoy a few pints of Aurora from the Pheasantry Brewery based in East Markham, Newark.

I slope off at six bells, conscious that I've my blog to publish. Sunday dinner is spent at Five Guys. My delicious burger (Scooby Snack), smothered in countless toppings, is devoured at home. It's lights out at 10: p.m. The forecast for the week ahead looks bleak. Whilst Ms Moon is in Tenerife lapping up the sunshine, all local football looks like being watered off. 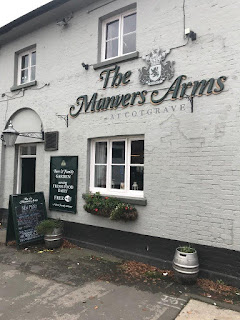 The 'Ideagen Baby Squad' - the ‘Inside Sales' team - have kindly invited me (I begged to go/gatecrashed) to Hooters on London Road on Monday evening for the Arsenal v Manchester United game live on Sky. 'Our Joe' works at Ideagen too. I don't want to cramp his style, but he seems pretty chilled about me coming along.

Whilst the lads' eye-up scantily-dressed serving staff (in this day and age?), Sticky Palms can't keep his eyes off the game - apart from a dour first half an hour, what a cracking match it is too, although it seems  trendy to slag off these two fallen giants on social media and TalkSport. 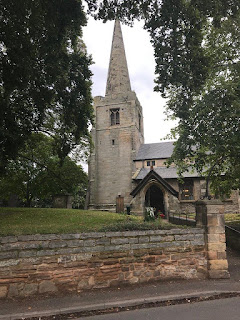 'The Arsenal' play a beautiful game of football, but a draw is a fair result. I wipe the sweating brows of the Squadron, caused by the 911 chicken wings (and not the waiting staff) - I pop another blood pressure pill, as neither are healthy to a man in his mid-50s. I find out in the morning that 'Our Joe' and a few of the lads had a late night out in town (on a Monday). Apparently, it's Freshers' Week  ..... lol.

I live the life of an armchair supporter all week. The weather is doing my duck in. I swerve the Ilkeston Town v Wisbech Town game, having seen two goalless draws at the New Manor Ground this season (fuming folks). I cook a Chilli con Carne. Don't ask me, but I somehow manage to get some hot chilli powder in my eye. It's flipping Schwartz too, top of the range, and it flipping stings. I watch the Spurs v Bayern Munich, Champions League game through one eye; bathing it throughout with a cold, dampened Jeyes cloth. I know how Lord Nelson felt now when he lost a 'mince pie' in Corsica. 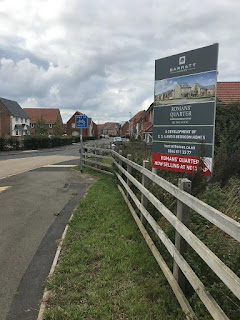 I have a 'Mike Baldwin' moment at Carlton Tesco on Wednesday evening. I park up to the rear of the store and dash through the double sliding doors. Hobnobs are on offer at 75p; I love dunking them in my Yorkshire Tea. I wander out of the store, admiring the late, warm, autumnal, evening sunshine. I walk up the road and notice Ms Moon's car parked up on the driveway. Where the heck is my car? Someone's nicked it. Oh, hang on a minute, no they haven't, it's still in Tesco car park. I unload my shopping before traipsing back down Carlton Road to collect my car. I watch Liverpool surrender a three-goal lead, before they inch over the finishing line in a seven-goal thriller at Anfield against Salzburg.

Thursday is the final day of 'Armchair Viewing Week.' I've struck lucky so far. Jesus wept, Man Utd play out a 0-0 at 'The Hague Powerleague' versus AZ Alkmaar. They are second best throughout the game and fail to register a shot on target. 'The Arsenal' are different gravy in the 8 p.m. ko versus Standard Liege of Belgium. 18-year-old Brazilian striker, Gabriel Martinelli, bags another brace, whilst 22-year-old Isle of Man born Scottish left-back, Kieran Tierney, impresses with his energy and skill on the left flank. 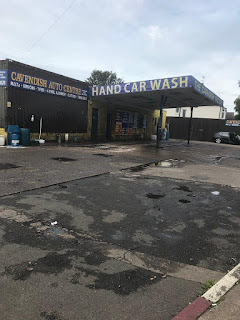 I have a mass tidy up on Friday teatime as Ms Moon boards the TUI flight from Tenerife South to East Midlands Airport. I shoehorn enough time in for a couple of jars at The Brickyard. Birmingham City are playing Middlesbrough at St Andrew's, and it's live on TV. I'd shut the curtains if those two teams were playing in my back garden.

I wake up to the news that Notts Police have surrounded the Premier Inn at Hucknall. I quickly get on Facebook to see if Trumpy Bolton has checked-in there and has kicked off that the bar's not open yet. It turns out that a suspected armed robber is holed up there. 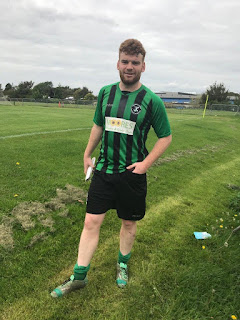 A tanned and fresh Ms Moon is back from 'the Reef.' She fails to make the team coach for the short trip over to Cotgrave. I get the car washed and valeted by the eastern European lads on Cavendish Road before visiting Tesco for the umpteenth time this week.

I zip through Burton Joyce, start booing loudly in Lowdham (their kids' team were horrible when I coached) before hitting the A46 towards Leicester. I turn off at Stragglethorpe that leads onto a road where Forest legend Stuart Pearce had a nasty accident with a dustbin lorry here back in 1998. 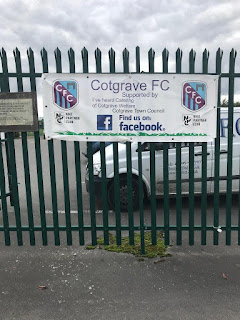 I park in Sainsbury's to grab some lunch and a bunch of flowers. I walk past the stunning All Saints Church before opening the gate of the cemetery. The 1990s were halcyon days for Keyworth Cricket Club. Two lads from Cotgrave played a major part in this renaissance. Barry Newby and Tony Newby were both talented footballers and cricketers. I once saw Tony take two corners in a minute with different feet - many Prem players couldn't do that, Marcus Rashford for one.

I loved Barry to bits - we all did. 'Biff' was a brilliant 'keeper/batsman. It was a privilege to be in the slip cordon with both him and his brother, Tony. Each batsman, on arrival to the crease, was greeted with a string of gags and Mickey-taking. 'Biff' was struck down with Motor Neurone Disease which he battled with courage, bravery and humour. The village of Cotgrave turned out in their droves at his passing at the age of just 39 years old. I lay some flowers at his grave and shed a tear at a photo of him wearing an England cricket shirt. Biff was a massive Sunderland fan. He came with Dad and me in 1999 for an FA Cup 3rd Round tie at Lincoln City. Ironically, today, the two teams meet for first time at Sincil Bank since that day. 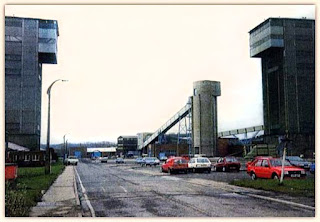 I feel sombre and sad as I peck on my sandwich in the Welfare car park. Both teams are warming up as I walk through the gate. I sit on a wooden bench out of view. The lads won't need firing up for this game. 'We' (I was the manager) lost in the League last season at Platt Lane; it was a miscarriage of justice. Two of my lads got sent off for dissent when ten minutes in the cooler would have sufficed. I kicked them out of the changing room and out of the team. I didn't speak to the pair of them for a month.

We lost 2-0 at Cotgrave in the semi-final of the League Cup too. I was long gone by then but take full responsibility for that defeat. Hopefully today under Steve Cullis's tutelage we can reverse the hoodoo. 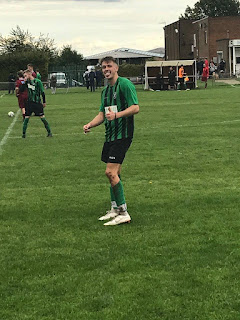 News is reaching me that 'The Keyworth Georgie Best' isn't in the starting line-up. His little brother starts in centre midfield. It's a sloppy start by the Keyworth young guns. Ten of the eleven starters have come through a youth system that in the past has been neglected and ignored. Gone, have the days, thank God, of the Club shipping lads in from far and wide. After all, it's meant to be a Community Football Club.

The Green Army boss the midfield, with the lung-bursting runs of Sam Lund and the uncomplicated and simple passing from Wood and Palmer. 'Woody' could slice open a can of beans with his right peg. They race into a three-goal lead, with Sam Clements's goal being the pick of the bunch, after a mesmerising passage of play. 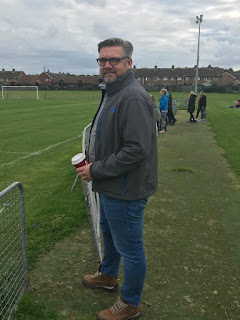 The Cotgrave 'lino' has raised his flag more times than the starter of the Grand National horse race. He comes off with arm ache at the interval. I've hooked up with Keyworth Cricket Club legend 'Big Bear Baker.' He's impressed with what's on offer. Cotgrave claw one back and have another one chalked off, ironically, for offside.

Late strikes from Clements and Pauley put the game to bed. The Ressies play some champagne football and pass the home team (top of the table) off the park. I shake hands with Steve Cullis after the game and congratulate him on a top-notch performance.

The lads are in safe hands and give their all. That's what happens when you bring them through. They play for the badge, honour and with their hearts. As Sir Matt Busby once said, "If they are good enough they are old enough"

Man of the Match: Sam Lund
Posted by Sticky at 6:43 PM