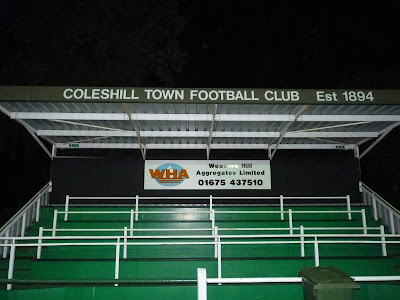 It’s 28th September 2009. Lincoln City, the team I’ve followed all over England for 40 years, have been managerless for over three weeks now. An appointment is expected this morning.

The smart money is on former Crewe, Sheffield United and Crystal Palace defender John Pemberton. He has had a good upbringing with Dario Gradi and Paul Hart. He was well respected at Nottingham Forest as a coach with the Academy, Reserves and 1st team.

My phone goes off. The news is unexpected. I nearly choke on my Penguin biscuit. Those fools on the Lincoln City Board of Directors have appointed Chris Sutton as manager.

He has no managerial pedigree. He comes across as arrogant and unapproachable. He once refused to play for his country (I always like to get that one in). I can’t imagine him going out scouting on a wet, windy Wednesday evening.

He uses his contacts though. Young, fresh blood is injected into the team from Aston Villa and Fulham. I doubt he’s ever seen them play. Probably took someone’s word for it. 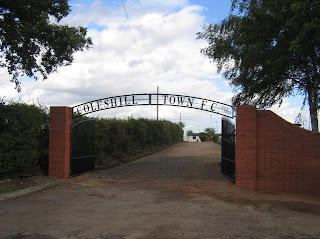 His sidekick is Ian Pearce, who he played with at Blackburn Rovers. The pair of them spend more time in the stands, than the dugout.

I’ve already made a decision not to go until these pair of jokers are off the payroll. We survive relegation by six points. Leeds loan striker, David Somma’s, nine goals in fourteen outings keeps ‘us’ up.

The usual assortment of Bosmans and rejects roll up at the Club during the summer.

We make a dismal start to the new season. Goals are hard to come by; there’s no Somma to bail us out this time. A thumping at Accrington and a loss to Stevenage are the final nail in the coffin.

Sutton walks out on Lincoln, like he did on England over twelve years ago, citing personal reasons. 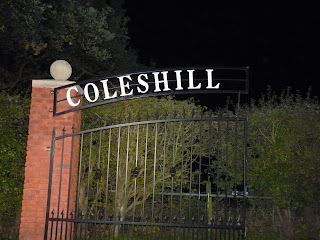 There was no rhyme or reason (unless it was investment) for appointing this fool. He had no interest in the club’s centre of excellence, even sacking a loyal servant who had helped produce such gems as Jack Hobbs, Scott Loach and Lee Frecklington, whose inflated transfer fees kept the club afloat.

It’s Sunday night. Mrs P has her eyes firmly fixed on the X-Factor Bootcamp. Cheryl Cole is releasing a few on Bosmans. I’ve already tipped the winner a few weeks back – some lad from Blackpool, who sings a bit like David Gray.

Anyway, this Zimbabwean lass can hold a few notes. It’s a formality that she’ll go through. Cheryl has to break the bad news. Mrs P is off the sofa, shaking her fist at the Geordie temptress. I haven’t the heart to tell her that Gamu Nhengu is an illegal immigrant.

I ring up The Taxman to sort out the travel arrangements for tonight’s Midland Alliance clash in Birmingham. He’s just come back from a trip to Asda and has proper got it on him.

We had planned on a soiree in the West Yorkshire town of Garforth. Word had spread that flawed genius, Paul Gascoigne, was to be appointed manager of the Unibond Division One North team. It appears that the ‘News of the Screws’ have jumped the gun. 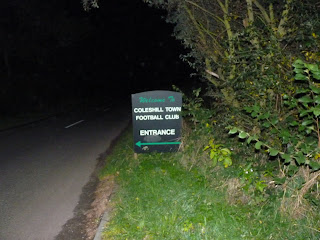 I wake up Monday morning in a depressive state of mind. I’ve had a disheartening weekend on the talent-spotting front. The bloody weather hasn’t helped.

Finley Palmer always cheers me up though. He might escape from his cage, go missing in action or refuse to go to bed, but what a character he is.

Finley loves his non-league football and certainly knows his onions. I ask him to stop chewing on my shoelaces and to concentrate on predicting tonight’s scoreline. He takes into account Coleshill’s thumping of Lincoln United in the FA Cup and their recent victory at high-flying Coalville Town. He predicts 3-1 to the Warwickshire side.

I’ve perked up by the time The Taxman picks me up at 6.20pm. I’ve had my hair cut at the newly-opened Flynn’s Hairdressing in Ruddington. I’m showered up, gelled up and dressed to kill (H&M prison-issue hoodie).

The Taxman is in sparkling form. He’s going away with some pals to Norfolk tomorrow for three nights. I’m already missing his moaning and groaning. 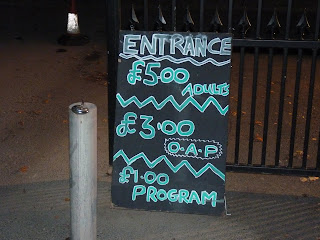 The Taxman overtakes a vehicle for the first time in five years on the A60. Admittedly it’s a cyclist, but hey, it’s a start.

We see a Boots lorry heading in the opposite direction. Their Nottingham HQ has announced that 750 white collar jobs are to be lost earlier today.

We’re in the market town of Coleshill within the hour. A few chavs are milling around the town’s famous coaching inns on the High Street.

Just over 6000 inhabitants live in the town, which is named after the nearby River Cole. The Market Square is the location of the town’s Pillory and Whipping Post. Historically these were use to punish drunks and bakers who sold underweight loaves. It was a wise decision not to bring Trumpy Bolton this evening.

British-Jamaican poet, Benjamin Zephaniah, was born in the town. He famously turned down an OBE in 2003. He was voted, in 2008, by The Times, as being in the Top 50 post-war writers. 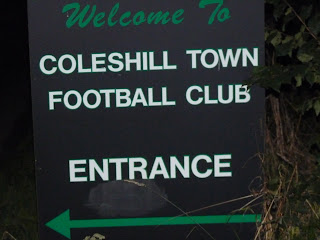 The Sat-Nav takes us down a cul-de-sac and into a farmyard: We haven’t got time for a cup of tea with The Archers. Minutes later we are at Pack Meadow.

It’s £5 per man and £1 for a cracking programme. We park up behind the stand. I’m still trying out ‘The Architect’s’ camera for night games, but to be brutally frank readers, I’m bloomin hopeless (sorry for the whack photos).

We’re queuing for tea as the players exit the changing room. Coleshill Town were founded in 1894. Former Aston Villa striker, Gary Shaw, was picked up from Coleshill at 16 years of age.

The Taxman phones his lad up to make sure he’s completed his French homework. Sticky Palms checks in with Mrs P to be told next summer’s holiday in Ibiza has been finalised.

Dunkirk’s pace in the final third is already causing panic in the home defence. Lavell White, Jarrod Westcarr and Theo Smith are too hot to handle for most in this league. 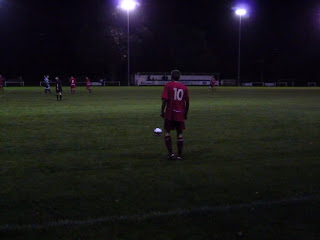 The two teams’ colours are similar to Plymouth Argyle and Swindon Town.

The Boatmen take the lead on 20 minutes. Ross McCaughey punts the ball forward, there’s miscommunication between the ‘keeper and defender. The ball glances off Edwards’s head and is ushered into an empty net by White.

Coleshill create a few half chances, but Dunkirk go close again when their play-maker, Darren Garmston, flashes a shot just wide of the upright.

We have a potter around the cosy clubhouse at the break. We purchase a cup of tea (no teapot in the vicinity) at the Tuck Shop for 70p per cup. The toilets are not Armitage Shanks and the hand drier is out of use. 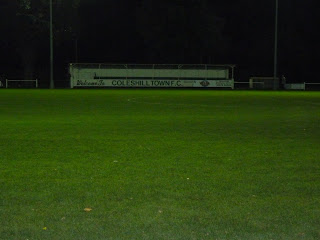 Dunkirk are dangerous on the break, as the home side increase their risk-taking. Theo Smith is wreaking havoc down the Dunkirk right. Coleshill’s left back receives a caution for upending the youngster. Smith has a shot beaten away.

A couple more chances are spurned by the Greens, who are finding the Boatman ‘keeper a more confident custodian in the second period.

We’re stood near ‘Uppo’ (Dunkirk joint-manager). He acknowledges me. He has razor-sharp wit, which has the pair of us in stitches, but he’s less than impressed with the fussy officials tonight. But he has to learn to get them on his side. He chips away at them, as frustration creeps in. 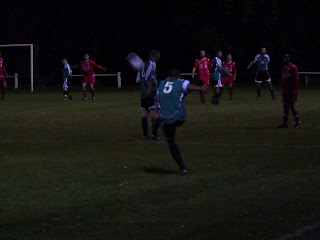 Suddenly Uppo’s phone goes off. There’s trouble at mill. It sounds like they’re struggling to change a barrel of beer at the pub he runs on the outskirts of Nottingham. This diminutive character takes it in his stride.

Dunkirk roll their sleeves up for the final moments. Westcarr rolls a shot inches wide of the post, when clean through on goal. The excitable referee finally blows for full time. ‘Mystery time’ has felt like an eternity.

Man of the Match: Uppo

Got a player you might be interested in. Rejected by Rotherham and released by Chesterfied but still a very good player. If you're interested just leave another comment and I will give you more details.

He plays for Somersall Yellows in the Rowsley league, which is based around Chesterfield. He's playing at Brookfield Community School on the 17th of October, kick-off 10:30.

What did you make of this starlet Stickster ?? Lets hear your scouting opinion.