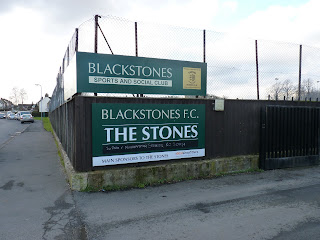 It’s Sunday lunchtime; we’ve just spent a horrible morning at Vernon Park in Nottingham. ‘The Skipper’ has lost his fifth semi-final in less than 12 months. On the adjacent pitch two pub sides have been involved in a mass brawl. The emergency services have arrived to deal with the offenders. It’s in full view of 12 year old boys. What an example to set.

We arrive home. I walk out the back door. He’s on all-fours begging to be let out of his cage. I’m talking about Finley Palmer, our pet rabbit. Regular readers will know that 6 months ago he escaped from my clutches and spent a night out on the town. He turned up the following morning looking sorrowful and mournful.

The Rabbit Court issued a five month ASBO order. We’ve barely spoke in months. I’ve fed and watered him, and cleaned his crib out each week, in total silence. We’ve not shared any football predictions; I’ve not given him any special treats: I’ve proper blanked him. 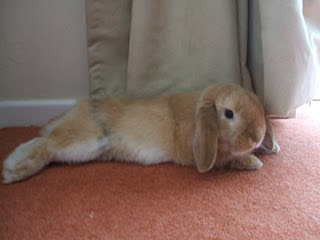 But it’s time to forgive and forget. I lift the lid off his cage and plonk him at the top of the concrete steps. He shakes his head in disbelief, hops down the stairs, scurries to the bottom of the garden and dives under the shed.

It’s a full hour before he re-emerges. We entice him out with a carrot. I’m flipping fuming. I’ve had to act as a lookout, whilst listening to Mrs P’s i-pod by mistake. An hour of Westlife and Boyzone has sent me stir crazy.

I place Finley back into his crib. It will be late August before he makes another appearance in our garden again.

Highlight of the week was on Tuesday night when I sloped off on my lonesome to watch Greenwood Meadows entertain Holwell Sports, from Melton Mowbray, at Lenton Lane. I love watching Greenwood with their high energy and amusing manager Nev Silcock. 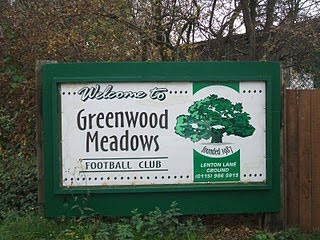 Nev and his coaching team were in a grumpy mood. The wisecracks were replaced with perpetual moaning and whining. The poor old referee was bearing the brunt of it. Come on Nev, cheer up, you won 3-1.

Sticky junior is sleeping over at a mate’s house. Poor old Groundhopper rises at 6.30am to carry out junior’s paper round. Events in Egypt dominate the front pages. The Daily Mail chooses to bleat about women’s pensions.

I’ve got one helluva of a day in store. First port of call is to watch the Notts County under 8s in a practise match at the University Grounds. I view proceedings and have a bit of craic with the coaches, before walking back to the car.

I say good morning to Mick Leonard, Darren Davies and Youth Team Manager, Michael Johnson – the U18s are playing Burton Albion at the same venue. I notice a lad from Nottingham is trialling out for the Brewers. 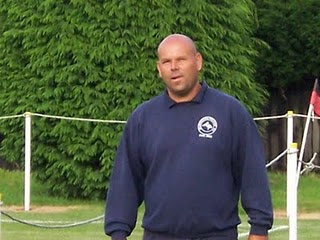 Next stop is Bilborough Pelican FC’s ground, which is at the end of Lenton Lane, and is shared with Unity Casuals Cricket Club. The football pitches are tendered and loved by Nottinghamshire 2009 Groundsman of the Year and blog favourite, Neil Swift. When the children were younger we had a photo of Swifty on top of the fireplace; the kids never got burnt once.

Swifty bollocks me for not mentioning him in the blog recently. His girlfriend is a manager at the Co-op. I’m hoping she’s good for some discount off a bottle of red wine. He’s in full flow now about the art of growing grass; it’s a good cure for any insomniacs out there.

‘The Skipper’ is playing at Swifty’s ground. It’s David versus Goliath. I fearful of a cricket score and have agreed to help our coach during the game. It’s our cup final. I had asked the lads if they wanted to get measured up for a ‘whistle and flute’ so we could have a stroll up and down the snooker table type surface that Swifty has nurtured.

“Oi, you lot, get off the bloomin pitch” shouts a red-faced Swifty. We settle for Plan B and go into the changing room for a pre-match get together. 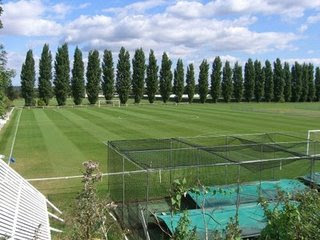 We manage to hold out for 25 minutes before the inevitable avalanche of goals. ‘The Skipper’ is off his game today, I think he found the pressure cooker atmosphere a touch too hot. I’m hoping we can relax a bit more next season in Division 2. And that the lads can gel and enjoy the fabulous facilities that our Club at Keyworth have built.

I say au revoir to Mrs P and race back home in the ‘Rolls Royce.’ There’s time for a quick wash and change before nipping round Rammers’ house. Wayne Rooney has just put ‘United’ one up in the Manchester derby.

Rammers is a legend on the Midlands non league circuit. He has managed and coached at more clubs than Gary Megson. It’s unbelievable with his fountain of knowledge and fully qualified UEFA Licensed badges, that an opportunity has not arisen this season.

I’m not complaining though because John is good company. He tells a tale of a sparrow hawk that swooped down into his garden earlier in the week, and lifted a shrew out of some shrubs. Unfortunately for Kes, John’s cat, Georgie, was on sentry duty on top of the garage. He leapt into the shrubs and flattened the hawk. 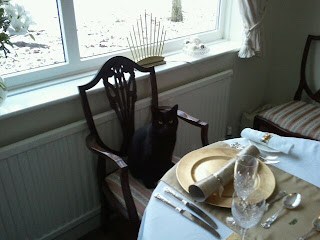 Despite John’s best attempts and a call to the RSPB, the hawk was declared dead at the scene. I will have to warn Finley to be extra vigilante next time he stays out late, as Georgie lives at the back of our garden.

Rammers says there are temporary lights on the A606 and that Melton Mowbray could be a logistical nightmare at this time of day. He takes me on a supposed short cut. I’m not saying we have gone out of our way readers, but I’ve had to stop twice for petrol.

After a ten minute drive around the beautiful, historic town of Stamford, we finally find Blackstones’ Lincoln Road ground. 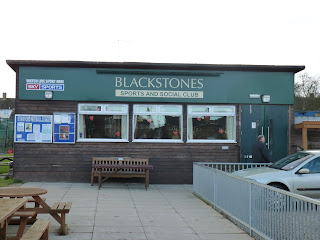 I stick the ‘Rolls Royce’ on a side street, smack opposite the ground. We stroll towards the entrance and are met by a couple of friendly officials. It’s £5 each for entry including a programme (thanks John). Rammers also snaffles up a couple of strips of raffle tickets.

Stamford is a town in the county of Lincolnshire with a population of 20,000. The infamous Daniel Lambert died in Stamford in 1809; he weighed in at just over 52 stone. He used to travel the country exhibiting himself. He died suddenly in the bedroom of a public house. They had to knock the wall down to get him out. It took twenty men to lower him into his grave.

Other well known folk born in the town include: the author and creator of Inspector Morse, Colin Dexter and former Middlesbrough and Derby County striker, Malcolm Christie. 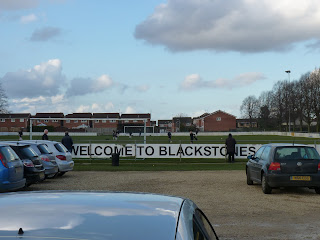 I‘m immediately impressed with the ground. It has the feel and look of a village recreation field. The Social Club is behind one goal, with a housing estate bordering the other goal. On our left is an old stand with green wooden seating, with further covering down the touchline. Opposite are the two dug outs, with older terraced housing behind it.

We have a quick peek in the Club. I have a can of coke and notice that most eyes are on England playing rugby.

It’s turned into a gorgeous day as the teams await the kick off. The waft of smoke from a bonfire hangs in the air. 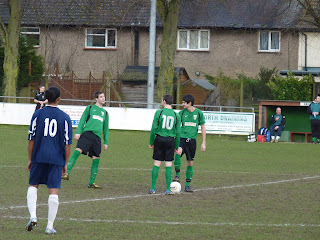 My first observation is how excited the Northampton Spencer bench become when the referee has to make a decision. We decide after a dull opening to walk over and study their staff.

Spencer look the more stylish team. The athleticism of their front two asks questions of the Stones’ defence. Former Leicester City youth player, 19 year old Romanian, Claudiu Hoban, has already crashed a shot against the crossbar, with the rebound being headed over from six yards by the Number 10.

Against the run of play Blackstones take the lead. The away side are too busy arguing about another decision from the ref, to notice a quickly taken free-kick has sent Addie Staffieri motoring down the wing, his cross is bundled over the line by Elton Holmes. 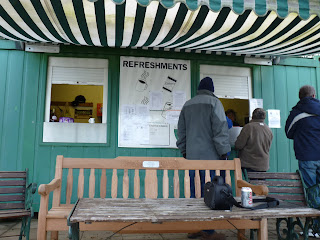 The Spencer bench pour scorn on the officials. I remark to their small, rotund coach that his side switched off. He replies with hatred in his eyes: “What the f**k do you know about football?” To which I reply: “I know one thing mate, you’re losing 1-0.”

The queue at the Refreshment Bar shows no sign of easing. The guy pouring tea doesn’t appear hurried. I notice a sign advertising for a Groundsman. I’ll tip Swifty the wink.

Spencer do a warm-up routine before the second half. It reminds me of something Brian Glover did as the football mad sports teacher in the 1970 film Kes. 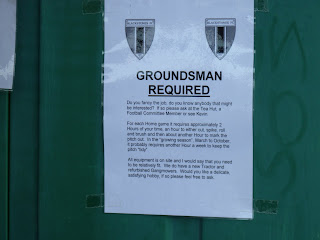 A filthy black cloud is hanging over the ground. We watch the beginning of the second half in the ‘Main Stand.’

We take another stroll. I expect Spencer to push on and win. Remarkably Blackstones spurn a couple of chances to extend their lead.

We’re stood behind the goal when Hoban swings in a left footed free kick from the right hand side. Blackstones ‘keeper misjudges the flight, the ball clips the underside of the bar and drops over the line.

Rammers is checking out a huge shed in one of the gardens, where a guy keeps his pigeons. I’m taking a few snaps of a couple of roosters who are strutting in the undergrowth. 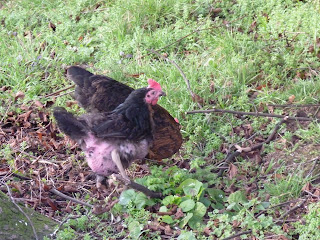 Spencer have thrown on a sub who looks older than me. He somehow bundles the ball over the line with a shot that Mrs P could have scored with. It’s enough to give the visitors the win they deserve.

Blackstones miserable day is completed with the dismissal of Holmes for a second yellow card. I finish the day talking to Northampton Spencer’s solitary away supporter. Even their committee aren’t here today.

Attendance: 73 (one away supporter)

Man of the Match: Georgie Ramshaw.
Posted by Sticky at 9:17 PM

Surely the donut doing the balancing act in the centre circle deserves a shout out !

Has Rammer ever told you the story of how he got Dion Dublin to join him and play at Oakham Utd, that is well back in the day, this even before Dion went to Norwich(I think it was Norwich), Cambridge and then fame and fortune at Man Utd to star for England!!??