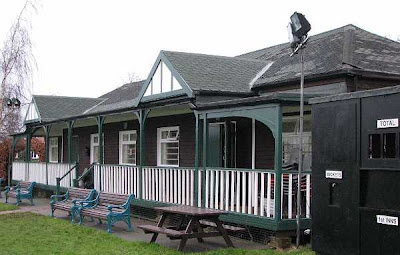 It’s Wednesday evening and I’m driving Sally Gunnell home through a snow blizzard. I struggle up the hill towards Keyworth. I’m relieved to finally reach our road – it’s only a 4 mile trip but Sticky doesn’t like driving.

I put Sally in the garage; she’ll be nice and snug in there. I walk around the back passage of the house. For a minute I thought I’d spotted the abominable snowman. I take a second glance.. How stupid of me. Of course, it’s my furry, shivering little pet rabbit, Finley P.

He’s covered in snowflakes and is not a happy chappy. Unfortunately, for him, he’s serving a lifetime ban from being in the house, following an unsavoury incident involving Finley’s gnashers and the Sky TV cable. It ended up with an onsite visit from the NTL engineer. Mrs P was judge and jury. 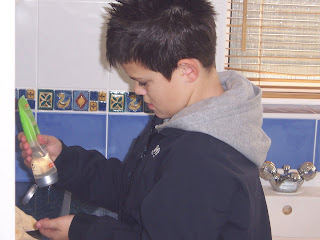 But Mrs P is at work readers. She’ll never know if the youngster has one sneaky soiree in the lounge again. Sticky junior is dispatched to Finley’s crib to collect the wee man. He’s scurrying about the house and thawing out nicely. It’s all going to plan. Suddenly there’s a crunching noise. Bloody hell, he’s only found an over-hanging computer cable and took a huge chunk out of it. It’s the third red card in his short career. He’s well on track to equal Steve Walsh’s Football League record.

‘The Skipper’ is in a relationship (as they say on Facebook). It’s not just any old relationship. He’s hooked into a beauty. Her family are ‘Local Food Heroes.’ Apparently their family butcher firm is celebrating its 25th year. We’ll never have to pay for a Sunday joint again, folks. I think we’ll have a nice piece of pork belly this week ‘Skipper.’

It’s Friday night and poor old Groundhopper is feeling it. A few hours ago I had a bigger hole in my tooth than D****y County have in their defence. The numbness from the injection has faded. I crack open a Stella to celebrate. 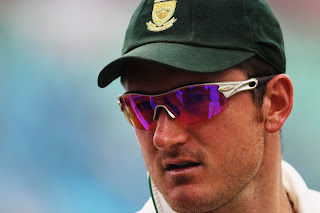 I turn on Sky Sports News. Rafa Benetiz has produced another scrap of paper from his pocket and is apologising to the City of Liverpool. I joke with the kids that the paper is really his weekend shopping list. “Yeah, he’ll be nipping to Londis when he leaves the Melwood training ground lads,” I say. “It’ll say: Fact, paella. Fact, tapas. Fact, omelette. Fact John West sardines. “Shut up Dad” they pipe up.

Suddenly we’re all booing and hissing at the TV. The most despicable man in sport is on the box, denying he got an edge on a Ryan Sidebottom away swinger. There’s no place in our house for South African skipper G****e Smith. Lucky Finley wasn’t in the room, he’d have jumped through the TV set and Glasgow kissed him.

It’s Saturday morning and Sticky’s flapping big style. He doesn’t want a blank Saturday and pines for the non-league scene. I’ve Burton Albion or Doncaster Rovers up my sleeve, but events hinge on a 10.30am pitch inspection at the Wollaton Sports Association. It’s a re-visit, but what the hell, I love that club. 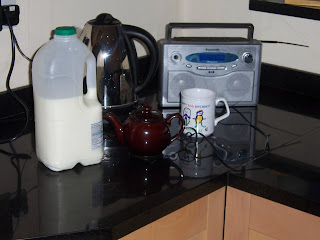 I’m in the kitchen rustling up a couple of poached eggs. I make my first brew in a week. I’ve been cleansing my liver and kidneys with hot water and lemon. It’s a pot of tea for one for The Groundhopper. It is magnifique and tastes like Bollinger. I mark it with an 8 out of 10.

I’m listening to Brian Matthew’s Sound of the Sixties show on Radio 2. He plays the occasional humdinger. Today it’s Jamaican ska singer Desmond Dekker and The Aces, ‘Israelites.’ It’s my favourite part of the day. Everyone is in bed. It’s peaceful and tranquil. Just me and Desmond.

Uh-oh, Mrs P has risen from her slumber and has a list of jobs for The Groundhopper as long as Peter Crouch’s arm. 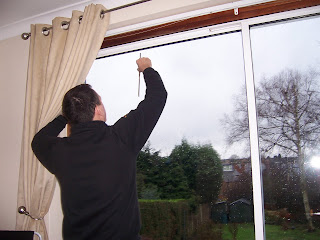 First job is to clean all the inside windows with my proper window cleaners’ blade. Thank God Jonathan Ross cheers me up with Public Image Ltd’s first single from 1978 - ‘Public Image.’ I’m pogoing readers whilst sliding the blade across the window, mopping up any excess water.

I’ve had enough now. I’ve cleaned more windows than George Formby. I check the best message board in the world. Wollaton manager, Ian Lowe, has very kindly posted that the game is 100% on. Referee John Beckett has taken the time out to travel down to the WSA and give the game the green light. Good on you John.

My boys are off down the Tricky Trees – it’s ‘Kids For A Quid.’ Mrs P is on the hunt for a new television – G****e Smith’s appearance last night has caused a crack in the screen. The coast is clear to head down to Wollaton. 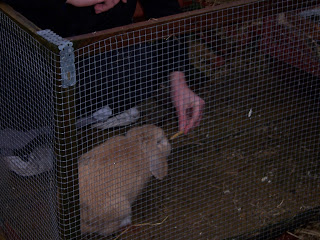 I’m walking out the house past Finley’s cage. I’ve a blue chew (for Wollo) and a yellow chew for Dala) in my hand. Which ever one he takes from my fingers first will be Finley’s prediction of today’s winner. He snaffles up the blue one. Fair play Finley lad, Magdala are 2nd from bottom of the league.

I’m in the Rolls Royce. Alan Green is complaining about how turgid the Stoke v Liverpool game is. Only 10,000 Stokies turned out when Sticky was at the Britannia Stadium a few weeks back. Predictably, it’s a full house today.

I drive down the A52 towards Nottingham. and turn left at Crown Island. I’m soon parked up in the Admiral Rodney car park. It’s a place close to my heart. I took Mrs P out for a drink here on our first date back in August 1988.

My phone goes off. It’s Mick Leonard who is head of youth at Notts County. We haven’t trained or played for nearly a month now; it’s just a catch-up call. I mention that I’m at the WSA, just around the corner from his house, if he fancies taking the game in. The Pies have just been called off at Bradford City. 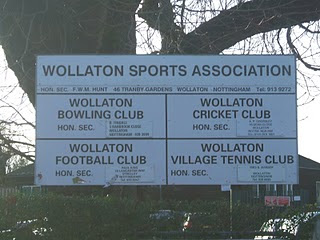 I walk up the entrance to the ground with honorary secretary Frank Hunt. He’s proud of the fact that volunteers have taken three days of their time to clear the pitch of snow.

I poke my head around the door of the cosiest clubhouse in Notts. No-one is about. It’s 15 minutes before kick-off. I meander around the perimeter of the ground. I pass the cricket scoreboard and the well kept gardens of the bordering bungalows. The pitch looks great but is heavily sanded in the bottom left hand corner.

I hear my name shouted out and look up to see Big D and his faithful sidekick Roscoe. It’s our third Saturday in a row together. Roscoe had a traumatic encounter at the Ricoh Arena tea bar last week. He doesn’t appear to be ‘over it.’ 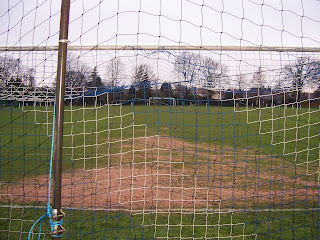 I notice a lonely groundhopper sat outside the wooden cricket pavilion making meticulous notes. I have had bad experiences with ‘proper hoppers.’ I even bumped into one in D H Lawrence’s bedroom.

A good crowd begins to congregate. It’s just about the only NSL game that’s beat the elements today. Nottingham is a city full of characters and one or two have rocked up today. Hobo from Kimberley is dressed up in full Russian headgear. Eccentric Welshman, Dennis Harris (Ilkeston Town chairman) has missed out on a trip to Fleetwood to grace us with his presence. I could go on and on (you already have Sticky).

Wollaton look sharper in the opening stages. They have the pace of Adey Bascombe and the width and craft of Justin Whatmore. They’ve already made a few openings when Bascombe escapes the attentions of the ‘Dala defence to stab home from close range. 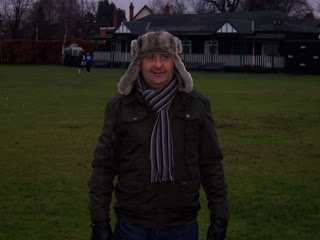 I’ve been joined by Mick (my boss) and former Pies legend Iain McCulloch (1978-83, 215 appearances). He coaches the Notts County u13 youth team. His thick Scottish accent is hard to decipher. It’s akin to watching an episode of Rab C Nesbitt.

Wollaton have the move of the match on 30 minutes. They’ve pinged the ball all over the park, Whatmore delivers a centre, Bascombe heads goal wards and only a fantastic save by the pink-shirted ‘Dala ‘keeper prevents Wollo’s lead from being doubled.

‘Dala have been edging their way into the game. They pass to feet and work the channels well. Wollaton have no-one to match the energy and tenacity of captain Richard Wyman. Flinders, the Wollo ‘keeper, has already been called into action on more than one occasion, when they restore parity on in the 44th minute through Stephen Hillier. Within a minute the visitors are a goal to the good, with a smart finish by Ashley Robinson. 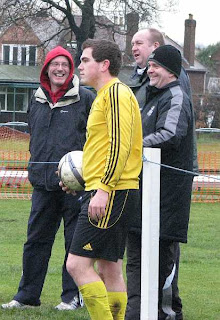 Poor old Nidge, the NSL photographer, has been skiving in the clubhouse, seeking out an early brew. He’s gobsmacked when I tell him that he’s missed two goals.The catering staff are top notch and serve a sublime cuppa. It’s up there with Bardon Hill Sports and is marked with an eight.Stoke score a late equaliser in the Sky game. Rafa should add goalkeeper to his shopping list (fact).

I take a stroll around to the Wollaton dug out to see how they are taking the news of the two late goals. I’ve just positioned myself close to where Ian Lowe is standing when Ashley Robinson pops in a third. 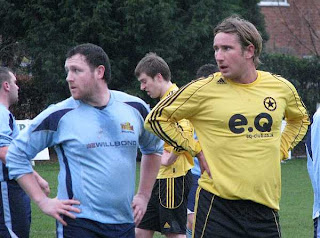 The industrious and tireless Hillier scores the goal of the game on the hour. He outmuscles the Wollaton defender and races away. He tucks the ball into the bottom right hand corner of the goal. The guy has run his socks off.

The Wollaton assistant manager is irritated by an AWOL back four. He showers the team with foul-mouthed verbal volley. Sticky is amused, but hey, at least the guy’s got passion.

The game is played without fear. It’s jumpers for goalposts. There seems to be a goal every five minutes. The defending is comical (non-existent). The crowd are trying to work out the score. We agree on 4-6. 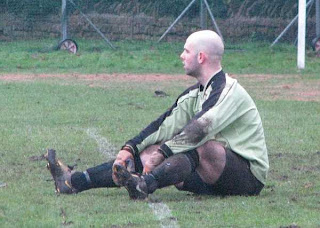 Big D is holed up in the clubhouse; it’s session on for him and ‘Willy’. Roscoe (‘Beadle hands’) is tasked with collecting the drinks – God help them if last week antics are anything to go by.

Sticky has time for a swift pint of Guinness before slipping away. I’m back home for 4pm, just in time to put Finley to bed and to let him know that his predictions are rubbish. “Stick to what you’re good at son - chewing computer and Sky TV cables”.

Man of the Match: Finley Palmer.
Posted by Sticky at 10:40 AM

Eastwood supporter here. Please ensure you that you watch part of the Stocksbridge match from their bar, it provides a great view of the pitch & surrounding area.

Hey Sticky, it sounds like The Skipper's following in his dad's footsteps - as I recall The Groundhopper used to volunteer to fetch the cricket tea ham every week for a year coz Mrs P was behind the bacon slicer at the butchers......