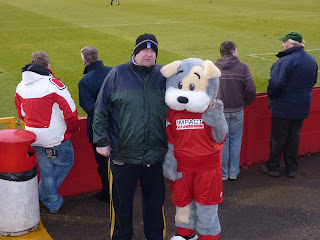 It’s Friday December 31st : famous people born on this day include the Chairman of the Keyworth Branch of the Wolverhampton Wanderers Supporters’ Club – ‘Gangsta.’ (7 years old). The little fella’s favourite colours are orange and gold.

He’s splashed out on a replica Holland shirt for his birthday. I’ve watched him tackle his big brother in our back garden. The antics of the Dutch squad in the World Cup final of 2010 have had a lasting effect on the youngster.

It’s New Year’s Eve night. We’re having a party at our house. Thirty people are in the room. Sticky Palms is in full flow as the bingo caller. I’ve got all the lyrics. We’re playing for an £8 jackpot. Everyone is on tenterhooks. Most of the players only require one number.

I shout out number 14. There’s a huge squeal. A young man celebrates with a shirt over his head. Birthday boy,’ Gangsta’ has scooped the jackpot. 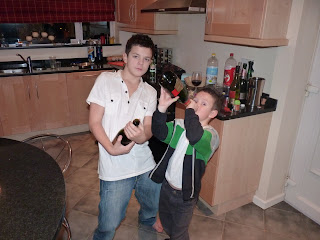 Mrs P has organised a ‘Secret Santa.’ People have bought some joke presents. I’m called into the room to collect my gift. Some cheeky sod has gifted me a plastic, talking budgie. When will I get a real one?

The party is a success. Taggart is man of the match. He’s slipping my lads a couple of cans of beer. The watching constabulary are not amused.

I’m still washing pots up at 2.30am. I’m fagged out readers. I don’t rise until 11am. There’s a mass tidy up. I’m soon up at the bottle bank for the second time in two days. 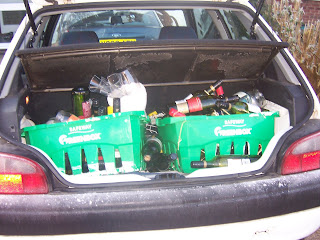 Big D texts in. He’s happy to drive to Alfreton, providing I pilot up to his house in Bramcote. Mrs P is off to the QMC to sit with her mum for an hour or two. I’m desperate to blow the cob webs away.

I take a quick gleg at the unofficial Badgers forum, an eleven page thread of insults and vitriol is being played out between fellow Eastwood supporters: they are divided and not united.

I sit with ‘The Angler’ and watch the first half of West Brom v Man Utd. The Baggies are outstanding, particularly midfield duo, Chris Brunt and Graham Dorrans.

I’m in the Rolls Royce on the Melton Road. My head is still banging. I switch Radio Trent on. The annoying ‘Like a G6’ song, by Los Angeles electro hop band, Far East Movement, is bouncing around the car. I switch it off and open the car window to allow some fresh air in. 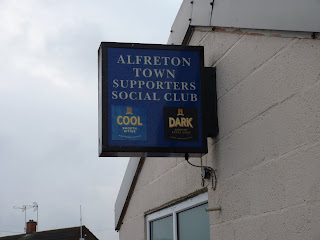 Within 15 minutes I’m knocking on Big D’s front door. The big man has also been ‘on it.’ We hop into his 4x4. He flicks on West Brom v Man Utd on Five Live. The reception is poor. He retunes to Radio Nottingham. Billy Davies is droning on and on.

Big D is livid. He raced back from Radford the other evening to watch a double episode of Coronation Street. It was a no show from the ‘Street’ Jack the Ripper - John Stape. I’m sure he’ll cook up another murder for the New Year.

Alfreton is a town and civil parish in the county of Derbyshire. It has a population of just over 20,000. Its main industry was coal mining. The Thorntons chocolate factory is situated in the south of the town. The civil engineer, Benjamin Outram, was born in the town in 1764. 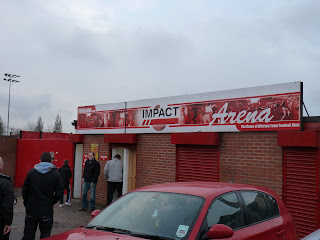 Alfreton Town were formed in 1959. Their record attendance is 5023, for the visit of Matlock Town in 1960. They recently sold talismanic defender Kyle McFadzean to Crawley Town for a substantial fee. Previous managers of the Reds include: European Cup winner, Gary Mills (now York City) and Oxford United manager Chris Wilder.

I bag a programme for a couple of quid on the way in. It’s another outstanding effort for this level.

Big D and Sticky Palms need some hot food to soak up the alcohol fumes from last night. The snack bar ranks amongst one of the best on the circuit. We have Cornish pasty and a chip cob. It’s washed down with two cups of tea.

I notice Rammers wandering through the turnstile. He’s accompanied by Shirebrook Town manager Rudy Funk. He’s immediately pounced upon by eager Eastwood fans, who are no doubt keen to express their gratitude to John for the sterling work he put in when he was an employee of the club. 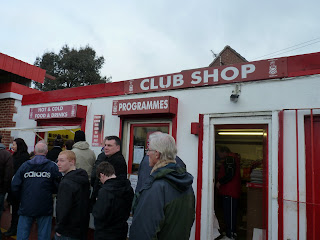 There is a moving moment before the game when a minute’s silence is held in the memory of goalkeeper Dale Roberts, who turned out for both teams during his short career. I notice how visibly upset Reds’ ‘keeper Paddy Gamble appears – he used to be a colleague and friend of Dale Roberts at Nottingham Forest.

We stand behind the goal, at the top of a steep terrace, with a terrific, panoramic view of the Derbyshire landscape. Alfretown are attacking our end.

England C international, Liam Hearn, looks razor sharp for the Reds and more than capable of playing at Conference level. He has a shot turned away in the opening minutes and blazes another effort into the crowd.

The Badgers begin to find some rhythm. Pocket-sized forward Lindon Meikle is on top of his game. He buzzes like a bee, but his final shot has no sting in the tail. His touch is good today, as is his movement. 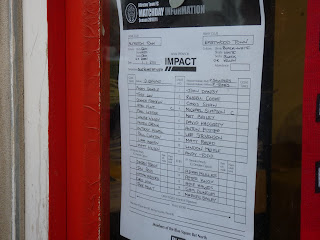 Eastwood take the lead on 42 minutes through a deflected free kick from former Belper Town attacking midfielder, Lee Stevenson. Gamble makes a fine save from Lindon on the stroke of half time.

We take a stroll in an anti-clockwise direction around the Impact Arena. We stand to the rear of an all-seated area, behind the goal we expect Alfreton to launch an all-out attack on in the second period.

Big D has made acquaintance with the Alfreton mascot, Jasper the Dog. The big man is never shy at missing a photo opportunity. Jasper is not as sociable as Scrappy Doo or Scooby Doo, but does whisper his name into my ear.

Nicky Law will have been stripping the paint off the changing room walls. Eastwood have dominated the last 25 minutes of the first half and look good value for their lead. Stevenson’s drive and Meikle’s all round play are easy on the eye. 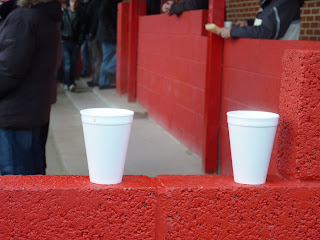 A last ditch tackle on Anton Foster prevents Eastwood from going further ahead. Alfreton restore parity on 51 minutes. Substitute Ian Ross floats in a corner, Paul Clayton’s effort is cleared off the line, but Hearn pounces onto the clearance to equalise.

Andy Todd puts Eastwood 2-1 up, cutting in from the right hand side and blasting a shot into the roof of the net.

The final half an hour is a pleasure to witness. The game ebbs and flows and twos and throws. You just don’t want to it end. The Badgers spurn two great opportunities. Stevenson and Meikle, for once, fluff their lines. 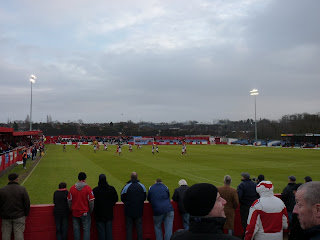 Former Stags’ winger, Nathan Arnold, has been introduced to the game. His low sense of gravity and speed are causing mayhem down the Alfreton right hand side.

Ian Ross clips a ball in from the left which is headed home by Anthony Howell. The Reds go for the jugular in a grandstand finish. At the death Danby tips over an Arnold header which would have given Alfreton an undeserved victory. Eastwood are well worth the point.

It later transpires that Preston North End’s mascot, Deepdale Duck, had to be led away by a club steward for distracting Rams’ ‘keeper Stephen Bywater. Jasper the Dog would never behave like that.

I can confirm that you did look knackered! You at least made me feel better.

Stevo scored two more v Boston, the first one was a gem. He's a class act.

Sticky , as usual another enjoyable read.
Thanks buddy
Onion Bag