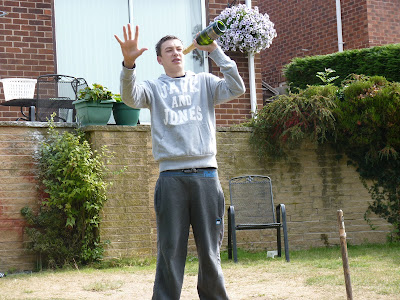 It was around 3pm when I heard the news that she would have to be kept in overnight. They said she was comfortable and were hopeful of performing surgery sometime the following morning. It’s a restless night for Sticky Palms; nights apart have been rare during our long and loving relationship.

I get the call at midday that the operation has been a complete success. The necessary paperwork has been signed, the management have released her, I’m told I can collect her at 5pm.

It’s a tearful reunion. I cling tightly to her body, particularly where the new welding has taken place, not ever wanting to let her go. £137 to get her battered body back on the road for another year: well done ‘Sally Gunnell.’ 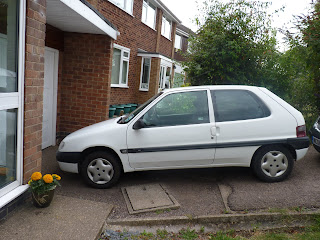 It’s Sunday morning, I’m sat on the patio eating breakfast, watching the boys play cricket in the back garden. Sticky jnr bowls a half volley, ‘The Skipper’ is onto it like a flash, dispatching it through the covers for four. It ricochets off the wheelbarrow, loops up in the air and drops over the fence into our next door neighbour’s garden.

They are not just any old neighbour, it’s ‘George and Mildred’ – who regular readers will know that Sticky Palms has had his run-ins with in the past. ‘The Skipper’ is inconsolable with grief. He has just lost our one and only brand new Incrediball.

I climb onto the step ladders and peer over the fence. I spot the ball nestled at the bottom of a raspberry bush. I ask Finley, our rabbit, if he fancies digging a tunnel from his cage under the fence to retrieve the ball. He says today is Sunday and his day of rest. I reply that he’ll never land the part as an extra in Watership Down. 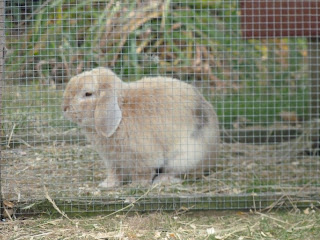 Six hours later Sticky jnr plucks up the courage to knock on ‘George and Mildred’s’ door. He talks like Inspector Blakey off On the Buses; she looks like Olive, Arthur’s wife. The ball has mysteriously disappeared. They claim they have never seen it. The bastards have confiscated it. I call Sticky jnr back home.

I’ve had a couple of Stellas and I’m about to lose my temper with them. I shout over the fence that they must have more balls in their house than JJB Sports. I’m flipping fuming readers.

Half an hour later Mrs P walks into the lounge with an orange ball in her hand, it had been left in the porch by an anonymous person. They have been shamed into returning it back. I click open another Stella in celebration. 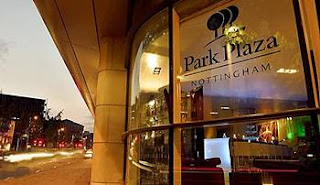 It’s Friday evening. Taggart and I are being driven into Nottingham city centre by a very attractive South African lady. We walk past the 4500 miles from Delhi restaurant on Maid Marian Way, across the road is the Park Plaza hotel. A handful of Indian cricket supporters are milling around the entrance waiting for the Indian team bus to arrive from Trent Bridge.

I have a few beers at the Castle Inn and Fat Cat, but I’m not in the mood and feel dog tired. I’ve been on the phone for 20 minutes sorting out a problem at the Pies. I’m tucked up in bed before midnight.

Sticky jnr needs a hand with his papers; he has the biggest round in Keyworth. According to the headlines the Tax Office is in ‘chaos’ and Cheryl Cole is returning to X-Factor. 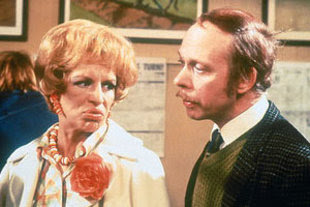 The lads are playing a Test match in the back garden. Finley takes one for the team at extra cover. He’s injured his left front paw, a little bit like ‘Swanny’ did yesterday for England. I ask him for a score prediction, he replies he’s wounded, and can I ask him later.

I drive down to Highfields Hockey Centre on University Boulevard. Notts County Youth are entertaining Cheltenham Town. We could be three up in the first 90 seconds. We give away a soft goal and never really get going.

I drop the boys off at Plumtree for cricket. Mrs P has made me a chicken and cheese baguette for lunch. I watch a bit of cricket as India appear to take control of the 2nd Test at Trent Bridge.

The Nuclear Scientist arrives on cue. We drive down the A46 and onto the M1 southbound, leaving at Junction 18. Jonathan Agnew keeps us entertained on Test Match Special. 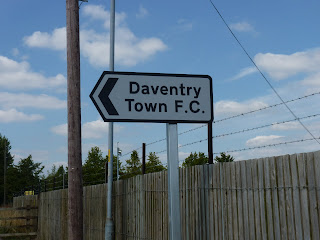 Daventry is a market town in Northamptonshire with a population of over 20,000. Due to its good transport links the town has become a major warehousing and manufacturing centre. Daventry International Railfreight Terminal is a major terminal for freight change between road and rail.

We pass one after another of huge industrial estates. Eddie Stobart and Wetherspoons are just two of the major players. ‘Dog Attacks on the Rise’ is the headline splashed on the front page of the Daventry Express.

I’ve not bothered bringing the Sat Nav as I perversely enjoy the challenge of finding a ground. After crossing more roundabouts than can be found in nearby Milton Keynes we finally stumble across Communications Park. 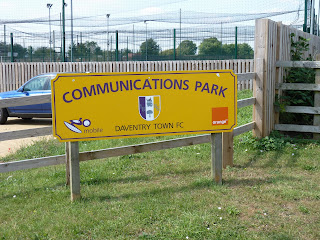 It’s £5 entry but sadly no programme issued for today’s friendly game. We’re both dying of thirst, so snuck into the plush clubhouse. NS has a shandy whilst Sticky Palms raises the bar with a pint of San Miguel. It’s a kind of dummy run for my 10 days in Ibiza.

We get chatting with the friendly bar staff. They recommend viewing the game from the balcony on the second floor.

We climb the stairs and position ourselves smack bang on the half way line. It’s a pleasant enough ground. Trees are behind one goal with some scrubland across the far side. 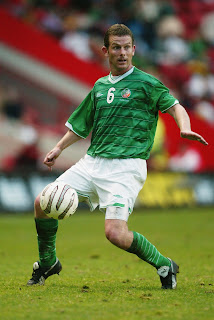 Daventry Town are managed by former Republic of Ireland and Aston Villa midfielder Mark Kinsella. The chairman has made a few wonga from the mobile phone industry. He has certainly splashed out a few bob on this fine-looking clubhouse.

Enfield Town, from the Ryman League Division One North, are today’s visitors. It’s my first view of a London non-league side in ages. Well known footballers born in Enfield include: Michael Duberry, Henri Lansbury and Steve Morison.

Enfield are sporting a ghastly red and gold striped kit. Their helpful secretary, who we’ve been chatting with for the last hour informs me the new kit will have the same colours but with hoops. 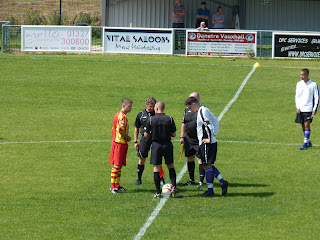 The visitors look the more accomplished team in the opening half an hour. They have pace down both flanks. Both their forwards are always on the move.

News arrives by text from Mrs P that Cotgrave already have seven men back in the hutch. Sticky jnr has bagged 5 wkts, while ‘The Skipper’ has weighed in with the other two. It’s a bitter sweet moment for me as I really ought to be there. What sort of Dad am I?

Twice Enfield spurn chances, blazing over the bar when in good positions. Daventry begin to gain confidence. Former Yeovil and Peterborough United striker Howard Forinton leads their line. He was banned from the game for four months last season, after being found guilty of betting on a game he was playing in (Redditch v Stalybridge Celtic). 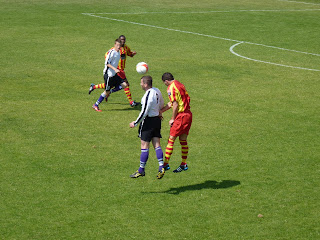 Daventry finish the half with the upper hand. I particularly like the flashes of brilliance from 21 year old Romanian playmaker Claudia Hoban, who I first spotted playing for Blackstones last season.

We’re back in the upstairs bar again. NS opts for shandy again; Sticky Palms plays it safe with a Diet Pepsi.

The sun is beating down and the pitch is already beginning to look a little worn. Daventry play a higher tempo game in the second period. Enfield have thrown on a few second string and trialists. 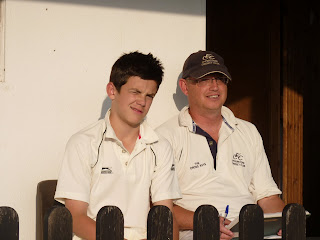 Daventry’s exciting young winger, Casimir Pangne, plays a give and go, he bursts into the box and pokes the ball into the corner of the net. The goal is met with silence from the charming Enfield secretary.

Daventry double their lead later in the half with a header from Scott Cross following a sublime ball in from ‘Claudia.’

Enfield have run out of steam and ideas. Their second string have made little impression. We jump into the car and tune into Radio 4 LW, just in time to hear Stuart Broad take a hat-trick in one of the most eventful tests at Trent Bridge in living memory.

Man of the Match: Sticky jnr (Sorry Broady)
Posted by Sticky at 9:37 AM

How many Stellas Sticky?