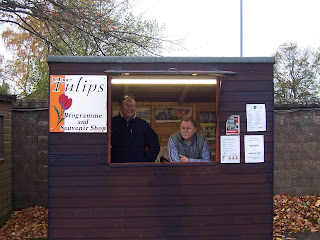 I’ve had a terrific week off work and have spent some quality time with my family. We’ve been golfing at Edwalton, indulged in a Big Mac or two and visited the Snowdome at Tamworth. As White Van Man often says: it’s all’s good.

I’m still buzzing from events at Eastwood Town’s Coronation Park last Tuesday night. What a night of drama that unfolded there. I’m now, for the first time this season, picking out some exciting games.

It’s Friday afternoon and Halloween. We’ve been invited around my brother-in-law’s abode for a party. Life has dealt him a cruel hand; not only is he a copper, but also a born and bred D***y County supporter. He’ll be taunting the kids about the Forest game on Sunday. 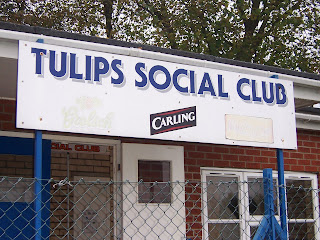 Mrs P is busily face painting the kids ghostly white. Sticky Palms has been ordered to enter into the spirit of things. I race around the village in hot pursuit of a Peter Beardsley or Martin Keown scary mask, but everywhere is out of stock.

Today’s my first peek of the season at Shepshed Dynamo. White Van Man’s mate, Screats, has recently joined them, and is captain. 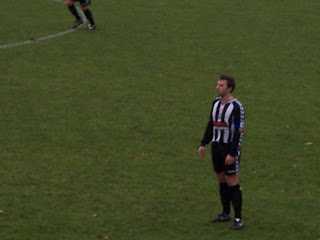 I leave ‘The Skipper’ kicking his heels, awaiting his Notts FA Shield Cup tie. Sticky junior is doing his homework under close supervision from Mrs P.

The road to Spalding is not a particularly driver friendly one. White Van Man is due to pilot, and has been winding me up all week, as he drives like a maniac. He’s been having a dummy run on Grand Theft Auto, on his X Box. He texts me on Saturday morning to inform me he’s warmed his wheels up.

I’m saved by the bell, when I get a call from him at 1pm to say Screats’ dad is driving. It’s a huge relief, and I pack my clean pants back into my drawer. 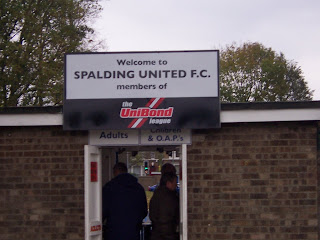 We get in Screats’ dad’s 4x4. He’s got Radio 4 on; I don’t think WVM has ever heard of this station. He’s soon having a mumble and grumble about it. He fumbles with the dialler. I live in hope of Everton v Fulham on Five Live or Radio Nottingham’s Matchday Programme. He settles instead for the ghastly Heart FM. They’re playing that freak Michael Jackson. I visualise ‘The Skipper’ moonwalking to it. It’s followed by James Blunt. I think I’m going to slit my wrists.

We by-pass Grantham, hit the A1 for a short while and onto the A52, We drive through the village of Donington where something dreadful happened two days ago. Thieves ram raided the local Co-op Shop and scarpered off with the cash point machine. Why the Co-op? Bless em. 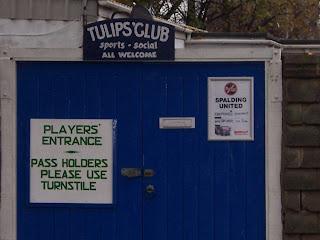 We arrive in Spalding a good 20 minutes before kick-off and park in a local car park at 70 pence for the afternoon.

Spalding is a market town in the South Holland district of Lincolnshire. It lies on the River Welland and has a population of 30,000 people. It’s well known for its flower festival.

Spalding is the sausage capital of the world. They don’t come much better than a Lincolnshire sausage. 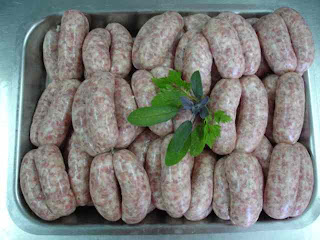 In 2008 Tulip Radio was issued a full time broadcasting licence and will be on the air from 2009. Famous people born in the area include: the shot putter Geoff Capes, down the road in Holbeach, and my Godson’s Cocker Spaniel, Alfie Daft.

The Tulips were formed in 1921 and play in the Unibond Division One South. Their home ground is called the Stewart Halley Playing Field. They are managed by former Cambridge United, Everton and D***y County striker Alan Biley. He has a mullet like Rod Stewart. 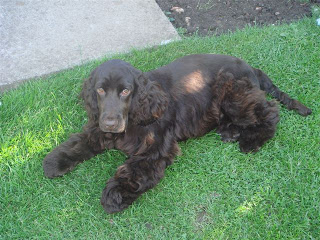 It’s £7 on the gate and £1.30 for a programme that turns out to be a cracking read. The highlight of this offering is a column entitled ‘The Voice of Reason.’ I’m not sure who the contributor is, but what a thought provoking piece he has penned. He takes a pop at some of the supporters and playing staff over recent events and performances.

Despite joining ‘The Tulips’ fans forum I’m not allowed to post a link onto it, or in fact post any message at all. Programme editor and matchday secretary Ray Tucker dominates the board; he’s started the last 30 threads.

Shepshed is a town in north west Leicestershire, just off Junction 23 of the M1 motorway. They’ve had an upturn in fortunes since the arrival of ex Gedling Town manager Lee Wilson. They are 4th in the League. 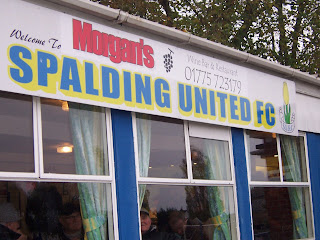 A group of Shepshed fans spot me taking a few photos. They shout out my name and ask me where White Van Man is. Predictably the big fella is queuing up at the snack bar.

It’s a lovely old ground. There are a plethora of portakabins scattered about. It’s tree lined and backs onto terraced housing. The main stand is steep, has a double staircase and offers a panoramic view of the town. The pitch is flat and in good condition, particularly considering that these two teams only met here four days ago,

The PA guy’s taste in music is extreme. First up is Scott McKenzie’s, San Francisco. Next is Jennifer Rush and The Power of Love. WVM calls this a toon: he must have heard it on Heart FM. The guy’s swansong is Tonight I’m Yours by Rod Stewart. Bloody hell I’m dreading half-time. It must be Jimmy Saville spinning the discs. 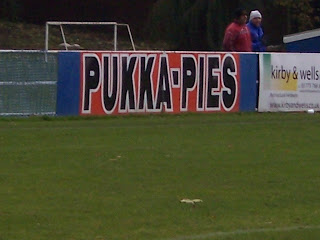 The visitors make a lively start. Their leading scorer, Shane Benjamin has an abundance of tricks and flicks. He opens the scoring on eight minutes, finishing acrobatically, from a flick on, following a long throw in by Screaton.

The Leicestershire team play with confidence and guile and it is only the athleticism of Tulips’ keeper Luke McShane that prevents Benjamin from doubling their lead.

The impressive Screaton and his partner Millns snuff out the direct style of play Spalding United dish up. Robinson and Swinscoe boss the midfield. 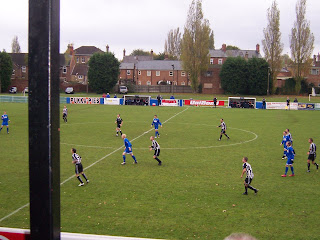 The Tulips’ Nicky Young forces a save from Hateley, and Screaton scrambles the rebound off the line.

Shepshed increase their lead on 39 minutes. Sam Saunders drives down the left wing, his delivery into the box tees up his twin brother Ben to smash the ball home from close range.

Spalding attacker Ricky Miller is out to spoil the party, and is showing acts of petulance, instead of concentrating on the excellent attributes his game possesses. He instead chooses to show the darker side of his nature. The referee loses patience and cautions him. Miller has proper got the face on. He has a goal chalked off for offside. He leaves his calling card on Iain Screaton, with a late challenge. Spalding United skipper Stanhope is asked by the referee to calm the youngster down.

Rod Stewart makes another outing at the break, as I dive into the safety of the cosy bar, with its laminated floor, to watch the latest scores.

Alan Biley looks a forlorn figure, as he meanders across the pitch. He’s lost his boyhood looks. These days he’s more Worzel Gummidge than Rod Stewart. He even talks like the TV scarecrow.

Shepshed are less fluent with the wind at their backs. Benjamin misses out on putting the game to bed; his shot flying past the far post.

The game is close to its conclusion. Shepshed’s recent signing from Carlton Town, 21 year old Martin Ball, is thrown on for the last 25 minutes. He’s clean through on goal but dilly dallies on the way. The ball is hoisted forward and seized upon by the sulking Miller. He shows a burst of speed and enters the area, but falls to the ground as if shot by a sniper. The referee gives a very dubious penalty. 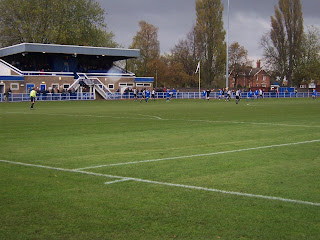 The visiting bench, who have chillaxed for most of the game, go ballistic. Manager Lee Wilson has way too much to say on the matter. The linesman is waving his flag faster than the Italian Army. A raging Wilson is sent to the stands. Luke Kennedy tucks away the resulting penalty.

Shepshed survive some late pressure. White Van Man and I watch the final moments of the game from behind the goal, alongside Wilson. I was going to ask him whether he will be watching X Factor or Strictly Come Dancing on his return home tonight, but the moment doesn’t seem right. He’s still blowing a gasket.

Man of the Match: Ian Robinson
Posted by Sticky at 4:14 PM

Cant wait to see you friday night Palms!, it is for ALL ex-employees isnt it??

I sure hope so Andy ive bought a new frock and everything.

I will be out Sticky, can't wait to meet up with the despatch lads. That grumpy Glaswegian was a card, will he be there?

if anyone one needs a new shirt for friday weve got a credit crunch sale on at the moment!

Do you dislike Michael Jackson?

We have an even better sale on.
Some very sharp threads including
polo shirts with very loud horizontal stripes.

Do they provide adapted golf clubs at Edwalton ?

Simon Bowyer that comment on the grumpy Glaswegian was spot on. Indeed he was a bit of a card I have known him to break wind into a bag of doughnuts then offer them round to his colleagues !

Ex-employee, I believe the scotsman in question once went on holiday with one of his elderly colleagues and led him astray. He Sounds like a "right rum un" to me.