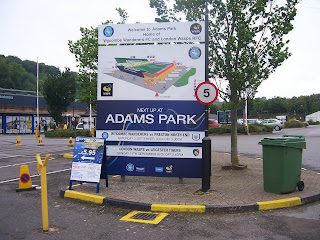 I’m walking at the rear of the Brian Clough Stand. JK is away for the weekend and has very kindly lent me his season ticket. Hordes of Leicester City fans mob the car park. There are obscene chants from a minority about Brian Clough that make my stomach turn.

The game is awful, absolutely dreadful. There’s no pattern, no quality. McGugan sulks like a small child out on the left wing. His shoulders are drooped and his hands are on his hips. Forest gift the Foxes two goals.

My phone has packed up; I can’t even text my frustration to anybody. God, I wish I’d gone to a non league game somewhere. 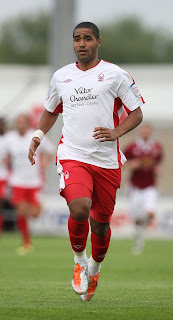 Manchester born Ishmael Miller provides some muscle, passion and desire in the second period. Leicester City’s time-wasting tactics are embarrassing. They roll around as if been shot by a sniper. They boot the ball away at every opportunity.

A chink of light appears from the bench, like he did at Liberty Way in Swansea back in May. Raddy Majewski breathes fresh life into a fatigued Nottingham Forest. He has the balance and movement of a ballerina. He wriggles in and out of tight areas. He’s light on his feet and torments the over-rated Leicester left back Paul Konchesky.

Forest win a penalty, following a brilliantly-given advantage by the referee, with a ridiculous and unnecessary hand-ball. The biggest clown on the pitch, Kasper Schmeichel, grabs the ball from the spot, in an attempt to unsettle a smirking McGugan, the penalty-taker. He’s cautioned for ungentlemanly conduct. 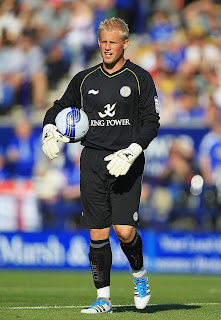 The penalty is coolly tucked away into the bottom left hand corner. Schemeichel crazily hurls the ball into the crowd in a fit of pique, and is shown his second yellow card. He’s berated by his own team-mates. Moments later George Boateng throws his tiring, aching body at a Chris Cohen cross, to bundle the ball into the net. There’s utter pandemonium.

A Leicester City fan sidles up alongside me. He has a face like thunder. “Cheer up mate”, I cheekily grin at him. “F**k off” he replies. For good measure Sticky jnr kisses the two stars on his Forest shirt. It’s the perfect end to the day. 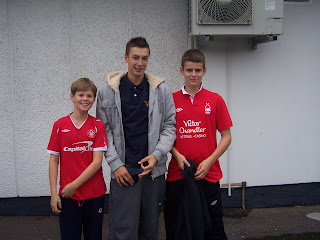 It’s Tuesday afternoon. We’re cruising down the M1 in JK’s 2 litre Audi automatic. Jeremy Vine is playing Gloria Gaynor’s 1975 hit ‘Never Can Say Goodbye’ on his lunchtime phone-in. Cricketing guru, Josh (JK’s lad) is mumbling to himself on the back seat.

He recently left the thrilling 3rd Test match at Trent Bridge at lunch on Day 5 against India, missing a two session 10 wicket collapse by the tourists, just so he could watch a repeat of ‘Celebrity Come Dine With Me’, for the record Christopher Biggins won it.

His brother Lewis is an even bigger muppet. Whilst local hero Stuart Broad was taking centre stage with a hat-trick in the same game, Lewis opted for a ‘spot of tea’ at McDonalds on the Radcliffe Road.

We have a few quiz questions in the car like: Which former Nottingham Forest player has also managed Wycombe? 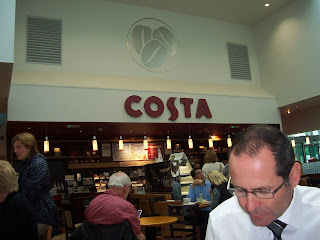 We stop off at Moto services on the M40. JK has a latte accompanied by a blueberry muffin. It’s like having a business meeting with Alan Partridge.

Sticky jnr has his mobile glued to his ear. He brokers a deal on Gumtree to sell a moped to some chav in Lincoln.

JK has to pop in to see a customer 15 miles outside Wycombe. The boys play football in a farmer’s field whilst I listen to the amusing Hawksbee and Jacobs. 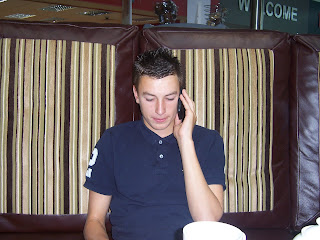 The route to Adams Park is well signposted. We’re greeted by a friendly steward. JK is still suited and booted and is mistaken by the guy as a member of the Nottingham Forest Board of Directors. We ask the fluorescent-coated official to recommend a food establishment. He says ‘Linda’s Burger Van’ is Egon Ronay rated. Where’s Heston Blumenthal when you need him? Probably in Udinese.

High Wycombe is a town in Buckinghamshire with a population of 90,000. It was once famous for making furniture; hence Wycombe’s nickname is the Chairboys. 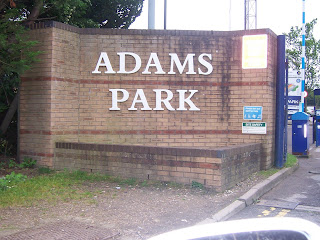 Celebrity chef and the owner of 3 Michelin star restaurant The Fat Duck in Berkshire, Heston Blumenthal, was born in the town. Somewhat bizarrely he supports ‘The Arsenal’ – Lee Dixon is a business partner. 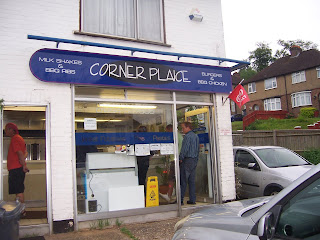 We’re a half an hour walk from the town centre. The pubs near the ground are either dingy, up for lease or unsuitable for kids. We chance upon a chippy. I have the worst beef and onion Pukka pie in living memory. The guy just warms it through in a microwave.

We’re back up the ground again as the vibe begins to kick-in. The players have arrived by coach. New cult hero Ishmael Miller kindly poses for a photo with an excited Sticky junior.

I bag a programme for a bargain £2. Later, on inspection, it proves to be thin on content. The ground is in a gorgeous setting. To the rear of the home terracing is woodland, with panoramic views of the Buckinghamshire green belt area. 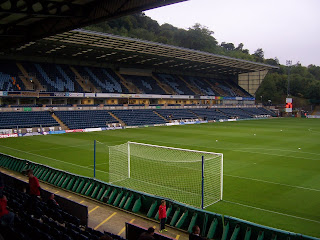 The away end is filling up nicely. The top deck of the two-tier stand to our left has been closed for the evening. The DJ plays one or two trendy indie tunes and throws in the Stereo MC’s ‘Step it Up’ for good measure.

I notice on the ‘big screen’, when the teams are read out, that Sky football commentator Alan Parry, a huge Chairboys fan, sponsors the playing kit of full back Marvin McCoy.

Tonight marks referee Danny McDermid’s final fixture for a while. He is a Major in the British Army and is being deployed to serve in Afghanistan for six months in the morning. 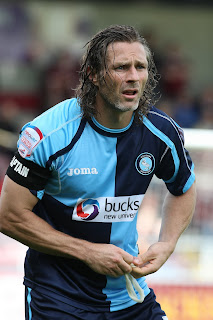 I’m disappointed that my all-time hero Gareth ‘Wild Thing’ Ainsworth is not in the squad tonight. I used to worship this man when he donned the red and white stripes of Lincoln City. Bought for £20,000 and sold for over half a million – we can’t half pick em.

Another good un Lincoln bought from Wycombe was midfield play-maker Graham Bressington. He used to whistle as he waltzed his way through opposing defences.

Forest soon find there rhythm. Majewski makes an immediate impact, threading a ball through to Miller, who opens his account for the Reds. After 6 minutes McGugan makes it 2-0 from the spot after Wycombe ‘keeper Nikki Bull taps Miller’s ankles. 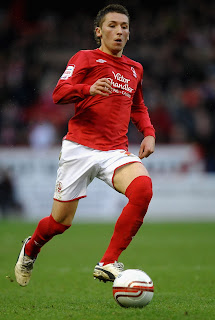 The Chairboys are in shock at their horror-show start and so are the local partridges who have descended on Adams Park from the nearby woodland. Three or four of them have positioned themselves up front, as manager Gary Waddock changes to an attacking 4-4-6 formation. The remaining two or three stray birds nose-dive into the away support like a Japanese kamikaze pilot. The Forest fans are lapping it all up.

Bull keeps Wycombe in the game with a string of fine saves from Miller, McGugan and Majewski. Wycombe also play a fast passing game. Former Jamaican U20 international Joel Grant, a recent signing from Crewe Alexandra is particularly impressive.

The teams come out for the second half to Dario G’s 1998 hit ‘Carnival de Paris.’ The game is once again open. Wycombe press Forest as the visitors choose to counter-attack. Benyon hits the base of the post for the Chairboys.

Majewski gets on the ball, plays a one two with a partridge and sets up USA international Robbie Findley, who finds the corner of the net with a shot off the outside of his boot. 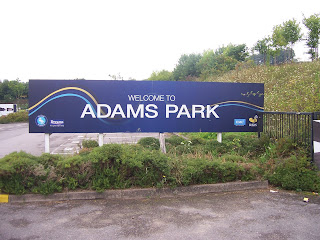 Wycombe are immediately awarded a penalty as I Tweet the 3-0 scoreline on my new HTC phone to my followers. Camp is sent the wrong way by Elliot Benyon. I edit my Tweet.

I immediately get a text to tell me ‘Katy Perry has put Lincoln two up at AFC Telford. Wycombe substitute Kadeem Harris looks a handful and is one for the notebook. He made his debut at just 16 years old and is attracting plenty of interest.

McClaren throws on Tudgay, Garner and Kieron Freeman for the final 20 minutes. A resurgent Joe Garner unselfishly rolls the ball across the face of goal, allowing Majewski the opportunity for a deserved tap-in to cap a fine performance.

Put your house on him starting against the Iron on Sunday.

Man of the Match: Raddy Majewski.