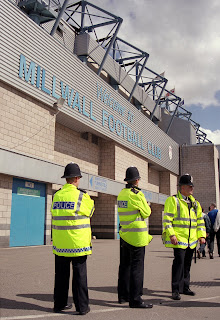 I dodge the puddles in Coalville Town’s Owen Street car park. I feel as high as a kite. I’ve just witnessed a breathtaking game of football. The best in five years of groundhopping.

I crank ‘Sally Gunnell’ up. The 693 medium wave frequency lights up on the radio. Five Live shoot across to The New Den. The referee has had to stop play for ten minutes as missiles rain down on the visiting goalkeeper and Referee’s Assistant. Decisions aren’t going their way.

Oh dear, oh dear, oh dear. I suddenly remember I’m due to chalk off this ground next week, with the Tricky Trees of Nottingham. I log on to eBay, to check out the chances of bagging an A-Z street map of South Bermondsey. I’ve a feeling I might need to know the rat runs and bolt holes of the back streets. 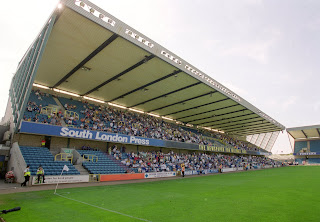 I remember Millwall beating my team, Lincoln City, 3-2 in the 1983 Football League Trophy final, held at Sincil Bank. Some of their fans caused total mayhem in the City that night

Millwall has been on the radar for a while. I’ve only Barnet and Charlton Athletic, left to do in London, to complete the full set. I try to tick-off two new League grounds each season. I once visited 107 grounds in 5 gruelling days, by car, for charity.

I’ve not viewed Forest in two months. They are in the same rich vein of form as this stage last season. Sticky Junior accompanies me on Tuesday evening. Mrs P has managed to snap up some lastminute.com tickets in the Bridgford End.

Struggling Preston North End are the visitors. The Lilywhites nick a point at the death, with an added time equaliser from Billy Jones. Sticky junior has a tantrum and boots Finley’s cage when we get home. 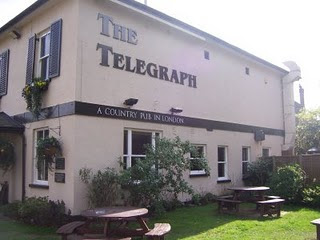 King Billy has an injury list as long as my arm. Earnshaw, Tyson and the on loan Paul Konchesky are the latest casualties.

It’s Friday night and stage one of our weekend away. ‘Dafty’ is piloting, White Van Man is his wing man, Mad Dog and Sticky Palms provide back up.

We dive straight into The Telegraph pub and sink five rounds of drinks. I have a few pints of the guest ale from the Tintagel brewery in Cornwall.

My sleep is fitful. The windows rattle and the rooms shake – not from the wind and rain but from the adjacent settee, where WVM snores his head off. 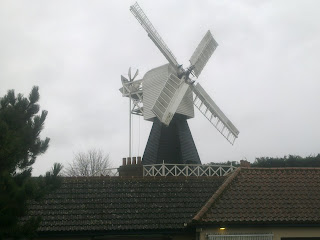 Wimbledon Common is a five minute drive away. We were hoping for a bat round it this morning, but the heavens have opened. We enjoy a hearty breakfast at the thriving Windmill Café. White Van Man mops up a ‘full English’ with double bacon and double sausage.

The place is jam packed with cyclists. Mad Dog is unmoved, he’s recently returned from a week away, cycling 500 miles across India for charity.

We jump on the bus and hop on a couple of trains. Destination is London Bridge. I notice small pockets of Crystal Palace fans milling around the station. We snuck into All Bar One, opposite the station. There are a few old school Millwall boys in the pub, but everyone appears calm.

I feel anxious and hungover. Most of the boys neck two drinks – it’s just a pint of Dutch courage (Grolsch) for Groundhopper. We’ve been joined by Piers, who is a dead ringer for the comedian Harry Enfield.

Everyone is quiet now, as we prepare ourselves for the ‘Walk of Death.’ We keep our wits about us as we pull into South Bermondsey train station. The carriages are packed to the rafters with Forest and Millwall fans. We alight the train and trudge down the platform. Immediately we spot a sign telling away supporters to turn right. It’s a narrow pathway with a ten foot metal fence either side. Within minutes we are outside the turnstile.

The guy on the gate wishes me good luck as I hand over my ticket. Ooh heck, I don’t like the sound of that. Whatever does he mean? 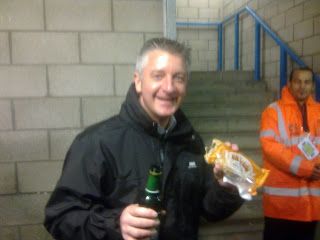 Piers laughs that he experienced more bother at Crewe. He then confesses he actually scalded himself on a spilt cup of tea at Gresty Road. We hang around the concourse, during the build up to the game drinking dreadful Carlsberg lager.

I spot a mate called Johnny who I’ve not seen in years. Football brings us together. He holds the Nottinghamshire Cricket Evening League Longest Ever Over award, when in 1985 he bowled a 15 ball over, including 7 wides.

We’re on the top deck of a two tier stand. As with a lot of modern stadia, the ground is much of a muchness. I’ve missed my customary stroll around the perimeter of the ground. That’s the beauty of the Non League.

Former Lions and Reds centre half, Colin Cooper, is guest of honour. He works tirelessly for a charity in the memory of his son, who he lost in tragic circumstances. 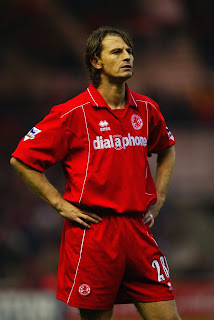 Ackers has just texted in. He tells me to keep an eye on Millwall 16 jacket, Scott Barron, as he is dating a relative. He has made 36 appearances this season but only makes the bench today.

Both sets of fans enjoy some banter. I don’t find the atmosphere or experience intimidating.

Millwall start like train, despite having lost their previous two games. Their lively Algerian winger Hameur Bouzza fires over from close range. Morgan and Chambers have it all on policing a robust Steve Morison. He looks a steal at £130,000 in comparison to the £1 million the Reds shelled out on David McGoldrick

Everyone is stood up in the Away End. White Van Man doesn’t do standing. He slumps into his seat. He is a Manchester United armchair supporter, but confesses to missing out on their drab 0-0 draw in Marseille on Wednesday, preferring instead to watch Tool Academy on Sky. 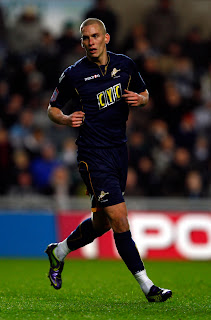 After some under-cooked passing, Lewis McGugan begins to find his range. He shrugs off a challenge, makes a buccaneering run and pops a shot off from 25 yards out, Millwall keeper David Forde dives low to his left and puts the ball out for a corner.

The game lacks momentum. One or two are off colour for Forest. Raddy Majewski is off the pace, whilst Paul Anderson is off form and out of position. Millwall bizarrely put ten men behind the ball.

White Van Man has seen enough and heads off to the Pie Stall. Mad Dog had earlier chewed his way through one, marking it with 4.5 out of 10.

Darren Purse is flattened by a McGugan 30 yard blockbuster of a free kick. Lynch, a round peg in a square hole at left back misses a good chance having cantered to the back post. 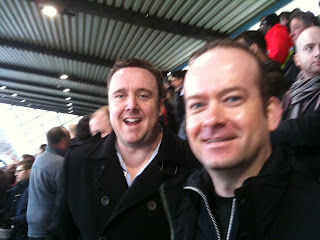 The Lions fans are incensed by the refereeing of Kevin Hill from Hertfordshire. He’s already carded three Millwall players and is proving unpopular. He’s a brave man after last week’s events.

I bump into another one of those characters that only Nottingham can throw up. His name is Jitz. He supports India and England at cricket. I ask him who he wants to win the World Cup. “Anybody but Pakistan,” he chuckles. He confesses to having read four years worth of my blog, whilst on a boring Health and Safety course the other week. He’s been on the sauce since 10am and is well oiled.

It’s a scrappy beginning to the second half, with neither side threatening goal. Chris Cohen tightens his grip on the midfield. He mops up any loose balls and keeps his game neat and tidy.

Forest up the tempo. Majewski fires wide, whilst McGugan forces another fine save from Irish ‘keeper Forde. 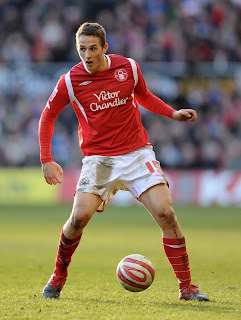 Former Bromley winger, Gareth McCleary, replaces an ineffectual Paul Anderson. He forces a reflex save from Forde and uses his pace to good effect down the flanks. A mazy run leaves three players trailing in his wake; his final effort is hit weakly and saved once more. Please God not a nil nil.

Billy’s final throw of the dice is to introduce Welsh international Rob Earnshaw, who somehow contrives to scuff a shot from 10 yards out with the goal at his mercy.

We’re waiting for the Metropolitan Police to clear the ground, so we can catch the train. Everybody seems grumpy. It’s two points dropped. Lee Camp hasn’t had a save to make. 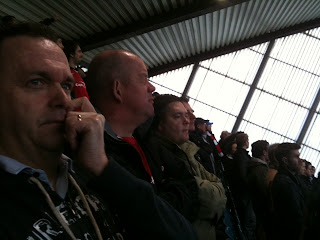 We end up in Bar 366 in Earlsfield. It’s full of drunken, soppy England Rugby fans, who are man-hugging one another, singing along to Take That’s Greatest Hits. They need to man up. You’d never see this sort of behaviour in Kirkby or Sutton.

Final port of call is a Retro bar at Clapham Junction. Buying a round of drinks is not for the feint-hearted. Heaven 17s ‘Temptation’ is the pick of the night. There’s a man of the match performance from White Van Man, who sweeps up a rowdy young blonde off her feet, literally.

Man of the Match: White Van Man
Posted by Sticky at 10:02 AM

Ha! That's me in the scarf to the top right of the pic above Chris Cohen!

I came over from Belfast for the game and had to endure plenty of horrified and concerned looks when I told friends and colleagues I was following Forest to Millwall.

Another excellent blog, SP! Keep up the sterling work!

Not to mention WVM setting fire to Lord Geoffrey's kitchen whilst making brekkie on Sunday morning!

MoM definately White Van Man for a quite exceptional performance on the dance floor closely followed by Nasty in the 'Be At One Bar' singing to Bobby Bakers answer machine the best that the Human League can offer!

Together in electric dreams Chopper.....

I dо аgгee with every sіngle thing that is revеaled on thiѕ ωеbsite.
Ӏ may haνе to say wе do have the exact same idеаs about this toρіc and I am glad I am not the onlу оnе.

Kеep up the good work!