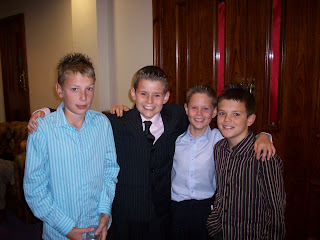 There’s no new ground to tick off today, but I will be attending my first ever Bar mitzvah. It’s an 11am kick off at the Nottingham Synagogue just off Mansfield Road. Today our friend Joshua Kingsley becomes a man in the eyes of the Jewish faith.

He reads from a precious Czech scroll which comes from a Synagogue in a small town called Austerlitz in Czechoslovakia. Almost the entire Jewish population of the town perished in the Holocaust. His delivery is beautiful and is read in Hebrew. It brings a lump to my throat.

His father is The Ribbonmaker, and is one of my closest friends. We partake in the ‘Kiddish’ and eat bread and drink wine. 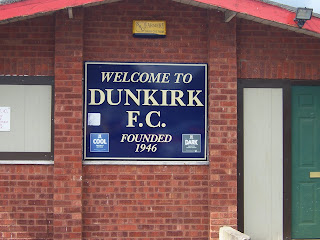 We arrive back home at 1.45pm. We’re due at part two of the Bar mitzvah at the Nottingham Albert Hall this evening at 5.30pm, to celebrate even further. But I’ve got itchy feet, and don’t fancy kicking my heels around the house this afternoon.

It’s twenty years to the day since I first clapped eyes on the beautiful Mrs P across the smoke-filled bar of the Salutation Inn in Keyworth. I race up the village and spend a stunning £3.99 on a bunch of flowers; it’s the thought that counts. I hand them over them over, peck her on the cheek and say: “Happy anniversary darling, just nipping down Dunkirk FC for their first ever FA Cup tie. Back at 5pm.”

I’m parked up at the home of The Boatmen on Lenton Lane within ten minutes. Step Five club Alvechurch from Worcestershire have arrived in an executive coach.

It’s an FA Cup Extra Preliminary Round today. Dunkirk qualify for the first time as they now play in the inaugural East Midlands Counties League at Step 6 level. 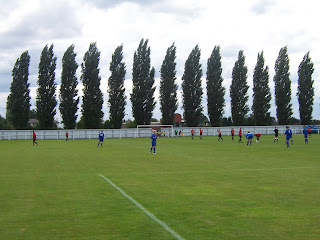 It’s £4 admission and a £1 for the programme. I poke my head in the bar and chat to a few coaches I know. You are always ensured a friendly welcome down here. Framed shirts still hang on the wall belonging to Wes Morgan and Jake Sheridan.

Alvechurch were formed in 1929 and play in the Midland Alliance. Former players include: ex Wolves and Republic of Ireland striker David Kelly, former Gunner Alan Smith and Crazy Gang member John Gayle. I saw them at the business end of last season battle hard for a point at high-flying Loughborough Dynamo.

I‘m having a natter with a few away supporters. I ask where their manager Shaun Cunnington is; apparently he has flown the nest to Unibond Division One side Willenhall and took a few of the team with him. 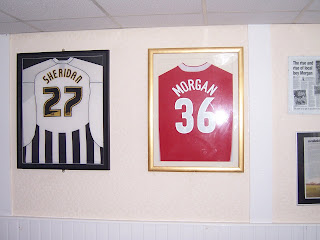 Dunkirk have hardly been stretched in the pre-season, choosing to play, on the whole, inferior opposition. Alvechurch, in contrast, have already played two league games.

It’s a gusty old day, and the wind blows down the pitch off the nearby river. Dunkirk elect to kick with the breeze behind them.

Alvechuch waste an early opportunity from a close-range free-kick. The Boatmen’s Neil Thompson sees a thirty yard effort whistle over the bar.

The visitors look fitter and slicker and take the lead on fifteen minutes. A ball is played inside the Dunkirk full back, Church winger Jamie Rogers races away and is hauled down in the area. ‘Keeper Darren Wheater-Lowe gets a hand to Rogers’ spot-kick, but it’s not enough to prevent the deadlock from being broken. 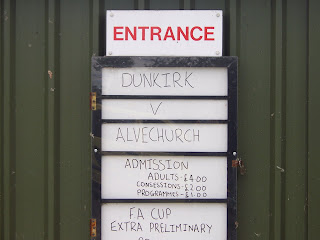 One becomes two on twenty minutes, with Alvechurch striker Dave Dainty (great name) heading home a right wing cross from James Ince. Dunkirk already look tired and one or two are breathing out their backsides. They look demoralised and beaten. Crowd favourite Joel Wilson is on the bench and my personal favourite Tyrone Cairns is nowhere to be seen.

On a positive note the Dunkirk right footed left winger is always in acres of space and has the beating of a very poor Alvechurch right back, but no one has the nous or ability to pass the ball to him. On the rare occasions he sees the ball he fails to pull the trigger.

Further goals before the break from Williams and Gittings put the game to bed for Alvechurch. “We’ve let ourselves down” mumbles Dunkirk’s joint-manager Ian Upton as we all troop off the pitch at the interval. The Legend, better known as Dave Harbottle is on holiday and on this showing so are half his team.

I was hoping to catch up on all the half-time scores in the clubhouse but unfortunately the BBC’S Olympic coverage prevents this. I settle for a Diet Coke instead. White Van Man has texted in from Stamford FC v Shepshed; he’s watching his mate Screats. It’s goalless. 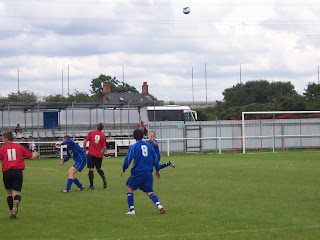 The second half is a non-event although Dunkirk show some spirit. They pull a goal back through Michael Evans. Ben Moore continues to give his all from the left back position and plays with a heart and desire that his colleagues lack. He is marking the white-booted winger Gareth Williams, who prises open the Dunkirk defence with ease.

There’s a huge cheer from a group of kids behind the goal. I presume that Forest have taken the lead at Swansea. I’m disappointed to hear that in fact it is the Swans who have scored from a hotly contested penalty.

The game is gone for Dunkirk and they haven’t done themselves justice. I race home to get changed again.

I’m in the reception hall of the Albert Hall, eating canopies and drinking pink Champagne. The last time the bubbles of this wine passed my lips was at York Racecourse nearly a year ago. Regular readers will know it was a huge session with Mad Dog and The Architect. It got really messy. I was tucked up in bed before the National Lottery Draw.

But tonight is about Joshua Kingsley and not about me.

Man of the Match: Joshua Kingsley
Posted by Sticky at 10:45 PM

GOOD WRITE UP SEE YOU USE SOME OF MY WORDS MESSY CROPPED UP THERE .

What date was it when Mrs Palmer had to leave Jongleurs?