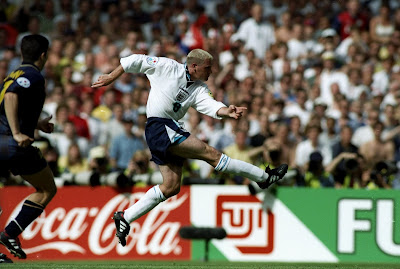 Mrs P is back from her girlie weekend in London. While she was swanning round The Ritz, The Wardolf and Langhams, Sticky Palms was watching the pizza boxes, Stella cans and sweet wrappers pile up. A frantic injury-time tidy up by the three of us ensured the house looked respectable on her return.

It’s Friday night and Mrs P is out on the razzle dazzle once again. Nottingham’s Ha Ha Bar is the scene of her latest born-again drinking exploits. This extraordinary role reversal continues with The Groundhopper having to drag the kids up to school for ‘The Skipper’s ‘Dickensian Evening.’ I chat away to another disillusioned former junior football team coach as ‘The Skipper’ performs his puppet show; we’re both relieved to have escaped the game and the show. 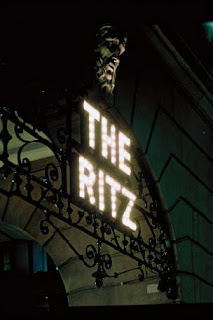 ‘The Skipper’ has had the hump for most of the week and I have to think of a punishment to fit the crime. The Nuclear Scientist phones to say he’s off down to watch ‘The Pies’ at Meadow Lane. Would ‘The Skipper’ like to come? It’s like receiving a life sentence. ‘The Skipper’ takes the news badly, but hey, at least he’ll enjoy the half-time chips.

Sticky junior has gone for a kick about up the astroturf and Mrs P is baking some Viennese Whirls.

White Van Man has offered to pilot today; he didn’t think we’d make it in daylight had I been sitting in the chair. He’s the maddest driver in the world. He’s been up all night watching his Top Gear DVDs. The Taxman won’t go in the same car as him since an episode at Hednesford a year or so ago. But I am made of sterner stuff. I pack a spare pair of Calvin Klein’s and a pack of Imodium. 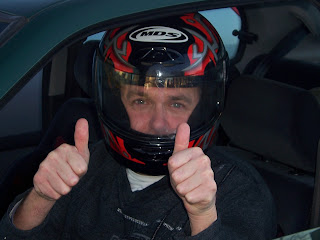 He arrives right on cue and is in cheerful mood. Morrisons have been blessed with his presence this morning for his monthly shop. All staff holiday leave was cancelled and emergency shelf stackers were on standby, particularly in the pie section, as he salad swerved his way around the aisles.

We go through Kegworth, onto M1 and down the M42. He briefly puts on Five Live to hear that Fulham have equalised against Man City. It makes him chuckle as he’s a closet Man United fan. 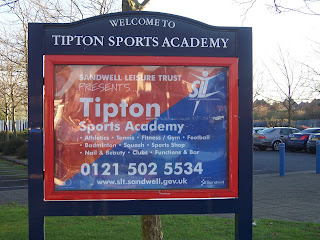 I ask him about his time in charge of the Salutation Pub FC a few years ago. They strolled their way through the Nottinghamshire Sunday football scene. He had more players signed on than Barry Fry did at Birmingham City. The Nottinghamshire FA wrote to him to enquire whether he was aware that he had 63 players registered. He replied back saying that just like Claudio Ranieri’s Chelsea; he had a squad rotation policy. I can imagine him having a Mike Bassett moment and hurling Flaming Sambukas down his throat after another good win.

We hit Tipton in just under an hour. Thankfully West Bromwich Albion aren’t at home today. I’d completely forgot that Tipton Harriers Athletic Club is at the same venue. I’m gutted when I realise we will have to view the game over eight lanes of an athletics track. I wish I’d brought my binoculars now. 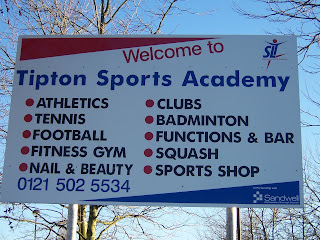 We park in the sports centre and stroll up to reception to ask where the ground is. Tipton has a bit of a reputation but it looks like the ground is situated in a fairly middle-class area of town.

It’s £5 entry for this FA Vase 3rd Round clash. The programme is £1 and good value. I pay the big fellow in. There’s the main stand to our right as we head straight for the tea bar. There’s no sign of the huge away following that is expected. On making enquiries we’re told they’re all in the Tipton Sports & Social Club. 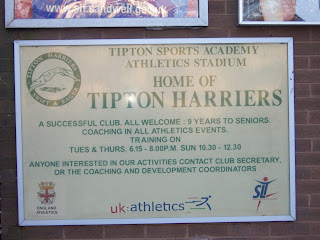 The two ladies serving tea are extremely friendly and give us the low down on the club. WVM is not particularly impressed with the size of his tea cup and marks it with a six. Sticky has an orange cordial, as he has a raging thirst still from his red hot pizza last night.

There’s an impressive steep grass bank on the opposite side of the ground. We amble over to it but can’t see the far goal as the dug outs obstruct the view. It’s the first time WVM has seen an athletics track, apart from on his TV set. 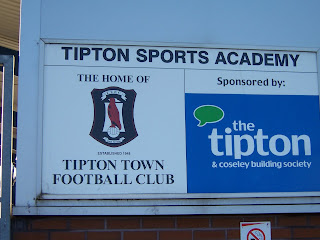 Tipton is in the Sandwell Borough of the West Midlands. It has a population of 47,000. The British National Party are popular in the area due to its high ethnic population. It is alleged that a disgruntled ex-employee, from our area, has published a list of all their members on the internet. Good one that. One or two ‘pillars of society’ are scurrying for cover.

Tipton Town were formed in 1948 and share their ground with the Athletics Club. The nineteen acre site is a multi purpose sports complex. 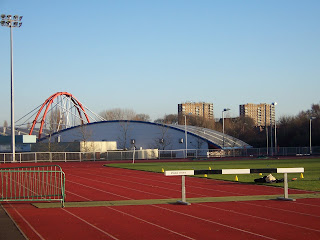 Today’s visitors Dunston Federation are from north east England in what is now called the Metropolitan Borough of Gateshead. It’s close to the Metro Centre. Oh my brain is ticking now.

AC/DC lead singer Brian Johnson is from the area, but it is more famously known as the birthplace of flawed genius, now a tragic act, Paul Gascoigne. It’s best for us to remember all the joy he gave to us on the football field.

Dunston are amongst the fancied runners to reach the Vase final. The winners of today’s tie will receive £1300. They have only lost two League games out of sixteen. 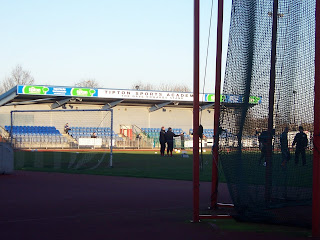 The excitable ‘Fed’ fans begin to filter into the ground, following a few pints in the bar, swelling the small crowd. I stand close to the tunnel, cupping my ears to catch the guy shouting out the line-ups. In three years of groundhopping I have never seen a side receive such a rousing reception as they enter the field of play. It’s worth a goal start.

The first twenty minutes is scrappy affair. Neither side can string two passes together. Both goalkeepers shank, slice and scuff the ball. They both look shaky, but neither are tested.

On 40 minutes ‘The Fed’ are awarded a free-kick 22 yards out. Wells lifts the ball over the wall and Tipton ‘keeper Cox can only help the ball into the net. The game has been desperate for a goal. I breathe a huge sigh of relief. WVM doesn’t do nil nils. He’s spent most of the first half texting his mates in a desperate search for a ticket to the Carl Froch fight tonight. 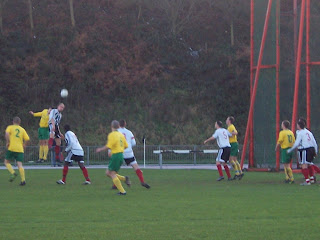 ‘The Fed’ don’t waste any time in doubling their lead, with Andrew Bulford smashing the ball home from ten yards. He races across the pitch towards the visiting support and hugs his father. It’s a magic moment. The over-zealous referee has done his best to spoil a stop start first half. He’s clearly not a compassionate man, or a family man, coming to think of it, and waves a yellow card in Bulford’s face on his return to the pitch.

We seek warmth with the Geordies in the social club at the break. Both WVM and I are party animals and are desperate to prove to the Geordie boys that we can sup with the best of em: “Can I have an orange and mango J2o and a blackcurrant and soda please love.”

We swap ends as we expect a rout from ’The Fed.’ They miss a few chances to wrap the game up and have a goal chalked off for offside. 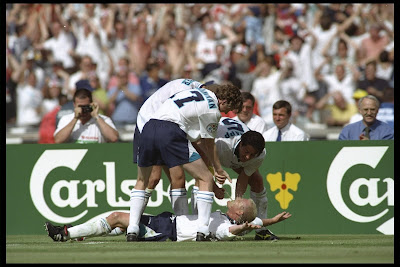 Tipton enjoy their best spell of the game. Nicky Campbell’s pace begins to trouble the visitors’ defence but his partner Nathan Jones, who looked the bees-knees when I saw him at Oadby Town in September, is out of sorts today.

‘The Fed’ can relax on the hour when Wells makes it 3-0 from close range following good work from Harkin.

Tipton start to play. Substitute Morris forces Dunston ‘keeper Poskett to push a long range drive onto the post. They pay the price for a lacklustre first-half display. 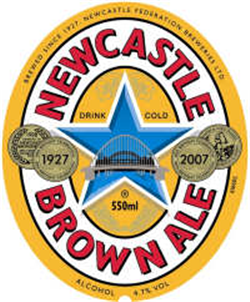 There’s time for some amazing showboating from Harkin. He twists, turns and shimmies his way past two defenders on the by-line, his cross flashes along the six yard area, begging to be finished, no-one can oblige.

Young and Dixon have been par excellence in the engine room for Dunston. They break up play and pass beautifully. This team will take some beating.

The game ends they way it began with a huge roar from the visiting supporters. They remind me so much of Birkenhead outfit Cammell Laird. A group of blokes having a day out with their mates, supping a few pints of Hardy Hanson’s Rockin Robin bitter in the social club.

‘Now then pet, how do you fancy a bit of shopping at the Metro Centre while Sticky goes and watches ‘wor lads’ in the 4th Round of the Vase?”

Attendance: 120 (over half from Newcastle)

Man of the Match: Kane Young
Posted by Sticky at 8:08 AM

what happened to the newark game ?

sorry, change of plan. Wish I'd gone now, as I heard it was a cracker.

Stickster you were right about the Hucknall Rolls winger, ran us ragged ! Did Forest let him go ? Pace to burn and quite skillfull, although seems to have a bit of an attitude on him, probably why he hasn't made it !

Excellent report, Sticky. I was at Tipton myself a few years back and your comments brought back the memories. I have linked to your blog from mine.

Sticky.........it was the kids that had to drag YOU up to the school dickensian evening not the other way round !!!! I have a chief witness in Sticky Jr.

Another entertaining report Sticky. Will you be at South Notts vrs City Boys this Saturday ? SA

Steve A, will try my best to avoid Sth Notts v City Boys, but fear I my be deployed there.

That helmet your wearing sticky? does the wife insist you put it on during love making?

I was with the "Jam Fool" when he rang begging you to come up to the school so he could collect his blow torch !!!! Twisted Fire Starter

Might see you Saturady am if you can't avoid it ! Got the fixture wrong previuosly it's South Notts vrs Barnsley.
SA

All the way to Wembley with The Fed!; I really hope so, as it's my best chance of ever seeing one of my local teams at Wembley.