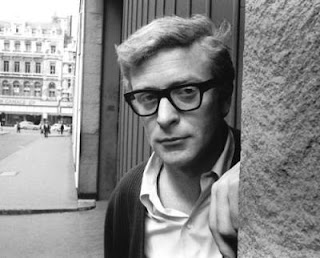 It’s Monday morning and I’m in the kitchen at work making an award-winning pot of tea for two. I let it brew and take a pew. The office door nearly bursts off his hinges as ‘The Guvnor’ (senior manager) breezes into the room. He has a smile as wide as the Dartford Tunnel. He puts the thumbs up. “I’ve two tickets for next Wednesday my old China plate.” (He’s a Cockney).

“Excellent boss” replies The Groundhopper. “How much are they?” “£43 my old cock sparrow.” I feel my chest tighten and gasp for air. Oh well, at least it gave the company the chance to dust down the defibrillator and give it outing. I remember coming round and seeing a sea of eyes peering down on me. “You alright Groundhopper?” I hear a voice shout out. “Er, not really. Who’s going to tell Mrs P I’m spending £43 on a football match.” 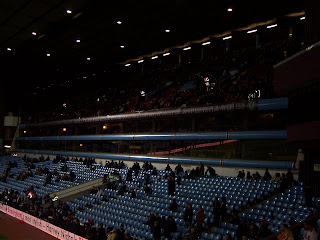 I’ve took the piss since Christmas. I’ve ticked off Stoke, Coventry and Stocksbridge, now an expensive, cheeky mid-weeker in Birmingham. I keep it to myself for the rest of the week, but decide to test the water 48 hours before kick-off. I break the news gently by text.

“Darling, (it’s a good start), Clive (big boss) has blagged some tickets for the Villa v Arsenal game. I might need a financial contribution for my birthday. Can I go?” The reply takes 5 seconds: “How much?” I reply: “Can’t tell you that.” Mrs P replies: “You can’t go then.” It’s time for a wonder strike from Groundhopper: “I love you.” “You still can’t go. Game set and match to Mrs P.

It’s the day of the game. Two nights on the couch is not good for my glass back. It’s been www.coldshoulder.com. I leave the house for work at just gone 7am. I feed Finley (our rabbit). I stroke him and chat to him. Conversation has been thin on the ground since ‘The Arsenal’ text. 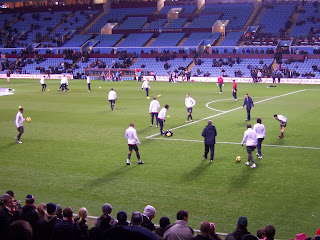 I shoo ‘The Guvnor’ out the door at 5.15pm. He drives his VW Passat like Michael Caine off ‘The Italian Job’. He often opens up the office at work. He drives round the corner into our driveway on two wheels when he’s late. We all whistle ‘Self Preservation Society’ as he gets out of his car.

The Guvnor’s job title is operations manager, which is quite ironic having surveyed the workings of his motor. The glove compartment door is hanging on its hinges, there’s an empty can of oil strewn across the floor and his radio is malfunctioning.

I’ve never seen the guy get flustered; he takes everything in his stride. He’s only ever bollocked The Groundhopper once, when I was told NOT to press a button during a company stocktake, but decided, for a gag, to do it anyway. It brought the entire company to a standstill. 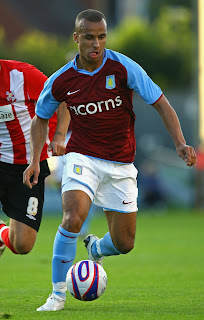 We get held up in the village of Kegworth, close to East Midlands Airport. A Boeing 737 crashed into the motorway embankment on the 8th January 1989, killing 47 people, just a few hundred yards from where we are queuing in traffic.

The journey is simple and unaffected by the rush hour mayhem. It’s down the M42 and M6. We’re parked up in the Salford Stadium Powerleague car park for the bargain price of £4 – security included.

My groundhopping coat, a bargain £34.99 from H&M, makes a welcome return. ‘The Guvnor’ prefers a more upmarket ‘Next’ look. 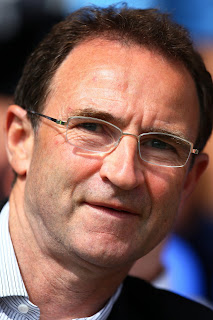 We take a wander past boarded-up houses and deserted high-rise flats, awaiting demolition. I treat ‘The Guvnor’ to some tucker at a burger van, en-route to Villa Park. We have two hot dogs with onions and a couple of cans of Coke. Total cost is £7.

The lady at the van is spooning on the onions when I hear Burslem pub singer Robbie Williams singing ‘She’s the One.’ - It’s put me right off my food.

Aston is in inner city Birmingham and has a population of around 25,000 people. It underwent large scale development after the war – hence the ugly skyline. It’s well known for its university and professional football club. 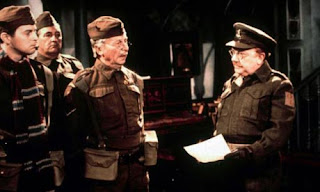 Aston Villa were founded in 1874. The won the old Division One back in 1981 under the shrewd stewardship of wily old fox Ron Saunders. I seem to recall that they only used 14 players all season. The following year Dennis Mortimer lifted the European Cup.

Sticky Palms loved Aston Villa when he was a kid. My favourite player was flying winger Tony Morley, with his quick feet, direct play and inch perfect crossing. I remember him scoring a cracker at Everton’s Goodison Park.

Players to have worn the shirts of both Villa and Arsenal include: the most despised man in the county of Nottinghamshire, David Platt, bookies favourite, Paul Merson and goalkeeper Jimmy Rimmer. 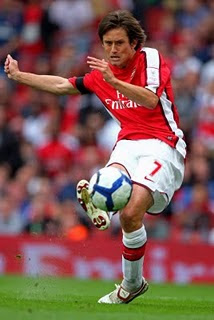 There’s a strong stench of beer amongst the Arsenal fans. ‘The Guvnor’ is on the ‘dog and bone’ to his ‘trouble and strife’. I notice an old man walk by with a Villa steward. He walks with a stoop. It’s only when he gets up close that I realise it’s BBC commentator John Motson, on his way up to the TV gantry.

I’m flicking my way through the programme when I notice a useful piece of trivia: Who scored the first ever Premiership goal at the Emirates Stadium? (Answer at bottom of page). There’s a Q&A with Villa striker John Carew. He lists The X-Factor as his favourite TV programme – surely he should be doing warm-downs when that crap is on? 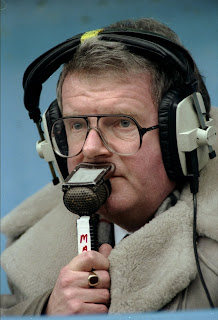 Arsenal are missing the Africans, whilst Villa are without, Warnock and Carew (probably watching Celebrity Big Brother). Nicky Shorey has impressed at Nottingham Forest while on loan and has been recalled. But a right-footed Luke Young is preferred at left back.

The match is a terrific advert for the Premiership. The tempo, endeavour and skill levels do not disappoint. Local boy Gabriel Agbonlahor stings Almunia’s hands in the opening moments. The Gunners respond with an effort from the Brazilian, Denilson, who has started the game well.

Villa’s big cheese (grand fromage) is Stevenage born winger Ashley Young. He teases, torments and terrorises French full back Gael Clichy. His touch is exquisite. His pace is frightening. Young whips a free kick just wide of the upright as Villa grab hold of the game by the scruff of its neck. 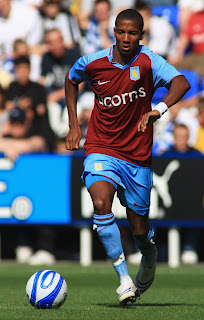 Belgian international, Thomas Vermaelen, is performing like a Sunday morning pub footballer. He’s hacking folk down, being caught out of position and lacking in pace. He’s can hardly walk (through injury) and yet Arsenal let him play on for 20 minutes.

Vermaelen raises the white flag and is replaced by former Notts County legend Sulzeer Campbell. He’s fresh from his day out in the seaside town of Morecambe with the ‘Magpies.’

There’s plenty of banter between the two sets of fans. The Arsenal fans are noisy, but they lack the wit of FC United of Manchester (who I saw on Saturday). Why don’t they sing ‘Chim chim-in-ney chim chim-in-ney chim chim cher roo?’I can’t hear the Villa fans. They are clearly singing, but the acoustics are stuck in a bubble. It’s like they’re miming on The X-Factor. 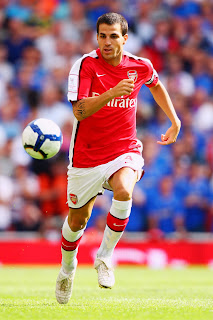 We’ve reached the fag end of the first half ( ‘mystery time’ Motty used to call it) and the game is crying out for a moment of magic. Cesc Fabregas picks up a loose ball in midfield, he drives forward, waltzing past a few flimsy challenges, he feints a pass, draws back his right foot, strikes the ball cleanly, only to see it bounce back off the base of the post.

‘The Guvnor’ needs his caffeine fix. He’s always hammering the percolator at work. He barges his way through a sea of bodies at the refreshment bar, whilst Groundhopper nips to the loo. Amazingly stewards patrol the toilets. The Kenco coffee is £2 per cup – I couldn’t bring myself to sample a cup of turgid tea.

I peer up at the TV screen – Lincoln City (my old team) have conceded a goal at Burton Albion’s Pirelli Stadium inside 30 seconds. ‘We' are managed by a centre forward, with no managerial CV. He’s miserable and incompetent. I am supporting Lincoln United until he is removed from the post. 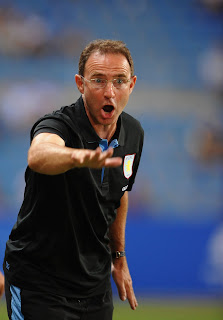 The second half is a privilege to watch. Both sides want to win the game so badly. Villa, always, always look for Young, who hugs the touchline like O’Neill’s assistant, the chain-smoking John Robertson, used to. One of his endless supply of away-swinging crosses eventually finds £12 million Stewart Downing at the far post with the goal at his mercy. He shuts his eyes like a frightened schoolboy and heads over.

Andrey Arshavin has moved into a more central position, as Arsenal persist with their narrow quick-passing game that deserted them in the first half. He wriggles away from his marker, draws Brad Friedel; his shot is beaten away, but falls to the feet of a mostly anonymous Tomas Rosicky, who crashes the rebound against the underside of the bar. 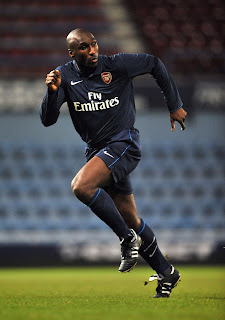 ‘Mystery time’ has reared ugly head. Arsenal have a corner. I don’t do nil nils readers. All my regulars know that. A ball is floated in, for once Villa fail to clear their lines. Notts County reject Sol Campbell strikes a shot on target, it’s just about to find the net when a stray leg diverts the ball away from goal.

How romantic and sensational would have it of been for ‘The Solster’ to notch a winner. For the record he has been magnificent, has have all four central defenders tonight.

Man of the Match: Ashley Young.