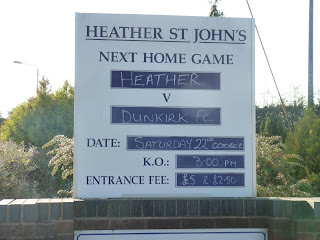 Mrs P’s name is flashing up on my mobile phone. It’s unusual for her to ring me at work. “A bit of good news”, she chuckles down the phone, “I’ve got promotion at work and the boss has thrown in a company car, you can get rid of that scrap heap of a vehicle of yours.”

I hit the red button. I stare into space, dazed, totally dazed. How dare she talk about ‘Sally Gunnell’ like that. A tear rolls down my cheek. I know it’s the end of the road of our beautiful relationship. She scraped through the MOT by the skin of her teeth in August – the car not Mrs P.

I think about our groundhopping trips together. Not once has she let me down on my six year pursuit of non-league football. ‘For Sale, white Citroen Saxo, 1100cc, 66k on the clock, 10 months MOT and three months road tax. £300 ONO.’ 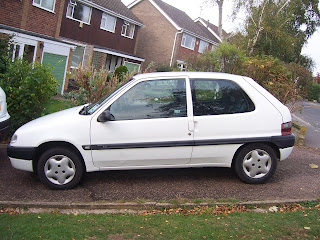 It’s another miserable Friday evening as a beleaguered Lincoln City lose at Cambridge United’s Abbey Stadium 2-0. I’m cheered by the news that my boy Curtis Thompson has been loaned to the Imps by the Pies. He makes his debut on 88 minutes.

‘Don’t Drink On Three Days A Week To Avoid Liver Disease’ is splashed all over the Daily Mail on Saturday morning. I really must apply for a job as a sub editor at this ridiculous newspaper. It would be money for old rope.

Sticky jnr went to a team-bonding carvery at Shepherds in Stragglethorpe last night. Then it was straight up Buzz Fitness for Sizzers 16th birthday party. He’s fagged out and having a lie-in. I’ve done his round again. 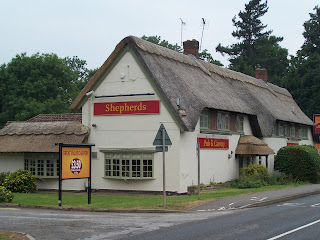 I arrive back home and switch on Five Live’s breakfast news. A reporter from the World Service is peering down at the body of Colonel Gaddafi in a refrigerated storeroom. He describes bullet wounds to the head and chest. “Apart from that he looks fairly healthy”, claims the journalist. “But the bloke is dead, you fool”, shouts out Sticky Palms.

I do some research on the local youth leagues. There’s some clattering and banging about in the garage. A plumber is installing a new boiler. Finley is complaining about the din. How can he concentrate on his crap score predictions? Dunkirk are amongst his favourite teams. He tips the Boatmen for a 3-0 away win.

I nip down the tip in West Bridgford to dispose of an old dishwasher. I view a game of football at the Becket School on Wilford Lane. Mrs P’s Godson is playing. 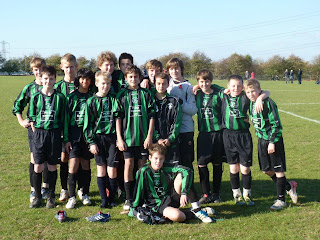 It’s then straight down to Keyworth United’s Platt Lane HQ for a 12.30pm kick-off. It’s déjà vu as Arnold Town are once again the visitors. Last week they knocked us out of the cup on sudden death penalties.

We’re 1-0 down at half-time, unluckily in my opinion. I notice a tall guy out of the corner of my eye mingling with the home supporters. I don’t recognise him. He’s carrying a folder. I won’t be too chuffed if he turns out to be a scout, as he hasn’t had the courtesy to call me or introduce himself to me.

I challenge him. “Are you a scout mate?” “No” comes the reply. “Are you with Arnold then?” “No. I’ll tell you after the match who I am.” Oh bloody hell; it’s only another inspection by the Nottinghamshire FA. I complain after our draw that I was assessed two weeks ago at Hyson Green. He turns out to be a rather nice fella after all. 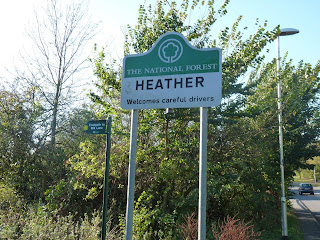 I throw all the bibs, cones and balls into the back of the ‘Rolls Royce’ and shoot off up the A606 and down the A46. ‘Gangsta’s’ team, Wolverhampton Wanderers have clawed back two goals in an exciting lunchtime kick-off at Molineux versus Swansea City on Five Live.

I head towards Coalville on the A50 and drive through the old north-west Leicestershire coalfields. After cruising through Ellistown and Ibstock I sweep down a steep hill and finally stumble upon the village of Heather. I love my village signposts and just can’t resist taking a quick snap of one.

I drive into a busy car park and position the Rolls Royce in an overflow area. A stray football comes flying over the hedge and lands in a nearby field. I squeeze through a gap and retrieve the ball. I hurl it back to one of the Heather players and cheekily enquire if it was one of their strikers who booted the ball. 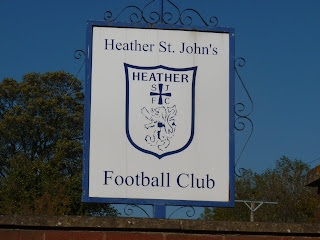 The excellent PA announcer is reading out the teams as I pay my £5 and grab a cracking programme for a further £1. An elderly gentleman pounces on me as I queue for a cup of tea and tray of chips (no it’s not ‘Uppo’). He asks if I would like a go on the football scratchcard. I tempt fate and pick Wolves, even though I’ve never won a raffle or golden goal ticket in six years of groundhopping.

St John’s Park is a snorter of a ground. It has neatly trimmed conifers around the perimeter of the stadium. The playing surface is lush and even. It’s another beautiful late autumn afternoon.

I feel a dig in the ribs. It’s none another than blog legend Ian Upton, the joint manager of Dunkirk. Due to a misdemeanour on the banks of the River Trent, at the back end of last season, the wee man is serving a 10 match touchline ban. 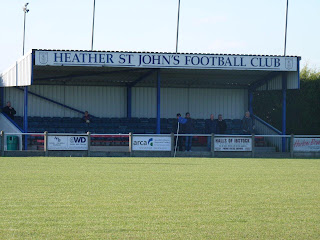 He’s dressed in a grey sweater, striped Polo shirt, blue denim jeans and a pair of brown loafers. His sideburns are distinctive, like Amos Brearley’s on Emmerdale Farm.

I’m excited when I see former Ipswich Town and Nottingham Forest striker David Johnson trotting out for The Boatmen. He’s a pale shadow of his former self. Ravaged by injuries to his back and knee, these days he can barely run. His brain is fully engaged though.

Uppo says a lot of the old crazy gang have returned to the fold. I think he fancies their chances of some silverware this season, if they can keep their cool. 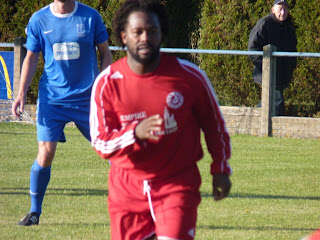 Craig Meakin fires them into an early lead, racing onto through-ball and finishing clinically. Dunkirk are on fire. Anthony ‘Chink’ Gregory is immense on his return from Eastwood Town. He clips a ball over the top of the defence, Lee Day steadies himself and puts Dunkirk two to the good.

Uppo can’t stop chuckling. The linesman on our side is struggling to see because of the sun. Uppo offers him a pair of Foster Grant sunglasses from out of his glove compartment in his car.

‘Jonno’ holds a ball up in the right hand corner and waits for support. Darren Garmston waltzes his way through the defence and smashes a shot in off the post. “Gammo” shouts Uppo, “you should be on Strictly Come Dancing with them quick feet.” 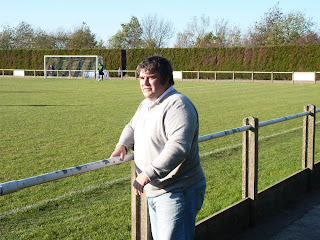 Credit to the Heather St John’s young guns they stick to their task. Twice efforts are cleared off the line, as alarm bells begin to ring in the Dunkirk defence. “We’re papering over the cracks” roars Uppo as the referee blows for half-time.

I take a wander around this beautiful ground, walking past the Main Stand on the far touchline. The PA guy is the best ever, despite playing Queen’s greatest hits. He shouts out the Premier League scores, even broadcasting the goal-scorers. He even dips his toe into the Conference.

Suddenly my ears prick up: “the winning team of the scratchcard is Wolves. Can a Nick Palmer please report to the bar to collect his £10 winnings.” After 6 years I’ve finally done it. I clench my fist and do a little celebratory jig. “You beauty Sticky.” 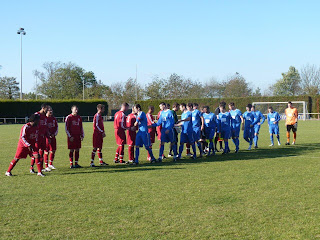 ‘Jonno’ has come off at the break and has joined ‘Uppo’ on the sidelines. I’m impressed that he still has an enthusiasm and passion for the game. I’m amused that Uppo has coached the former £3 million striker in the first 45 minutes.

‘Chink’ puts the result beyond doubt with a far post finish. He looks like Roland Gift, the lead singer of 80s band Fine Young Cannibals. I ask Uppo for a victory salute photo. He wisely declines.

The Saints score what appears to be a scant consolation goal. A mix up in the Boatmen defence gifts them another. Troy Wallen bags his second of the day right on the stroke of full-time. The PA guy plays ‘Tom Hark’ and a James Brown song after each Heather goal. What a class act.

Uppo shoots off. “Need to have a word with someone” he mumbles as I bid him farewell.

Man of the Match: PA Announcer (Sorry Chink)
Posted by Sticky at 6:21 PM

I know what you mean about the Mail: the self-styled voice of Middle England's silent majority is just about the worst tabloid there is - and that it pretends not to be a tabloid is the worse thing.

You can have fun trolling the comments at Mail Online - until they ban you - but it's otherwise not fit for Finlay's cage.

Wow, this piece of writing is good, my younger sister is
analyzing such things, therefore I am going to let know her.