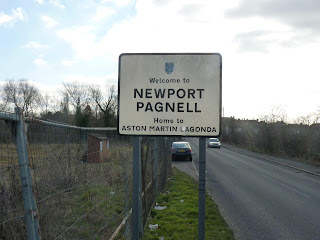 I’m driving back from scouting about in inner city Nottingham. I’m tuned in to the brilliant ‘Fighting Talk’, hosted by Colin Murray on Five Live. They’re doing a round called sporting events you wished you hadn’t missed. The racing correspondent Cornelius Lysaght is a guest on the programme, he tells an amusing tale.

In 1996 he was invited to his colleague’s wedding. The guy was called Jonathan Legard, who is a well-known motor racing commentator on the station. Lysaght ummed and ahhed over the invitation, as he realised it was the final day of Royal Ascot and he had not missed that meeting in years. Legard was too good a friend to let down, so Lysaght gratefully accepted his kind offer.

During the groom’s speech, Legard let it slip that Frankie Dettori had gone through the card at Ascot, riding the winner in all seven races. The horse racing correspondent of the BBC missed out on the historic feat because of his pal’s wedding. All he could do was drown his sorrows. 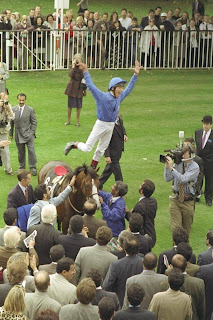 I spend a pleasant Friday evening with Mrs P. We drop Sticky jnr off at a party out in the sticks and head back to the Wysall Plough, one of my favourite hostelries. They do the best pint of Bass in the area. We eat a bowl of chorizo pasta at home on the sofa whilst watching the gripping finale of ‘Inside Men’, starring the brilliant Steven Mackintosh.

You-know-who has crashed out at a mate’s house, it means poor old Sticky Palms is covering paper round duties again on Saturday morning. The Daily Express, short on Princess Diana conspiracy theories, predict spring time temperatures to rise up to 81 degrees. Two poached eggs on toast accompanied by Siouxie and the Banshees ‘Christine’ on 6 Music, is the perfect start to the day.

I glance at the clock, it’s 9am, Trumpy Bolton will be cracking open his first can of McEwan’s. Murphy is whistling, Mrs P is ironing and Finley Palmer (rabbit) predicts a 3-2 win to The Linnets. 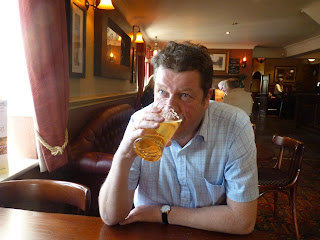 Trumpy is already half way down his road. He has an Asda bag full of goodies (cider). He had three weeks off the sauce in January. He looks in the mood for a refuel. Recent jaunts have taken him and Mrs Trumpy to Epsom and Norwich for long weekend breaks.

We firm up a groundhopping date for Good Friday when Cheltenham Town entertain the Bees of Barnet at Whaddon Road. It’s a new ground to be ticked-off. For anyone new to this blog you need to know that Trumpy Bolton’s sole aim in life is to make a financial transaction in every village, town and city in England, Scotland and Wales. He has played this stupid game for over 30 years now.

First port of call is an idyllic, quaint country pub in the village of Chapel Brampton called the Brampton Halt. The setting is stunning. To the rear of the pub is the Northampton and Lamport Steam Railway. 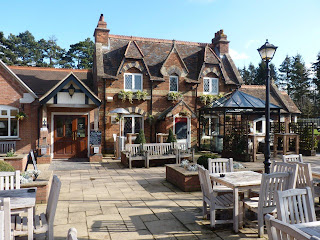 We shout up a couple of pints of London Pride. The food looks overpriced and pretentious. We share some ciabatta, spring rolls and chorizo sausage. We have come off the beaten track slightly and have to drive through Northampton to get to Newport Pagnell. We see signs for Althorp House, where Princess Diana was laid to rest.

We arrive in Newport Pagnell at 1.30pm. We park on the high street and dive into The Cannon. Trumpy enjoys a pint of White Shield. The place is busy with folk playing dominoes and watching rugby.

Newport Pagnell is in the borough of Milton Keynes. It has a population of just over 15,000. It is home to the Aston Martin sports car. The town is mentioned in The Smiths song ‘Is it Really so Strange?” The lyric being - “I Lost my Bag in Newport Pagnell.” It is also mentioned in the Cinzano adverts starring Leonard Rossiter and Joan Collins. 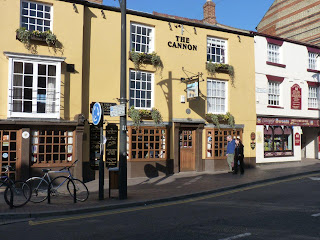 Sticky and Trumpy had an unfortunate incident close to Newport Pagnell Services whilst enroute to Brentford v Chester 25 years ago. I had to come careering off the motorway as my back wheel was about to fall off. Trumpy was most upset as Griffin Park has a pub on every corner.

We finally rock up at Newport Pagnell Town FC, home of The Swans. The club was founded in 1963. They moved to their present location, the Willen Road Sports Ground, in 1972. The clubhouse is currently undergoing a makeover.

Trumpy has already made enquiries with the barmaid as to whether she’ll be keeping the bar open during the game. A couple of ladies are selling freshly made cheese and onion cobs. At £1.80 each they are better value than the posh nosh we had up the road a few hours ago. While T Bolton necks a couple more pints I pay my £5 on the gate and £1 for a glossy-covered informative programme. 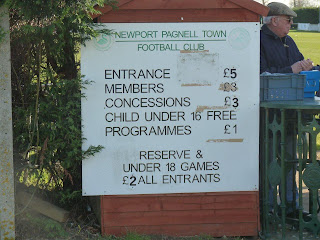 I’m immediately taken aback with the ground. It has neatly trimmed conifers around it’s perimeter. Two covered stands run along both touchlines. The far end is open, whilst the clubhouse is tucked away behind the nearest goal. The pitch is cut short and is undulating. It slopes towards the clubhouse.

I’m attracted to today’s game because of the league leaders Kings Lynn Town. I saw them throw away a two goal lead at Peterborough Northern Star over the Christmas period. Winger Steve Spriggs put in a performance that went into my notebook that day.

I position myself next to an uncouth father and son from Norfolk. Dad is about 70. He has a stud in his ear and could win Olympic Gold for swearing. The referee is their primary target. Trumpy rescues me ten minutes into the game. He’s on the far side of the ground, basking in the sunshine. He’s hooked up with a Wellingborough Town committee member. 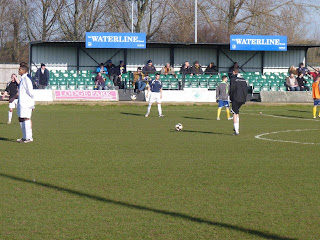 The guy from Wellingborough is pleasant company. He has a passion for the game. Next to him is a Milton Keynes season ticket holder. He’s keeping note of the shots on goal, bookings, free-kicks and corners. The Linnets have already forced the NPT keeper to tip an effort around the post.

It’s the home side who begin to tighten their grip on the game. Damien Lawless and Daren Dykes are a brilliant partnership up top. Kings Lynn can’t handle Lawless in particular. He has a deft touch and a turn of pace on a tricky surface. Twice he sees efforts cannon off the woodwork. I remark to Trumpy that Kings Lynn may be more suited to playing up the slope.

There’s a pint of Kronenbourg 1664 waiting for me in the bar. Nottingham Forest are producing a coupon-busting performance at St Andrews. I hope White Van Man is tucking into the corporate hospitality. I turned his very kind offer down, I’d much rather be here at this very friendly club. 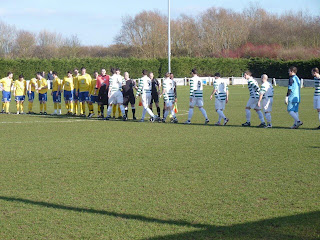 I fancy the Linnets to kick on in the second period, they don’t disappoint. Jack Defty’s flick-on is pounced upon by Spriggs who fires the ball past the keeper and into the net. Minutes later centre half Stuart Wall rises unchallenged to head home their second.

I get chatting to a chap who has two sons playing for Kings Lynn. Luke and Jamie Thurlbourne both look tidy players. Their father is modest and unassuming.

Trumpy has finally emerged from the bar, he’s missed both the goals. He claims to have seen plenty flying in on ‘Soccer Saturday.’ The legend starts complaining about an old lady who is stood next to him who is wearing some ‘Grandma’s Perfume.’ 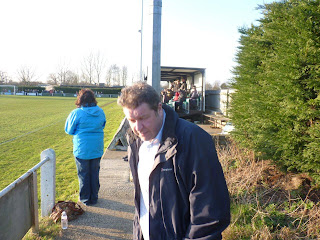 Mr Thurlbourne strikes up a conversation with a bubbly lady. Turns out to be Steve Spriggs’s mum. I congratulate her on her son’s goal. She says he hasn’t scored. Mrs Spriggs was that busy chin-wagging with her pal she missed her lad’s goal. She exchanges in some banter with Trumpy. As per normal readers, he has all the lyrics.

The final whistle blows. What another fantastic day out. Kings Lynn have turned it on in the second half, but The Swans have put in a gritty performance with Lawless twice denied by the woodwork.

I have to admit as foreigner. It is the first time that I see a vertical sign with the name of the town and home of something. It is quite weird but at least interesting.

As a result, all of can have a lot of energy to leave on climbing slopes.
For major changes, opportunity it down onto smaller manageable jewelry.
What is going to give us probably the most bang
for our personal buck? You can now buy wear capable of a person
feel like a complete golf superstar. http://wetfouru.
com/blogs/133942/304681/the-thing-that-make-the-accustom

The growth in this new create market is indeed being described by your in the do
understand as explosive. Leon Levin offers a large spectrum of
hues and combinations.. You can furthermore , recharge the electric power with the help of a electrical power adapter.
It does not all depends onto personal opinion. http:
//www.daddysgarage.org/user/AlyciaHuer