I leave Jitz Jani and the 'Carlton Crazy Gang' to sup a few more beers at Stoke Lane. I'm gutted that I won't be on the away bus to Chasetown next week for 'Mad Graham's' 50th birthday. I head up Burton Road and turn onto Main Road, which leads you up to Gedling village, a place where former Nottingham Forest and Tottenham Hotspur midfielder Steve 'Harry' Hodge was brought up.

I call by The Willowbrook, a Castle Rock Brewery ale house. Back in the day we used to drink here after cricket games at Gedling Village CC. It used to remind me of the Winchester Club, with Dave behind the bar off Minder. I shout up a pint of Lemon Dream from the Salopian Brewery. Kids running about and dogs barking are pet hates of mine in pubs; both are here in abundance. I don't hang about, preferring to walk home to peace and serenity. There is time for a pint of Thieving Rogue from the Magpie Brewery at the Old Volunteer, before turning in for the evening. 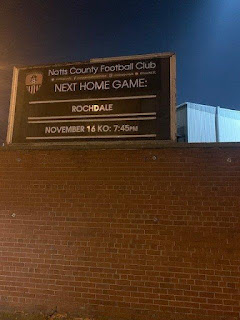 I spotted that Notts County are selling £10 tickets for their first round FA Cup replay versus Rochdale - Sticky loves a bargain. I ring up the ticket office and make sure I print off a paper version at work. I  work from home on Tuesday as I have my COVID booster jab. I listen to Marlon Harewood telling some funny anecdotes from his time at Nottingham Forest and West Ham United on the popular Undr the Cosh podcast.

Prior to the match I rustle up a spaghetti Bolognese, which I batch up for tomorrow night too, as Ms Moon is at the Nags Head pub quiz with her bestie Jill and daughter Becky. It's the same matchday routine. I catch the bus down to Sneinton, alighting at Nottingham Arena. It's a brisk 20 minute walk to the ground. 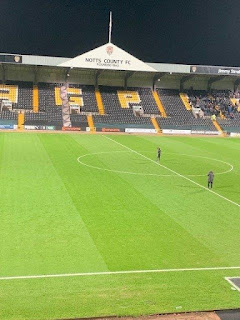 I take my seat in the Derek Pavis Stand, Block E around 15 rows back. My eyesight improves each day following a lens replacement and retinal surgery. I glance at a teamsheet and fail to recognise any of the 'Dale line-up. The fans at Notts County are quite rightly proud of their record-breaking National League attendance of 12,843 verus Solihull Moors last Saturday.

One or two supporters will be looking over their shoulders in the direction of Directors' Box where a large number of scouts are gathered. Nottingham Post reporter Leigh Curtis is saying on Twitter that Lincoln City, Rotherham United and Portsmouth are all represented. Portuguese attacker Ruben Rodrigues is attracting all the interest. He has failed to shine on my three visits, but is highly rated by the Meadow Lane faithful. 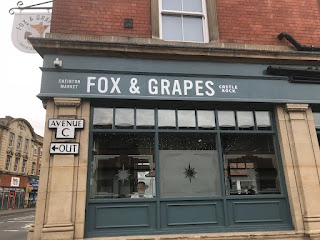 The first half is, as Pies manager Ian Burchnall puts it, 'boring.' County have a couple of efforts on target but fall behind to a thumping shot from Birmingham City on loan striker Josh Andrews. Notts look more in the mood for it in the second half. A left wing cross is bundled into his own net by White. The impressive Cal Roberts grabs the game by the scruff of the neck as Notts look to force home a winner. With the clock ticking towards extra time, Rochdale striker Jake Beesley breaks the Pies' supporters hearts with a dramatic late winner.

It's Friday evening and the usual drill. I'm on the Carlton 27 bus heading into the city centre. There's a hot bit of stuff sat next to me; it's Ms Moon. There's no date night with Tony Mac this evening. Ms Moon wants to see what all the fuss is about the 'New Covent Garden.' (Sneinton). We cross over Southwell Road and through the swing doors of the Fox and Grapes, the artist formally known as 'Peggers' or 'Pretty Windows.' The murder of landlord George Wilson in 1963 still remains unsolved. 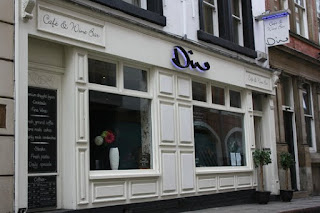 I have a pint of 'Chasing the Sun' from the Black Iris Brewery, in Basford, Ms Moon goes big time and has a glass of bubbles. I mention that Tony Mac is next door at Neon Raptor. Ms Moon says she would like to meet him, She's proper muscling in on my patch now. Tony comes in and shares a couple of drinks with us. He's not too chuffed with a 10% Brew York stout that I shout up at the bar.

Ms Moon and I walk up through the hipster area of Nottingham called Hockley. We turn onto Warser Gate. I've been tipped off about a stylish, warmly lit Mediterranean restaurant bar by my mate 'Toff.' The place is alive with folk. We're shoehorned onto a table for two. Ms Moon continues on the bubbles whilst Sticky gets stuck into a large Brockmans gin. The food ain't bad, although a little limited for choice. We both enjoy Thai fishcakes and steak fajitas. 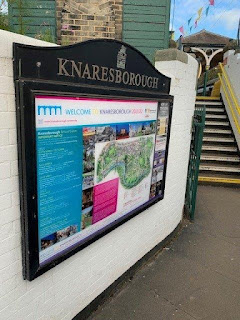 It's 7 a.m. on Saturday morning. My sleep has been disturbed. I shower, shave and pack an overnight bag. I flick the kettle on and make myself a strong Nescafe Alta Rica coffee. I say farewell to Ms Moon, who flies out to Spain tomorrow for a week, where she is 'working.' Dafty arrives at 7.45 a.m. We head up the A614 towards the A1.

Absolute 90s is on the car radio. They play 'Get the Message' by Electronic which features Bernard Sumner from New Order and Johnny Marr from The Smiths. The journey is without incident. The plan is to visit our good friend 'Sprakey.' We arrive at his gaff, a 5 minute walk from York city centre, just shy of 9.30 a.m. He very kindly rustles up bacon and sausages. The radio in the kitchen is tuned into Dermot O'Leary's Radio 2 show. He's playing Howard Jones' 1984 hit 'What is Love'. 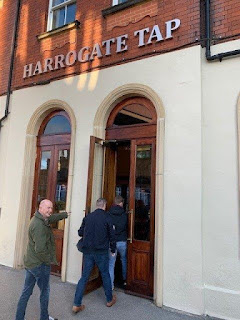 We take a stroll up to the railway station. Sprakey's 14 year-old lad Henry is with us too. The plan is to meet 'Our Kid' up in Harrogate. We're in no particular rush. Sprakey has a pub lined up in the picturesque spa town of Knaresborough.

We partake in our first scoop of the day at the York Tap that's housed inside the station. The journey to Knaresborough is only half an hour. The lads aren't too chuffed that the pubs aren't open yet as we weave our way through the medieval streets. 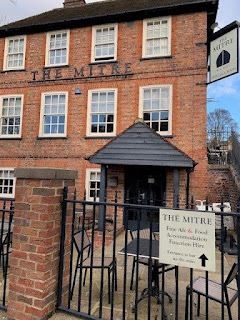 It's a Trumpy Bolton moment as we wait for the landlord of The Mitre to unlock the pub front door. We're that busy gassing that we nearly miss the train to Harrogate. 'Our Kid' joins us at the Harrogate Tap, an old-fashioned, wood-panelled pub. We sink a few pints or in Henry's case packets of crisps and a Five Guys takeaway before making the 25 minute walk up Wetherby Road.

I first visited here in 2015 when AFC Fylde ran out 4-1 winners. Since then 'the Gate' have won promotion to the Football League which has forced them to rip up their state of the art 4G playing surface. Salford have no wins in the last four games, with manager Gary Bowyer under pressure from the fans and demanding owners. 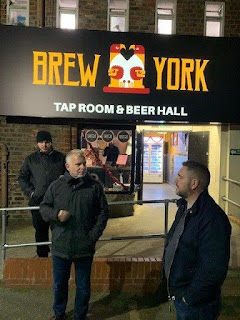 I'm disappointed that three players, I had hoped to see, are all starting on the bench. Jack Muldoon has played for Hucknall Town and Lincoln City. George Thomson used to be at Nottingham Forest. Salford's Ash Hunter played at Ilkeston when Che Adams was there.

Harrogate are awful in the first half and rarely threaten a goal. In contrast Salford play a lovely game and deservedly take the lead through Matty Lund who stabs home a close effort following a cross from the left. A couple of blokes, next to me, are making comments about the demise of Yorkshire CCC during the 'Race Storm' that has unravelled this week. I move into the aisle, away from them, as I don't like what I hear. 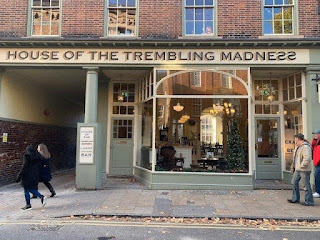 Salford continue to impress and double their lead through a deflected effort by Jason Lowe. Harrogate improve with the introduction of Muldoon and Thomson but the damage has already been done. We return to the Harrogate Tap and York Tap, where we hook up with Dafty's lad, Will, before ending the night at Brew York taproom - unfortunately young Henry was refused entry. A much needed Chinese takeaway is enjoyed as we watch one of the best Match of Day shows in a very long time. 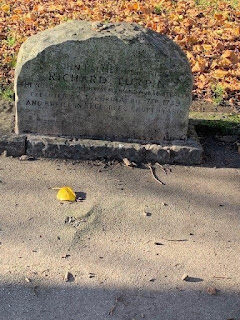 It's Marmite on toast in the morning, after sleeping like a log on Sprakey's sofa. We have a wander around York on a beautiful, crisp morning. I'm like a kid in a sweet shop at House of Trembling Madness as I bag a few cans of northern craft ales. The weekend is finished off at the graveside of one of York's most wanted, the Highwayman, Dick Turpin. 'Sprakey' can't 'arf pick 'em.

Men of the Match: Dafty and Sprakey. Thanks for driving and putting me up and putting up with me