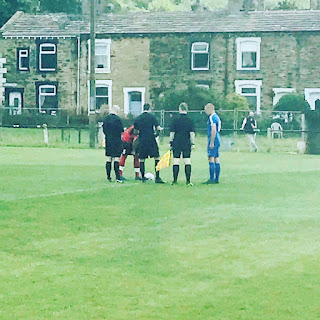 It's Friday the 18th May, 'North' and West Bridgford are swarming with a sea of Sky Blue scarves and shirts, as Coventry City and their huge away following, pack out the Trent Bridge Inn, Southbank Bar and The Embankment (Jessie Boot's first dispensary). They have been fortunate to come away from last Saturday's first leg play-off game at the Ricoh Arena with honours even, after a last-minute miscarriage of justice. The Pies' full back, Matt Tootle, wins the ball as clean as a whistle on a greasy, rain-soaked surface. The buffoon of a referee deems otherwise and points to the spot. Notts' owner, 'Big Alan Hardy' is incandescent with rage and shoots from the hip on social media (a regular occurrence). He fires out more tweets than Donald Trump.

I sit in the Derek Pavis Stand with 'Bruiser' (Forest fan) and his Dad and view proceedings. Kevin Nolan's route one tactics are baffling and Stan Laurel head-scratching, as Coventry gain momentum and possession, to race into a two-goal lead. To their credit, Notts fightback and are cruelly denied an equaliser, with Jonathan Forte incorrectly flagged offside by another bungling official.

I've been sat next to three lads who wouldn't be out of place in the Harlem Globetrotters basketball team. They show no interest in engaging with me at the break. I smell a rat. It all becomes apparent when Coventry seal Notts' fate with a decisive winner-takes-all third goal. The guy next to me starts fist-pumping and his actions are quickly recognised by the baying-pack of Pies' fans sitting in the vicinity. I fend off a few hooligans who offer the infiltrators outside for fisticuffs. They are soon scurrying back down the stairwell when the three lads stand up - not one is below 6'5". I whisper in the ear of one of them that it might be best to skiddadle, before they are lead out by 'Norris Cole' one of the stewards. 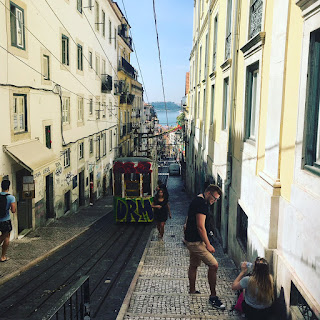 The football season is over. We enjoy sun-soaked evenings sat in the back garden, on our new outdoor furniture, reading, chit-chatting laughing and drinking copious amounts of alcohol - like most of the country. We bask in the glory of relative, unexpected World Cup 'success.' I'm gutted when we're paired with Croatia in the semi-finals, as I've had a £5 each way bet on the Eastern Europeans, as the lads at the car wash had told me they were nailed on at 33/1. England run on an empty tank in extra time - but the country is lifted in desperate, gloomy uncertain times - the feel-good-factor can't last forever.

I enjoyed some sun on my back in Lisbon. Whilst the lads pounded the fairways of the local golf courses, I jumped on the train several times to make the 40-minute journey into Portugal's capital. They were still sweeping up the debris in the streets after Ronaldo's astonishing hat-trick versus Spain a few days earlier. The Mayor of London and I found a cosy backstreet bar in the Bairro Alto district of the city. We watch an unconvincing Portugal struggle to beat an impressive Moroccan outfit. 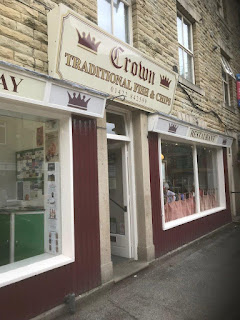 I've been planning this year's groundhopping schedule for months now. I've seven grounds left to complete the 92 League grounds - there's an outside chance that it could be this season. I'll keep Pompey in the back pocket, as I wouldn't mind finishing off at such an iconic ground, steeped in history and tradition.

Nelson - or 'Little Wembley' as the locals call it, has been on the radar for ages. Ms Moon has a hen night, so is unable to make the team bus - White Van Man and Big Ed are drafted in, with it being a blog debut for the latter. 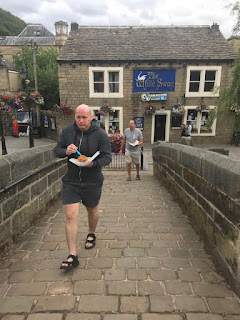 I meet Ms Moon on Friday tea-time in the Crafty Crow, close to Nottingham Castle and quaff a couple of real ales. I'd earlier popped into Weaver's, a wine and spirits merchant on Castle Gate, where I bagged a bottle of Pickering's Original Gin. I enjoy a few stiff ones in the back garden whilst Ms Moon catches up with the soaps.

The tropical rain disturbs my sleep at dawn the following morning. I fill up with diesel at Morrisons and get the car washed by the Eastern European lads, who I generously tip after the Croatian World Cup journey. 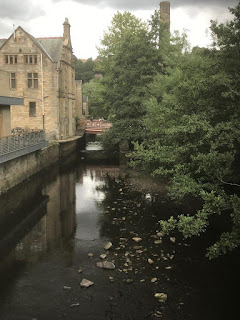 I make the short trip over the water to Big Ed's house in Clifton Grove. I hear rubber burning and a radio blaring out as White Van Man (Starsky and Hutch style) parks up his vehicle. We chew the cud on the best way to head up to Lancashire, as I want to avoid the M6 like the plague.

White Van Man adjusts the front seat; he's almost lying horizontal, Big Ed sits in the back as quiet as a mouse. I've done my research folks, as the Big Man loves his fish 'n chips. Sadly the best chippy in the world, Grandma Pollards, close to Todmorden, just off the M62, is closed for a week. 6Music presenter Stuart Maconie recommended that chippy in his Pies and Prejudice book. 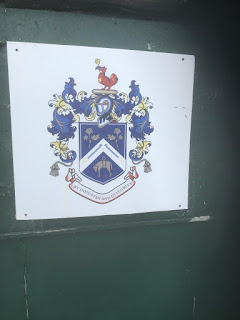 I fancy a shufty around the Upper Calder Valley town of Hebden Bridge. We park up on the High Street and peg it up to the Crown chippy as WVM's stomach has been rumbling for a while now. The Big Man is salivating and chuckling as he orders up pie, chips and gravy. Ed and I sample the haddock, which we eat on the bridge admiring the views of the River Calder and Hebden Water.

WVM's pie vanishes quicker than a Trumpy Bolton pint of real ale. He eyes up a custard pie at a nearby bakery - even I get in on the act with a vanilla custard slice. We jump back in the car. I nearly wipe out two cyclists at a junction, as we head out of town and onto the moors. They were pedalling that quick they were probably taking illegal substances, as you do in that 'sport.' 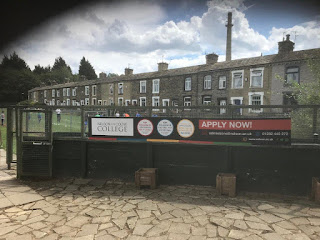 Sat Nav takes us on a death ride across the moors - I feel like punching it in the face. I barely get the car out of second gear - it's like a scene from Father Ted when Dougal can't go over 5 mph in the milk float (a Mickey take of the film Speed) I'm sweating like a good 'un by the time we park outside Victory Park.

Nelson is in the Borough of Pendle, in Lancashire, close to Burnley. It has a population just shy of 30,000. It was a mill town during the Industrial Revolution. In the 20th Century it was well known for making confectionaries such as Jelly Babies and Victory V. 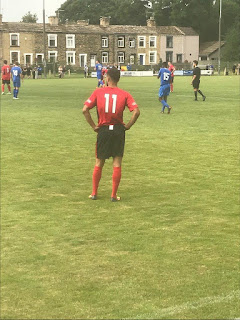 Notable folk to have been born or lived in the town include: West Indian cricketer Learie Constantine, who played for Nelson CC between 1929 and 1938 (a life covered in a brilliant book by Harry Pearson), footballer and manager Mike Phelan (lovely bloke, stopped in our hotel in Portugal once), actor John Simm, from Life on Mars, antiques expert Eric Knowles and Emmerdale Farm actress Nicola Wheeler (contact Ms Moon or White Van Man for further details).

We wander up a path to be greeted by two lads on the gate. It's £5 in (thanks lads, and for lunch too). There's no sign of a programme or teamsheet; it is only a friendly after all. The ground is a little belter. There's a low-roofed green-painted wooden stand running alongside the furthest touchline. On the opposite side are the dugouts, with the backdrop of twenty or so grey-stoned cottages. The furthest goal is dwarfed by huge trees that sway in the stiff breeze that is blowing in some inclement weather. Nelson FC were founded in 1881. They were a founder member of the Third Division North of the Football League, before losing their Football League status in 1931. Former Liverpool manager Joe Fagan has played for the Admirals.

We do a customary circuit of the ground. Big Ed dives into the clubhouse for a cup of  Maxwell House. I take a gleg at all the memorabilia and press cuttings pinned onto a noticeboard. Ramsbottom are a couple of leagues above Nelson, so will fancy their chances. We had to bail out from visiting there with Ms Moon when her Audi A3 clutch gave up the ghost. 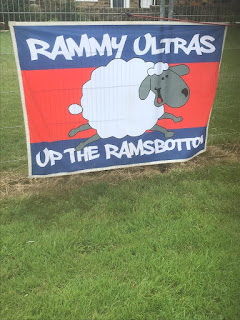 WVM is still spewing at my pathetic attempts at driving across the moors - we'd have been here in half the time had he been behind the wheel. He shouts out I'll be walking home if it's 0-0 just as Rammy open the scoring on 30 seconds after a breathtaking move and raking pass out to the wing. - "I can't half pick 'em Son".

Lord knows what 'Big Ed' thinks about watching one man and his dog, when his team, NFFC, average over 20,000 - he seems to be enjoying it though. Nelson restore parity. The Nelson Twitter account has caught my attention and has us in stitches here are a few tweets: 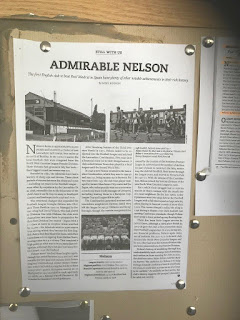 "2pm ko today, so the boys are back in time for Love Island."

"30 secs gone 1-0 to Rammy, 'keeper should have done better #poppadomwrists

"Gaz Lloyd turns up late on half-time after a round of crazy golf with his Mum."

Lancastrians are well known for their sense of humour. Ramsbottom put the game to bed after a defensive faux pas, and are 3-1 up by the time we're on the M65 heading back home.

Man of the Match: Nelson Tweeter.