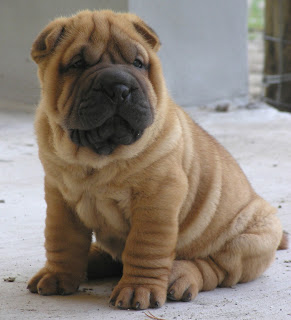 It’s Friday August 20th. It’s day ten of our summer holiday in the Algarve. Gangsta, Will, ‘The Skipper’ and Sticky junior are larking about in the pool. I’m sprawled out on a sunbed, under an umbrella, avoiding the baking heat.

I’ve succumbed to a horrid heat rash. The lady at the local chemist said it was the worst she’d ever seen – I don’t know if she was referring to my pot belly, treble chin or rash. I’m going stir crazy. I can’t swim or sunbathe because of this damn ailment. 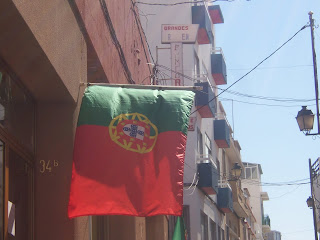 I’m combing my way through an English-translated Portuguese paper, when suddenly my eyes light up. Local football team, Portimonense FC, have been promoted to the Portuguese Primeria Liga. They have a tea-time kick-off on Sunday against Naval. The town of Portimao is 30 minutes up the road. I can jump on a bus and still be back for evening dinner at O Lanterna.

I cough a couple of times and clear my throat: “Darling, I might not be here for the pool-side bingo on Sunday evening, can you call the numbers out?” Mrs P replies “If you’re thinking of going to a football match while we’re on holiday, you can pack your bags now and clear off home.”

I jump on the bus to Portimao. Everyone is in bed still. Sticky Palms needs to do a reconnaissance. 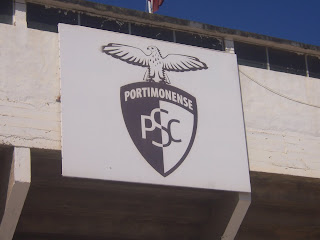 A café bar owner in our resort has tipped me the wink that the ground is being refurbished and the game might be held at Estadio Algarve near to Faro. The last time we came to Portugal, Jamaican rapper Sean Paul and Scottish new wave band Simple Minds played to sell-out crowds there.

Portimao has a population of 40,000. It is well known for sailing, power-boating, motor sport and beach soccer.

I pound the streets of this southern coast town. After three hours of non-stop walking and puffing and panting, I notice a brown tourist sign with a football painted on it. “Bingo.” 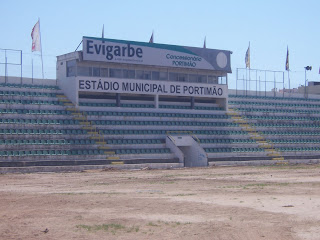 I walk into the middle of the ‘stadium’ – I use the word stadium loosely. It’s a building site. There’s Bob Hope of a game being played here on Sunday. There’s not a blade of grass on the pitch – the Forest Recreation Ground in Nottingham is in better shape.

I catch the bus home. I pass another stadium – perhaps it’s the new one. If the game is at Faro, I’m snookered. Never mind Sticky, it was a good effort. At least it’s saved your marriage, for now.

It’s Sunday morning. I’ve had a wretched night, in Guest House Paradiso, in Royal Crescent, Whitby, on a lumpy mattress, in my single room. At least Dracula didn’t show up. 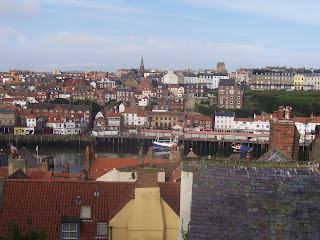 Bruiser, Widdow and Groundhopper pile into the car. We head home. The ‘youngsters’ insist we have the sexy, husky voice of Radio 1 Dublin born DJ Annie Mac, on the car radio. She’s not my cup of tea and the music is rubbish.

At least we don’t have to make numerous toilet stops for Bruiser (Captain Slackbladder), who for once manages to control his water works.

I saunter through the house at midday and immediately announce that I’m off for a lie down. It’s not gone down too well with Mrs P, though folks. 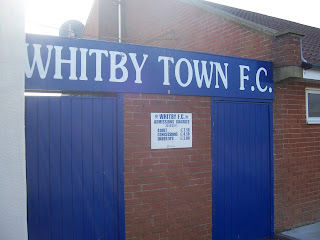 It’s Tuesday morning and I’m sat in my swivel chair at work, keeping an eye on the vital County Championship cricket match between Notts and Yorkshire on the desktop scoreboard.. The Auctioneer sits adjacent to me; he is a massive Tyke’s fan.

It’s lunchtime and I’ve lost all interest in the sport of cricket. Notts have been skittled out for a miserly 59. I’m never going to Trent Bridge again.

I phone The Taxman to check on his availability for tonight’s EMCL game. There’s been a slight domestic incident in his household – the fool has forgotten that today is his wedding anniversary.

He’s rushed out to the cheapest florist in the village and bought a reduced £2.99 bouquet of Chrysanthemums. Mrs Taxlady is not appeased by this peace offering. She tells me “not to rush back” when I pick up her husband at 6.45pm. 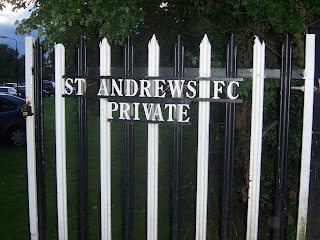 I take the Mick with my groundhopping but I would NEVER go to a game on my wedding anniversary – well not an evening kick-off.

I remember the 17th Sept 1996. My old team, Lincoln City (before that buffoon Chris Sutton was in charge) had a home cup tie against Manchester City. I didn’t even dare ask for the green light to go. We won 4-1. My all-time hero Gareth Ainsworth was brilliant. I often bring that one up when the good lady questions another groundhopping outing.

The tales of woe come thick and fast from The Taxman, as we travel down the A46, M1 and outer ring road – thank God it’s a short journey. I lend a sympathetic ear and turn down the volume on Five Live’s Switzerland v England preview.

Sat Nav appears to take us down a dead end and into a meadow. I can see the players warming up between a gap in the hedge. 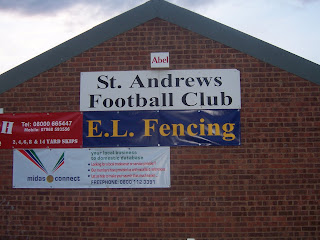 It’s £3 admission, with no programme issued on a school night. The gateman recommends I shift my car from the outer car park and drive it onto the ground.

There’s very little signage to take photos of, but it looks a pleasant enough ground. We stand to the left of the home dugout. Opposite us is a small stand. Conifers tower over both goals.

Bardon Hill are a slick outfit; although they hit freefall at the business end of last season, having topped the table for the majority of the year.

I receive a text from ‘The Skipper’ on 15 minutes which just says ‘Rooney’ – nice to see the scallywag Scouser making back page headlines for a change.

Bardon take a deserved lead on 30 minutes through a strike from White. They spurn further chances to extend their lead. 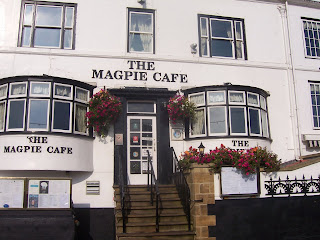 A Shar Pei dog has been let loose down our side of the ground. He seems a friendly sort, but has taken an instant liking to Groundhopper’s trouser leg. It’s making me nervous. I suggest to The Taxman that an early brew in the clubhouse might be worthwhile.

We are served tea by an attractive strawberry blonde. We can’t mark the tea as no teapot is involved. It’s what’s known in the trade as a DIY brew.

Sky are showing Rooney’s goal over and over again. I’m more interested in the blackboard on the wall which advertises in chalk that Rosie and Coleby are having a Pirates and Princess party. Gangsta and Will would love that.

St Andrews centre half looks like Spanish shaggy-haired defender Carlos Puyol. He’s half decent too and is having a terrific tussle with Bardon forward Paul O’Callaghan. 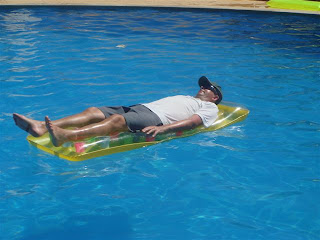 It all kicks off on the hour when the lineman rules that the ball is still in play. Bardon score from the resulting cross. St Andrews manager’s veins are sticking out his neck as he calls the referee an effing disgrace. The left back calls him an effing joke (he’s sent off) and the captain sarcastically suggests that the ref drops down a couple of leagues after his “12 week break.”

I wish they’d get that bloody dog on a lead, I’m sure he’s got a whiff of Finley’s scent on my jeans – we had a little cuddle before I left tonight.

Bardon bang another one in. The game is ended (for us) on 70 minutes with a serious injury to the excellent Paul O’Callaghan, who complains he can’t feel his neck.

The paramedics appear unrushed, despite arriving briskly. The referee is toying with the idea of abandoning the game. We take a straw poll, which decides on an early exit to the Plough Inn at Normanton-on-the-Wolds for a pint of Timothy Taylor’s.