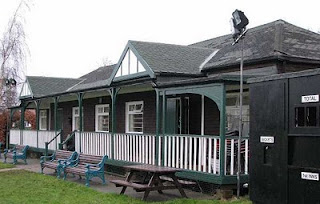 I’m in the office at work. I’ve just made a ‘four bagger’ pot of tea. It’s quality. I notice my mobile vibrating. On the display it says Mrs P is calling in. It’s unusual for her to contact me during working hours, unless it’s to check that I Sky Plussed Wild at Heart in HD.

I nervously and hesitantly take the call. “I’ve got some bad news for you” says Mrs P. Oh my god, hope the kids are alright, that nothing has happened to the in-laws, or God forbid, Finley Palmer (rabbit) hasn’t escaped from his cage again.

“I’ve had a mishap with your tea pot; it has fallen to the floor and is smashed to smithereens. I feel the back of my throat dry up. My heart beats ten to the dozen. I press the red button on my phone and cut Mrs P off. 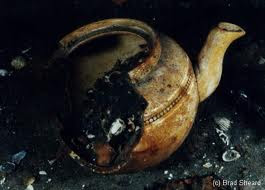 A tear rolls down my cheek as I think of the good times me and that teapot have had. It was one of those little brown ones that your Granny used to have. I think back to the fantastic brews we have shared over the five years of its short life. I remember a particular good mash, one cold and bleak Saturday, back in February 2006.

I know that it wasn’t a malicious act that Mrs P carried out, but I can’t possibly speak to her right now. It’s a day of mourning. Mrs P rushed out to replace it with a black and white spotted one. But it’s just not the same.

It’s Saturday morning. I’m 47 today. I overindulged on the red wine last night and feel slightly worse for wear. I’ve a few schoolboy games to scout this morning. I wind the window down as I head into Nottingham, for some much needed fresh air. 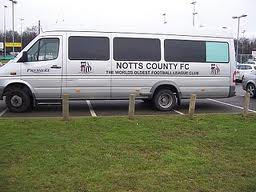 Brian Blessed is shouting and yawping on Five Live. The presenter tries his best to prevent the ‘Bearded Wonder’ from swearing.

I finally end up down at the Highfields University Sports Fields. Nottingham Schools are handing out a good hiding to their Derby counterparts. I notice that bungling fool, Roscoe, (son of Big D) is in the nets for the u15s. We exchange pleasantries before I have a de-brief with my boss from Notts County.

I had earlier in the morning bumped into Justin Evans (‘Cookie’) who plays for Gedling Southbank. I josh with him that he’s had more clubs than Robbie Keane. He’s one of those characters you could only find in Nottingham. Back home Mrs P has very kindly knocked up some carrot soup with bread and cheese. ‘The Skipper’ hasn’t got a game on today. I’d whizzed down to the Nottingham Forest FC earlier in the morning to purchase a ticket for the game against Watford. I was getting some peculiar looks as I was queuing up to pay. It was only when I walked outside that I realised that I’d got all my Notts County clobber on.

Mrs P is off to watch Junior down at Regatta Way in West Bridgford. He has a rematch up in Gainsborough next week and has a few old scores to settle with some moron who tried to snap his legs in two with a horror tackle.

I’m in ‘Sally Gunnell’ and on my way to Chilwell to watch a game. I switch the radio on. The vastly underrated Sunderland midfielder, Greenwich born Kieran Richardson, has given the Black Cats the lead at the Britannia Stadium. 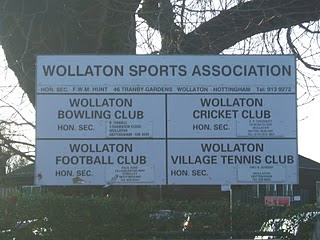 The wind is whistling, the skies are darkening and the rain begins to beat down on my windscreen. I’m on the characterless and soulless Clifton Bridge, on the Nottingham outer ring road. I drive past Evans Halshaw, Showcase Cinema and the ten pin bowling alley.

The road towards Beeston is clogged up with traffic. I park up and spot a coach from Plumtree Cricket Club, who has come to watch his lad play. I view my game. The player I’ve come to watch doesn’t disappoint. He’s aggressive and competitive.

Time isn’t on my side, nor Sunderland’s, they’ve gone down 3-2. Jimmy Armfield is summing up the game for Five Live on their lunchtime broadcast. He doesn’t waffle on like David Pleat tends to. 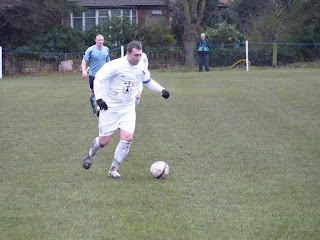 It’s gone 2.30pm when I pull up adjacent to the Wollaton Sports Association. It’s exactly 47 years to the nearest minute since I arrived in this world at the Bromhead Hospital in Lincoln.

Wollaton is a village in the west of Nottingham. It is home to Wollaton Park which has a museum, deer, lake and golf course. The Park housed Prisoners of War during the World Wars and USA serviceman.

As mentioned in previous dispatches Mr and Mrs P had their first date in the delightful Admiral Rodney public house, which is situated opposite the ground. 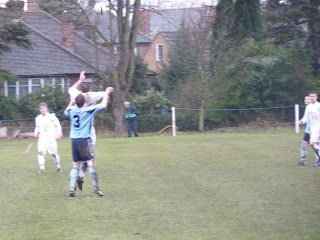 Calvin Harris and The Pet Shop Boys topped the bill at the ‘Splendour Festival’ in Wollaton Park last summer.

It’s my first blog of the season in the NSL. I’ve only the Notts Police to visit to complete a full set. I often browse the best message board in the world. Gossip is rife that one or two are jumping ship to the newly formed Central Midlands League South for the 2011/2012 season. 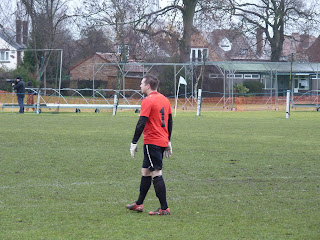 Forest Town bit the dust after four month rollercoaster ride. It is said that they felt unloved and unwanted. I was always suspicious of their arrival, it created, in my opinion, an unlevel playing field. They were pretty vocal when it was going well, particularly in the Vase. The silence from Mansfield was deafening when the club resigned from the league.

The game is already five minutes old. Wollaton are unbeaten in the last five league games and look the stronger of the two sides in the first 15 minutes. Clifton are indebted to their keeper for two smart blocks, with a Wollo forward clean through.

Clifton’s marquee signing last season was leading scorer Michael Evans, who netted 27 times as the All Whites clinched the NSL championship. He wriggles his way through the home defence, but loses control of the ball, which falls fortuitously to Neil Thompson who has made a lung-bursting run from deep in his own half; he rolls the ball into an empty net. 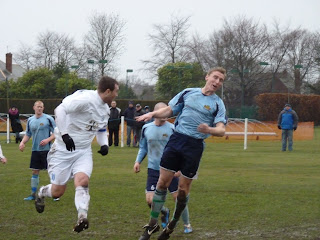 It’s blowing a gale and drizzling with rain, but there’s something romantic about this ground. It’s tree-lined down two sides. There are covers protecting the cricket pitch. All the hedges to the adjoining houses are neatly trimmed and the gardens expertly pruned.

Wollaton’s confidence is dented. Evans scores a scruffy goal when the home side fail to clear their lines.

Referee Andy Rolph is an entertaining fellow. He contributes to an entertaining game by letting the football flow. The standard of refereeing in this league is generally high. 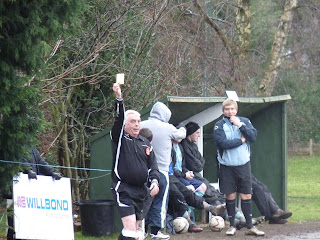 Karl Mitchell picks the ball up on the right, as once again the Wollaton defence are at sixes and sevens. He drills a ball across the face of goal for Evans to expertly guide a shot into the back of the net.

I’ve been stood behind the goal that Clifton have attacked with the Wollaton right back’s Dad. He has an unsurpassable knowledge of the NSL scene.

The Clifton management puff their chests out. It’s been a pleasing opening half for the visitors, but the scoreline flatters them slightly. 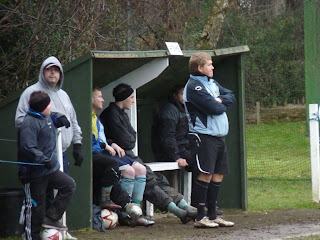 I take a stroll to the cosiest clubhouse on the circuit. A group of lads are playing darts and swigging Budweiser lager out of bottles. People peer up at the latest scores on ‘Soccer Saturday.’ Marcus Tudgay has scored ‘early doors’ for the Tricky Trees.

A friendly, smiling lady pours a cup of tea out of the pot. The brew can only be bettered this season by Keyworth United FC. It’s marked with an 8.5.

Any hopes of a reversal of fortune for Ian Lowe’s team quickly vanish. They hit the top of the upright from a corner. Clifton counterattack in numbers; they produce the move of the match with four swift passes, another cross comes in from the right, and is bravely blocked on the line by the ‘keeper. 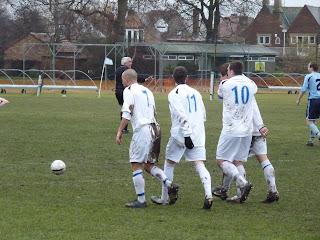 Scott Huckerby (brother of Darren) comes off the bench. The game is wrapped up by Clifton with another clinical finish from Evans following a left wing cross from Huckerby. Once again Clifton have numbers forward and have broke at a blistering pace.

Evans may take all the plaudits but Sticky Palms can’t take his eye off Clifton centre half Jake Richardson. His defending has been first rate, his heading world class.

I see a disconsolate Ian Lowe trudging towards the dressing room. He has kept his calm and cajoled his players, but if I was him I wouldn’t bother buying a National Lottery ticket tonight, particularly the ‘Lucky Dip.’

Man of the Match: Jake Richardson (5 Jacket)
Posted by Sticky at 5:42 PM

HAPPY BIRTHDAY FOR SATURDAY! Still no Murphy then?

Cooky is a legend in the NSL. Let 8 in at Basford 2 years ago, and he missed about 5 one on ones, just couldn't score !

Who's this Sally Gunnell bird? She seems....'enthusiastic'?