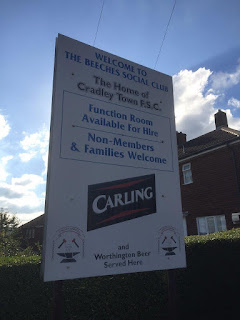 We're both traipsing out of Lancaster City's wonderful Giant Axe Stadium with heads bowed and shaking with rage. The afternoon and wonderful experience has been marred and tarnished by a blatant racist remark by some neanderthal on the terrace.'The bloke behind me' has shouted to a young black player, who is dragging his heels after being substituted, "hurry up, you've got a boat to catch."

Three pints of real ale at the Borough, in Lancaster city centre, with its leather sofas, chandeliers and antique tables, fail to lift my spirits. It's the night's talking point. I fire a tweet off to the Club asking for email contact details. They say they'll look into it. The player's Dad tweets me - he is distraught. I'm hoping Lancaster City act fast, so I don't have to take it further with the Lancashire FA.

It's Sunday afternoon and I'm slumped in a chair in the back room of the King Billy, which is nestled in between high-rise flats in inner city Sneinton. I sink two pints of Snake Eyes from the Black Iris Brewery, situated in Shipstone Street, Nottingham. 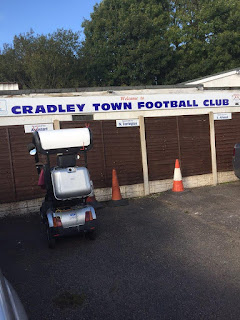 A visitor invades my Twitter timeline. The clown is from the 'Groundhopping Gestapo' - to be honest he's reminiscent of Corporal Jones from Dad's Army - I block the blithering idiot after clocking a tweet he sent to his flock, flaming me.

The Taxman is a late withdrawal from the East Midlands Counties League fixture between West Bridgford and Dunkirk. White Van Man rocks up, before kick off, on a chilly evening, sporting a pair of shorts - I'm wearing a thermal vest. We're treated to a 4-4 thriller, with the game being played at a furious pace but in a wonderful spirit.

I catch a good football question thrown out there by Perry Groves on talkSPORT. Who is the first player from the USA to score 50 goals in the Premiership ? 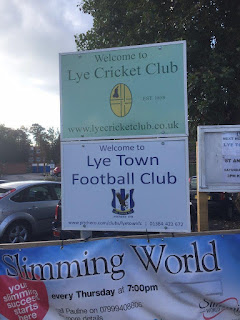 I pop into Keyworth Cricket Club's HQ at Platt Lane on Friday evening for the Junior Presentation Evening. It's great to bump into folk who I've not seen in a while. I help out a bit with the Under 10s and Kwik Cricket teams - to be honest it's banter and encouragement, I can't coach for toffee. I did spend over 20 years playing for this great Club - and have taken away so many memories, with long-winded stories to tell.

I'm sulking on Saturday morning after taking a good gubbing at Pointless from Ms Moon last night. I'm down the tip for 8:00am on the dot, where a very friendly chap helps me unload the rubbish from the 'Rolls Royce.' I drop into Morrisons to pick up some bits and bobs for supper - Brian Matthew is playing 96 Tears by American psychedelic rock band the Mysterians - it's head and shoulders above The Stranglers cover version. 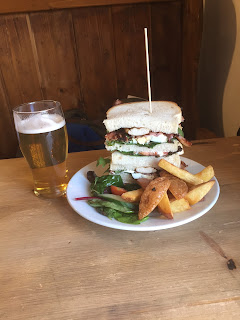 Ms Moon has shot over to Colwick to pick up her Mum. Auntie Val is off to Cornwall on her holibobs with her son and daughters. The meeting point is the Windsor Castle in Lye, near to Stourbridge. Poor old Sticky is relegated to the back seat of the on-loan Merc, as the 'Queen' waves on the throne with her walking stick in the front seat. Graham Norton plays the excellent Tom O'Dell's (born in Chichester, Sussex) new single - 'Here I Am.'

We stick the car in Lye Town's ground - it's a corker if you haven't been. No disrespect is intended to the local residents, but you wouldn't expect to unearth a jewel in the crown like the Windsor Castle around here. 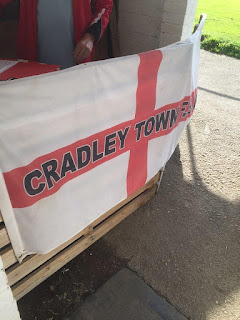 We've booked a table for five. Sticky is already necking a pint of 'Mellow Yellow' when the rest of the 'Moon clan' tip up. Ten real ales are on show from the Sadlers Brewery. We're shoe-horned into a snug corner table. I shout up a 'Double Decker Windsor Club' sandwich that even Scooby Doo would struggle to polish off. We wave off Auntie Val and Ms Moon's sisters.

Cradley Town's ground on Beeches View Avenue is only a couple of miles away. Cradley is a village in the Black Country and Metropolitan Borough of Dudley, with a population of just under 13,000. It was once the centre for iron-making, with nearby Cradley Heath once producing the anchor chain for the ocean liner, RMS Titanic. 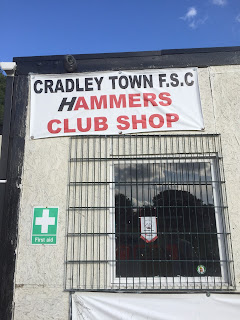 Former D***y County footballer, Steve Bloomer, was born in Cradley. He was named in the Football League Top 100 Legends, after scoring 317 goals in 536 appearances in the old Division One (now Premier League) - second only to Jimmy Greaves. There is a bust erected of him at the i-Pro Stadium. He also scored in his first 10 appearances for England - a record held to this day.

Cradley Town FC were founded in 1948 and are nicknamed the Hammers. Players to have made it into the Football League include: 'the 'Flying Postman' John Williams ( remember him beating Notts County's Kevin Bartlett in a sprint-off at Wembley at the 1992 League Cup Final to win £10,000). Larger than life goalkeeper Alan Nicholls played for Cradley having been released by Wolves. He made 65 appearances for Plymouth Argyle before tragically losing his life in a motorcycle accident at the age of 22 years old. 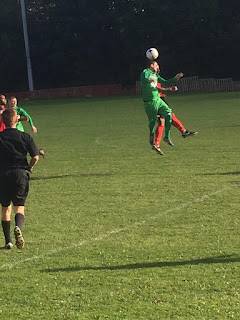 I fish out of my pocket the tried and trusted ten year old dictaphone. The 'Hold' button has fallen off. It's a gonna. I have to Google how to use the Voice Memo on my i-Phone - that's how thick I am, folks.

The ground is situated in the middle of a housing estate. Ms Moon shoots off to fill up with diesel, as I trek up the gravelled path towards the ground. The incline is steep, when I finally reach the summit I'm very kindly pointed towards the turnstile by a friendly secretary. 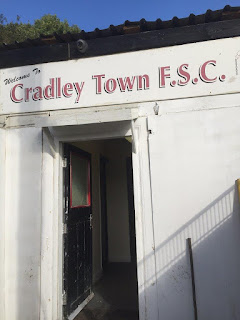 Gasping for air, I pay £5 on the gate and another quid for a really good programme. I love the article about the first 'Footballing Playboy' - Leigh Richmond Rouse, who was killed in the Battle of the Somme in 1916 - check him out, a great story.

Blimey Charlie, the ground is a belter, probably the best of the season with its Club Shop, Snack Bar, and the red and black painted corrugated iron stands. The views out to the Worcestershire hills are breathtaking.

The sun's out and so are the teams. Ms Moon is fuelled up. We stand opposite the dugouts on this three-sided ground. Cradley are full of confidence after two wins on the bounce, they play like a team, encouraging one another. They score an early goal and increase their lead with a smart finish from their best player the No.10 jacket. 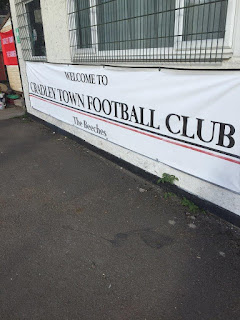 A lady makes her way around the ground selling raffle tickets. I'm in a good place having seen a few goals and touched the match-ball. We splash out on two strips - bearing in mind I've had two wins in ten years, I pray to God it's not a bottle of Pinot Grigio or Lambrusco.  I enquire what the prize is, and I'm delighted to hear it's a box of Family Circle.

It's 2-0 at the break, but all I can think about is that box of Family Circle - I'm having a sugar rush despite the 'Scooby Snack.' Ms Moon has wandered off up to the Tea Bar to grab a couple of hot drinks. I've clocked a bloke wandering around the ground with a pint glass full of raffle tickets. I've a feeling it's going to be our day. I ask for the numbers, my ticket is a strip out - it's a formality, Ms Moon has the winning ticket. 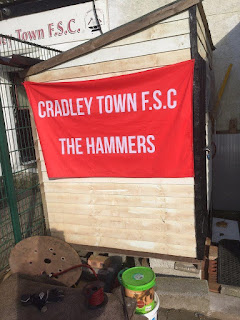 I phone the good lady up who is queuing at the counter. There's no reply, she's teasing me. Ms Moon arrives back with two piping hot drinks, minus the tin of biscuits. It's been won by some lucky bugger, who bought the strip before us and who is now parading the biccies to all and sundry. Bloody hell, I can't even dunk one into my tea.

Cradley bag another as the game peters out. The officials have done well despite the 23 year old ref getting earache off a whinging Dudley Sports manager as the teams walk off at the break. The father and son (only 16 years old) assistant refs have done well too.

Man of the Match: Scooby Snack

Great piece. I worked at the Careers Centre in Cradley Heath in the 80s, and lived in Brierley Hill, up the Road. We used to go to the legendary Mr Dave's Balti House in Lye (bring your own beer) and it was so good, locals would queue at the door for a table from Thursday to Saturday. I now live in Pontypridd, where the local Brown Lennox chainmaking works, now long gone, designed the anchor chains for the Titanic, that were then made in Cradley. A great place. I miss it still, hot pork sandwiches, bostin' beer, and a most excellent accent. My wife, sadly was less keen on the accent, and was relieved when I got a job in south wales...

Hey Frank, I did clock that the anchor chains were made for the Titanic, forgot to mention it in the blog. There are some hidden gems in the Birmingham/Wolverhampton area. I love Lye Town, Cradley Town and Wolverhampton Casuals. Got plenty more lined-up around here over the next few weeks, as Winter sets in. Only an hour away in the car. Thanks for reading the blogs, really appreciated. Good Health ...... Sticky

We are glad you and Ms Moon enjoyed your visit! Great comments from Frank Fish too. Good luck to you all. Regards David Attwood Cradley Town Secretary
PS We've put the blog on our social media. Hope that's ok.

Hi David,
We loved our day out at Cradley. Please feel free to use the blog wherever. Good luck for the rest of the season.