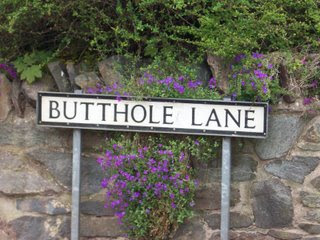 We crossed the border to watch Sticky junior and his crazy quick feet on Sunday morning. His team were at Long Eaton United’s Grange Park and even graced the first team pitch. Sadly it was only fit for growing spuds and the wings were one of the few areas of the pitch that sported grass. I’d lost count of the number of goals we had conceded by the hour mark; we were appalling. And furthermore those cheeky sheep shaggers charged us a £1 each for a cup of tea. It only got a five out of ten. I couldn’t get out of D***yshire quick enough. 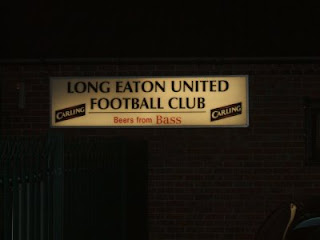 I had hoped to pop into Greenwood Meadows’ Lenton Lane ground on the way back to watch Scots Grey play the holders Hetton Lyons CC in The FA Carlsberg National Sunday Trophy, but we were late back, and so I missed out on another cup upset. I might catch them in the next round.

White Van Man had asked if I fancied my first visit of the season to watch Shepshed at The Dovecote; we’ve watched them away often enough. I think WVM has become a little bit insecure with the emergence of BLOG superstar Trumpy Bolton. Trumpy has certainly sparked a lot of interest on the World Wide Web. People have left comments on the message board asking when he will be back; I’ve had e-mails enquiring about him and even had people stroll up to me at games asking of his whereabouts. Poor old WVM is used to being the star of the show, and I reckon he feels a bit threatened by our new groundhopping companion. If you’re reading this WVM, you’ll always be my number one son. 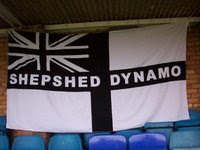 WVM is shouting and yawping outside my house at 7pm. He’s phoned me three times to tell me he’s outside waiting, but my phone is on silent. I don’t recognize the car. ‘We’re travelling in style tonight groundhopper’ he says. The car’s a Ford Focus with an all-leather interior. I’m introduced to WVM’s mate ‘Bruiser.’ I decide not to enquire how came to acquire his nickname.

‘Bruiser’ has some trance music on the CD player; it certainly beats WVM’s favourite radio station: Heart FM. They’re both talking excitingly about the impending FA Cup clash between ‘The Sheep’ and the ‘Tricky Trees.’

We drive through Bunny and Hathern and hit the town of Shepshed inside 20 minutes. We drive down another main drag littered with ‘To Let’ signs. 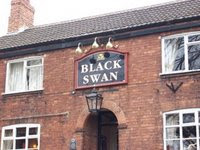 Shepshed is in north Leicestershire and has a population of around 15,000 people. It was once locally known as Sheepshead due to its familiarity with the wool industry. On 31st December 1915 a German Zeppelin was seen flying over the town.

I can’t find anyone particularly well known born in Shepshed but can report that the beer swilling, all-round entertainer and groundhopping legend Trumpy Bolton ‘works’ in the town. There will be no economic downturn in the pub industry of Shepshed whilst Trumpy is on tour in the town!

We turn up Butthole Lane and park in the Black Swan car park. It’s £6 entry and £1.50for a programme that never lets you down. I’m pounced on by a lady who twists my arm to buy a raffle ticket. Over two seasons of buying tickets and not a whiff of a prize yet. You’ll be the first to know readers, when I break my duck. 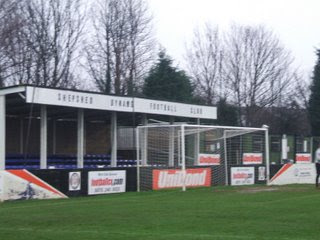 Lincoln United are tonight’s visitors; they’ve won their last three away league games. Lincoln is the birthplace of Sticky Palms The Groundhopper. This evening I will be in the away end.

The food bar is always worth a visit; strangely the shutters don’t go up until just before kick-off. The lady serving is friendly and very efficient. The tea is quality and comes streaming out an already brewed urn. It’s got to be an eight out of ten, and take note Long Eaton United, only 50 pence a cup.

Terry Fleming is playing right back for Lincoln tonight. He is a Sincil Bank legend. He was often captain during John Beck’s reign at ‘The Bank.’ He’s an excitable but wholehearted character. I look forward to his tussle with Dynamo wing wizard Rob Norris. 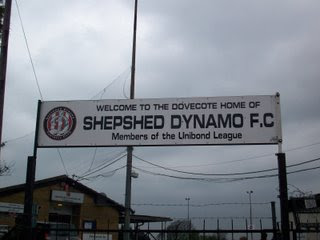 It’s a case of round holes and square pegs for Shepshed tonight. Ian Robinson has to play right back because Ricky Hanson is unavailable, Sam Saunders plays centre midfield and Norris plays in an unfamiliar role on the left flank.

WVM has picked this game and is under pressure for a goal as ‘we don’t do 0-0’s son.’ The first half is diabolical. The ball spends more time in the night time skies than the endless planes coming into land at nearby East Midlands Airport. Apart from a couple of Sam Saunders’ efforts Shepshed fail to trouble Lincoln ‘keeper Mario Ziccardi.

Shepshed are in a poor run of form. It’s not a happy camp. In recent weeks both the management team and a number of players have been sent off. They are squabbling and bickering out on the pitch. They are not together. Lincoln sense this and go close through the impressive Sean Cann. 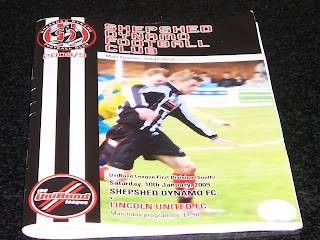 There’s a huge sigh of relief as the half time whistle is blown. WVM is talking to Ian Screaton’s brother, so I take a stroll around this charming ground. I bump into a few folk from Shepshed I know, who all ask if Trumpy arrived safely back from Goole.

The raffle numbers are shouted out over the tannoy but of course I’m nowhere near. ‘Bruiser’ doesn’t appear to be enjoying his debut and spends more time in the clubhouse keeping warm than watching the game.

Lincoln look the happier of the two sides and begin to play with a bit more self-assurance. Their young forward Sean Cann looks a promising player and misses a golden chance early in the second period, screwing his shot wide. 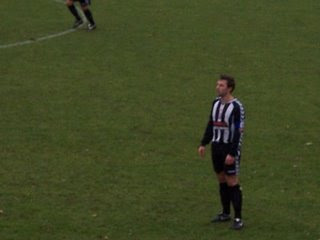 The visitors finally take the lead on 73 minutes when the referee awards a penalty after a Lincoln player is pole-axed in the box. Dave Frecklington brother of Lincoln City midfield genius Lee Frecklington, dispatches the spot kick with ease.

Lincoln’s second goal of the game on 84 minutes is gift wrapped. Ian Robinson makes a defensive blunder leaving Cann with the simplest of goals. The defence is AWOL for the third one, deep in stoppage time, as Cann rounds Gary Hateley and slides the ball into an empty net. He taunts the Shepshed faithful cupping his ear to hear the abuse.

I’m walking out the ground; a home supporter asks if Trumpy Bolton is available for Saturday. Things aren't quite that bad, but manager Lee Wilson must arrest this alarming slide before all the good work in the first half of the season goes to waste.

Rob Norris has easily been Dynamo’s best player tonight but has played in a position alien to him. He is their creator supreme and will hopefully be restored to the right flank for the visit of league leaders Carlton Town on Saturday.

Man of the Match: The lady behind the tea bar.
Posted by Sticky at 10:14 PM

He wasn't cupping his ear to hear the abuse, he was doing it to see if he could hear any Lincoln supporters or officials cheering. He failed...

Good to see you both again - next time bring the legendary Trumpy though.

Need to look slightly further north of Carlton, old fruit. The league leaders are at home this Saturday. Entertaining Rushall...