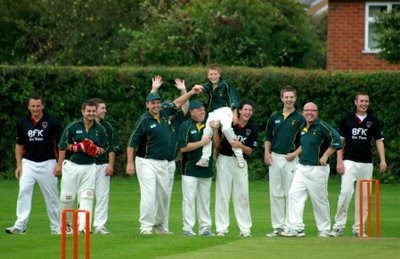 It’s 7am, the Tuesday after the Bank Holiday Monday, I’m lying in bed and it’s time to go to work. Every single bone in my body is aching. Yesterday I turned out for my local village cricket club’s annual Twentytwenty fixture. Sticky junior and I were on opposite sides, the little rat got me out. Pocket money has been stopped. I trudged a sorrowful, lonely walk of shame back to the pavilion. 300 spectators found it hilarious.

An hour or so later I felt a lot better when I took a steepler of a catch to dismiss my good friend Bobby. I took it in my stride and kept the celebrations to a minimum. Remember that goal Giggs scored against ‘The Arsenal’ a few seasons ago, when he waved his shirt around his head, well it was a little bit like that. 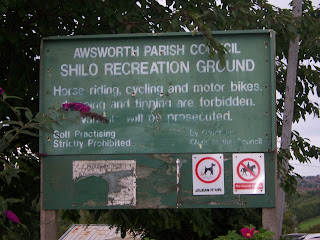 Awsworth Villa were formed in 1963 and have raised a few eyebrows in the last week, when they thumped the defending NSL champions Caribbean Cavaliers 4-1 at The Shilo. They‘ve not been shy about it on the greatest football message board in the world either. The Nottinghamshire Senior League message forum is a gold mine. Already we’ve had managers resigning, banned players playing when they shouldn’t be and even the placid Barthez upsetting a referee. Thankfully they’ve since kissed and made up. I often have a ten minute lurk on there at lunchtime, to catch up with all the gossip.

The Taxman picks me up at 5.45pm; White Van Man is watching Keyworth United and The Nuclear Scientist has just arrived back from vacation in France. We sail up the Nottingham ring road and arrive in Awsworth within half an hour. A guy pushing a pram directs us to the ground. 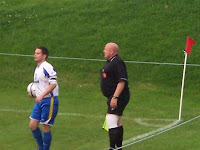 Awsworth is a village in Nottinghamshire with a population of 2500. It lies between the towns of Kimberley and Ilkeston. We are back in the old coal mining territory. It’s my favourite part of Nottinghamshire and I can see why it influenced David Herbert Lawrence to write so beautifully.

Attenborough is a village in the south west of Nottinghamshire. I aim to visit their ground before the start of the monsoon season. They have a former pro in their ranks: Steve Scoffham has found his way into the NSL after short stops at Notts County, Burton Albion and Alfreton Town. Freak injuries cost him the chance of another contract at Meadow Lane. He certainly roughed up the Lincoln City defence a couple of years ago when I was down there. 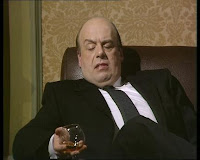 The Shilo ground is built into hill and has a steep grass bank enabling the supporter the luxury of an elevated view. In the distance is the town of Ilkeston and the Swedish superstore IKEA. The Taxman is in dispute with IKEA following a customer services blunder. He is master in the art of writing letters of complaint. I wish I’d known beforehand, because I could have slipped an Abba CD into his car for a wind-up.

The start of the match is delayed due to the home team forgetting to put out the corner flags.

‘Boro are straight on it. They make a mockery of theirs and Villa’s league position. They play with style and a game plan. Villa in comparison prefer to hit their pacey front man Kieron Saxton early. 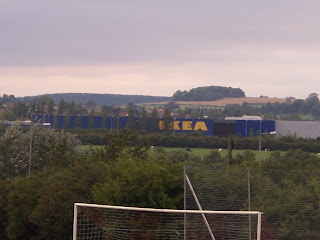 Attenborough waste numerous chances before finally taking the lead through Birtles, who blasts the ball home from close range off the underside of the bar. Attenborough are stronger in every department, it takes Awsworth an age before they win their first header. How did they beat Cavs’ so convincingly? Attenborough spurn chance after chance before Leith fires home to make it 2-0. Villa’s only serious threat, Saxton, has the ball whipped off his toes by ‘Boro ‘keeper Ivanov, following a mazy run.

The linesman on our side is a portly chap, he has a heavily bandaged knee, and looks like former Coronation Street butcher Fred Elliott. But he keeps up with play superbly and all his offside calls are correct.

There’s more dogs here than Battersea Dogs’ Home. I can only assume we’re close to a footpath as there is a procession of canine creatures throughout the first period. Amongst the 40 strong crowd are two Greyhounds, a Staffordshire bull terrier, an Alsatian, a Labrador cross, a Jack Russell and a Heinz 57. 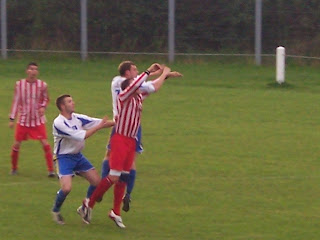 I’m chatting with a groundhopper from Swadlincote, we both remark how we are mightily impressed with the visiting team.

Awsworth manager Kevin Buxton must have tore a strip off his team at the break as they look rejuvenated and fresh in the second half. They are back on level terms on the hour. Firstly defender Baker bravely heads home a corner despite a valiant attempt by ‘Boro to prevent the ball from crossing the line.

Saxton has his tail up now and it’s not long before he twists and turns the Attenborough defence inside out, and finishes with a fine left foot strike.

The Taxman has turned down the offer of a cup of char. I stroll into the tea bar and I’m served a cracking cup of tea by a very friendly lady. There is a memorial plaque on the wall, pictures of the youth teams and plenty of trophies. I remember when I scouted for ‘County’ a few years ago that Villa had a terrific U11s side; they’re probably U14s now. 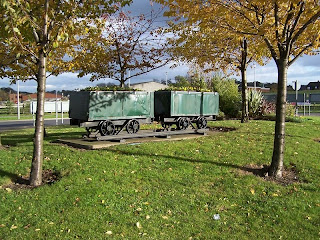 Attenborough are beginning to rue all those missed chances. Their forward Steve Oldham has been a thorn in the home side’s defence. He’d unluckily hit the upright at 2-0, but scores a beauty to make it 3-2, leaving his marker for dead.

The referee awards a late advantage free-kick to the Villa; Awsworth’s number 11 sportingly kicks the ball back to the ‘Boro ‘keeper. You wouldn’t see that at Old Trafford.

I’m walking back to the clubhouse to return my tea cup when a Villa player nods a corner ball wide. I catch the ball and return it to the ‘keeper. That’s two catches in two days.

They are having a ‘Moaner of the Season’ poll on the NSL forum at the moment, Awsworth Villa have a player who would win an Olympic gold medal in the sport of moaning. He has spent the entire second half snapping, snarling and sneering at the excellent linesman Fred Elliott. His grand finale is to sarcastically clap the official having once again been correctly called offside. RESPECT?

Dave Barrie scores the equalizer. The Attenborough ‘keeper, who has been solid all night, comes charging out to meet a free-kick, he gets nowhere near it, and the ball skims off the back of Barrie’s head and into an empty net.

Awsworth have Attenborough on the ropes, but for once the visitors hold firm.

It’s been a pulsating game of football, a terrific advert for the NSL. The referee has been superb, and that’s not the first time I’ve said that about a ref in the NSL.

Man of the Match: Steve Oldham
Posted by Sticky at 6:52 AM