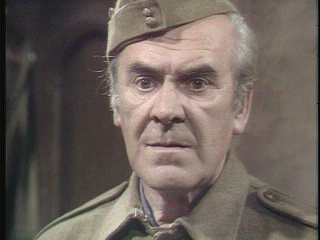 It’s Thursday 22nd October. There have been protests all day. The Metropolitan Police have put the boot in on demonstrators outside BBC studios in west London. The whole country is talking about it. Listeners clog the phone lines on radio phone-ins to complain about it. The programme is on TV tonight.

The kids are frightened and are threatening to hide behind the settee. This person is not fit and proper to represent the corporation. It’s vile and disgusting that this should be shown on prime time TV. I’m not talking about BNP leader Nick Griffin’s appearance on Question Time but the decision the BBC have took to allow shots of that fat, ugly lass off EastEnders - Heather - giving birth on national TV. I think I’ll eat my tea later. 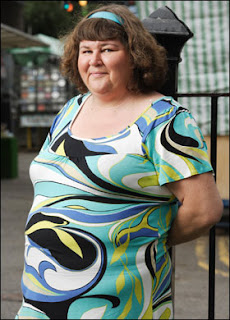 There were no real plans to take a midweek game in but I had spotted Quorn and Radcliffe Borough were due to replay their FA Trophy tie on Tuesday evening.

Mrs P was curled up on the sofa, waiting with anticipation for another thrilling episode of Holby City. No doubt somebody will be rushed into accident and emergency with a ruptured spleen and two legs hanging off but somehow still survive. And yet a perfectly fit, young chap will come in with a nettle sting and end up on the hospital mortuary slab due to a complicated allergic reaction.

Former Leicester City and Aston Villa striker Julian Joachim was playing for Quorn. His team bagged six, coming back from 3-1 deficit at the break. There was no goal bonus for the ex England under 21 international. 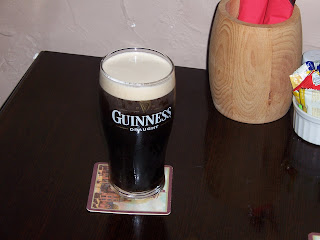 It’s been a relatively quiet week. One comedy moment to report is that Sticky junior, who couldn’t punch his way out of a paper bag, had a minor scuffle with his best mate on the front garden. There were a few haymakers and a spot of windmilling. Mrs P finally stepped into the ring and ended the bout.

It’s Saturday morning. The clocks go back one hour tonight – it’s not particularly good news for us insomniacs. I rustle up a couple of poached eggs.

The day gets off to a bad start when I turn the radio on and find that Mrs P has left it on Trent FM. Sticky junior won tickets for Cineworld on a phone-in last night. He was getting a dressing down from Mrs P when the DJ phoned back to tell him he’d won the prize. 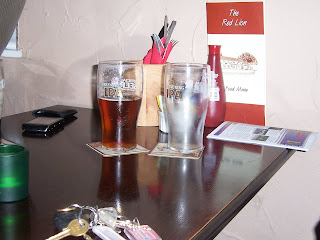 I set the dial to Radio 2 and listen to Brian Matthews Sound of the Sixties show. He plays a classic track by USA soul singer Madeline Bell called Help Yourself. It doesn’t half cheer me up.

Mrs P has gone to the hairdressers. There’s just time to hoover out the Rolls Royce before picking up The Architect. Minutes later we roll up at blog legend Trumpy Bolton’s house. He comes waltzing down the drive with a Leicester Mercury carrier bag full of beverages.He hands me a programme from the New Mills game that I’d thought I’d lost. It’s covered in beer stains.

Next stop is the picturesque village of Willoughby on-the-Wolds, where we pick up Chopper Harris, who today makes his groundhopping debut. 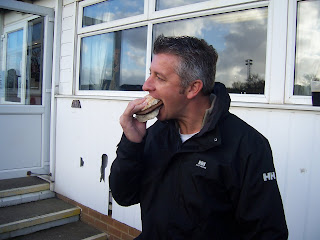 There’s a bit of a conflab about the best route to take. We all agree that the M69 and A46 sounds good. It’s a 150 mile round trip.

Trumpy is already slavering over the thought of slurping his one litre of Tawny Owl cider that he purchased a gallon of on a recent beer break in Betws y Coed, in Snowdonia, north Wales. Next weekend he’s lined up a short break in Norwich, which coincides with the city’s annual beer festival.

Trumpy earwigs that Chopper Harris was once in the British Army and did a tour of duty in Denmark and Germany. Trumpy politely asks him if he visited the Carlsberg and Heineken breweries. 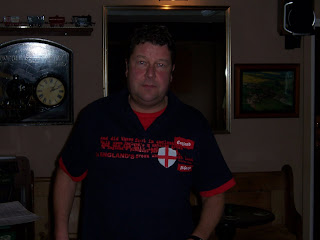 We hit a tailback of traffic that’s coming from the direction of the M40. We divert around Warwick and are soon sat inside the Red Lion at Northend. They’ve only got two real ales on. I’m not particularly fond of either. I dither over my choice and finally plump for a Greene King IPA.

Trumpy shouts me up a 5oz gammon, egg and chips. Everybody else tucks into a homemade suet pudding. It’s not much of a pub, but at least Trumpy can put his highlight pen through the village on his crumpled, dog eared atlas. New readers need to understand that Trumpy’s will to live depends on him making a financial transaction in every village and town in Great Britain. 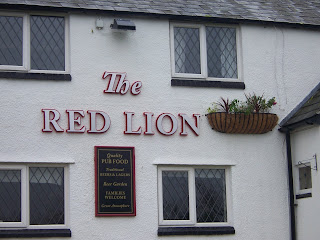 Chopper is chattering away to The Architect about how many eggs his hens lay in a year. It’s like having dinner with Tom, Barbara, Jerry and Margo off the BBC comedy series The Good Life.

The ground is tucked away behind the railway station in a dingy, scruffy part of town. Banbury is a market town in north Oxfordshire and lies on the River Cherwell. It has a population of just under 45,000 people. It is the home of the biggest coffee-processing facility (Kraft Foods) which was established in 1964. Trumpy says that coffee ruins a good hangover. 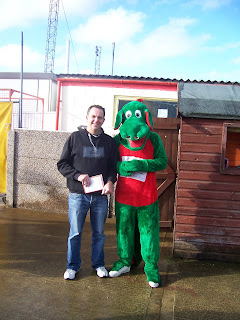 The town is well known for the Banbury cake, which is similar to the Eccles cake but is oval-shaped. It’s most famous landmark – the Banbury Cross – celebrates its 150th anniversary tomorrow (Sunday).

Glam rock star Gary Glitter was born in Banbury. Not much has been heard of him since he took his computer in for repair at his local PC World.

Former Northern Ireland international and Chelsea striker Kevin Wilson was born in the town and began his career with The Puritans. 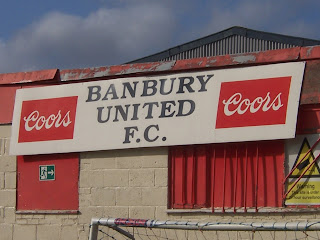 Bedford is 50 miles east of Banbury. They have a long list of cult celebrity born in the town, including: Countdown’s Carol Vorderman, comedian and actor Ronnie Barker and Pike’s uncle off Dad’s Army, John Le- Mesurier (Sgt Wilson).

It’s £8 on the gate. The Architect hands me a programme that costs £1.80. Fair play to programme editor David Shadbolt, he has produced a cracking effort. I have to say that I’m disappointed in the ground though. The John Nicholls Stand is impressive. The rest of the ground is due redevelopment.Plans are pinned up in the clubhouse. 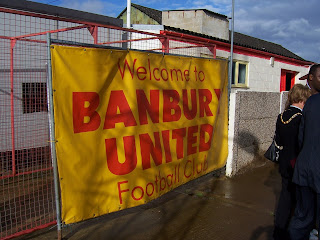 Trumpy takes advantage of the spacious clubhouse and soon has the bar tills ringing. He’s as happy as Larry.

Sticky’s concerned about the lack of goal-scoring prowess of both teams. Banbury and Bedford have struggled in front of goal. The Groundhopper doesn’t do 0-0s.

There’s a presentation before the game of a set of football kit to Banbury United (Sierra Leone). It’s a country that has been devastated by civil war. Football enables the kids to keep off the street. 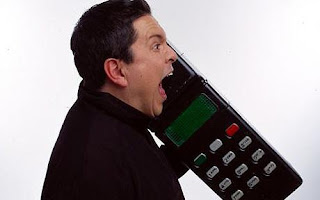 Chopper spends the entire 90 minutes of the game playing with his beloved Blackberry. He loves this gadget more than anything in the world. He caresses and holds it like a loved one. Trumpy is intrigued, but also miffed, that he doesn’t have internet access on his bespoke East German model, that looks like Dom Joly’s mobile off Channel 4s cult TV series Trigger Happy TV.

The game lacks the quality of its northern counterpart. Ironically, lowly Bedford, despite kicking into the wind, look the more dangerous outfit. They go close through Draycott and Cole. 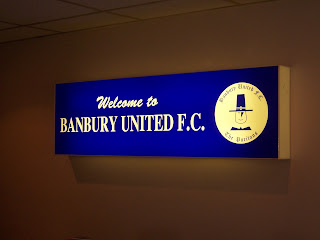 The Puritans have the game’s outstanding player in 18 year old Oxford United loanee Declan Benjamin. He reminds Trumpy of Carlton Palmer, with his gangling stature and strong running. He strikes a couple of efforts wide of the mark from distance. Banbury begin to find their stride and finish the half on top.

Trumpy manages to squeeze a couple in at the break. We are treated to page 339 on Ceefax. The Pies are 1-0 up, whilst once again Lincoln City have failed to trouble the scorers. We have a manager who once refused to play for England. I won’t go while he’s there. 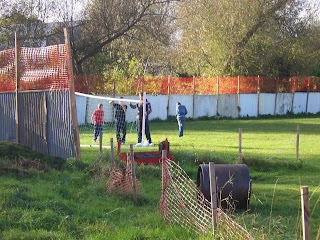 Banbury exert pressure on the Bedford goal in the second period as the visitors are pinned back in their own half. They won’t come out and play and seem content with a point. Veteran striker Howard Forinton, who once fetched £250,000, hits the bar, with the rebound somehow headed over.

The Puritans are short on quality. Their right winger lacks that yard of pace to shake off his full back. The left winger sends in sand wedge crosses all day. 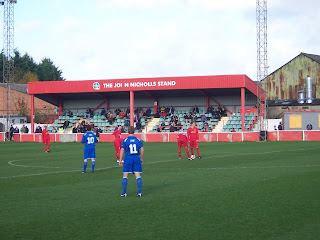 There are late calls for a penalty but to be honest the game doesn’t deserve a goal. I’ve got a 75 mile journey to look forward to, accompanied by the sound of a man guzzling a litre bottle of Welsh cider, talking complete and utter twaddle.

Attendance: 348
Man of the Match: Declan Benjamin.
Posted by Sticky at 8:52 PM

Should have been at the Lane, 6 goal thriller !
Fastest player I have ever seen upfront for Wollo, Adrian Bascombe I think his name is, ex Dunkirk I believe !

Monday 11pm no report !
It's like waiting for my Ergo power supply quote.

Highlight of the day was the egg burger at tattoo mans greasy pitch side café, proper northern food south of the gap. Top draw.

Way cool! Some extremely valid points! I appreciate you
writing this write-up and also the rest of the website
is really good.