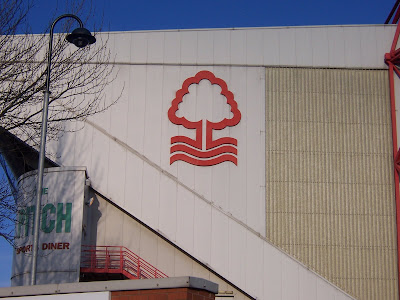 I was 45 years old last Thursday. Mrs P and I had planned to have lunch in town and then pop down PC World and buy a cheap laptop, but unfortunately the heavy snow put paid to all that.

Despite creeping closer to the ripe old age of 50, some D***y County supporters have told me to grow up on their fans’ forum after I posted the BLOG on their board from the FA Cup tie the other night. They also called me a tit and advised me to continue writing the newsletter for the local Caravan Club. God knows what would have happened had they lost the game. 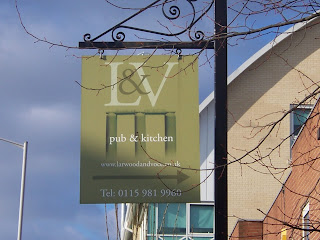 It’s Saturday morning and I’m looking forward to watching QPR grace The City Ground this afternoon. I saw them play on New Year’s Day a few seasons back at Notts County’s Meadow Lane. The game was a thrilling 3-3 draw. I remember Pies’ winger Simon Baldry running rings round Argentinean full back Gino Padula.

One of the first fanzines I used to read was called A Kick Up The R’s; it used to be one of the best. I even subscribed to it for a while. I remember some guy called Dave Thomas used to write a lot of thought-provoking articles. I wonder if it’s still going?

I went to Loftus Road about 20 years ago. Forest won 2-1. Unfortunately, I forgot to put the oil cap back on properly on my Vauxhall Cavalier SRI. She overheated at Rickmansworth Railway Station. It was an expensive day out. Happy days though. 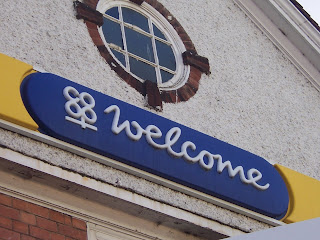 ‘The Skipper’s’ football team are all meeting up outside the ‘world renowned’ (dog hole) the Trent Bridge Inn. I drive down to ‘The Ribbon Maker’s.’ We jump in his 4x4and park close to Nottinghamshire County Cricket Club on Bridgford Rd.

We pop into The Groundhopper’s favourite shop, the Co-op, to buy some drinks and sweets for the kids, as I hate being ripped off at the ground.

We leave ‘The Skipper’ with his pals, as I’ve a ticket for a different area of the ground. I collect my ticket and take a steady stroll. I walk past a guy selling t-shirts, badges and scarves. The waft of fried onions hangs in the cold air. The banks of the River Trent are covered in snow. I walk past the Boat Club and Britannia Club. I saw some great bands play there in the early eighties. 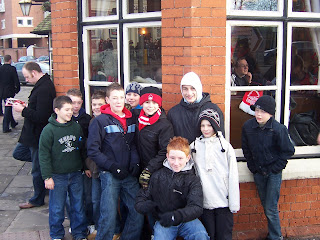 It’s Kids For A Quid and the place is rammed. I’m in the Upper Brian Clough again, close to the away fans.

The teams are warming up and I’m looking for someone in particular. He’s got long straggly hair. When he played for my team, Lincoln City, he always wore his shirt out of his shorts and his socks rolled down to his ankles. He cost us £25,000 from Preston North End. He is the best winger ever to have played at Sincil Bank. From the wing he scored 37 goals in 83 appearances. Lincoln fans used to call him ‘Wild Thing.’ I wrote to Forest over 10 years ago tipping them off about him. He signed for Port Vale for £500,000 and later signed for Wimbledon for £2,000,000. The Forest fans would have loved him. His name is Gareth Ainsworth. Father time has caught up with him. He’s now a player coach for QPR. He does a few drills with the players. 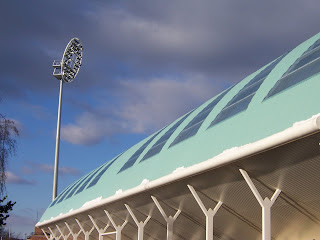 Queen’s Park Rangers hail from the Shepherd’s Bush area of west London. It’s steeped in musical history. Members of The Who, Sex Pistols and The Clash were born in the vicinity. Former England rugby union captain Lawrence Dallaglio was born and raised in Shepherds Bush. Babyshambles singer Pete Doherty was once a programme seller for the club.

Footballers to have played for both Forest and QPR include: Nigel Quashie, Stanley Bowles, Trevor Francis and Steve Hodge. ‘If only he could pass a betting shop like he can a football’ is what they used to say about Bowles. 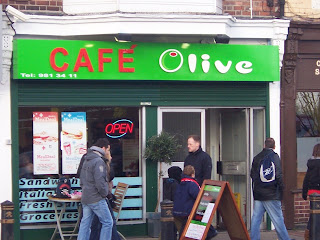 QPR were up at Roker Park shortly after Sunderland won the FA Cup in 1973. They did a lap of honour with the cup and left it on display on a table near the stand. Bowles bet his mate Don Givens that he could knock the cup off the table with the ball during the course of the game. He was true to his word and dented the cup to boot.

Rangers arrive at The City Ground on the back of an eight match unbeaten run. They are managed by former Benfica, Juventus and Inter Milan forward, Paulo Sousa. He was previously ‘Big Phil Scolari’s’ assistant for the Portuguese national team. He has spent wisely and has assembled a fresh, fast, young and skilful squad. A mouthwatering amount of money must go on wages. 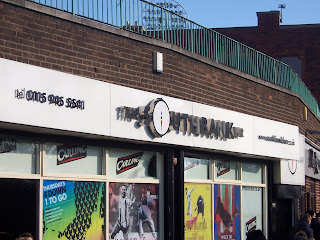 Lee Cook, Patrick Aygemang, and Martin Rowlands are all missing today. On loan Sunderland midfielder Liam Miller is in the starting eleven. According to Roy Keane he struggles with his timekeeping.

I’m getting a bit fed up with the HMV Superstore top dog for music tunes that the DJ insists on playing. The Kooks ‘Ooh La’ is about as good as it gets. It’s my third Forest game in ten days. I’m off to St Andrews next week, and then that’s me over and out. I’ll be back to trawling the non-league scene. I do like Forest but easily get bored watching the same team week in and week out.

A friend, who I used to coach with, comes and sits next to me. We catch up on the gossip. His son plays for The Academy and is sitting in the shallow lower tier. A large group of boys pass us on the concourse. They are from Crumlin United in Northern Ireland. 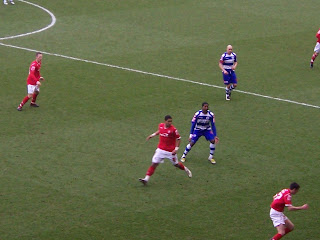 Both sets of fans are in good voice; 2000 have travelled up north. QPR ‘keeper Lee Camp receives a rousing reception from the Forest faithful. What must poor old Paul Smith be thinking?

It’s not long before Rangers are asking questions of the home defence. Young Irishman Brendan Moloney blocks a stinging volley from 20 year old on loan striker Samuel Di Carmine. The balls falls to Alberti whose attempt is cleared off the line by Joe Heath.

At the other end the Rangers’ defence are not shy of a bit of rough and tumble. They leave their calling card on the Forest attack as Tyson departs with a head injury that requires 12 stitches. He shows displeasure to the referee. Forest firebrand Joe Garner complains incessantly about flying elbows and late challenges. I can’t comment, I’m at the other end. 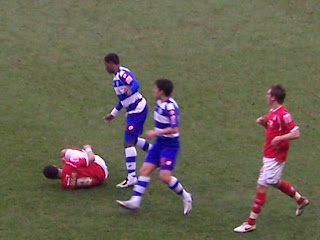 QPR look the more likely team to score. They hit the upright, with Paul Smith waving at the ball as if it’s going wide.

The game is desperate for a goal, but is ambling towards 0-0 at the break. But it’s Forest who take the lead against the run of play. McGugan picks out a rampaging Luke Chambers on the right wing, with a diagonal ball; he’s pulled back by Brescia- born midfielder Matteo Alberti. He escapes with a yellow card. McGugan smashes the resulting penalty into the roof of the net.

Alberti makes amends moments later with the final kick of the half, stabbing home a Connolly cross after a good spell of possession.

I move seats at the break. ‘The Ribbon Maker’ has found one near him. Sticky junior sits just down the row. I hear his pitter patter of chatter throughout the second half. 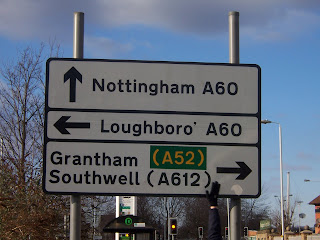 Rangers are energised by the equaliser and begin the second period well. Wayne Routledge is their big cheese. He’s tormenting Joe Heath. His first touch is deft and his pace quite frightening. His game always has an end product. He creates Alberti’s second goal of the afternoon. Routledge fails to put the game to bed though, spurning a golden opportunity, by firing wide after ghosting in from the flank. He looks a steal at £600,000.

On 67 minutes Wes Morgan picks up a loose ball in midfield and threads it through to Chambers, who hits a high looping cross to the far post where Cohen out jumps the QPR defence to nod home. 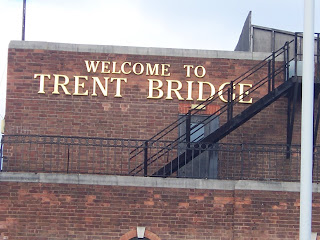 Rangers are less penetrating following the loss of the excellent Di Carmine. His replacement Dexter Blackstock is less effective, and struggles to get to grips with the pace of the game. Paul Smith saves well from a Leigertwood pile driver.

A special mention goes to referee Darren Deadman, who does his best to spoil the game. Some of his decisions baffle both sets of fans. Morgan and Moloney are booked for innocuous challenges.

Forest dig in for the final quarter. Wilson and Morgan are commanding in the air. The draw is a fair result although it is QPR who have crafted and created the better chances.

Star Players: Cohen and Routledge.
Posted by Sticky at 11:09 AM

Sticky, Something you may find of interest. Lol

Trevor Francis who you mention played for both clubs was famously the first British million pound player when Nottingham Forest paid Birmingham City (next weeks opponents) for his services back in 1979. Notts County also broke the British transfer fee record when they shelled out £20,000 in 1947 to Chelsea, for the services of Tommy Lawton. A figure I believe that stills holds as Notts Countys club record fee. Now where is that eloquently spoken Notts County fella?

in the globe every notts home game,i stand next to the fruit machine ,come and say hello when we play bradford..........

Mr Notts County how would I recognise you? My mental image has you adorned in a mauve crushed velveteen overcoat atop a cerise chiffon blouson, paisley crevat centrally placed around ones neck, hat floppy and cocked, long woollen pantaloons and a pair of brown leather brogues. Quintessentially iconic of a certain naked civil servant, I shall call you 'Toddy'.....

.....And you shall recognise me by the long flowing hooded robe, and the scythe tossed over one shoulder. See you soon!

Kid's for a quid ? Does Paul Gadd know ?

claimed nearly everybody pay off their own loans before its due and lacking charges
A respected consumer debt charitable organisation should expect the number of folks investing in these for the purpose of guidance in excess of pay day loan credit card bills so that you can two bottle this. debts good cause suggests available used a quickly, superior attraction funds this season. This charitable organization reveals several years past the amount of prospects with them appeared to be unimportant.
pożyczka na dowód
http://kredyty-bez-bik.org.pl
kredyt od ręki bez bik
szybka pożyczka
pożyczki prywatne do 500 zł