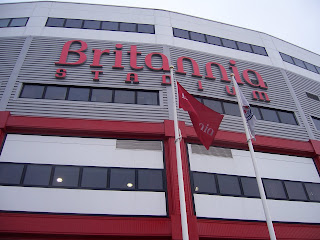 “Ooh, that’s too soft. Ouch that’s too hard.” “How about now?” replies a frustrated Groundhopper. “Argh, that’s way too uncomfortable.” We are sitting on leather sofas in the CSL furniture store, at the Giltbrook Retail Park, close to Junction 26 of the M1.

I’m cold turkey readers. I’ve not seen a game since the Battle of Market Drayton on December 12th. Mrs P has hauled me around every retail park in the county. I was enthusiastic last Tuesday, but it’s now Saturday morning, and I’m about as interested in buying a sofa as James Beattie is bothered about playing for Stoke City. I tell you what readers, I’ve sat on more sofas in the last week than Richard and Judy have in a lifetime. 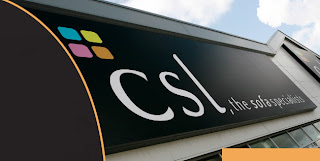 Yesterday was another wipe-out. I’d Hinckley United, Belper Town and Sutton Coldfield Town FC all up my sleeve. By 1.30pm they’d all fell by the wayside. I sulked and skulked about and ended up down the pub with The Taxman.

I’d made my mind up last night, that if my original choice of Gedling MW v Radcliffe Olympic fell victim to the weather, then I’d pick out an FA Cup tie where under-soil heating was involved.

I scour the fixture list on the BBC website. One sticks out like a sore thumb. Stoke City (no wins in the last six games) against Conference Premier York City (unbeaten in their last eleven games). 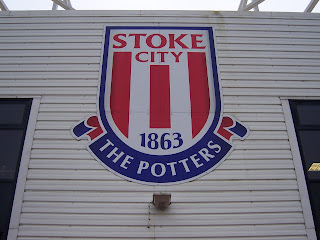 I’m in CSL tearing my hair out at the plethora of sofas we have to sit on. My phone goes off. It’s sweet music to my ears. “Stoke v York, game on. Pay on the gate.”

There’s just time to plonk myself on another settee, whilst listening to ‘This Charming Man’ by The Smiths on the store’s hi-fi system, before heading back home.

I squeeze in an M&S Stilton and celery soup, complete with French stick and a slab of Stilton left over from Christmas. 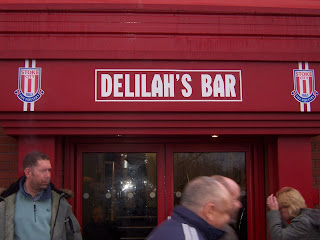 The Taxman is taking ‘The Skipper’ and Sticky junior down The City Ground for the cup tie against Birmingham City. I’ve decided to give it a miss.

I slip on my thermals and about four layers of clothing as the snow begins to fall heavily from the white skies.

I can barely see out the windscreen in almost blizzard-like conditions, as I head up to Bramcote to Big D’s house. His house is on a cul-de-sac and is like a skating rink. 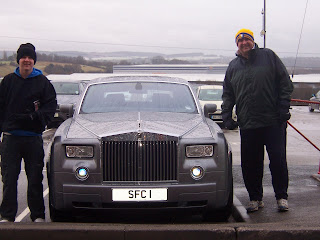 We jump in Big D’s 4x4. Roscoe, his lad, is on board. He plays in the nets for Mansfield Town centre of excellence. Although you wouldn’t have thought so, the number of times he drops his programme, later in the day.

The game is 100% scheduled to go ahead, what could possibly go wrong? The bad news arrives via Mark Pougatch on Five Live: the York City team bus is stuck in snow on the M62. Ooh heck.

We stop off for petrol on the A50. Big D shouts up a bag of Haribo’s which last all of five minutes. 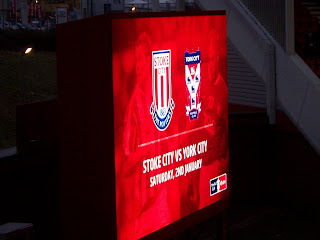 We’re in no rush to park as we exit the A500 enroute to the Britannia Stadium: the York City players are 30 miles away, stranded on the M6.

A shady-looking character fleeces me out of a fiver as we park the car at a Harvester restaurant.

Stoke is in the county of Staffordshire and has a population of 250,000. It’s famous for its pottery and coal mining. Sadly, both went into decline in the 1970s and 1980s. 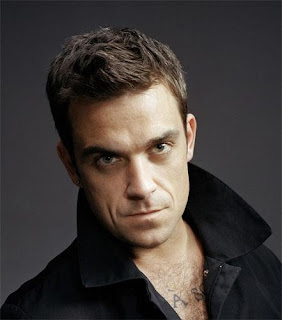 Stoke City chairman Peter Coates is also a local lad and the founder of the bet365 online gambling company.

The Potters are experiencing their first Premiership wobble. Cracks are beginning to appear beneath the surface. There are signs of unrest in the dressing room. Serial bad boy - James Beattie - felt the full force of Tony Pulis’ anger after a recent defeat at ‘The Arsenal.’ 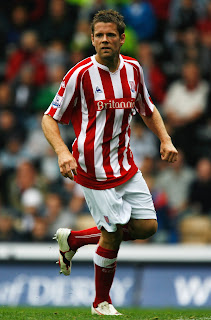 Players to have played for both Stoke and York include: Marco Gabbiadini, Paul Barnes, Richard Cresswell, Graham Potter and Jon Parkin.

We have a trudge around the outside of the stadium. You’re quite high up, and feel the full force of a biting wind-chill. We stand and admire the statue of wing wizard Sir Stanley Matthews.

It’s £15 cash on the gate and £3 for another top-notch programme: you’re never going to beat Manchester City or Gedling MW for a programme though. Big D has a Bovril, Roscoe a bottle of water and The Groundhopper a Coca-Cola. It has a Premiership price on its head of £5.40. 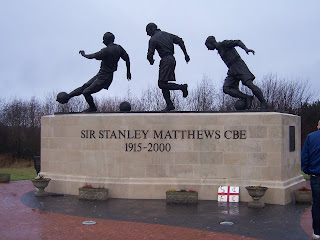 As we walk to our seats in a half-empty stadium, I can hear Melbourne singer Daniel Merryweather singing a cover version of The Smiths hit ‘Stop Me.’ It warms-up my freezing feet and gets them tapping away.

News has reached us that the York bus has arrived at the ground. It’s good of them to join us, but unfortunately it’s 2.58pm. The referee had threatened to call the game off, had they arrived a minute after kick-off time.

York has a population of 175,000 and ‘Our Mark’ lives up there. Famous people from York include, Guy Fawkes, Dame Judi Dench and Hunter from Gladiators. Dick Turpin was famously hanged on York Racecourse. New readers may want (or not want) to read my drunken day out at York races blog from July 2007, when poor old Sticky Palms was tucked up in bed before the start of Casualty. 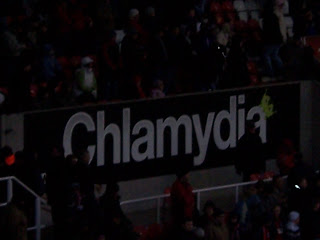 Who on earth made the decision to leave York at 10.15am? Why no overnight stop? Surely by battling their way to the third round they’ve made a few bob on the way? They’ve already earned over £60,000 in prize money. What a way to treat your players. I bet they are livid.

It’s good of the York players to join us for a few stretches at 3.15pm. I phone Mrs P up and tell her to turn down the chilli con carne, as we’re going to be late back.

Five thousand Minstermen fans have congregated behind the goal to our left. Most of them managed to beat the team bus here. Only ten thousand of the ‘noisiest fans in the country’ have bothered to turn up. 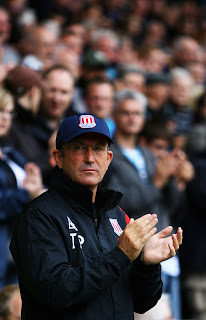 The York City fans taunt the Stokies with a couple of amusing chants: “Where’s your famous atmosphere?” and “Shit ground no fans bring a smile to the face of The Groundhopper.

I notice in the away end there’s huge placard advertising that you get yourself checked-out for the sexual disease Chlamydia. I’m way too busy looking for sofas to even think about contemplating that. 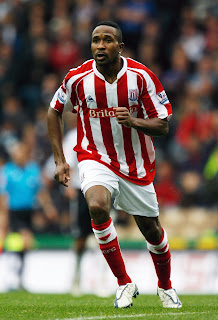 There’s little to choose between the two sides in the opening quarter. Conference leading scorer Richard Brodie hits a hopeful daisy cutter wide of the mark from 25 yards out. Stoke, meanwhile, rely on Rory Delap hand grenades to cause mayhem in the visitors’ box.

York take the lead on 22 minutes. Alex Lawless’ inswinging free-kick is flicked goalwards by the head of former Chelsea trainee Neil Barrett. It hits the inside of the upright and falls into the back of the net. There’s uncontrollable mayhem from behind the goal.

Their lead lasts barely a minute. Delap peppers the box with another missile and Daniel Parslow can only slice his clearance into the roof of the net.

Sixty seconds later and York fall behind. They fail to clear their lines from another Delap throw-in, the ball falls kindly to Jamaican striker Ricardo Fuller, who makes no mistake from close range. We all join the York City coach driver and take a breather at the break.

We watch a video on the big screen at the break of Stoke City’s League Cup final win over Chelsea over thirty five years ago. They are three of the scruffiest goals ever to grace a Wembley final.

Stoke win at a canter in the second period. Cornishman Matthew Etherington ends the contest with a beautifully flighted free-kick into the ‘keeper’s top right hand corner.

York stick to their passing game, but play a narrow formation. Special praise is to be mentioned to their powerhouse striker Michael Rankine, who looks a steal at £10,000 from Rushden and Diamonds.

It’s difficult to tell the difference between Rankine and the biggest of big-time-Charlies – James Beattie. The man has somehow commanded £14 million pounds in transfer fees and yet never really cut it at the highest level. He persists in showing the petulance of a schoolboy. He throws his arms up in the air, falls out with partner Fuller and gestures at the bench. His substitution is greeted with muted applause.

As for York, all I can I say is what Inspector Blakey used to say on On the Buses: “Get that bus of here Butler.”

Man of the Match: York coach driver.
Posted by Sticky at 9:20 AM