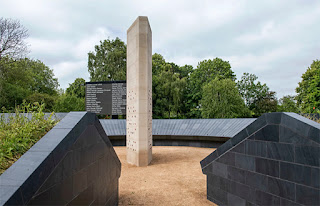 It's lunchtime on Sunday 13th December. I slide open the French window patio door and step out into the pouring rain. I've a massive golfing umbrella for company, as I slog it out, in blustery conditions, up towards Carlton Hill. I shed a tear as I pass The Brickyard pub, on the corner of Standhill Road. It's been close on 9 months since I last set foot in there.

I cross the 'Gaza Strip' entering into Sneinton. I glance across the road at the Fox and Grapes pub; the artist formally known as Peggers. Behind it is Sneinton Market, now rebranded as the Creative Quarter. Housed in one of the units is the greatest brewery on God's earth - more on that later.

The road banks to the left. Directly opposite is the Nottingham Arena. Little Mix are playing two nights in a row in May. My old budgie, Murphy Palmer, used to love whistling in his cage to their string of top ten hits - he'd have made the short two-mile flight down Carlton Road. He'd have fooled a doorman and blagged his way into the gig, before taking his perch high up on the gantry. He'd be gutted to hear that Jesy Nelson has quit the band  - she was his favourite. 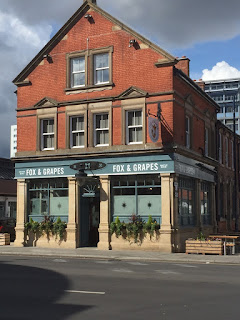 The wind whips up on London Road as I tightly grip onto my brolly for dear life. Notts County's Meadow Lane ground is to my left. The City Ground comes into full view as I cross over Trent Bridge, before swinging left onto Bridgford Road, with Nottinghamshire County Cricket Club's Test ground adjacent to me - does any other city have such an exciting vibrant area as this?

So what am I doing down 'Bread 'n Lard Island?' A quick re-cap folks. In early September I had a detached retina and four large tears. Life has been hard. I can't drive and to be honest, can't see out of my right eye. It would have been easy to get down-hearted and depressed. But I have taken the bastard on. I laugh at every setback; there have been a few too. It's 50/50 if I'll ever see out of the eye again. A toss of the coin. Life's that simple.

Mr Zaman, my legendary consultant at the Queen's Medical Centre, has suggested I get fitted out with some prescription glasses for my 'good eye only.' I waltz through Specsavers' door on The Avenue. I put the new 'magic specs' on. A real tear rolls down my cheek. I can see as clear as a bell. What a moment after three months of hell. 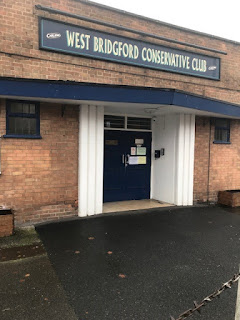 I skip down The Avenue whistling 'I Can See For Miles by The Who.' West Bridgford Conservative Club is deserted. I peer through the windows to make sure that arrogant tosser Dominic Cummings and his Tory chums haven't partaken in an illegal lock-in. I celebrate my short-sighted success with 8x cans of rocket fuel craft ale from the excellent Hopology beer shop on Melton Road.

I feel like throwing the new specs in the bin following numerous episodes of Emmerdale, Corrie and ITV stooping to an all-time low with The Real Full Monty on Ice. Thankfully, I have the run of the TV on Friday evening, as Ms Moon is on a social-distanced outing.

I race back from Tesco to watch Hull v Pompey - being a Lincoln City fan it's of great interest to me. I love a 50p bet for fun on the first goalscorer. Ex Imps legendary defender Sean Raggett is good value at 33/1. I'm just setting the bet up on the app when a corner comes sailing in and Raggett opens the scoring. I'm fuming folks - later it's announced it's an own goal  ... lol 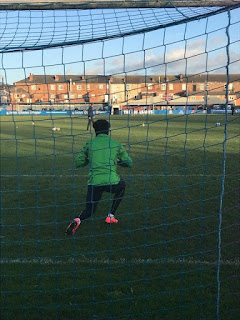 A Facebook video catches my eye before bedtime. Well-travelled Notts Non-League legend, Ryan Perkins, is winding a few folk up on social media about a feisty local derby taking place on Sunday morning, on the banks of the Trent, between Meadows United and Poets Young Boys - book me in Ryan.

It's Saturday morning and I'm all excited for my first football fix of the weekend.I get a text from Radford manager Big Glenn Russell to say there's a pitch inspection. Undeterred, I pack my rucksack with a hat, gloves, water and a sandwich - today I'm a proper hopper. Selhurst Street, home to the Pheasants, is a four-mile walk away; there's no better way to blow away the cobwebs and it's a beautiful day too. 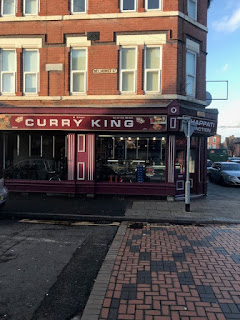 The journey to the ground takes me down Private Road in Mapperley Park. It's Millionaires' Row. I turn left up Mansfield Road and head towards Carrington. Folks form an orderly queue at the award-winning chippy, The Cod's Scallops. I head up Gregory Boulevard. Last time I walked here I had £1200 in my pocket following one of Roberto's charity games at Forest Recreation Ground. I wasn't 'arf relieved to hand the money over at The Grosvenor, an old Berni Inn, back in the day.

I pick up the pace up Radford Road, passing another abandoned pub called The Cricket Players. It's £5 on the gate. Big Glenn tells me to keep an eye on new signing 'Prince.' I ask if he wears a Raspberry Beret? I hook up with blog legend Mr John Harris and daughter Lucy's boyfriend, Tom, a cricketer in the Notts Premier League. John fishes some tuffees from out of his coat pocket. There's a choice of Fruit-tella or Double Dipped Chocolate Toffees. The PA announcer, shouting out the teams, does a cracking Norman Collier dropped microphone routine (one for the kids). 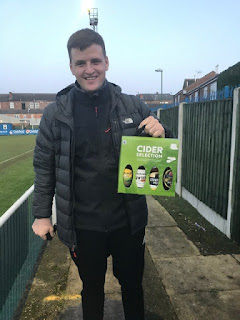 It's an FA Vase third round tie versus Westfields, who make the 230-mile round trip from Herefordshire. They race into an early two-goal lead, both Christmas gift-wrapped presents from Radford. At half-time the raffle numbers are shouted out. Tom, the jammy sod, has won a cider box set.

The visitors score a further three goals in the second half and are a class above. Big Glenn will be slinging his baseball cap to the ground in a fit of pique as the goals rain in. I text him later in the evening asking for a refund. The reply is not suitable for these pages. 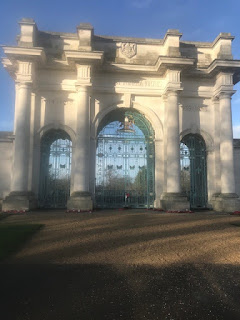 I'm up and at 'em on Sunday morning. There's time for a coffee and a couple of slices of toasted fruit loaf before I bolt out of the door. It's a similar walk to last Sunday. I dash over London Road and pass The Embankment; it's one of my all-time favourite watering holes.

I adore the walk down Victoria Embankment which was constructed between 1898 and 1901. I pass the Memorial Garden and War Memorial. In the distance, I can see acres of unused, green, open space, where once upon a time every football pitch would be booked up on a weekend.

The game is taking place on the far side behind the pavilion where back in the 1980s my slow medium-paced trundlers were dispatched back over my head and into orbit by Pakistani taxi drivers in the Notts Cricket Evening League. 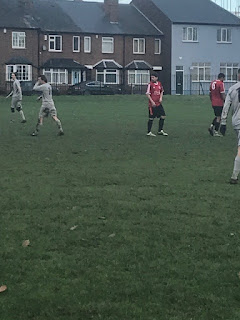 I was down here a few years ago, enjoying a stroll, when I was approached by a chap walking two Doberman Pinschers. He asked me where the nearest toilets were. It was none other than ex NFFC striker Jason 'Pineapple Head' Lee. It was a surreal moment and his head was shaved too.

Ryan Perkins has done a helluva good job on social media promoting the game, as a healthy crowd, full of characters. approaching three figures, have pitched up. The Meadows has been a hotbed of footballing talent. Jermaine Pennant, Wes Morgan, Julian Bennett and the late, great Pedro Richards were brought up in the area.

I catch up with lots of folks on the touchline before joining 'Our Joe' and 'The Keyworth George Best.' (my two lads). 'Our Joe' has got the hump with me as I said not to put Lincoln on the coupon yesterday; we won 4-0. 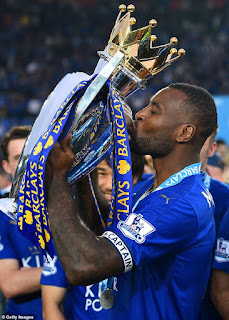 Ryan Perkins walks past the referee and shouts out "let's go to war ref.' It's an exciting game from the off, and played in a good spirit, with no malice. Everyone seems to enjoy it. Young Poets take an early lead but are pegged back to 2-2 just after half time. You just can't take your eye off the game and I'm taken aback at how good the standard is.

The referee is outstanding. He continually plays advantage and keeps his cards buttoned up in his back pocket. The players make it easy for him on both sides; they just want to play football. Perkins is comfortable on the ball and rarely gives it away. He puts a shift in too. Sadly, his team can't defend on the day and leave themselves wide open. Meadows equalise on two separate occasions but concede again twice within minutes.

Poets restore a two-goal advantage and see the game out comfortably. It's certainly whetted my appetite for more Sunday morning football. Next stop is Carlton Top Spot, a ten-minute walk from home. I can't 'arf pick 'em.

There's time to call in at the world's greatest off licence in Sneinton. I look forward to tucking into a few brews from Neon Raptor after a great morning out.

Man of the Match: Ryan Perkins (your videos on FB make me laugh out loud)

Great read as always, where is this magical off licence of sneinton you talk of?!
Loyal Carlton Fan