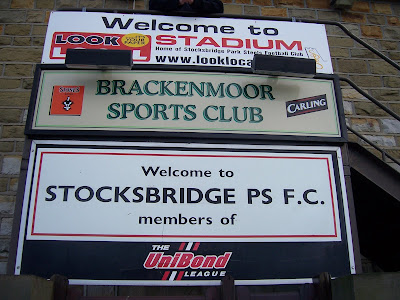 I’m thrilled at seeing the ten goal bonanza at Wollaton FC. Big D and ‘Willy’ are sinking a few pints in the clubhouse. I leave them to it and make the short journey home down the A52. Sticky’s straight to the beer fridge; life has never been better. Even my old team, the team I used to support – Lincoln City – have blagged a win in north London, at Barnet.

I’m as happy as Larry. I feel like ‘Singing in the Rain’, like George Sansome did on Britain’s Got Talent. But readers, there’s always, always a dark cloud on the horizon. 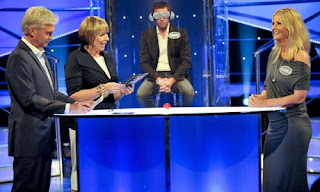 The first time I notice it is when the signature tune strikes up for the show. The audience are in rapturous applause. A silver-haired fellow wanders down the studio steps; alongside him is a rather plump lady (fat lass).

Yes folks, Mrs P has struck an all-time low in her TV watching schedule – it’s ‘All Star Mr and Mrs.’ I bury my head into the world of non-league match reports and do not resurface until I hear the familiar voice of former Radio Trent disc jockey – Dale Winton – on ‘In it to Win it.’ Tell you what though folks, that Gary Lineker’s missus is worth a second look. 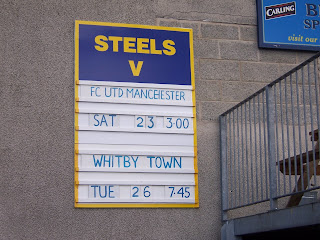 It’s Friday night. I’m a tad worried about the inclement weather again. I’ve earmarked Stocksbridge Park Steels ground for quite a while now. It’s rained heavily up there for most of the day. There ‘Look Local Stadium’ is situated in the foothills of the Pennines.

I’m in the kitchen, sipping a pint of Kronenberg 1664. I’m listening to Five Live’s preview of the weekend sport to come, with the brilliant Mark Poutgatch. There’s a huge thud in the lounge.

I race through the door to make sure everyone’s ok. ‘What the hell’s happened?” I enquire. “Calm down” pipes up Mrs P, “There’s no need to worry it’s only Fat Pat, off EastEnders, she’s lying in a heap on the floor, having feinted at the B&B breakfast table.” 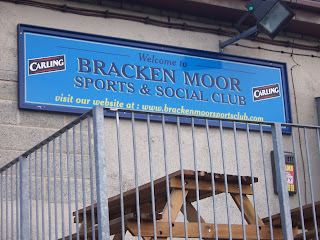 Saturday morning follows a familiar pattern to the previous week: An interrupted night’s sleep (insomnia), an early rise and traditional poached eggs. Brian Matthew plays Diana Ross and the Supremes 1968 hit ‘Love Child’ on his Radio 2 show. The lyrics are powerful and controversial for its day.

For those that don’t know I’m the talent identification officer (chief scout in old money) for Notts County’s centre of excellence. My remit is to uncover any emerging talent in the Midlands. This morning my team of scouts are out in force in the north of the county. 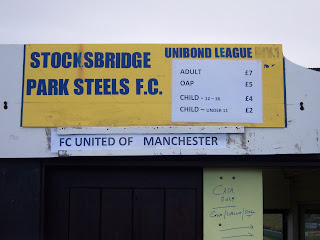 I ring up my snout in the Newark area. He tips me a lad who is playing in the old mining village of Clipstone. I drive up the A614 and turn off opposite Rufford Park, passing Center Parks Holiday Village.

The towering headstocks of the old coal mine are a feature of the village. I pull into a school; the game has already kicked off. I watch the first half. The player in question is not quite what we are looking for.

I head towards Debdale Lane, to meet up with my gaffer, but I’ve just missed him. I take in another game, but there’s nothing doing. I head up towards Stocksbridge. 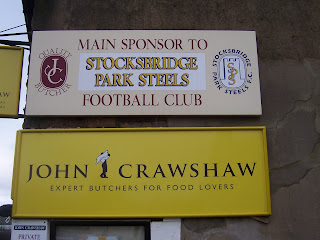 It’s a routine run. I join the M1 at Junction 29 and exit at 35A. Mark Pougatch’s Five Live team are talking up Accrington Stanley’s chances against Fulham at the Fraser Eagle Stadium.

There’s a steep climb on the way into Stocksbridge. This must be one of the highest vantage points in the area. I can still see a smattering of snow on the top of the Pennines.

I park Sally Gunnell (not much to look at but a bloody good runner) right outside the turnstile. A Stocksbridge official is situated in the crow’s nest on the lookout for Mancs crossing the border. It’s the Battle of the Roses. 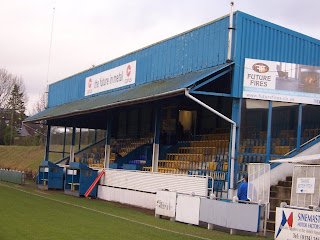 I check the game is on. A very kind official ensures I’m fetched a programme. I decide to stretch my legs and walk into town. I’m forewarned about the 1 in 3 gradient I’m to be greeted with on my return journey.

The high street is fairly unremarkable. It’s a bit of a one horse town. There are a couple of bars, Ned’s Pizzas and Capone’s Kebabs.I’m on the verge of an about turn, when I see in the horizon a moment of beauty and class – it’s the Stocksbridge Co-op. It’d be rude not to. I snaffle up a cheddar ploughman’s sandwich as part of a £3 meal deal. 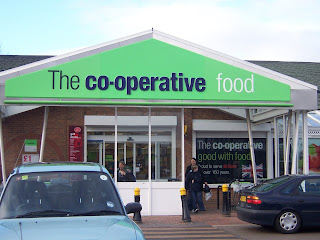 I sit on a seat opposite the old Palace Cinema, cranking myself up for the steep journey back to the ground. I’ve only walked 500 yards and I’m already fagged out – it’s like walking up Scafell Pike.I notice a cemetery to my right. I’m that out of breath, I might as well dig myself a hole and jump into an early grave readers.

I’m finally back at the ground, with a face as red as a FC United shirt. It’s £7 on the gate. I’ve already paid £1.50 for another outstanding programme. It’s a £1 for a raffle ticket. 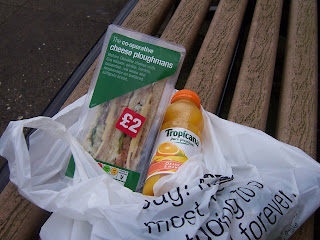 Stocksbridge is a small town in the civil parish of Sheffield, in the People’s Republic of South Yorkshire. It has a population of just over 13,000 people. Footballers born in the town include: Oxford United manager Chris Wilder and former West Ham player Peter Eustace.

The area was once famous for its steelworks. In 2003 Corus announced proposals to transfer steel melting processes from Stocksbridge Works to Rotherham Works, entailing the closure of the Melting Shop and the Hot Rolling Mill, with the loss of 350 jobs.

I’m straight upstairs into the cosiest bar ever (apart from Wollaton FC). The place is packed with Mancs. I fight my way through to the bar and order a pint of cider – that walk and sandwich has caused quite a thirst. 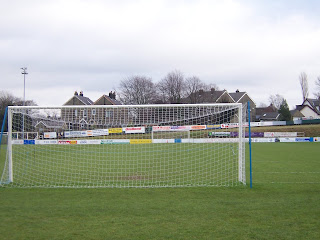 Preston North End versus Chelski is on the TV set, perched up in the corner of the room. Nicolas Anelka puts the Blues two up – not one person in the room bats an eyelid. The view from the bar of the ground, with the Pennine hills in the backdrop, are spectacular.

I’ve still got my scouts’ coat on and have begun to come out in a sweaty rash. There’s nowhere to sit down, or room to take my coat off. I finish the cider off in four slurps and head outside again to cool down. 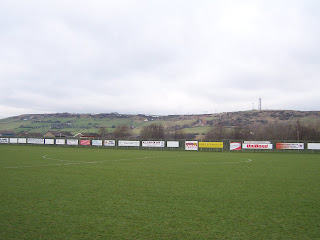 I sit alone in the main stand, listening to the sound checks. The DJ ought to audition for Heart FM. He plays three shockers in a row – ‘Love Really Hurts by Billy Ocean (Mrs P saw him live in 1980), ‘Mary’s Prayer’ by Danny Wilson and ‘Young Hearts Run Free’ by Candi Staton. It’s like being slumped against the bar in Madison’s nightclub in Nottingham circa 1980.

We’re not allowed to walk around the ground. A steward (from Sheffield Wednesday) explains that they’ve only 6 yellow coats on duty. Effectively only two sides of the ground are going to be open for their biggest crowd of the season. 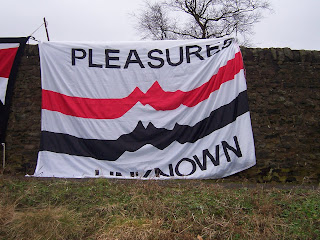 I’m chatting to an FC United fan. To be honest I can’t get a word in edgeways. He’s telling me that ‘United’ only have a budget of £3000 per week. Also a lot of the revenue is swallowed up by not having their own ground or clubhouse – they play home games at Bury’s Gigg Lane.

He brags how he bought a ticket for the Champions League final on eBay. ‘Don’t tell the missus he chuckles.” Yeah and don’t tell mine mate (Mrs P) that I’m off to Villa v ‘The Arsenal’ next Wednesday at £43! Ouch!

We’re told to take our seats in the stand, as the players are ready to kick-off. The FC United fans are largely congregated behind the far goal. One or two of their flags have caught my attention. I leave the stand and head towards them to take some photos. 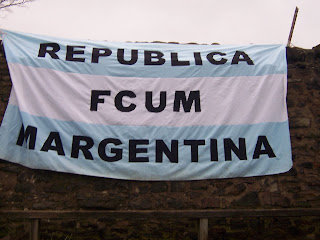 United flags are plastered all over the ground. I particularly like the ‘Pleasures Unknown’ one – a reference to the cult album by Manchester indie band Joy Division. I’m not so impressed with the Argentinean flag. (It’s a two fingered salute at the anti-Beckham brigade of 1998)

The United fans are class. Their repertoire of ditties amuses The Groundhopper. They change the lyrics to ‘Peaches’ by The Stranglers and ‘Anarchy in the UK’ by the Sex Pistols. They’re certainly more entertaining than players, who put in a ring-rusty performance in the first 45 minutes. FC United do chose though to keep it on the carpet. 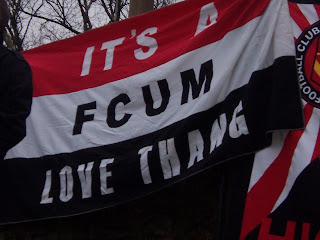 The FC United following sing a British terrace favourite on 20 minutes and one The Groundhopper often sings at work: ‘We all hate Leeds scum.’ Everything is rosy in the garden.

The most controversial moment of the first half happens on 35 minutes with a text from Mrs P to say the boiler is kaput and is going to cost £500 to fix. Call it £543 if you include the Villa game.

United forward Joseph Yoffe races through on goal and is wiped out by Steels’ ‘keeper Ben ‘Kamkaze’ Scott. It’s only a yellow card. Phil Marsh’s curling effort is cleared off the line by a Steels’ defender. 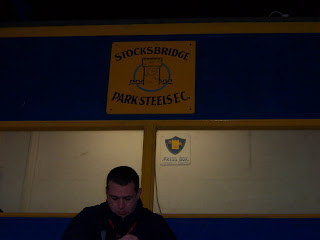 Former Kilmarnock and Notts County winger Iain McCulloch (career finished by a collision with Man Utd ‘keeper Gary Bailey) rings me at the break. He’s been watching a game for me and has found a player. The conversation is short and sweet, as he mumbles more than Kenny Dalglish.

FC United ooze class and confidence in the second half as they attack ‘our’ end. There 4-3-3 formation begins to pay dividends. Jerome Wright and Carlos Roca run rings around the Steels. Their endless supply of crosses has no one on the end of them.

The Steels show a physical and cynical nature to their game and keep the referee busy with notebook and pencil. 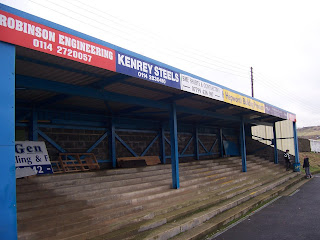 United take the lead on the hour. A flowing move finds Roca in space on the right, he feints to go outside, cuts inside and buries the ball into the corner of the net. But they can’t kill the game off. Brett Lovell, a man better built for the game of rugby, is dismissed for a clumsy challenge.

FC United are running down the clock with the minutes ticking away, when a header from a free kick squirms out Ashton’s hands leaving Steels’ striker Andy Ring with the simple task of stabbing the ball into an empty net.

I’m desperately sorry for United. They’ve passed the ball beautifully but have lacked the killer instinct.

Man of the Match: FC United left back.
Posted by Sticky at 7:59 PM

Good report that - thank you! You probably squeezed past me on your way in & out of the bar, it was very cosy.

Just to clarify - the "Margentina" flag is an homage to our manager Karl Marginson and not a dig at any anti-Beckhamites (although if it annoys them at the same time, all the better).

Glad you enjoyed the singing. After 6 weeks without a game it was good to be able to raise our voices again.

The FC left-back is/was Ludo Quistin and you can't have him! He's probably marginally too old for the NCFC CofE !!

Fantastic report.As a stocksbridge lad I found your report on stocksbridge and the club to be 'spot on'
Your reporting style is a breath of fresh air.

Please come back again, especially when its windy I would love to hear your comments on the football then.