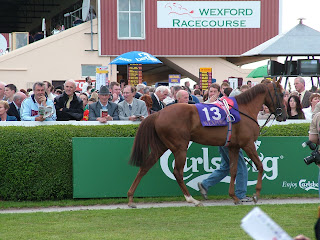 An anecdote: It’s Sunday October 24th 1999. I’m in the south eastern Irish town of Waterford, which is famous for its crystal. It’s the birthplace of: Val Doonican, Gilbert O’Sullivan, Jim Beglin and John O’Shea. Twenty five of us are on ‘The Architect’s’ stag do.

It’s the weekend from hell. Sticky Palms is streaming with cold, but just couldn’t miss this gig. We’re stopping in the worst hotel (I use the word hotel loosely) in living memory.

We’ve been made to feel very, very unwelcome. There was friction in the hotel bar on Friday night. It would have been quieter stopping on the Faulds Road in Belfast. 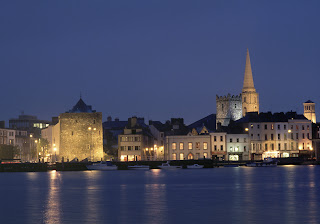 It’s hammered down with rain for two days now. On Saturday eighteen of us braved a local golf course in monsoon conditions. The remaining seven are holed up in a bar, next to a bookies. They gamble and drink themselves into a drunken stupor.

We’re all now gingerly recovering in a cosy seafront bar in the charming town of Wexford. We make our way to the racecourse for an afternoon meeting.

The ‘Magnificent Seven’ from yesterday still have £100 left in the kitty. Their leader is a guy called ‘Wrighty’ – he is a living legend. He bangs the whole wad on a horse in the first race and immediately doubles all their money.

He’s determined to fritter their winnings away and backs another nag at 2/1 which wins by a country mile. Wrighty’s waving £400 notes (punts) in the air now. 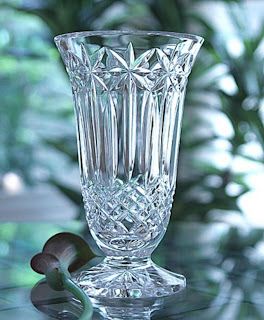 A horse called KC Electric has caught his eye on the race card – it’s priced at 4/1. He sticks the lot on. It’s the first time I’ve seen a bookie rub his board and reduce the odds, just because a mate has had a bet.

KC is on the second circuit, three from home. He’s absolutely pissing it. He jumps the second from home like a stag. Wrighty has his hands on his hips and is doing an Irish jig of delight – the locals are lapping it up. The boys are going to drag nearly £2000 – oh my God.

He’s fifteen lengths ahead as the jockey straightens up approaching the final fence. Suddenly KC veers off at a right angle and clatters into the inside rail. He’s had a heart attack and so has Wrighty, as his two grand winnings go up in a puff of smoke. Talk about the luck of the Irish (bookie).

Nothing tickled my fancy on the midweek fixture list. After the floodlight failure at Stone Dominoes the previous week, I’ve took a decision not to venture too far in the evenings until the spring. 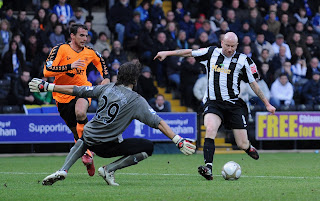 I sit in the kitchen on Tuesday evening and tune in to the delightful, veteran commentator Colin Slater, who is broadcasting for Radio Nottingham at Meadow Lane. Lee Hughes leaves it late for the Pies in a 1-0 victory over Swindon.

I pull the curtains open on Saturday morning. I’m surprised to see a dusting of snow on top of the frosty surface. It’s only 7.30am. A few days ago I trooped down the stairs in a state of excited anticipation. It was the first day’s play in the Ashes.

Australian Junior Wood Chopping Champion, Peter Siddle, had cut down to size a cocky and over-confident England side. His 6-54 included a hat-trick on his 26th birthday. I quickly check Sky Sports News – Australia have already racked up over 500.

I save Sticky jnr the bother of riding his bike in the slippery conditions and help him deliver his papers. The Daily Mirror is reporting that Arsene Wenger has ‘popped one in the onion bag’, which is more than can be said for his toothless strike force in Braga on Tuesday evening. 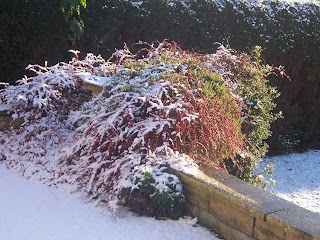 I’m tipped the wink that a kids game is on in West Bridgford. I have a cruise around in Sally Gunnell, dropping in at Rushcliffe Comprehensive, West Park and Regatta Way – all games are postponed.

I arrive home at 11am. Mrs P has that look in her eyes which suggests deployment to a domestic task is imminent. I volunteer to clean the inside windows. It’s probably the most mundane task in the world, readers.

I stick the i-Pod headset into my ears and away I go. A couple of 70s tunes soon get me reminiscing about Youth Club. I remember ‘Disco Night’ on a Tuesday when the DJ played Boney M’s ‘Sunny’ and George McCrae’s ‘Rock You Baby.’ Warrington born Stone Roses lead singer, Ian Brown, brings me back to the modern age with his solo hit ‘Sweet Fantastic.’

Mrs P has shot off with her mum to a retail park In Netherfield. Apparently we need a new toaster and hairdryer. It gives me the chance to have a little skive. 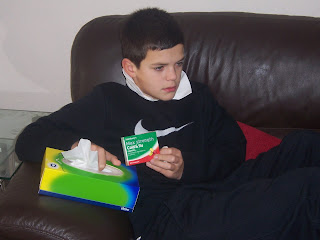 The poor old ‘Skipper’ is sprawled out on the sofa watching Villa play ‘The Arsenal.’ He’s full of cold. Whilst most of the country is covered in snow, Aston Villa sprinkle the playing surface with water prior to the match. I watch Marseille born midfielder, Samir Nasri, put the visitors two to the good.

I make a few calls. Anstey Nomads game has fallen victim to the snow and frost. Loughborough Dynamo is just about the only game still on.

Rammers picks me up in the Audi soft top outside the Fairway pub. I thought it was Penelope Pitstop pulling in for a Campari and soda.

It’s a straight forward drive down the A60, past the University, followed by a left hand turn down Water Mead Lane. 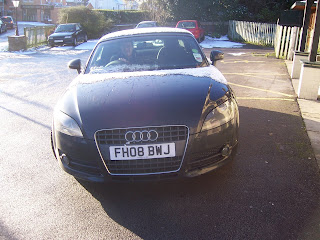 Loughborough is a town within the Charnwood borough of Leicestershire; it has a population of over 55,000. Coronation Street’s top train spotter and potential groundhopper, Roy Cropper, (David Neilson) was born in the town.

It’s £7 per man on the gate. The programme is £1.50 and is an absolute must toilet read. There’s controversy just before kick off with a text from Mrs P. There’s been an incident between her and a girl on the tills at Netherfield’s Tesco: Final Score is Tesco’s 1 Mrs P 0 – It’s not a good time to ask if Finley can sleep in the kitchen tonight.

We stand the opposite side to the dug outs. The pitch is coated in snow but perfectly playable. Rammers says hello to the referee – he’s probably sent him to the stands a couple of times in the last 20 years or so.

Both teams are keen to get the ball down and play. Sutton Coldfield have some big lads and look stronger on the ball. 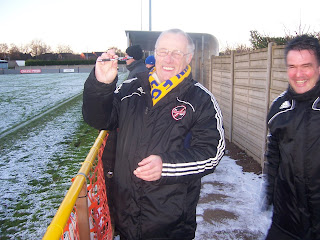 We’ve been joined by an elderly, bubbly gentleman, who’s wearing a Unibond jacket and is wrapped in either a Carlton Town or Mansfield Town gold and blue scarf. He’s jousting with Rammers. Turns out it’s the infamous ‘Evening Post Brian’ who features in ‘Beardy Malc’s’ ‘On the Road’ blog.

Brian hasn’t half got some rattle. I nearly miss the first goal as he reels off yet another anecdote – he’s another character that the Non League throws up from time to time.

The Royals’ Owen and Marshall exchange passes and prise an opening for former Walsall scholar Harry Harris, who places his shot into the corner of the net. 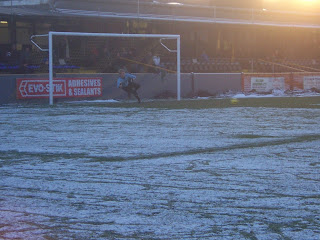 On 23 minutes Sutton Coldfield are awarded the softest of penalties, which fortunately for Dynamo is superbly saved by their ‘keeper Laurie Pearson.

Dynamo enjoy a golden spell. Both full backs bomb down the line. It’s from a Noble cross that Dynamo equalize in the 39th minute with Jay Lee Hodgson nodding home at the far post.

It’s bloody freezing folks. We’re straight into the clubhouse. There’s a huge queue for tea. Rugby from Twickenham is on one TV, whilst there is horse racing from Newbury on the other – I’m interested in neither. 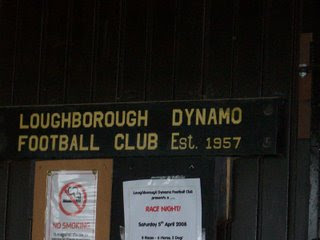 We stroll back to our usual spot. Sadly ‘Evening Post Brian’ hasn’t tagged along –it’s a shame because he didn’t half make me laugh. He’d phoned up ‘Beardy Malc’ in the first half to tell him that Rammers and Sticky will be pledging £20 towards his charity.

Big D has text in from the Darlington v York City FA Cup tie. That bungling fool Roscoe has tipped up an entire cup of Kenco coffee down his designer wind cheater.

There’s a nice flow about the game as both teams search for a winner. There are chances at both ends but The Royals have that little more cutting edge in attack. 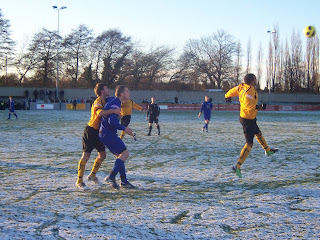 The winner comes on 67 minutes. Harry Harris floats a 22 yard free kick over the wall and into the top corner. Dynamo don’t give up without a fight but the Royals just about deserve the win.

I can barely feel the end of my toes. We end up next to a log fire in the Swan and Rushes in Loughborough town centre and finish the day off with a couple of real ales.

Man of the Match: Craig Milligan
Posted by Sticky at 7:09 PM

Great memories Stickster ! Is that the bar with Johnny Rogers behind it, and we went to bed at 7am, only to return at 8am for breakfast....lol
I seem to recall returning to our room to find nothing in it but the paint on the walls.

Top Bloke is Brian, but he can waffle on. Cant`t believe you haven`t met Brian before Nick, he is a local Hero and has been on the scene at Shirebrook,Rainworth for many years and is now a director at Carlton Town.

its nice to see your boy is keeping up the family tradition, tissues and paracetemol, have you showed him how to fill in his 1st sicknote yet? or does he want a home visit?