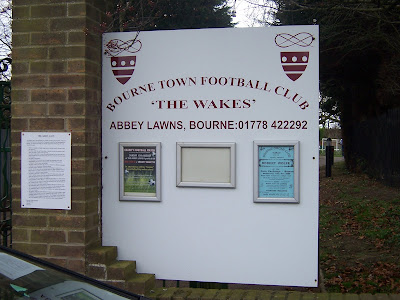 I’ve rekindled my love affair with Notts County after spending three seasons across the water at Forest. It wasn’t a difficult decision to make as I’ve become frustrated with my role as a scout co-ordinator for the Tricky Trees. It just wasn’t challenging enough. I like working for the underdog.

I will be responsible at ‘The Pies’ centre of excellence for the entire scouting operation and I’m relishing the challenge ahead. I fully expect ‘The Reaper’ and ‘Homebird’ to come on my message board and flame me. 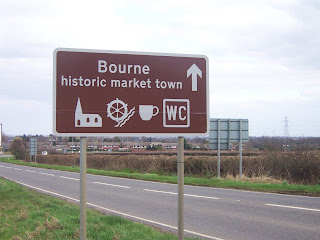 I spent two years at County as a scout before they controversially closed their youth system down. I was hurt, angry and said things on the blog that I don’t regret. It’s all water under the bridge now; it’s given me a second chance to scour inner city Nottingham and give boys an opportunity to do something positive in their lives. ‘I had a wheelbarrow ……….’

Mrs P is fuming about the new job; she’s a born Red. So are the kids, too. No-one leaves Forest for County except for Sticky Palms. I’m afraid The Groundhopper will become a watered down affair next season. I will do well to get 20 new grounds in and about 30 games, top whack. 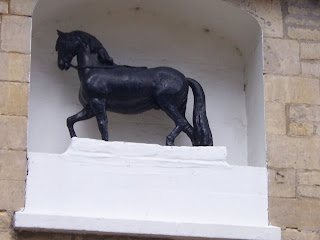 Trumpy Bolton finally got back to me with his preferred choice of ground for Saturday. As regular readers will know his mission in life is to make a financial transaction in every village in England. There is a pub a few miles outside Bourne that he’s never been to. Bourne it is then.

It’s Friday night and The Groundhopper is in excruciating pain. I have a rotten, black molar in the upper part of my mouth that is causing me discomfort. I’m on antibiotics and will take a rain check in the morning.

I’ve not slept well but can’t let the legend Trumpy down. I ring him early doors to check on arrangements; he’s just opening his second McEwans of the day. Oh my God. 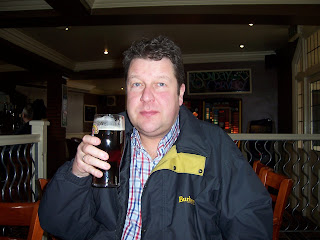 Both my boys are playing football today, what sort of father am I buggering off to Bourne with a drunken old fart? I’m watching Sticky junior tomorrow and ‘The Skipper’ next Saturday. I try my best to juggle events in my crazy world of football. Mrs P has a season ticket for both our sons’ teams.

White Van Man has failed to make the team bus. Man Utd are playing Liverpool; he was never going to miss that one. He’d have had full English and will be dozing on the sofa, awaiting kick-off.

I drive past WVM’s house to pick up Trumpy. I toot my horn WVM sticks his fat belly out the window. It’s before the watershed and the sun goes in. 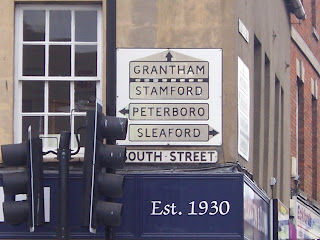 Trumpy comes sauntering out the front door. It’s the same old story. He has his cheesecloth shirt on and a Sainsbury’s lemon and lime plastic bottle, full to the brim with cider. It’s like Groundhog Day.

We drive the scenic route through Melton Mowbray onto the A607. Five Live are wetting themselves over the Man Utd v Liverpool game. We’re just chatting away. Trumpy has been on a few benders since we last met. He’s took Winchester and Abingdon by storm.

Disaster strikes as we approach the A151, it’s closed. Thankfully I’ve the sat nav tucked away in the glove compartment. 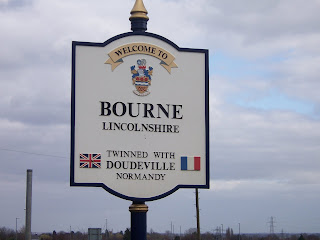 Trumpy’s lined up a country pub in the village of Grimesthorpe. Apparently Elton John played in the castle grounds last summer. The road closure has cost us about fifteen minutes. A roaring fire and the Bellamy Brothers on CD awaits us at this glorious countryside inn.

Trumpy shouts up two pints of Tom Woods, which is situated in the Horncastle area of Lincolnshire. We decide to dine, despite a tip-off from Eastwood Town assistant manager John Ramshaw, that there is a top chippy close to the ground.

Trumpy orders a chicken baguette with chilli sauce, The Groundhopper has a smoked salmon and scrambled egg baguette. The music takes a turn for the worst with the dreadful Endless Love by Lionel Ritchie and Diana Ross. Trumpy commiserates with a pint of strong cider. 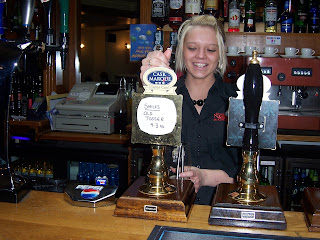 It’s a short trip into Bourne and we stumble across the ground. We park on the road as there appears to be no car park at the Abbey Lawn.

Bourne is a market town on the edge of the Fens in the district of South Kesteven in Lincolnshire. It has a population of 12,000. The Wakes are in the United Counties League Premier Division but are having a miserable season and are battling against relegation. They recently parted company with their manager and have a caretaker installed until the end of the season.

We head back into town for a look around. Trumpy is keen to quench his thirst and dives into the nearest watering hole. He has a pint of Old Tosser, whilst it’s just a half of 1664 for Sticky Palms. We are served by the cutest of barmaids. 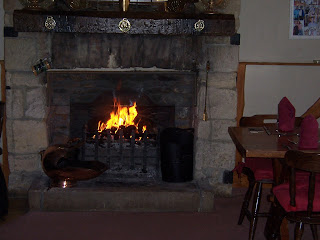 We take a walk up to the ground and admire the picturesque setting. It not only hosts football but also bowls, cricket and tennis. There’s an open-air swimming pool and a recreational area for kids to play sport and run around in general.

It’s £4 admission and £1.50 for the worst programme I’ve bought in three years of groundhopping. Sorry Bourne but it’s bloody awful. It has hardly any reading content, is full of adverts and is paper thin. A blatant rip off.

The bar more than makes up for it; Trumpy is quick to sniff it out. The legend orders a Magners; in drinkers’ terms, he’s ‘in the zone.’ 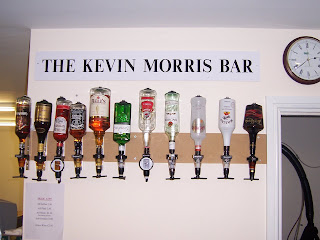 Reports are coming in that ‘United’ have been drubbed 4-1. I’m immediately on the blower to WVM, but I’m met with with a volley of abuse. I am pishing myself.

I take a walk around the ground whilst Trumpy shouts another Magners up. There’s an old fashioned stand on the halfway line. The rest of the ground is open. A public footpath runs straight through it and makes the place look busy.

There’s plenty of grass on the pitch but the ground looks firm. A strong wind blows down the pitch. It’s disappointing that there’s no music or a PA announcer to tell us all the line-ups. 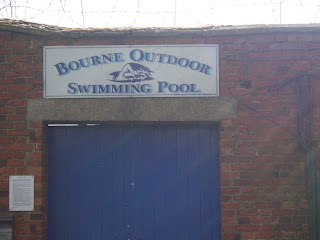 Wellingborough Town 2004 are today’s visitors. It’s a town 10 miles from Northampton with a population of approximately 50,000. Famous people from the area include Bauhaus singer Pete Murphy and Radiohead front man Thom Yorke.

I’ve bad vibes about the game and have already expressed my fears to Trumpy that it may be low scoring. Wellingborough have only scored 27 goals whilst Bourne have conceded 85. 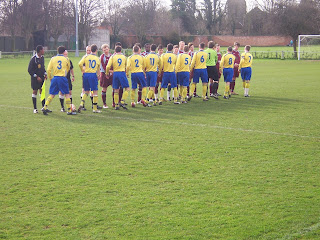 I’m on the opposite side of the pitch to the stand as the players kick off but spot our man staggering out the bar, stumbling up the stand steps, gripping the handrail as if his life depends on it. He’s waving to me from across the pitch.

I decide to check out what mayhem he’s causing. He’s already made acquaintances with the local reporter from the Bourne Free Press.

The game is dire; the poor hack will have nothing to write about at this rate. The Wakes look the more likely to score, with Wellingborough looking a pitiful outfit. Bourne’s Number 7 misses a couple of good chances and Wellingborough threaten a few times. The standard is shocking. Stewart and Lloyds look like claiming the League title and they were awful when I saw them earlier in the season at Glossop. 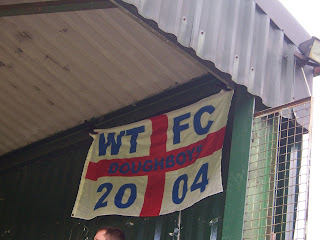 The referee gives us all a breather by blowing the half time whistle. Trumpy had already instructed the friendly barman to tuck a couple of bottles of cider away in the fridge to keep cool.

We notice that Nottingham born Brighton manager Russell Slade is enjoying a 2-0 score line against his previous employers Yeovil Town, who controversially went their separate ways a few weeks ago. 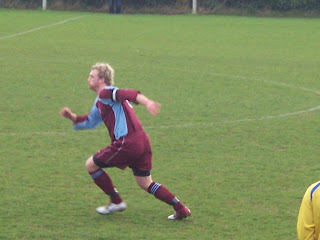 Trumpy and I also part company as he slips open another cider. Our new pal of a journalist has now been joined by a photographer who happens to be his girlfriend; God knows what lines Trumpy will be spinning her.

He looks at some of the notes the journo has been making and asks the young man whether he has been drinking as he can’t decipher the scribbles. The hack replies that it is in fact shorthand that he’s been jotting down; Trumpy is impressed. 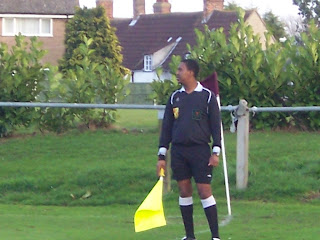 There’s a huge cheer from Trumpy; there’s been a goal on the far side where some u10s are playing footie with jumpers for goal posts.

The game deteriorates even further, there’s nothing doing and it’s spoilt by the breeze and lack of ability. Wellingborough are terrible. Bourne fashion even more chances despite playing against the wind.

The Bourne captain has been subbed; we’re surprised he’s lasted this long as he looked fagged out after ten minutes. His only contribution to the game is a couple of reckless tackles, which finally result in a yellow card. 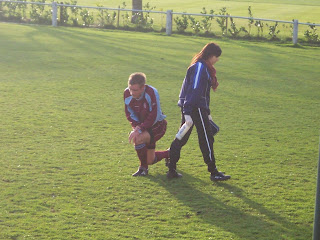 The Bourne forward wastes the best chance of the game 5 minutes from time, spooning a shot over the bar from close range. We’re both ready for a hasty exit and bolt out of the gate at the final whistle.

A cracking day out, spoilt by a bloody awful game of football. Nice ground and barman though.

Ah my old home town of Bourne where i saw my first game off football at the age off nine. Bourne v Sleaford score 5.4 hot sunny August night.Brings a tear to my eye just thinking about it, say hello to the old town for me.

Dear Sheridan Poorly are you sure it's molar trouble. Could be something a lot more serious.

Also my old home town. A great report - long gone are the days when the Abbey Lawn was the envy of Lincolnshire's other non-league clubs. The ground once had the best facilities by far but its idyllic setting, in an open park shared by other sports, has meant that it has been left behind by other modern ground developments. Regularly I read sorry tales about vandalism on the internet at the site and more than often it is the football club that has been targeted. I remember the club in the early 1990's. Average crowds of 300 watched the Wakes then with at least 30 travelling away. I am told only about 30 watch the home games now. A sorry tale - where did it all go wrong? At least I've got the memories hey.............