Next season's visits to include: 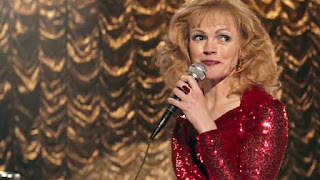 It's Thursday evening and I'm driving down Loughborough Road (A60) past the mint green-topped offices of Nottinghamshire County Hall, on a sun-drenched Trent Bridge. It's my penultimate game of the season. On Tuesday I saw an in-form Radford FC turn over second-placed Teversal 2-1 up at Carnarvon Street, in the north of the county. Big Glenn's Pheasants are on flames. 'The Milky Bar Kid' (Ryan Smith) bagged his 27th and 28th goal of the season - he plays with a heart and soul.

I'm listening to Five Live. The brilliant Conor McNamara and the biggest idiot in England (refused to play for them once), Chris Sutton (killed my club) are at the Bernabeu Stadium in Madrid for the Real v Bayern Munich Champions League second leg. Sutton is waffling on as music blares out of the ground's PA system. I recognise the tune at the drop of a hat and nearly crash the car into the central reservation. Real Madrid's 'DJ' is playing 'Rock 'n Roll' by convicted rapist Gary Glitter, who was arrested under Operation Yewtree (BBC related, as it happens) and jailed for 16 years in 2015. You'd have thought the BBC would have faded it out - I shake my head in disbelief. 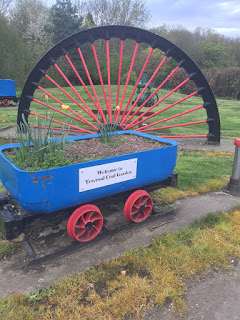 It's a tight squeeze to get the 'Rolls Royce' into a spot at a jam-packed Green Lane, home to the mighty Clifton All Whites, whose alumni include: Jermaine Pennant and Jermaine Jenas. I get chatting to a few Non-League folk who frequent the circuit.

The cheery, happy-go-lucky, chrome-domed James 'Tosh' Turner (a very dear friend) wanders over to me to say hello. It's his ninth year as manager - "just one more" he says, like he does when you're out on a session in Notts or Majorca with him. High-flying Dunkirk are in town tonight and share a healthy rivalry with Clifton.

All Whites take a shock lead on the stroke of half-time, but are pegged back a few minutes later by a goal from the industrious Ben Moore. Scott Litchfield restores Clifton's lead with a howitzer of a strike from 25 yards - it's a goal of high quality. Back come Dunkirk, with their old warrior Steve Chaplin evening things up, to set up a grandstand finish. 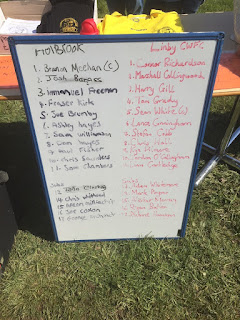 Cult hero and housewives' favourite Ollie 'the Hitman' Clark is having the game of his life - Sticky P loves him to bits, particularly when he gets booked, so I can wheelbarrow my winnings out of Corals bookmakers on Ruddington High Street. He duly obliges with a customary caution (No.14 for the season) dramatically waved in his face by an overzealous official. I know he'll knuckle down. His Dad shouts out from the dugout "get us a winner, Son." Minutes later, after a faux pas by the cocky Clifton 'keeper, Clark skillfully guides the ball into the bottom corner of the net, setting off wonderful, raucous celebrations - he wheels away in the direction of the bench before being mobbed by his team-mates. All I can think of is, don't take your shirt off Ollie, or it'll be an early bath.

I have a day off on Friday in lieu of working this coming Bank Holiday Monday, when I head off up to Dunblane, in Scotland, to play tennis with Andy and Judy Murray - I'm actually in the town on a piss up (Sales Conference). I spend the day in the garden, potting plants and scarifying the lawn. I shower up before jumping on the No.27 bus into town. 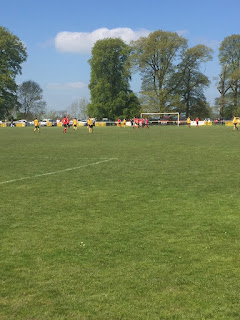 I waltz through the back doors of The Embankment and shout up a pint of Lowry from the Hydes brewery in Manchester. I plonk myself on a corner seat in the superb, sun-soaked beer garden - the best in North Bridgford, full of proper Nottingham folk. I'm joined by my best mate Dafty. We chew the cud and catch up over a couple of beers, before crossing Trent Bridge towards The City Ground. 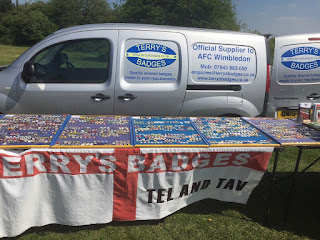 It's £4 on the turnstile (thanks Dafty) for the under 23 play-off final (whatever that means) between Forest and the Trotters of Bolton. I look at the team-sheet and notice a lad playing for Bolton whose grandparents I met on my jollies in Nerja, southern Spain, last summer.

Despite the procession and turnover of managers, the Tricky Trees have still managed to produce and risk playing youth in their first team - only King Billy Davies (a legend in his own lunchtime) turned his back on the Academy. Nick Marshall, previously, and current Academy Director, Gary Brazil, should take credit for this. We clock Darius Henderson lurking in the back row of the main stand - he's a talent scout working in the USA.

Bolton play Forest off the park in the first half and are two to the good at the break. First team boss Aitor Karanka is viewing proceedings from the Directors' Box, along with his entourage. Forest rally in the second half, clawing a goal back. It's not enough to win the game. After the final whistle, following a fine performance, 21 year-old NFFC 'keeper, Liam Bossin, appears to push the ref in the chest and is shown a straight Red - you wouldn't get my boy Ollie Clark stooping that low! I manage a quick scoop in a deserted Cock and Hoop in Nottingham's Lace Market, before grabbing a Five Guys burger and jumping in a taxi home. 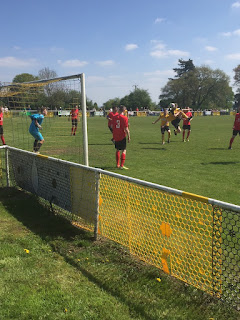 I'm up at nine bells, making up a sausage sandwich, ironically at the same time as former snooker player John Virgo (off the BBC's Big Break) appears on Danny Baker's 'Sausage Sandwich Game' on Five Live. I'm out, about and driving solo up the A610 before 10:00am. The Central Midlands League have organised a groundhop weekend up in Derbyshire. Weird and wonderful 'Hoppers' will be pitching up in the village of Holbrook from all over the country; indeed some will be from Europe - it's comedy gold and not to be missed.

I need to tick off Holbrook St Michaels, close to the town of Belper. I zip up the A610 admiring the scenery and floral displays in the gardens and the villages of Denby and Kilburn. Holbrook is to die for, but must endure some harsh winters - I've still to visit the Dead Poets Inn public house, a Good Pub Guide entry. 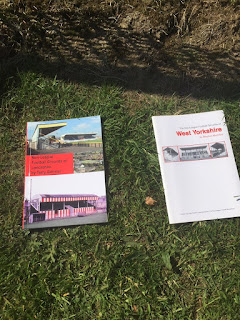 The ground is situated in the tranquil setting of Holbrook Hall. It's a bargain £3 for entry and car parking. Today's attendance of 212 turns out to be a club record. I take a wander up the far touchline of this beautiful tree-lined venue. Trestle tables are set out with Hoppers selling books, badges and programmes. I spot a couple of books on Non-League grounds in Lancashire and West Yorkshire and immediately snap them up. I strike up a conversation with the stallholder Mike Float (yes there's a joke in there somewhere, perhaps he's related to 'Milky' from Radford). Mike (not Milky) has upped sticks from the south and moved to Whitby, in North Yorkshire - I'm green with envy.

Linby Colliery Welfare are the visitors and play like they've been on the lash in Hucknall the night before. I'm fond of Linby as I spent three years working there at the colliery back in the 80s. Today they are on the end of a 5-2 tonking. 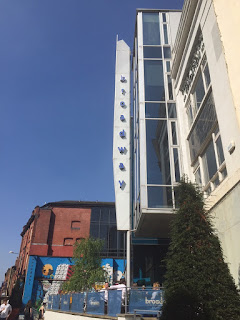 I'm back in the car and on the blower to Ms Moon. I'm avoiding Sincil Bank like the plague; my heart won't last for 90 minutes. It's a gorgeous day as we stroll around Nottingham's Creative Quarter in Hockley, before diving into Sexy Mamma's on Heathcoat Street, where we eat Al Fresco. I stay teetotal with my mind firmly fixed on 'The Lincoln' as we shell out £17 at the Nottingham Broadway Cinema kiosk to watch the critically acclaimed Funny Cow. Maxine Peake blows us away with an award-winning performance loosely-based on the life of northern female comedian Marti Caine, along with the prejudices and blatant racism of the 1970s.

We're half an hour into the film and the bloke behind me is already irritating the living daylights out of me by unwrapping his sweets and slurping his cola through a straw. I light up the whole cinema (it only has 40 seats) by checking Live Scores on my phone - Christ on a bike, cider-drinking Yeovil are 1-0 up at Sincil. 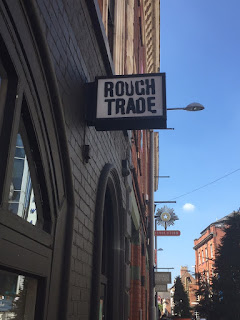 The film is gripping, sad, funny and dark - so is my mood. I lose signal and get the Apple 'wheel of misfortune.'  - it's an old -fashioned news blackout. It's 5:30pm the film has ended and I have no idea of the final score at Lincoln. I exchange pleasantries with a guy in the toilet (about the film) as Ms Moon hotfoots it down to Marks and Spencer to grab some tea. I enter the outside world on Broad Street, that's blessed with wall to wall sunshine and streaming with folk. I take a deep breath and fish my mobile from out of my pocket. A text comes through from my brother on his hols in Corfu. It simply says "we never make it easy do we?" I burst into tears, like I do now, writing this. Up the Imps xx

Man of the Match: Maxine Peake in Funny Cow.
Posted by Sticky at 7:56 PM 2 comments: