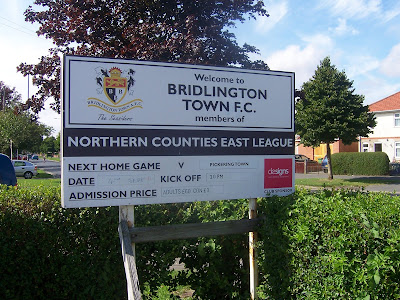 It’s 4am on Saturday morning. I’ve tossed and turned for most of the night. I feel like a little kid who can’t wait to see what presents Santa has brought for Christmas Day. If only I could get another hour’s shuteye.

I roll out of bed at 5am and jump into the shower. I bolt down a bowl of Cheerios and sink a strong cup of coffee. I start up the Rolls Royce and reverse up the steep drive: Whitby here we come! 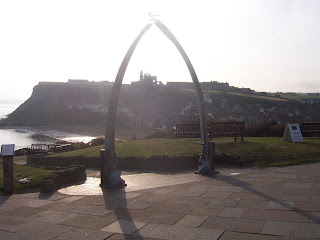 White Van Man and his pals are up in the picturesque North Yorkshire harbour town of Whitby. Sticky Palms has been invited up there to join them.

I go up the M1, M18 and A1. There’s a pea-souper of an early morning fog. I put the radio on search. It finds BBC Radio Sheffield. The DJ is way too chirpy for this time of the morning.

He mentions that today is ‘National Non-League Day.’ We’re also informed that the actor Sean Bean has been made a director of Central Midlands League team Handsworth FC. The guy then spoils it all by playing Mike and the Mechanics 1991 hit, ‘Over My Shoulder.’ It’s the song with that annoying passage of whistling half way through it. 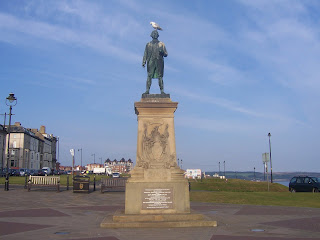 I park up in the West Cliff area of Whitby, next to some plush apartments that I used to stop at each autumn with my dad, Mrs P and the kids. I pause for thought and come over all emotional for a while.

I snap out of it and text the ‘Big Man’, but he’s still in his slumber at the Hotel Avalon in Royal Crescent. I head into the bustling town centre. The town clock strikes 8am. I peer through Jane’s Cafe and notice there’s some action in the kitchen. I’m the first customer of the day to sample a ‘full English.’ 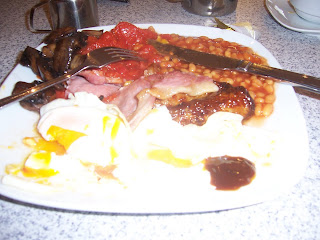 I walk through the nooks, crannies and cobbled streets of the old town. I summon the strength to climb up the 199 steps next to the delightful Duke of York pub. I stand adjacent to the abbey and admire the vista of the coastline towards Sandsend and the stunning view of the harbour.

I’ve arranged to meet White Van Man and the crew at the Arnold Palmer Crazy Golf. We’ve a tee-off time of 10.30am. I’m in the middle group. I roll back the years with a virtuoso display of putting. All that practising that me and Finley (pet rabbit) have put in on our concrete patio from dawn till dusk has paid dividends. 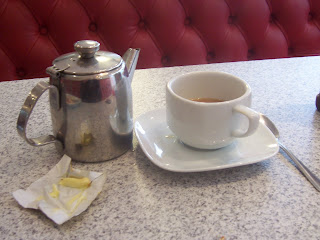 Crowds flock in from all over the cliff top as I finish the final few holes with consecutive birdies. I sit in the clubhouse with a score of twenty. I wait, with anticipation, for the presentation by the tour leader, Piers, (Harry Enfield) of the Claret Jug.

I notice a helicopter hovering in the clear blue sky, perhaps Ryder Cup captain Colin Montgomerie has flown in to check out my form.

I put a fingertip full of hair gel on my barnet, tuck in my t-shirt and remove my Nottinghamshire Outlaws baseball cap, as I wait for the closing ceremony. Suddenly news filters through that Sandra, in the group behind, needs a two on the final hole, to score 19. 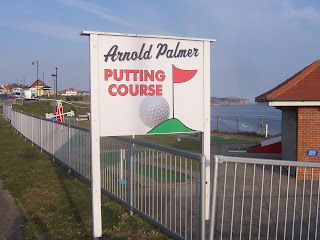 She rolls in a tricky six foot downhill putt in front of a crowded gallery to take the Whitby Crazy Golf Open Championship. I’m inconsolable. I walk to the back of the band stand to shed a few tears. I wish I’d brought Finley to caddy for me now.

We move on to the village of Ruswarp. We jump onto a miniature railway and pose for pictures. We amble up the road to the edge of the river bank. One or two of the gang hire rowing boats for half an hour or so. I had a mishap at Knaresborough a few years ago, so decline the offer of a ride down stream.

Jane’s ‘full English’ has caused quite a thirst, so WVM, Bruiser, Widdow and Grasshopper (it’s a new name that Suzy mistakenly called me earlier) trek up the hill to a café overlooking the river. 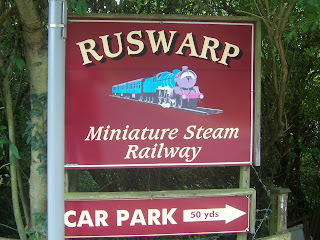 Bruiser suddenly has the urge to go to the loo. Unfortunately, the café owner explains that the toilets are flooded and that the nearest one is up the hill next to the mill, a five minute walk away.

Bruiser can’t hang on that long and takes a leak behind the car park, on what appears to be some scrubland. Unfortunately it’s a private dwelling and the owner’s eight year old daughter is playing hopscotch in the garden. 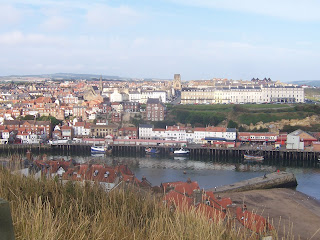 Bruiser gets a dressing down and a proper finger-wagging from dad, who storms up to the café to remonstrate with the owners over the flooded loo. He still has a face like thunder when he frog marches back down the hill. Bruiser sensibly cowers behind White Van Man. Dad looks like Geoff ‘Bullet’ Baxter, the PE teacher off Grange Hill.

We say goodbye to the group and go on the white knuckle ride on the A166 to Bridlington. WVM has been watching his Top Gear box set again. He weaves in and out of traffic, cutting folk up at will. 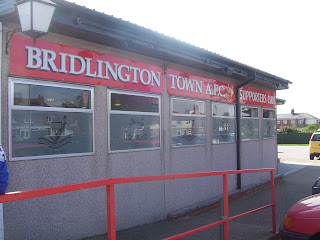 We’re parked up in Bridlington Town’s Queensgate car park within the hour. It’s been the death ride from hell. The Algarve sun tan has been replaced by a ghostly white complexion. 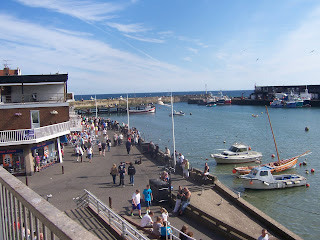 I get my own back and make the Big Man walk in his flip flops to the quayside. Bridlington is buzzing and is packed with day-trippers. I treat WVM to a sandwich and sausage roll at a local bakery.

We’re back to the ground well ahead of schedule. It would be rude not to visit the social club. Sticky has half a pint of cider; WVM has a can of Diet Coke. The Club is smart. It has a pool table, fruit machines, table football and a well stacked trophy cabinet. 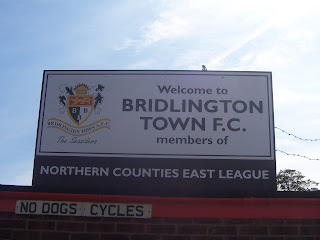 It’s £6 on the gate and £1.20 for a top notch programme. I love this club. They are up there with Cammell Laird as my favourites. I just know they will turn it on for me and the Big Man today. I’m hoping they will make Finley a mascot, one day.

Bridlington is a seaside resort and fishing port in The East Riding of Yorkshire. It has a population of just over 30,000 people. 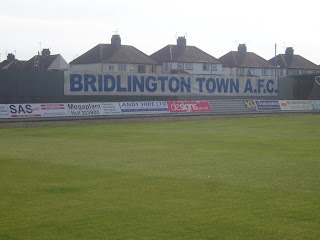 Bridlington were league champions last year, but for financial reasons they didn’t take up the offer of a place in Evo Stick Div One North.

We position ourselves to the right of the Brid dugout. I admire the captain of their ship, (coach, Gary Allanson). He has a calm exterior and is pro active with his coaching points.

A couple of my favourite players aren’t playing today – Ash Allanson (injured) and Frankie Belt, who has buggered off to close rivals Scarborough Athletic – I saw him score a cracker at Armthorpe Welfare at the fag end of last season. 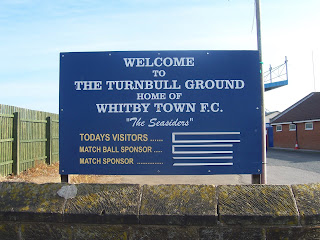 The teams come out of the tunnel to Dario G’s 1998 World Cup hit ‘Carnival De Paris. My spine tingles with excitement. £6 for this: what a bargain.

The day was never going to disappoint. Bridlington and Pickering play a smashing game. Brid open the scoring on 13 minutes through new signing Steve Lyon. Three minutes later the Pikes are back on level terms. Liam Salt knocking in a rebound after a point-blank save by the excellent Wilberforce.

Nicky McNamara has an aura about him. He bosses the midfield and spreads the ball. He puts his side 2-1 up on 27 minutes. 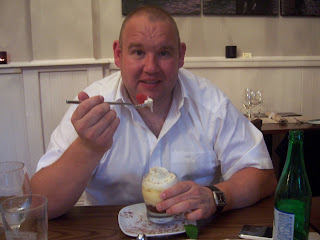 WVM happily plays on his i-Phone. He gets frequent updates from his pal at Meadow Lane, where today Notts County celebrate 100 years of playing there. The Pies are already 3-0 up.

It’s too hot for a cup of tea. We listen instead to West Yorkshire band Embrace, booming out the PA system.

Pickering up the tempo in the second half. Their diminutive 9 jacket, Georgie Rose, looks more suited to having a paper round or riding a horse in the 3.45pm race at Beverley, but boy can he play football. He hits a slide-rule pass to the brother of Fulham’s Premiership midfielder Jonathan Greening (Josh Greening), he glides past two Brid defenders and is about to pull the trigger when he is wiped out by ‘keeper Wilberforce. 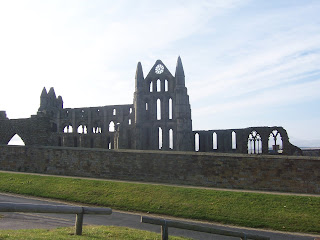 Pickering are absolutely superb – Salt holds the ball up and runs his socks off, midfielder Lyle Hillier plays with poise and style. They deserve another goal but reckon without the brilliance of Wilberforce.

WVM has spotted that the Pickering centre half can’t run or kick. He reminds him of former Notts County fat lad, Matt Redmile. He shanks a clearance out of play; it catches a bespectacled gentleman full in the face. The lense flies out of his specs and lands at Groundhopper’s feet a full 10 metres away. There’s not a mark on them. I apologetically hand them back to the badly shaken pensioner. 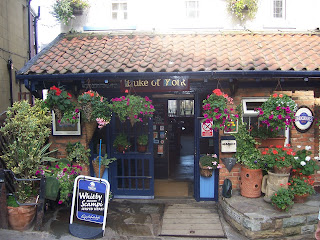 Against the run of play Bridlington Town score a goal that would grace the Premiership. Mc Namara smacks the ball into the net following a move of over a dozen passes.

Lyon completes a brace close to full time; it’s an unfair reflection on the game. Pickering have been terrific, as have the hosts.

WVM warms the car up, as I watch the closing moments. We listen to Sports Report. My old team Lincoln City have lost again. Bruiser is moaning that his calamares are overcooked. I notice he’s positioned himself close to the toilets to avoid a repeat performance of this morning.

White Van Man’s face lights up when his trifle is served up. He can’t half pick desserts, readers. 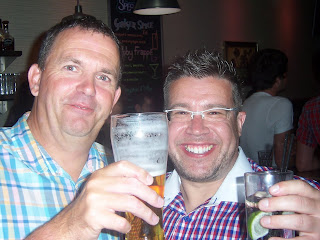 We’re on the Dracula Ghost Walk around darkened streets of Whitby. It’s another touch of genius that Harry Enfield has cooked up. The tour guide looks like Norris off Coronation Street. His tales are compelling. Groundhopper hangs on his every word.

A family from D***by are on the walk. They receive a chorus of boos from the sixteen strong Nottingham contingent.

I enjoy a couple of real ales, particularly the pint of Copper Dragon. ‘Come Live With Me’, by Heaven 17, is voted toon of the night at the Pier Inn. 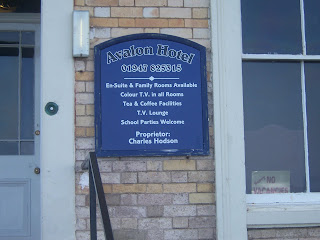 We end up in a pretentious cocktail bar. I watch the staff take an age chopping mint, lemons and oranges up, as they prepare the drinks. Steam comes out my ears as I queue for twenty minutes just for a pint.

Those pair of shirkers – White Van Man and Bruiser – make an early exit back to Guest House Paradiso. I’m shitting bricks. I’m in a single room and there’s a vampire on the loose.

I bail out at 1am. I’m talking gibberish, like Phil Mitchell does when he’s been on the sauce in the Queen Vic.

I tell you what Piers, you can’t half pick em son.

Man of the Match: Harry Enfield
Posted by Sticky at 1:20 PM