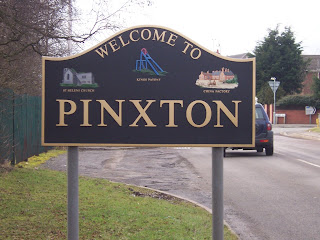 Finley Palmer (pet rabbit) is being a bad lad. He won’t go to bed at night, he’s off his food and water and keeps pulling his freshly laid bed of hay out of his crib and into his yard. I tackle Mrs P about the teenager’s petulant behaviour.

Her take on it is very simple: she thinks Finley has spotted the box of Trill budgie seed that’s kicking around the back door. The box of Trill she bought me as a gag for my birthday. Finley thinks he’s got competition if Murphy the budgie arrives on the scene. The cute little fella is attention-seeking. 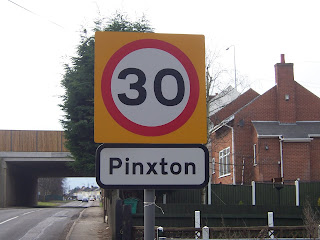 We have a heart to heart in his yard. I tell him that it’s unlikely that Murphy will be flying in for a while as Mrs P has put a block on it. It doesn’t half cheer the wee man up. We’re back on talking terms again; after all he is my best friend.

I ask him who he thinks will win the Central Midlands derby between Pinxton and Sutton on Saturday. “Dad, it has to be an away win banker”, my furry friend replies.

It’s Thursday evening. ‘The Skipper’ bursts through the kitchen door gasping for breath. The lazy so and so was chillaxing on the sofa, eating a custard cream, when he heard top totty Georgie Thompson pipe up on Sky Sports News that Notts County had been sold again. 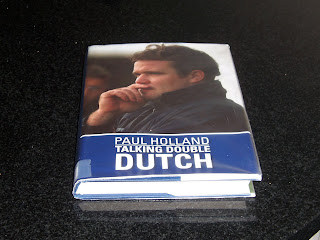 Silver-tongued spin doctor, Peter Trembling, has exited the club, as has director of football Sven-Goran Eriksson. Harts restaurant, World Service and Sat Bains will be laying off a chef or two, that’s for sure.

I’ve wiled away the evenings reading former Mansfield Town midfielder Paul Holland’s autobiography – ‘Talking Double Dutch.’ I remember seeing them down ‘The Lane’ the season they were relegated to the Conference, and thinking what a good passing side they were. His book is an interesting read. He had to retire from the professional game at the peak of his career, aged just 28 years old.

There’s been some bad feeling on the unofficial Central Midlands message board. Admin has threatened to close it down. I hope he has second thoughts as there are some good lads on there, with a passion for the game. 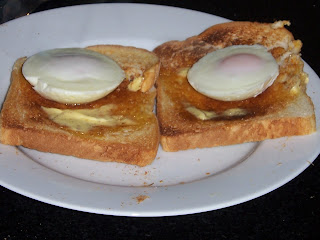 It’s an early start for The Groundhopper on Saturday morning. There’s just enough time to rustle up a couple of griddled eggs on toast. Eighty two year old Radio 2 disc jockey, Brian Matthew, spins the classic single ‘Creeque Alley’ from The Mamas and the Papas.

I charge the iPod up and give Sally Gunnell a quick wash. The kids have downloaded The Cheeky Girls onto my Pod. I’ll have the pair of wind-up scamsters in the office when I get back tonight.

I’m on the road at 9.15am. They used to say many years ago in north Notts that if you whistle down a mine shaft you’ll end up finding a fast bowler. I hoping the same applies for junior footballers in the old mining villages of Pinxton, Selston and South Normanton. 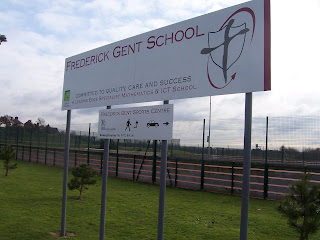 Danny Baker’s superb radio phone-in is on Five Live as I drive up the M1. He’s talking about the time Hollywood actress Elizabeth Taylor came into his dad’s Rotherhithe newsagents and bought a packet of Rothmans cigarettes.

I exit at Junction 28 and drive up into South Normanton. I park up in the Frederick Gent School. I immediately spot a boy with potential. He’s lazy, lacks discipline and has a bad attitude, but when he’s on the ball he is poetry in motion. He’ll do for me.

I’m meant to be up at Selston for another game but time has flown and so has blood, following a collision of heads between two brave young players. 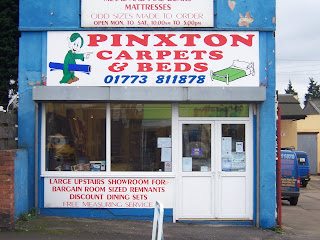 I’ve got to be at Kirkby-in-Ashfield’s Summit Centre for a 1pm kick-off. I’ve time on my hands, so decide to pop into Tesco Express for a spot of lunch. I grab a ham and smoked cheddar sandwich, a packet of salt and vinegar Disco crisps and a can of Pepsi Max.

I see three men hunched over the card section. Christ on a bike, I’ve just remembered, tomorrow is Valentines Day. Four blokes line up in a queue at the tills in Kirkby-in-Ashfield with a bunch of flowers in one hand and a Valentines card in the other – it just doesn’t seem right to me in this tough old mining town.

I enjoy my working lunch sat in the car. Chelsea are playing Cardiff City in the FA Cup. There’s a minute’s silence for former goalkeeper, the Serbian, Peter Borota, who died yesterday. He was only 56 years old. The ‘prawn sandwich’ brigade will not have heard of him. 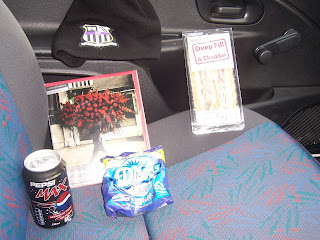 I drive up to the Summit Centre, the home of Kirkby Town FC. I saw a cracking game of football here a few months ago, when they beat League leaders Louth Town 3-2.

I meet up with a guy who used to work at Mansfield Town. He tips me a few good young uns to keep my eye on.

I’m back up at Pinxton by 2.30pm, driving around the deserted streets. It’s a no-thrills former pit village with two boarded up pubs. I turn right at the Aquatic Centre and park outside Pinxton Miners Welfare Social Club. 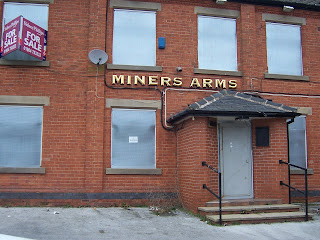 I had every intention of popping in the Welfare but I have to field a few calls. It’s 2.55pm when I walk through the gate. It’s £2 admission. They also issue a programme priced at £1. I like the ‘meet the players’ section. One or two nicknames tickle me: Steven Darcy is called ‘Tip Ex’ and Ben Bacon is known as ‘Unit.’

There’s an article in the programme from a well known groundhopper called Osborne. He recalls his day out at Southport’s Haig Avenue when Ilkeston Town were the visitors back in November.

Pinxton is a village in the eastern boundary of Derbyshire in the Bolsover district. It has a population of just under 8000 people. Sporting folk from this area include: former cricketer and footballer Arthur Jepson and jump jockey Steve Smith-Eccles. 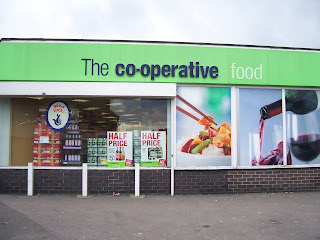 The latter pulled our betting syndicate out of a big hole one year on Gold Cup day at Cheltenham. Sticky stuck a tenner each way on Nicky Henderson trained Thumbs Up at 16/1 to bring the bacon home. Stevie Smith-Eccles drove her home up the famous old hill.

Sutton Town AFC are in a rich vein of form and are on a long unbeaten run. They stuck six goals past shell-shocked neighbours Kirkby Town last week; on their manor too.

There’s controversy in the opening moments when Pinxton’s ‘keeper collides with the Snipes’ forward. It’s a clumsy rather than a malicious challenge. The poor young ‘keeper can barely walk. 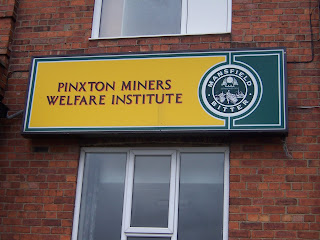 Sutton soon take the lead. Cam plays a reverse pass to the athletic Carlos Forbes, who’s wandering on the right wing. He hits a daisy-cutter of a shot across the face of goal, into the corner of the net. The Snipes play with confidence.

Pinxton look to feed their left winger who has the sweetest left foot and a dangerous cross on him. But the huge Sutton 5 jacket misses very little in the air.

I’m sat at the top of a grass bank on a wooden bench. Behind me some youngsters play a game of football with jumpers for goalposts. ‘Vidic’ goes straight through the back of ‘Malouda’, Groundhopper awards a penalty. 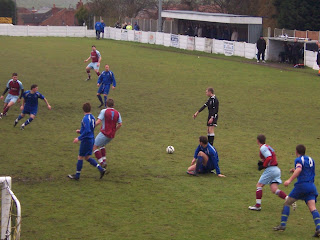 At the break I share a hot drink with one of the scouts I used to work with at the Forest academy. The Tricky Trees are losing at Doncaster’s Keepmoat Stadium. Mrs P phones in. She’s snapped up the last Marks and Spencer’s chicken and bacon pizza off the shelf. Yippee, it’s Sticky’s favourite.

I’m that busy gassing, that I’ve forgot to pop into the Welfare. The Forest scout describes it as a time warp. They even have a cigarette machine in the toilet, he remarks.

Pinxton pick up the pace in the second period, but no-one can get on the end of their left winger’s crosses. They waste a few opportunities too. Both sides play a decent game of football but struggle in the final third. 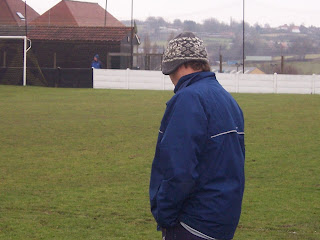 With minutes left, and the home side down to ten men, ‘Carlos’ beats the offside trap but is wiped out by old hop along in the Pinxton nets. Cam smashes the penalty into the roof of the net.

Pinxton play with bags of desire and character but don’t quite have the quality to open up the Snipes’ defence.

Man of the Match: Malouda.
Posted by Sticky at 5:59 PM

The variety, the quality and the charm of it all is simply superb.

You clearly wouldn't get very far on Master Chef Groundhopper. Those look like coddled eggs to me. I believe griddling involves frying in a pan with ridges on.