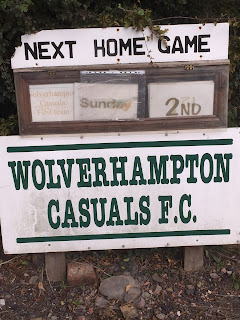 I'm as pleased as punch on Sunday morning, the battered old dust-infested shoe-rack at the foot of the staircase has had a Sticky and Murphy the budgie make-over. Ms Moon has more footwear than Imelda Marcos (wife of ex-Philippine president). Murphy beavers away, vacuuming all the dust up from behind the rack with his beak, Sticky Palms fills up bin liner after bin liner full of old welly bobs, scuffed shoes and manky old boots. Ms Moon will be chuffed to bits when she returns from Poundland.

Jesus wept, Murph and I are proper in the doghouse. We didn't know that the Hunter wellington boots and UGGS, that we've lobbed out and that are now sitting in a skip at the tip, were worth more than the takings of Robbie Williams new single (£400) - they wouldn't have made it on 'Flog It.' We've had the hairdryer treatment off the 'Princess.' X-Factor is watched in stony silence. Murphy normally whistles along to 'Motown Night' - even he keeps his head down.

I slope off into town for a few jars on Sunday lunchtime - Murphy is told to lie low as Ms Moon is still seething about 'Shoegate.' I have a quick Scoop at the Hop Merchant - the artist formerly known as the Turf Tavern - on Nottingham's Upper Parliament Street. I slip into Copper City across the road for a nice pint of Ghost Rider. I notice they are advertising Storytellers: An Afternoon With Andy McNab, on October 29th. I'd have liked to have attended this, but we'll be in St Neots at a United Counties League top of the table clash. 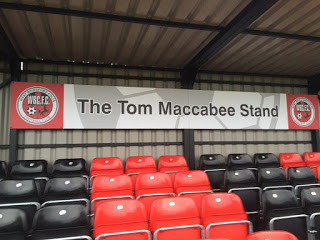 It's Tuesday evening and I'm sat in the Gamston Lock, a short drive away from West Bridgford's Regatta Way ground. White Van Man mops up a 10 oz gammon steak with ultimate ease, as The Taxman and Sticky labour over a beef 'n ale pie. I'm full of cold and have a throat infection. I shouldn't really be here, but have been slowly going stir crazy working from home.

The game tonight is a cup tie, with South Normanton Athletic the visitors. We bump into a groundhopper from Wiltshire, who is highly entertaining. We both tip one another a few grounds to visit. I really want my bed now, South Normanton are leading 1-0 with 30 seconds remaining. The Taxman and I have a history of cup tie extra-time games at numerous grounds in our county. The inevitable equaliser is bundled over the line with seconds remaining. 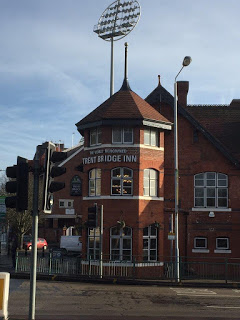 I phone up Ms Moon to say I'm going to be late back. I can hear Murphy whistling away in the background, blissfully unaware that the Canaries of Norwich have blown a two goal lead at Craven Cottage. We endure a further 30 minutes, witnessing a missed penalty, a sending off and two further goals, resulting in a replay. It was good to catch up with Butters and Dringy too.

The lurgy gets the better of me on Thursday - I even miss my Mindfulness and Meditation class. I stroll along the banks of the Trent on Friday tea-time, before hooking up with Ms Moon at the Trent Bridge Inn. Murphy and I are in bits for most of the evening, as poor old Kym Marsh gives a TV Times gong piece of acting, on the Rovers Return staircase, that will live long in the memory, following a breach of the Highway Code from David Platt on the cobbled streets of Weatherfield.

Murphy and I avoid the shoe rack and tip on Saturday morning. I spend the majority of it in the kitchen listening to the Danny Baker Show and Fighting Talk, whilst knocking up a chilli. Bournemouth v Tottenham are kicking off on Five Live as we head off to Wolverhampton. 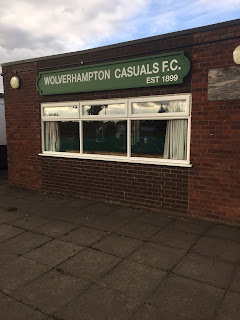 Paul Gambacinni is playing some cracking tunes on his Pick of the Pops show on Radio 2. His attention turns to 1988, when he plays a song by the German World Miming Champions, Milli Vanilli, called 'Girl You Know It's True.' The lyrics reduce me to tears - Murphy and I could have written the words to this 'song' when we cleared out the shoe rack the other week. There's a drop your bacon sandwich moment in the car when Ms Moon coughs up she bought their double album on cassette - I ask to be dropped off on the hard shoulder so I can hitchhike to the ground.

We avoid the M6 Toll and stick to the A5 and A460. It's like a scene from Emmerdale Farm as cows are herded up a country lane, with a tractor in tow, full of manure, before we take a right hand turn into the ground. 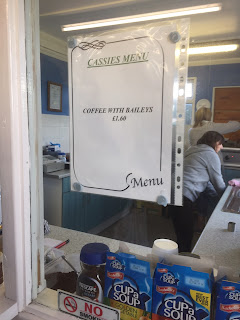 Wolverhampton is a city with a population of 250,000 people. It was once famous for mining coal, iron ore and limestone. The first set of automatic traffic lights were trialled in the city in 1927. Celebrity folk born in Wolverhampton include: England football coach Don Howe and the singer Beverley Knight. It is also home to the following bands: Slade, Cornershop, The Mighty Lemon Drops and Babylon Zoo.

I leave Ms Moon to put some 'lippy' on and listen to 'Gambers' spinning the hits from 1988. The pictures I've seen of Brinsford Stadium, on the Net, don't do it justice. It's without doubt the coolest ground we've been to this season. 'Rock the Casbah' by The Clash is booming out the PA as I admire the tree-lined surroundings and immaculate playing surface. Coffee and Bailey's is on offer at £1.60 a cup. 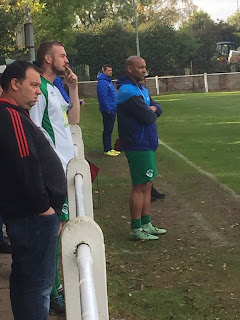 I get chinwagging to a guy sat in the stands. He's played for and watched this team for over 50 years. I clock Ms Moon chatting to the young ref who must be 6' 4" -  she can't arf pick em.  We stroll across to the far side and position ourselves to the right of the home dugout.

The DJ is still churning out the toons - 'Lip Up Fatty' by Bad Manners is the pick of the bunch. Chelmsley Town are the visitors. Watford striker Troy Deeney was born in Chelmsley Heath and played for their youth team before being picked up by Walsall. He was subject to a £25 million bid by Leicester in the summer. 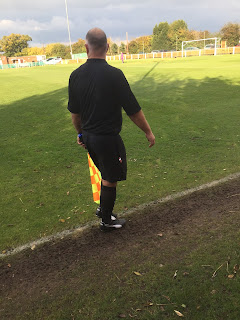 Chelmsley kick down the slope, they have more energy and ideas than Casuals - 6 jacket is outstanding. A home team sub sucks on a cigar adjacent to the dugout - he strokes his beard as he exhales. He's reminiscent of a young Fidel Castro. The visitors open the scoring just before the break.

The music from the PA doesn't reach the dizzy heights of pre-match, although we're treated to Wonderwall by Oasis. I strike up a conversation with a lovely guy called 'Daz' who knows the local scene like the back of his hand - he has years of experience in men's and women's football in the Black Country. Daz is confident of victory despite a poor show in the first half. 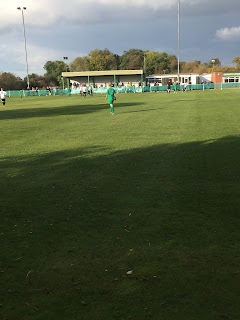 The game is littered with petty fouls and yellow cards. The poor old Ref has little option but to brandish cards with the 'Match Observer' and his sharpening pencil in the stand. Casuals restore parity with a goal by 10 jacket. The game looks to be petering out, with another extra-time beckoning. With seconds remaining Casuals centre half seizes upon a loose ball to fire home the winner.

Daz is ecstatic, he fist pumps the chilly fresh air. The guy just loves the game. There's no bad-mouthing officials, or querying decisions. He's totally immersed in the beautiful game. Unlike a couple of visiting supporters who at the end of the game hurl abuse at Ms Moon's 'toyboy' - calling him a 'pencil-necked p***k.' Oh deary me.