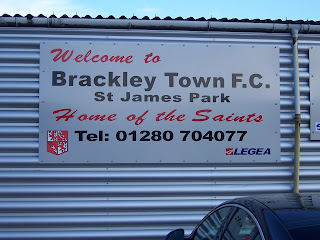 The crowd are pouring out of Villa Park. The Groundhopper is gutted not to have seen a goal. I’m getting hammered with texts from White Van Man: “£43 for a 0-0 son.” I’ve proper got the face on; the game needed a goal.

A guy’s got a radio on. There’s late drama at Old Trafford. Rooney’s come up trumps again in ‘Fergie time.’ I really wanted to watch that game. I don’t do nil nils. It’s the only thing in life that really cheeses me off, well apart from Wild At Heart.

I walk past a poster advertising Sleeping Beauty at the Birmingham Hippodrome, starring Joe Pasquale and X-Factor runner-up Ray Quinn (who?) Oh well, it could have been worse folks. 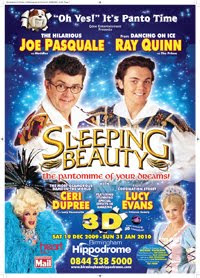 It takes an age to exit the Powerleague car park. There are bloody roadworks on the M6. It takes an hour to crawl through them. There’s not a workman in sight.

‘The Guvnor’s’ radio is on the blink. We’re spared that clown ‘Spoony’ on 606. The closet Cockney Scouse fool is still in Dubai on his jollies. Junction 9 on the M42 is closed. What a night this is turning out to be.

A tired old Sticky Palms staggers through the front door close to 1am. I’m never going to Birmingham again. 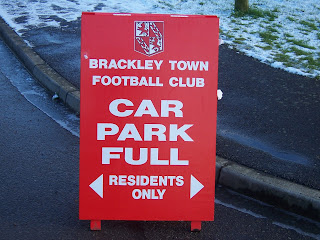 I spend Friday night touching up the blog and seek solace in a bottle of Bombay Sapphire gin.

It’s Saturday morning. We wake up to a frost-covered lawn. I was keeping the scouting local this morning but I doubt that there will much on.

I throw a couple of old doors into the back of the ‘Rolls Royce’ and head down to West Bridgford Recycling Centre. I call in at West Park on my way home. I fight my way through the parked-up 4x4s, Mercs and BMWs. I watch three games. There’s nothing doing.

I’m worried about the weather. Snow is dotted around the country. Tomorrow morning I’m meant to be in Sleaford – I think I’ll give it a miss. 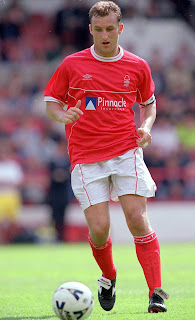 I get a text off ‘The Reaper.’ He’s across at Leamington Spa buying a bathroom cabinet off former Nottingham Forest captain, Riccardo Scimeca. He says he’s a ‘lovely bloke.’

I drive home. I give Finley’s crib a spruce up. I have three chews in my hand. He takes the middle one first – it means he’s predicting a score draw in today’s game.

I call up Brackley Town. They’ve had a dusting of snow overnight. They’ve gritted all the hard-standing areas and cleared the pitch of snow. The referee from the Northampton Town v Burton Albion gives the game the green light. 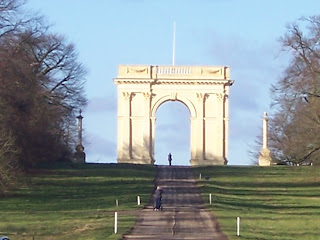 Both my lads are playing football today. I wish them luck, say goodbye to Mrs P and head out the door. It’s 11.30am.

I’m tooting my horn outside Trumpy’s house minutes later. It’s a familiar routine. He staggers round the corner. His striped shirt hangs outside his blue tracksuit bottoms. The plastic carrier bag has a litre of cider nestling in the bottom of it.

Trumpy has had a busy morning, arranging for a skip to dispose of all his empties. He still manages to cram in a couple of McEwans, half a cider and a slice of toast – he admits the toast was a slight distraction. 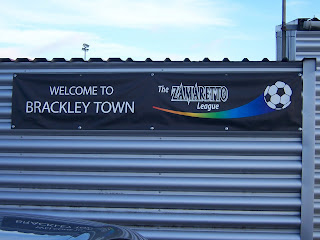 Trumpy rings Rocester FC as a plan B but manages to ring the wrong number and spends five minutes talking to a little old dear who probably hasn’t seen anybody since the home help came yesterday.

As we sail down the M1 and up the A43, Trumpy treats me to endless anecdotes of his week away in ‘Bonnie Scotland’ at Yuletide. There was four foot of snow in Aviemore. The legend was well prepared though, with his plastic bag and pair of trainers.

He saw the New Year in with bagpipes and fireworks in the town centre. He’s normally in bed snoring his way through Jools Holland after a twelve hour bender. 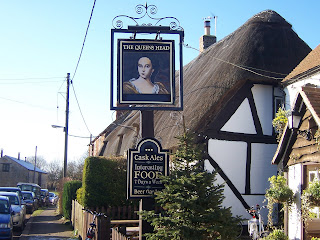 Readers from Brackley and Didcot will be unaware that Trumpy’s sole aim in life is to make a financial transaction in every village, town and city in England, Wales and Scotland. With this in mind we stop off at a delightful village pub in Chackmore called the Queens Head.

The lounge is thriving. The room has low beams and stone floors. Trumpy orders fish ‘n’ chips and real ale. The Groundhopper opts for a chicken, brie and avocado baguette, washed down with a Stella. The legend also has a pint of Stowford Press cider. He enquires with the barmaid how much the homemade jars of chutney and pickles are. 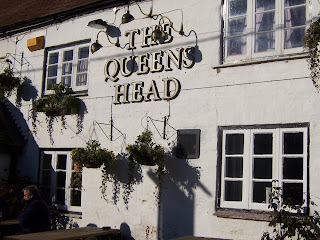 We drive towards Brackley, past the delightful setting of Stowe School. We hit the icy, snow-covered country lanes. Luckily we are in the ‘Rolls Royce.’ We are in Brackley an hour before kick-off.

Brackley is a market town in south Northamptonshire with a population of 15,000. It is close to the Silverstone race track. German motoring giant Mercedes have bought a controlling stake in the Brackley based Formula One championship team Brawn GP.

Trumpy is disappointed when we arrive at Brackley Town’s St James’ Park – he thought he was going to Newcastle United. We park on the main road a few minutes’ walk away from the ground. 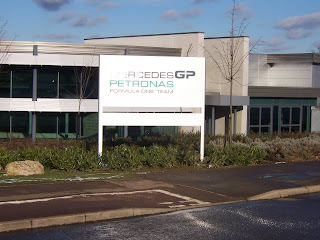 Brackley are second in the Zamaretto Premier League, whilst the visitors, Didcot, lie just above the relegation zone. It’s a brave call by Finley to predict a score draw.

Trumpy has already sniffed out the bar. It would be in my top five in the last three years of groundhopping. He shouts up a Theakstons bitter, Sticky has a Kronenberg 1664 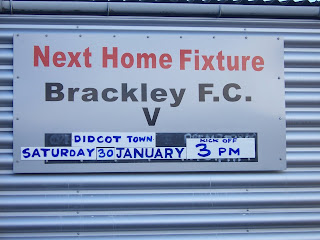 I’ve just come back from the loo to find Trumpy with his fists raised, doing a little jig. D***y have beaten the Tricky Trees at the ‘Sheep Dip.’

The game has kicked off. The volunteers have done a cracking job making the ground safe. There’s an ice-cold chill. Trumpy is already having a little moan about it. 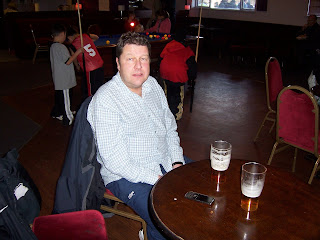 The Saints take the lead after 15 minutes. Ben Mackey curls in a ball across the face of the goal; it’s headed home by Owen Storey, who’s lurking at the far post.

Brackley enjoy a spell of pressure and have further chances to increase their lead through ex Southend United striker Mark Rawle and Mackey.

Didcot regroup and get themselves back in the game on 34 minutes with Michael Alexis bundling the ball home from close range. There’s a huge cheer; they’ve brought a decent following. 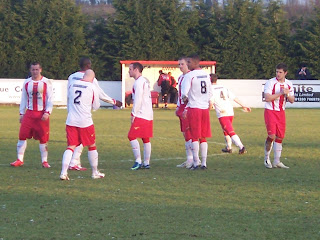 I’ve not always been impressed with the quality of players on my trips to the south Midlands but these two teams are not the norm. Banbury and Bedford were bloody awful when we saw them a few months ago.

Trumpy’s happy now he’s back in the bar. He celebrates with another pint of Theakstons. The half-times are coming through. The Pies are beating Barnet 2-0.

I leave Trumpy to finish his drink and go and watch the second half. Phil John is running the show for the Railwaymen. He has high energy levels and quick feet. He gets his head on an inswinging free-kick to put Didcot 2-1 up. 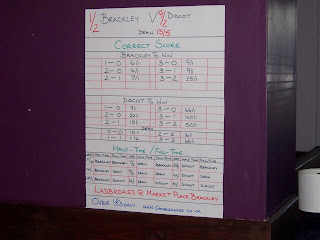 Trumpy’s hooked up with the Didcot posse. One of them gets a text alert letting him know that Wolves have equalised at Hull City. “Are you from Wolverhampton?” asks Trumpy. “Yeah” replies the guy. “It’s a sh**hole announces the legend. Oh dear thinks The Groundhopper.

The Saints are stung into action. Didcot’s centre half has limped off the pitch. Their defence is under the cosh. Didcot’s Aussie keeper, 24 year old Matt Trott, is performing miracles. He tips one over from Rawle but is finally beaten on 80 minutes with a fine turn and shot from Ben Mackey.

It’s a grandstand finish. Trumpy returns from his final pint of the day to witness an astonishing display of goalkeeping from ‘Rolf Harris.’ He’s punching, diving and kicking his side towards a point. 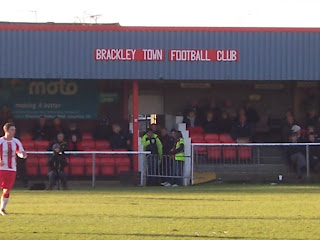 Trumpy applauds the ‘keeper and shakes the hands of a few Didcot fans and their children. He’ll have the freedom of the town when we visit the Oxfordshire club next season, for him to chalk a pub off and for me to tick the ground off.

Man of the Match: Mark Bosnich.
Posted by Sticky at 7:32 PM

Another great young aussi talent the A league has lost

Trumpy "with his plastic bag and a pair of trainers".

Vintage non-league Wordsworth, straight from the cask.......doubtless Trumpy would appreciate that?