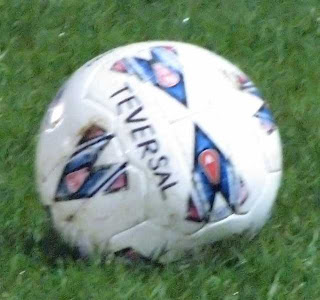 There’s been little sign of White Van Man over recent weeks. I’ve missed his booming voice and big personality. He likes his midweek diet of Champions League football and buckets of popcorn. He works alternative weekends for the Tricky Trees. We’ve pencilled in, on Nov 1st, Spalding v Shepshed. I eagerly await this rendezvous; something will crack off that day, it always does.

The Taxman gets the green light at 6.30pm. He toots his horn, outside ours, ten minutes later. It’s like Oliver Hardy calling for Stan Laurel. 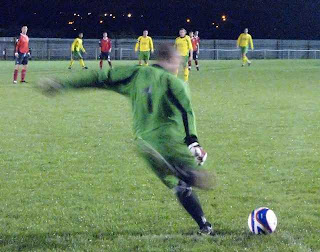 We’re on the bloomin Nottingham ring road again. We avoid the M1 like the Dubonic Plague. We turn left off the A60, just past the old Berni Inn, called The Hutt Restaurant.

It’s a filthy, cold, miserable old night. The rain pelts down, ricocheting off The Taxman’s windscreen. We pass Coxmoor Golf Club and the Sherwood Observatory. We have the interior light on as Sticky Palms squints at directions printed off the superlative Teversal FC website.

We drive up through Skegby and Stanton Hill, and down into Teversal village. We’re close to Silverhill Colliery, where I had an interview for a post over twenty years ago. 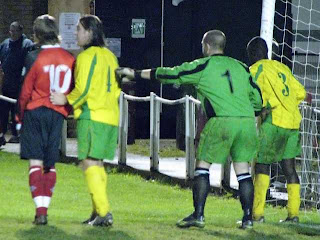 It’s £4 each entrance money. The programme is £1 and a brilliant effort. I’m already in love with this club and ground.

I bump into Tevie secretary Kev Newton. I scouted his son for ‘The Pies’ a few years ago. We exchange a few words and have a quick catch up. Kev is busy on the PA system. He invites us into the sponsors’ lounge for sandwiches and drinks at the break. It’s a wonderful touch.

We have a quick tour of the clubhouse and bar; there’s a nice feel to the place. There’s a team sheet pinned up on the wall, with tonight’s line-ups. Not many clubs do that! I scribble down the changes in the programme. 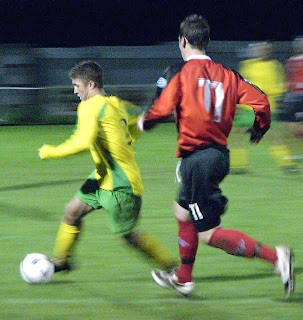 Some old boys sit in the corner; they’re cranking themselves up for the ‘thrilling’ encounter between Denmark’s Aalborg and ‘United.’

We walk around the back of the goal, through a posse of grumpy old men, and take our view from around the edge of the eighteen yard area. The rain drives down from the darkened skies. It’s a perfect night for the beautiful game.

Teversal FC play at Carnarvon Street and were originally formed in 1918. They play their football in the Northern Counties Eastern League Division One, and currently lie 7th. 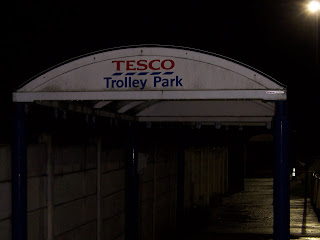 Greenwood Meadows are from inner city Nottingham and currently top the newly formed East Midlands Counties League. Management pair, Mark Connors and Neville Silcock, know their onions and have recruited wisely. I saw them a year ago at Heanor Town; they were shambolic. I’ve always had a soft spot for them, and they wear a kit to die for. The squad that has been assembled is a mixture of experience and youth. Tonight I fancy their chances, and so do they.

Teversal begin the game the more confident. They look to find target man Andy Woodcock early. He’s well supported by the midfield. Greenwood get the ball into wide areas and deliver probing balls into the box, which nobody is on the end of. 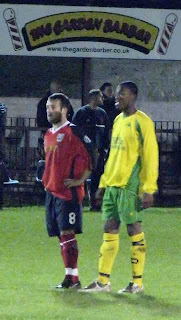 I recognise the Greenwood sub warming up; it’s 17 year old Craig Meakin. Three years ago, whilst at ‘The Pies’ someone tipped me off about him. He was playing for a bunch of scallywags called Wilford Mavericks. I pursued him for three consecutive Saturday afternoons and finally plucked up the courage to bring him in on trial. He has a swagger about him. At Notts he used to have his collar up, shirt hanging out and socks rolled down: that’s what I liked about him. We have a chat whilst he warms up. He has the look of a footballer, and not a hair out of place.

Tevvy take the lead on 38 minutes. Atkins keep the ball in on the far touchline and floats a cross in from at tight angle, Woodcock rises above the defender and heads the ball back in the direction it came from. It loops over ‘keeper Preece and into the top corner of the goal. 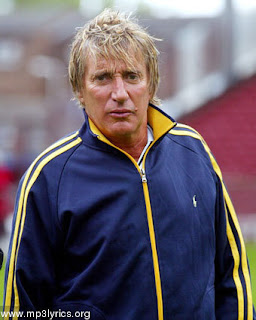 It’s my third year of groundhopping and I’ve yet to win a raffle; tonight I miss out by three numbers. Roland Gift ‘Drives Me Crazy’ during the break. We have a stroll around the ground; Tesco's have kindly donated a couple of old trolley stations that act as a cover from the rain.

Greenwood Meadows are full of beans and grab hold of the game in the second period. They play with pace and passion. Their coach Silcock is loving it and encouraging it, with valid coaching points. He has a mullet like Rod Stewart. If only they had a striker. ‘Fish’ is playing up front, but he couldn’t hit a cow’s arse with a banjo. He is more like a fish out of water. He bagged two at the weekend; it must have been a misprint. He’s taller than Peter Crouch and doesn’t win a header all night.

Meakin is finally sent on, and plays in an unfamiliar left hand side role. Meadows immediately score but Meakin is cruelly flagged. offside. Five minutes later he dances down the wing, mugging the full back, he now has his back to goal and spins the defender. He lays the ball back for ‘Fish’ who hits it out of the ground from all of seven yards. Doh! 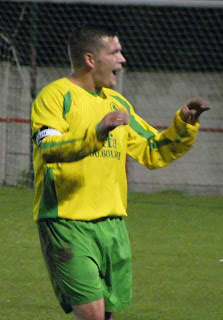 Stephens and Corah have been magnificent for Greenwood. The former strikes the upright; the ball cruelly flashes across the goal. Corah is subbed after a dreadful challenge.

It’s extra time again; we’re going to miss out on a pint again, just like we did at Ollerton a few weeks ago.

Teversal are strong now. The Greenwood Meadows stronghold midfield has been disbanded. Dalton Stephens has run himself into the ground and is suffering from cramp. He’s dispatched onto the wing, out of the way, but the ball inevitably keeps following him. 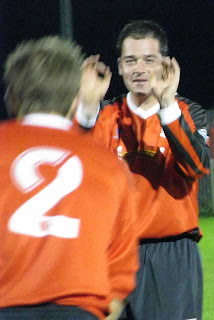 Meadows ‘keeper Preece keeps his side in the game with a string of fine saves, safe handling and brave goalkeeping. Teversal finish as they started, the stronger.

It’s easy to tell who will win the shootout. Meadows sing, dance and cheer at every penalty. Tevie look nervous, almost disinterested.

Super sub Ashley Whitt drives home a deserved winner; there’s a massive pile on, the sort of thing you see in the school playground.

Greenwood play with a spirit and desire. Connors and Silcock have them organised. I wouldn’t have said that a year ago.

Man of the Match: Josh Preece

Keith, thanks for the photos.
Posted by Sticky at 8:21 PM

has number 8 in the red shirt only got one leg?

Yes, it appears teams nowadays have to take account of the governments legislation introduced in 2004 under the disability discrimination act.