We’ve had a week in north Devon and I’ve had my fill of full English breakfasts, cream teas and fish n chips. We’ve played beach cricket and cards at night. It’s been a lovely family holiday. I had wanted to check out Barnstaple Town FC and had even got the resident drunk in the Inn on the Square public house to give me directions. Sadly even I hadn’t the bottle to disrupt my time with the family.

Mrs P and I are strolling by the sea shore, hand in hand, at Putsborough Sands. Surfers ride the huge waves. The sun glistens on the crystal clear waters. We have decided to travel back tonight, a day early, as the forecast is for heavy rain tomorrow and I don’t fancy the M5 on a Saturday.

I’ve been meaning to broach the subject of football for most of the week but haven’t quite plucked up the courage. The setting is perfect. I look into her eyes and say: “Is it ok if I go to Holwell Sports FC on Saturday and Forest on Sunday?” It‘s a long, silent 250 mile drive north on Friday night. 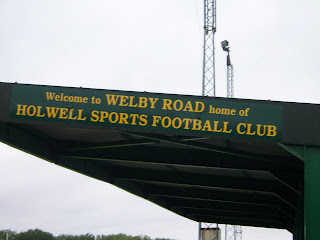 White Van Man can not get his fat arse out of bed today and The Taxman is on holiday in Worthing. The Nuclear Scientist fancies a run out though and I pick him up at 1.30pm.

It’s a short trip today; just the ten miles. We stop off at the recently refurbished Sugar Loaf Inn at Ad Kettleby. The famous grey racehorse and Gold Cup winner Desert Orchid lived in this village for many years. It’s a pint of Bass for Sticky Palms and a Black Sheep for NS. And very nice it is too.

Just down the road is Wartnaby. They have a lovely cricket ground there where former British Airways chairman Lord King lives. I used to play for a travelling cricket side many moons ago. We played Lord King’s X1 every season. Lord King used to donate a bottle of wine from his cellar for a raffle at tea. Oh, happy days. 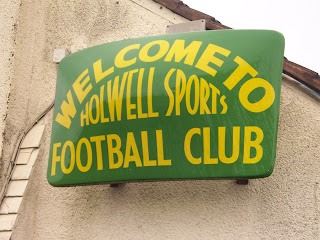 The Nuclear Scientist is telling me of his last trip to Melton Mowbray. He bought a showroom demo plasma TV from Radio Rentals at a heavily reduced price. He’s grinning like a Cheshire cat and is very proud of his bargain.

Melton Mowbray is in north-east Leicestershire and has a population of 25,000. Famous people from the town include Monty Python star Graham Chapman and Forest winger Paul Anderson. It’s the home of the pork pie. White Van Man once applied for a job there as a pork pie taster.

Stilton cheese is made down the road at Long Clawson. Pedigree Pet Foods are a major employer in the town; The Angler used to fish for them. Sticky Palms scored a rare header there for the British Geological Society back in 1987 during a Sunday morning 4-0 romp. I’m hoping to blog Nottingham Racecourse one day as I bagged a brace there too. 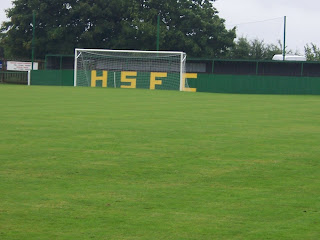 Asfordby Mine was a ‘Superpit’ opened in the 1980s just down the road from here. It was plagued with geological problems and closed in 1997.

The Holwell Works is just down the road from the ground. At its peak it used to employ around 1500 people. There are only a few hundred there now. It’s an ironworks that mainly manufacturers manhole covers.

Holywell Sports were formed in 1904. This season they are to play in the newly formed East Midlands Counties League. They will be up against the likes of Gedling MW, Gedling Town and Dunkirk. It’s a good standard.

The ground is outstanding for this level of football. There’s a little wooden hut where you pay the £2 admission fee. There’s no programme or team sheet as it’s only a friendly. 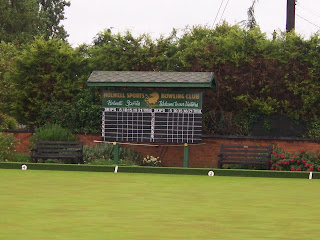 As we walk through the gate I can hear the worst song I’ve ever heard on the non-league circuit: 'I’m Having the Time of my Life' by Bill Medley and Jennifer Warnes. Thankfully we are not put off by this woeful tune.

Holwell play in similar colours to Norwich City. There are touches of green and canary yellow all over the ground. The rail which runs around the perimeter of the pitch is painted green.

Huntingdon Town, from Cambridgeshire, are today’s visitors. They finished 4th in Division 1 of the United Counties League last season. Oliver Cromwell was born in the town. Former Prime Minister and serial coal mine shutter John Major was MP for the area for many years.

We’re having a chat with one of the home supporters; he’s explaining that quite a few Holwell players are on the razzle in Greece. Despite this they still beat Sleaford Town easily in a friendly earlier this week. He tells me to keep an eye on Holwell’s number nine, who’s called Scott. 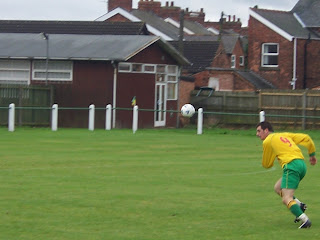 The teams trot out five minutes late. The visitors look fresh faced and young. There’s a strong cross wind but thankfully the rain has subsided.

I get my first touch of the match ball in the first minute and another one after two minutes. Holwell begin the game at a good tempo and have a well taken goal ruled out for offside.

Huntingdon take the lead on the half hour. An excellent cross from 7 jacket is bundled home by number 10.

The cup of tea would enter the hall of fame. It’s poured from the pot into China mugs; we mark it with a nine. The staff are friendly and The Nuclear Scientist has his eye on a ‘Rooster Burger.’

At the break we take a saunter out of the ground to visit The Stute Sports and Social Club. En-route we pass the wooden hut where we paid to get in. There’s a TV on and a remote control lying on a table. I press 319 and I’m disappointed to learn that my team Lincoln City are 1-0 down at the Don Valley Stadium against crisis club Rotherham United. 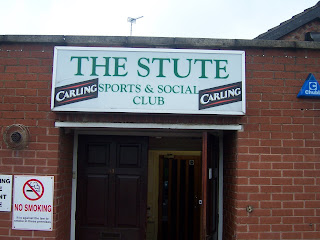 NS has a pint of mild and Sticky Palms half a Stella. We are entertained by the resident drunk, who gives us a detailed history of the Holwell Works.

NS was a bit slow downing his mild and by the time we return to the ground Huntingdon are already two to the good.

They call Holwell’s number nine ‘Rooney’ God knows why as he is more Mickey than Wayne. He’s frustrated with the poor service in the first half and has spurned a couple of chances. He rolls around at every opportunity, holding an injured arm, leg, head or whatever part of his anatomy comes into contact with an opposing defender.

Meanwhile the Huntingdon 7 jacket is coming into his own. He creates another goal for number 10 with a fine cross, which is finished sublimely. The goal of the game comes 10 minutes from time. 7 jacket picks the ball up 30 yards out with his back to goal, he turns on a sixpence, pokes the ball round an ageing and tiring defender, meets it the other side and smashes a low hard drive into the bottom corner of the net. It was worth a tenner, never mind two quid.

I flick on the Ceefax as we exit the ground; both Lincoln and Notts County have been beaten. I’m certainly not having ‘the time of my life.’