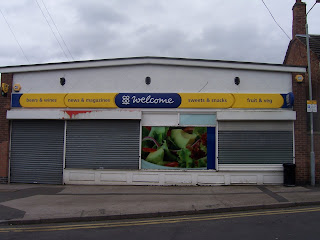 On the BBC website, I read with interest, that some scientists in Australia have discovered the smallest fish known to exist. They’ve obviously never been to the Plumtree’s Fish and Chip Shop on Nottingham Road, Keyworth.

It’s a sad, sad, day today. As regular readers will know I have a fixation with the Co-op Shop. We’ve had one in our village for nearly 40 years, and today it closed its doors for the final time. I, of course, nipped up to pay my last respects, but the darn shutters were already down. I’d hoped to get a photo with one of the girls on the till. I could have perhaps draped my arm around her shoulder and consoled her in her hour of need. But no, everybody had already buggered off home. 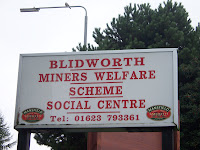 Familiar patterns are emerging on my Saturday mornings. It’s raining, windy and cold; once again I’m watching Nottingham City Boys at Highfields. It’s a ‘show your face’ exercise. Scouts natter with one another, boring each other to death about how they’ve found the next Wayne Rooney. All this bollocks is not for Sticky Palms; I’d much prefer to be out in the sticks, watching unknowns, like I was last Sunday. 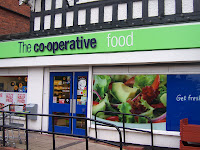 I arrive home for lunch. ‘The Skipper’ is lounging around on the sofa watching ‘The Crossbar Challenge’ on Soccer AM. Former Lincoln City striker Lee Thorpe hits the bar. It normally flew 5 yards over it when he played at Sincil Bank. Thorpe had an Andy Warhol moment last season, and hit the headline news. He broke his arm in three places whilst arm-wrestling on the team bus, en route to a crucial play-off semi-final.

Mrs P knocks up a French onion soup, with bread and cheese. ‘The Skipper’ is already dressed in his green football kit, excitingly waiting for his eagerly awaited clash against the once mighty Priory Celtic. I’m going to give it a miss today, although I predict an away win banker on the fixed odds coupon for the ‘Green Army.’ 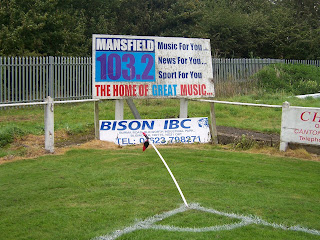 I’m on the Fosse Way and it’s starting to spit with rain. Birmingham are playing QPR and there’s match commentary on Five Live. It sounds an awful game. I change stations to ‘Radio Red.’ Midge Ure’s 1980’s hit ‘If I Was’ filters out the speakers. The Matchday programme begins. They’re chewing the fat over Forest’s dismal start to the season. I remember my final sentence in the Sunderland blog: ‘Where will all the goals come from?’ By 5pm tonight it will be over 400 minutes since they last hit the onion bag.

It’s the Notts Senior Cup again for me today and I’m looking for an upset.

I drive past Woodborough on the left and Epperstone on my right. I’m close to Calverton where I spent 15 happy working years of my life. I turn left off the A6097 and pass Oakmere Park Golf Club. 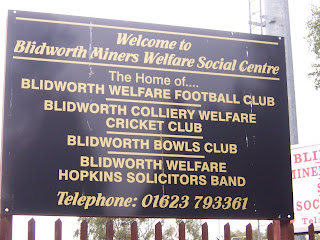 It must be 25 years since I’ve been to Blidworth. I used to enjoy a pint or two in The Bird In Hand public house. I drive past the war memorial and the ghastly Tesco’s (I pretend to spit) I’m looking for her, where is she? She’s got to be here somewhere. Oh yes, here she is: The Blidworth Co-op.

I stride through the double doors. I pick up strawberry flavoured Volvic water. I ask an assistant where the ground is. She’s proper grumpy. The girl on the till is more amenable. She points me in the direction of Blidworth Fire Station.

Blidworth is 5 miles east of Mansfield; it’s Robin Hood country. It’s allegedly the birthplace of Maid Marian. According to legend Will Scarlet is buried in the Church of St Mary of Purification. On the outskirts of the village lies the monument Druid Stone. It’s 14ft high and 84ft around the base.

Blidworth Colliery closed in 1989: good old Maggie. Two winding wheels act as a monument at the side of the road.

Blidworth Welfare were formed in 1926. They play in the Central Midlands Supreme League. Their manager has recently resigned to spend time looking after his brother who was tragically attacked by a gang of youths whilst holidaying in Crete.

Today’s visitors Bilborough Pelican are from Nottingham. They play in my favourite league: the NSL. The message forum is as busy as ever. Some of the NSL players have been big upping their league, saying it’s better than the Central Midlands. 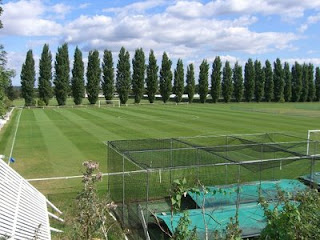 Other news to report is that Kevin Waddley is already on his third club of the season, having left Pelican for Boots. At this rate he’ll be challenging all-time Nottinghamshire record breaker Anthony Shannon, who’s had more clubs than White Van man has wolfed Pukka Pies.

Award winning comedian, and writer Henry Normal, grew up in Bilborough. He co-wrote The Royle Family. Nottingham Forest midfielder Matt Thornhill was recruited from Pelican Colts at the age of 14. 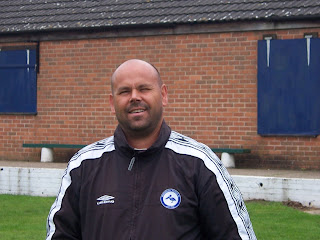 I’m sat in the car and really don’t want to get out. It’s blowing a gale and the skies are grey. I field a few calls from disgruntled scouts. I phone up Mrs P, ’The Skipper’s’ team are already two to the good.

I stroll over the car park and walk across the cricket field. The wind is battering me. A guy is walking towards me with a black leather folder tucked under his arm. He has a bald head and a rugged look. He is a bigger legend in Nottingham than Robin Hood: his name is Neil Swift and he is the best groundsman in Nottingham. He says he’ll meet me by the tea bar 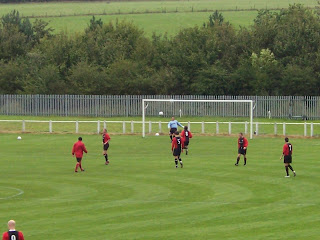 It’s £3 to get in and a £1 for the programme. I’m gobsmacked with the vista. The ground is stunning. The view from the tea bar is like standing on an old Spion Kop. In the distance is the old colliery spoil heap, now well and truly grassed over. At the bottom of the hill is the pitch.

Swifty shouts the tea up. It comes out of the pot and into a yellow ceramic mug. It’s easily the best of the season. I mark it 8.8. 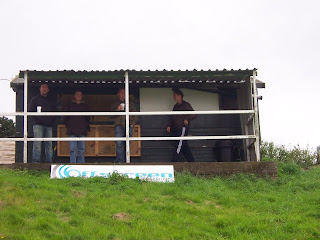 Me and Swifty are getting on like a house on fire, it’s like I’ve known the guy all my life. I was warned, before I met him, not to mention grass cutting machines as he has an unhealthy passion for them like I do for the Co-op. It’s too late now though as he’s up and running. He’s already scrutinising the grass. He’s got 25 episodes of Gardeners’ World to watch on Sky Plus. He’s telling me charming anecdote after anecdote of how he bought his Ransome Mastiff 30” grass cutter. I’m loving it. What a character this guy is. Every club needs one ..... a Swifty, not a Ransome. 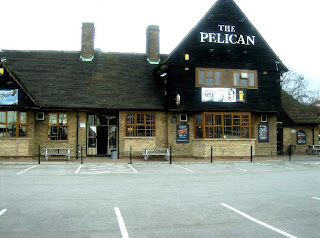 Swifty and some friends formed the original Pelican side twenty five years ago in the public bar of the Pelican pub in Bilborough. Who’d have guessed it, back then, it would now be one of the leading clubs in Notts.

We remain on the ‘Spion Kop’ as the game kicks off. Pelican are unrecognisable since I last saw them dump David Harbottle’s Dunkirk out the cup a year ago. Ian Barks, David Gunn, Roy Sharp and James Hendry have all departed.

Corey Bishop on the left wing is causing havoc in the early stages. He hits a cross shot that whistles past the post and curls a wicked free-kick past the upright. 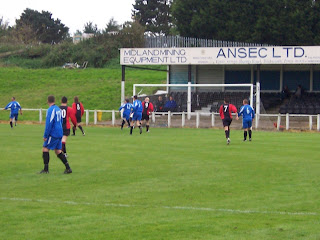 Blidworth begin to inch their way into the game. They have a few half chances before finally a long ball is thumped in from the left hand side, Blidworth captain Liam Best peels off his defender and heads the ball into the top corner. Swifty is in silence and in shock.

We go our separate ways and I decide to shield myself from the biting wind, and take a pew in a rickety old wooden stand with a corrugated roof.

Blidworth are in the ascendency and pour forward at every opportunity. Seventeen year old Connor Hardy is caught in possession on the half way line; the Blidworth forward scampers away, but wastes a good opportunity. 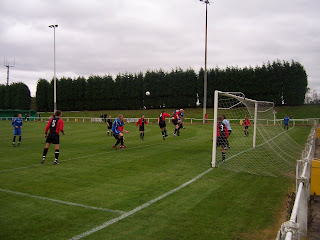 It’s soon 2-0 when a right wing cross is bundled in at the far post. Liam Best misses a gilt edged chance to seal Pelican’s fate.

The half-time whistle can’t come quick enough for the visitors. After a bright start, they’ve been on the ropes for the last twenty minutes, and are fortunate to still be in the game.

I wouldn’t fancy falling foul of BP chairman Glenn Russell, he looks more than capable of dishing out a good old bollocking. 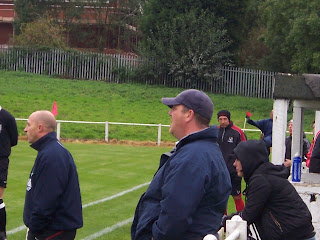 Manager Darren Saunders freshens things up, and shuffles his deck. The impact of all three subs is instantaneous. They’re running the legs off Blidworth.

Jason Russell picks the ball up 35 yards out; he pushes it out his feet, and fires a shot towards goal. The Blidworth ‘keeper has a ‘Beadle Hands’ moment, letting the ball slip from his grasp and roll over the line. 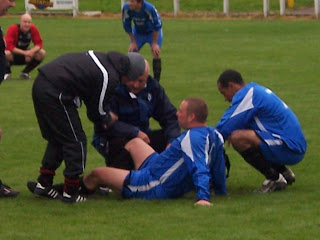 BPFC have their bit between the teeth. They are scrapping and battling for the ball. Eastwood fires straight at the keeper and forward Mark Gadsby snatches at a half chance.

I’m stood with Glenn and Swifty who are urging on the visitors. Swifty’s ‘Town Called Malice’ ringtone is constantly going off with people chasing updates. The ball just won’t go in. They’re not peppering the nervous Blidworth keeper’ with enough shots.

They’ve done the NSL proud but just fail at the final hurdle, through a lack of self belief. I will return to Lenton Lane on Wed Oct 15th when Keyworth United are the visitors.

Blidworth 2 Pelican 1
Attendance: not many.
Man of the Match: Liam Best
l
Posted by Sticky at 6:15 PM

Ay up Hopper, the Gypo here.

Get yoursen over to Bilsthorpe in January if you want to feel the breeze.

No shelter here from the wind.

Enjoy the Burton game... I'll be watching on TV...

I just have to say that them kodak moments I've been looking at brings back happy memories!
I sit back with excitement and tears looking at this priceless art! It's funny how a simple picture when seen can tell a whollllleeee story! haha well hey guys thanks so much for sharing, sometimes people need an enlightment of visual beauty to uplift the soul, and this sure did do the job!