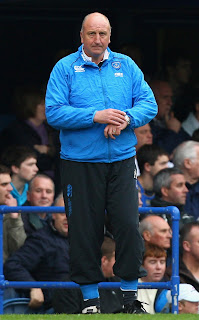 Trumpy Bolton has gone down a storm in New Mills. Takings were up 50% in the bar. Word has reached me that there’s talk of the Church Lane ground opening a new executive box and naming it the ‘Trumpy Bolton Suite.’

The legend had guzzled another litre of cider by the time I came off Junction 26 of the M1. He was slurring and talking bollocks all the way down the Nottingham ring road. He’s back on the phone again on Monday morning, booking his trip to Stalybridge Celtic’s Bower Fold ground on October 24th. Chopper Harris will make his groundhopping bow that day – should be a good un folks. 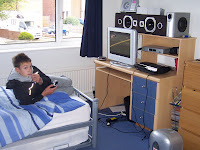 It’s been a busy week. Sticky junior is grounded due to classroom misdemeanours. The Playstation3 has been relocated to ‘The Skipper’s’ bedroom. All privileges have been stopped.

I got another new ground in last Tuesday night. I was sent on a scouting assignment to deepest, darkest Staffordshire. The location was Stones Dominoes FC. It was a successful evening. I picked up the relative of a famous footballer from the Nottingham area. He is like shit off a shovel.

The Architect drops me a text. The tickets are on their way from Molineux. Mrs P gives me the green light to go to Wolverhampton. I’ve been to 70 odd League grounds but have yet to chalk this one off. 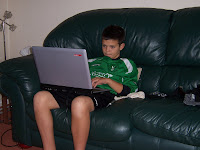 It’s 3am on Saturday morning. Mrs P is coughing, spluttering and blowing her nose. Sticky’s had enough and drags himself out of bed. I slump onto the sofa and cat-nap until daylight.

There’s time to clean out Keyworth’s friendliest rabbit - Finley Palmer. I feed him some chews for being a good lad – he’d never get detention if he went to rabbit school.

I race up to West Bridgford’s West Park to watch an under eight game. There’s a guy behind the goal decked out in a Tamworth tracksuit. I strike up a conversation with him. It turns out that he’s the assistant manager and is called Darren Gee. He’s a helluva nice fellow. They have a tough away trip to Luton Town today. 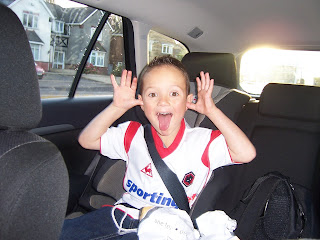 ‘Gangsta’ will be getting all excited now – he’s only five years old. He’s joined up as a Junior Wolf and has a free ticket for today’s game as part of the package. I ring him up to see if he’s got the sweets and pop in. Trumpy would not be impressed to see a soft drink in a plastic bottle – it’s normally Old English Country Cider when he’s on the circuit.

‘Gangsta’s’ got the Fruit Shoots and Haribos in. We set off at bang on midday. I sit in the back of the car, teasing and tormenting the youngster. He looks a shade tired. The big girls’ blouse confesses to having a late one last night. He snuggled up with his Mum on the sofa and watched High School Musical. It was gone 10pm when he finally hit the sack. I call him a pretty boy. He sticks his tongue out at me. 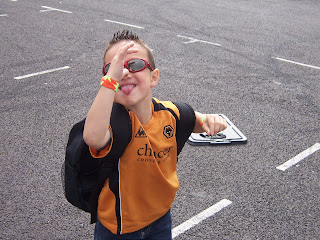 I ask ‘Gangsta’ who his favourite Wolves player is. He replies that it’s Paul Collingwood. I must have missed that transfer on page 323 on Ceefax.

We have a sweepstake on the game. Dad and lad go for a home win, whilst The Groundhopper predicts a first win of the campaign for Paul Hart’s Portsmouth

We’ve only been in the car for ten minutes and already ‘Gangsta’ is bored with The Groundhopper’s tired, old drivel. He retires to his Nintendo DS. As we approach Kegworth, we notice blue flashing lights. A tree has fallen into the road. A copper tosses it off in his car, eating a sandwich. He’s probably listening to some uneducated radio station like Talk Sport. 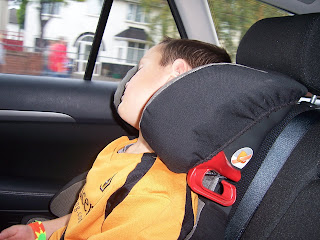 ‘Gangsta’ is a cracking footballer. He has lightning pace and a good technique (I know he’s only five years old). He bagged a brace last Sunday at the Keyworth United Soccer School. I’m quite keen to snaffle him up for ‘The Pies.’ His Dad is a red hot Forest fan so negotiations could be complicated.

The deal is brokered at the A50 services near to Castle Donington. ‘Gangsta’ puts pen to paper on a five year deal, which includes a bag of Maltesers, a Twix bar and two cans of Red Bull. I hope he lasts longer than Sol Campbell!

Tough bargaining has taken its toll on the youngster. He drifts into a peaceful siesta in his car seat, 10 miles outside Wolverhampton. 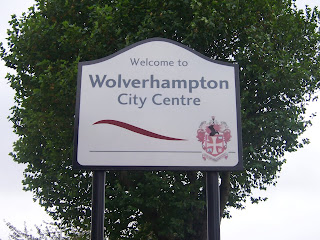 We pass signs for the Black Country Museum. Sticky junior was on a school trip there yesterday. Apparently there were some high jinks, schoolboy pranks and serious snogging on the back seat of the coach.

We park up in the Science Park, about a mile from the ground. ‘Gangsta’ has already sniffed out a McDonalds and has sprinted off ahead – nice running action. It’s my treat. ‘Gangsta’ has a Happy Meal. He’s so absorbed with his chicken nuggets that he fails to notice the non-arrival of his chocolate milk shake. It’s a ticking off for the waitress. 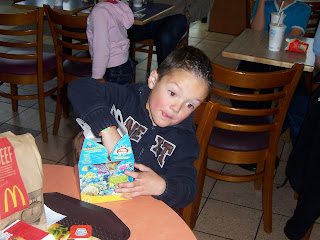 We take a stroll up to the ground. The area is characterless. ‘Gangsta’ takes a tumble on some cobbled paving, narrowly avoiding a metal bollard.

Wolverhampton has a population of 250,000. It was once famous for mining coal, limestone and iron ore. The first set of automatic traffic lights were trialled in Wolverhampton in 1927. Its biggest employer these days is Wolverhampton City Council. 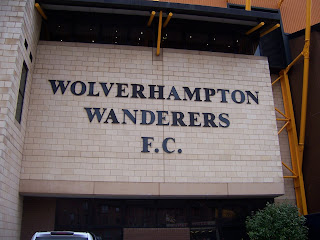 The McDonalds Happy Meal has revitalised ‘Gangsta.’ He’s been saving up his pocket money for weeks, so he can procure the new white away strip. He joins the queue of hundreds entering the megastore. The Groundhopper has a saunter around the stadium and takes a few snaps of the Stan Cullis and Billy Wright statues.

Mrs P spends less time in the Marks and Spencer’s Food Hall than ‘Gangsta’ does in the Wolves Club Shop. He finally emerges with a bag full of goodies, fifteen minutes before kick -off. 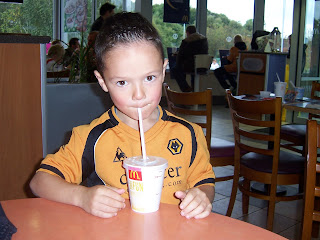 When I think of Wolverhampton Wanderers I always associate them with Hugh Johns and Star Soccer. They had great players like Kenny Hibbert, John Richards and Derek Dougan. Sticky saw Wolves beat Nottingham Forest in the League Cup final at Wembley in 1980.

Portsmouth FC have hit skid row. No points in seven games, no wages last Thursday and their owner is in hospital having kidney stones removed. Paul Hart, their manager, is The Groundhopper’s favourite. Sticky Palms shelled out £200 per year in a season ticket at NFFC. 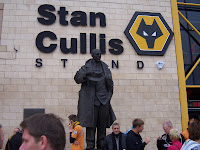 I used to love watching Louis-Jean and Brennan bursting down the wing, Prutton snapping in the tackle, the sublime passing of Gareth Williams and the pace and energy of Marlon and DJ. Happy happy days indeed.

Wolves come out to ‘Hi Ho Silver Lining by Jeff Beck. ‘Gangsta’ is giving it large. Wolves are at Pompey from the off. Winger Matt Jarvis runs at the ageing Steve Finnan but doesn’t possess the quality of a final ball.

‘Calamity James’ is called into action twice in the early stages. The game has an ebb and flow about it. Pompey begin to master the midfield. O’Hara is superb in the holding role. Prince-Boateng and Yebda get forward at every opportunity and keep the ball moving. 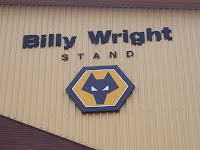 The smirk on ‘Gangsta’s’ face is firmly wiped away on twenty minutes. Prince-Boateng swings a ball in from the right, where an unmarked Yebda heads home. ‘Gangsta’s’ not a happy chappy. His bottom lip is quivering. He gives the Pompey fans to our left the evil deadeye.

The game is enjoyable. Both sides squander chances before the break. ‘Gangsta’ breaks into a pack of cheese flavoured Quavers and washes it down with an orange Fruit Shoot. Mrs P texts in to say she’s bought a curry from Sainsbury’s for a fiver. It’s a tasty chicken Jalfrezi for Sticky when he gets home tonight.
Barthez also drops me a text to say that Keyworth United have been thumped 4-1 in the Notts Senior Cup by Kirkby Town. 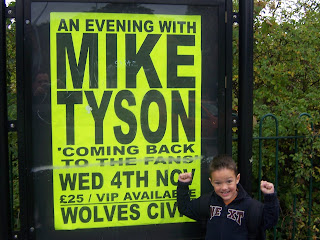 Sylvian Ebanks-Blake and the highly-rated Michael Kightly are thrown into the action after the break. Wolves have more movement and pace.

There’s a glaring miss from Dindane after only twelve seconds of the restart. There’s a huge shout for a penalty following a clearance by Marc Wilson from a cross by Kightly (Match of the Day cameras prove conclusively that it was indeed a blatant handball). 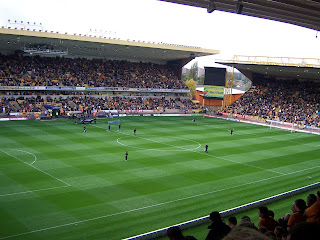 Pompey shuffle their pack and try to shut up shop. Their centre half Younes Kaboul is the best player on the pitch by a country mile. He wins countless headers, makes last ditch tackles and makes powerful surging runs. Old miserable ‘Deputy Dawg’ (Harry Redknapp) moans and groans about the lack of a centre back at Spurs. Well ‘Arry’ you let a gem go here son.

Wolves left back George Elokobi has mysteriously blagged his way from Dulwich Hamlet to the Premiership. He has the touch of a baby elephant. He makes Claude Davis look like Marcel Desailly. Perhaps he’s George Weah’s cousin? 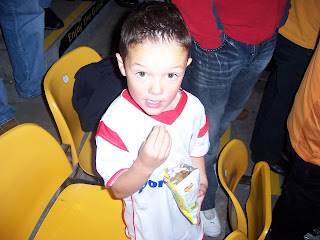 On 85 minutes, ‘Gangsta’ can’t cross his legs any longer. He’s dying for a wee and departs for the toilet, threatening not to return. In the closing moments Halford blasts a free-kick towards goal, it’s beaten away by James but falls into the path of Ebanks-Blake, who can only blaze over the rebound from close range.

‘Gangsta’ is not happy and whacks me in the shins a few times. It’s another reason why I’ve signed him on a five year contract.
Posted by Sticky at 6:24 PM

That 'Gangsta' sounds a right rum 'en. You can only blame the parents ;-)

Send him round to the GodFather for a week !!

Hey there! I know this is kinda off topic however , I'd figured I'd ask.
Would you be interested in exchanging links or maybe guest writing a blog post or vice-versa?
My site covers a lot of the same subjects as yours and I
believe we could greatly benefit from each other. If you might be interested feel free to shoot me an email.
I look forward to hearing from you! Wonderful blog by the way!


Take a look at my web-site live party sex