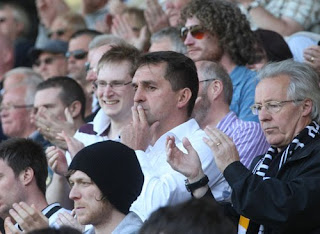 We’re walking out of Bury’s Gigg Lane. Police surround a coach that has had a window put in. The coach is from Bootle on Merseyside. An Irish team were paraded around the ground earlier today; I hope it’s not their bus.

Trumpy Bolton has had one hell of a day. He’s downed near on a gallon of ale and has met Chris Hughton and Five Live reporter Peter Slater.

We jump in the Rolls Royce and head out of Bury. I try to put Lincoln’s defeat to the back of my mind. But I can smell the fear of relegation. They lack experience and have people playing out of position. We badly need the return of leading scorer Ashley Grimes, who is on loan from Millwall.

A ray of sunshine appears from over the Pennines in Leeds. Nottinghamshire County Cricket Club have rolled over the Tykes for 86. We’ve been outplayed for the best part of two days, but Chris Read’s men never know when they are beaten. 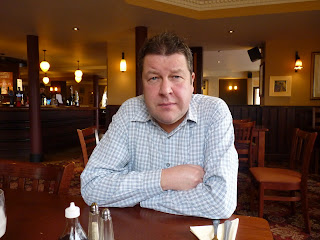 As we near home I tune into ‘Radio Red’ (Radio Nottingham). The Tricky Trees are playing the Foxes of Leicester (Trumpy’s team). Chris Weale has thrown a Paul McKenna shot into his own net. ‘U Reds’ are 3-2 up. Trumpy requests that the radio is switched off. He sulks over another alcoholic beverage in the Three Ponds in Watnall.

We both bizarrely spend the rest of the evening at a girl’s thirteenth birthday party in our village. After all that driving over the hills of Derbyshire and Lancashire, I retire to bed after a limp effort of just two bottles of Peroni.

Domestic chores dominate the weekend. It’s now the fag end of the season and I’m looking forward to a footballing bonanza in the next fortnight or so. I nip into the inner city to watch a player on Saturday lunchtime. The tip is that he’s playing a year up. Sadly, he’s not on the team bus today.

I call in at Clifton All Whites Green Lane HQ. Their Reserves are up against Boots Athletic. Big D, Barthez and Yogi are viewing the game. Goals are scored in the 118th and 119th minute. Clifton win 4-3 on penalties. 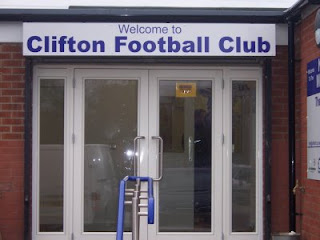 I snatch glimpses of the Old Firm game on Sunday. Neil Lennon cups his hands over his ears and gestures towards the Ibrox crowd on his way to tunnel. It is alleged that Glasgow Rangers handed out over 40,000 Union Jack flags to their supporters.

On Sunday evening we all watch the excellent BBC drama ‘United’, starring David Tennant, who plays Matt Busby’s assistant Jimmy Murphy. It’s a story I’m interested in, as my father was a rookie reporter on the Daily Express in Manchester in 1958.

The Munich Air Disaster was his first big story. He spoke to Matt Busby and Bobby Charlton by telephone, as they lay in their hospital beds. I still have the cutting of his front page splash in my loft.

Both my lads are touched and moved by the drama. They are visibly upset when it is announced that Duncan Edwards has passed away. 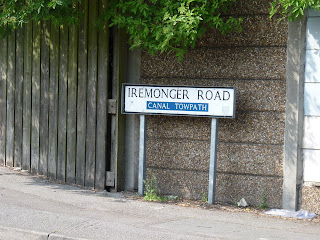 It’s Monday morning. The Pies have a ‘two for one offer’ on today, if you can manage to get down to the Ticket Office before 1pm. The Nuclear Scientist is up for the game, and so are my lads.

We park up on Iremonger Road, and stroll up to the ground, passing Mower World. I notice that the Trent Navigation is up for lease again. It has had more owners than Portsmouth FC.

We return four hours later and park on Daleside Road. Martin Allen has put a smile back on the faces of the World’s oldest Football League club. He’s a people’s person. He writes off-the-wall statements on the Club website, and has already struck up a fantastic rapport with ‘Uncle Colin’ on Radio Nottingham. 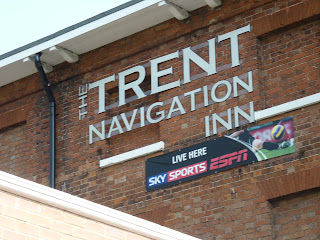 He joshed with Slater after a recent win at Tranmere Rovers about his tweed jacket and brogues. I am hoping with the belief in his company Pro FC that he might bring in one or two rough diamonds from the Non League scene in the summer.

I read his ‘Sunday Sermon’ this morning. He wrote a gripping and thoughtful piece about his feelings and emotions from The County Ground at Swindon on Saturday. He described the disgraceful actions of some Robins’ supporters, whose treatment of Paul Hart (another proper football bloke) was disgusting and vile.

We walk at the back of the Derek Pavis Stand. Mr and Mrs Magpie give us all a high five. We take a pew up in the heavens smack opposite the 18 yard line, to the Kop side of the ground. 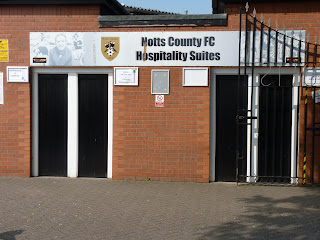 The Bees have brought a couple of coach loads, which is more than can be said of the Imps at Bury on Friday. Martin Allen took Brentford to the play-offs twice between 2004-2006.

Brentford is a suburb in west London in the London Borough of Hounslow. Well known people born in Brentford include the actor John Bardon who plays soap character Jim Branning in EastEnders and former Crystal Palace and Coventry City footballer Richard Shaw.

The Pies are on the back of two away wins at Tranmere and Swindon. Lee Hughes and Alan Judge are back to full fitness and will start the game today. 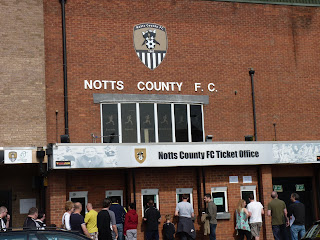 The atmospheric ‘Air That I Breathe’ by Manchester 60’s pop group The Hollies blasts out from the speakers. The players march out to the theme tune from the Great Escape. Girls from Hooters Bar, dressed in skimpy orange outfits, act as cheerleaders.

Allen is dressed in a white shirt and navy blue tank-top. He looks like 70’s golfer Seve Ballesteros when he won the British Open. He prefers an elevated view of the game. He leans on the back of the dugout.

Notts begin the game brightly. Pearce and Edwards are reunited in the centre of defence. Judge pairs up with Stockton-on-Tees born midfielder Neal Bishop. There’s no ‘Rocky Ravenhill’ today. He’s lived up to his nickname – 11 yellows and two reds have done for him. 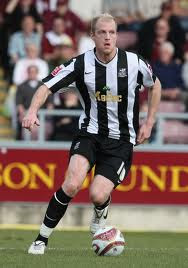 Karl Hawley appears to have had his confidence restored as he continues to win his battle with the boo boys. I saw him destroy D***y County in an FA Cup game a few years back when he was with Preston North End. He was man of the match by a country mile that day. Hawley has two strikes on goal in the opening 20 minutes.

The Bees have pride and position to play for. They look relaxed and play with confidence, particularly with the speed of their counter-attack.

Brentford have the best chance of the first half. Robbie Simpson plays in Lewis Grabban on the left hand side, he pops a shot off which is blocked by the legs of County ‘keeper Stuart Nelson. The rebound is fired wide of the right hand post.

I look up towards the commentary box. I can see the legend that is Colin Slater, dressed in his Sherlock Holmes outfit. Behind him Dean Yates chats to former Pies’ ‘keeper Steve Cherry. 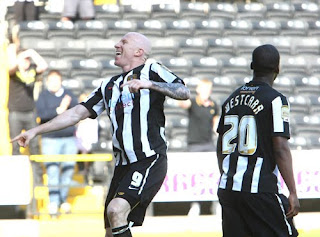 Sticky jnr texts in, he’s been chatting to the Hooters girls and has been trying to get their mobile numbers: that’s my boy. Keyworth Utd Reserve team manager Alan Jackson is sat in Block B in the Pavis Stand. He’s probably at the back of stand smoking his second packet of Hamlet.

The Pies again start well. The impressive Judge fires over. But Brentford are rapid on the break. German striker Jeffrey Schlupp, on loan from Leicester City, forces a near post save from Nelson, having just been introduced to the game.

Dangerous winger and ex Pie Myles Weston, booed with his every touch, floats a cross in from the right, which Marcus Bean fails to convert.

The game opens up as both teams search for a winner. Martin Allen is getting hot and sweaty; he peels off his tank-top and tucks in his shirt. 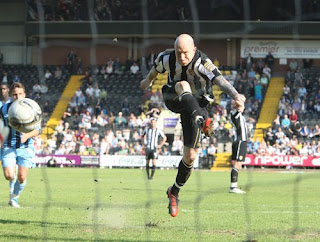 Westcarr smacks a shot from 25 yards out, it hits the defender full on and pole-axes him to the floor. The linesman incredibly awards a penalty. There’s a long delay while Osborne receives treatment. Weston winds up penalty-taker Craig Westcarr. The spot kick is brilliantly saved by Moore.

Moments later the Magpies are awarded another penalty for handball. Lee Hughes successfully converts, despite scuffing the ball.

Mad Dog is sent to the stands by the man in the middle for allegedly kicking the ball away. He’s sat with the crowd and directs traffic from the stand, as the game reaches a crescendo.

The fourth official indicates an agonising six minutes added time. Brentford look fagged out but are awarded a free kick. The ball is cleared to Sam Saunders, who threads a ball through to Schlupp, who is allowed to turn by Sam Sodje and get a shot off that Nelson can only help into the corner of the net.

The goal is scored 30 seconds from time. The hush and silence is frightening. There's no anger, just disbelief.

Man of the Match: Neal Bishop

Thanks to Ralph Shepherd and John Sumpter for allowing me to reproduce some action photos from the game.
Posted by Sticky at 10:06 PM