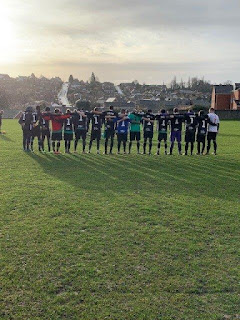 It's 2 a.m. on Tuesday 21st December. The alarm on my phone is ringing out. A bleary-eyed Sticky Palms sleep walks to the bathroom for a shower and a shave. Our regular taxi driver arrives at 2.40 a.m. on the dot. It's a long story folks. In a nutshell, it's our first holiday abroad in nearly two years. We've both been lying low and self-isolating for the last 10 days in an effort to avoid COVID.

Our flight leaves Birmingham Airport bang on time. We've already hoovered up a large 'Spoons breakfast - not the sort blog drinking legend Trumpy Bolton dreams of. On arrival in the resort of Los Cristianos, in Tenerife, we are greeted with heavy rain showers. I sit in Harriet's English Tea Rooms, glum-faced, watching the rain teeming down. Within an hour the skies clear and the sun peeps out. We finish the evening enjoying the sunset on the front at Playa de las Americas, at our favourite bar, Royal Palace, as surfers ride the waves of the Atlantic Ocean. 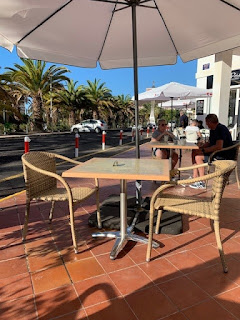 What a holiday we have. We spend Christmas Day on a 12 hour bender in the Queen Victoria with one of my closest friends, David Bishop ('The Big Man'). We are joined too by John, Adrian and Marie. The Big Man's Christmas lunch is polished off in the blink of an eye. There's a steward's enquiry over the state of the cheesecake. The chef makes an appearance and an apology too.

Most of the holiday is either spent by the pool, walking into the resort or sampling local craft ales at a cool bar Ms Moon sniffed out, a five minute walk from our apartments. The only time we really venture out of the resort is when we visit Golf del Sur where the Spanish Golf Open is often held. 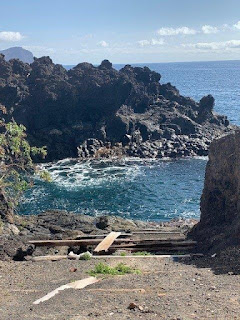 We land back on terra firma on Dec 28th, Tuesday teatime. There's a nervous two day wait before negative PCR test results are returned by email. It means I have the green light to begin a weekend footballing bonanza after a 26 day lay-off. I put the two days in isolation to good use by listening to the entire back catalogue of Manchester band New Order.

Carlton Town's Northern Premier East League fixture versus Daventry Town is first on the agenda. I hook up with anti-BREXIT campaigner and diehard Tricky Tree, Jitz Jani. We share a couple of pints of Guinness and watch a breathtaking game of ball with The Millers edging home, with a 3-2 win, courtesy of a Tyler Blake goal. 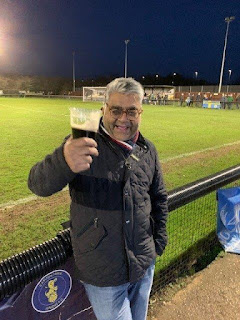 It's Sunday morning and day two of a footballing frenzy. High-flying, big time Charlies, Wrexham AFC are in town. The club have had to play behind closed doors at The Racecourse Ground due to COVID restrictions put in place by First Minister of Wales, Mark Drakeford. Near on 2000 fans are expected to travel from North Wales. The club are in the spotlight due to being joint-owned by Hollywood actor Ryan Reynolds - to be honest I've never heard of him.

I take my usual seat in the Derek Pavis Stand, adjacent to the Directors' box. The season has been a little stop start for the Magpies. But they play a beautiful game, are easy on the eye and their form at home is solid. 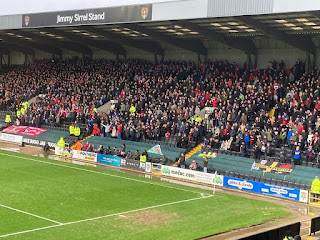 There's an extraordinary start to the match. Wrexham take the lead with a shot the speed of an exocet missile, from 25 yards out. U Pies come storming back. They convert a penalty on 8 minutes, with a guilty Dragons' defender sent off for deliberate handball. Wootton scores another goal to put them ahead.

The game-changing moment is early in the second half. Wrexham are awarded a penalty which is beaten away by Pies' on loan 'keeper Anthony Patterson. Notts storm forward, raiding down the Wrexham left hand side. The brilliant Jayden Richardson, a Meadows lad, on loan from Forest, controversially heads home the winner. It's without doubt the best game of football I've had the pleasure of watching this season, despite the tantrums and moaning of Wrexham manager Phil Parkinson. Notts have passed the Red Dragons off the park. 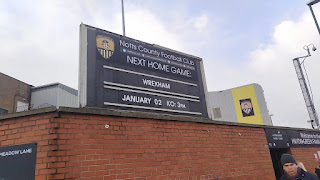 Monday 3rd January. Carlton is treated to sun-kissed clear blue skies. I walk down Carlton Hill, through Sneinton (without a glance at Neon Raptor Tap Room,) and up onto London Road. Sticky junior picks me up in County Hall car park and drops me off outside Clifton All Whites ground, another club very close to my heart, as is their ex-manager James 'Tosh' Turner. I love Tosh to bits and was so sorry to hear of his father's recent passing. He takes the rise out of my dodgy eye, following recent operations.

The Boatmen of Dunkirk are today's visitors - never an easy team to play against at the best of times. Clifton have finally invested in youth, something Dunkirk have relied on for an age. I chat to a couple of groundhoppers, and also bump into a parent of a lad who plays for Basford United - a team that are dropping like a stone down the Northern Premier League. 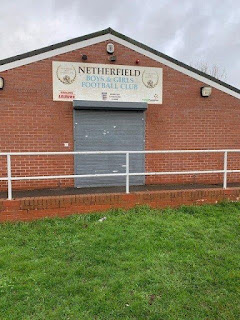 It's a feisty encounter. Dunkirk are off the boil, firing blanks and looking there for the taking. The young guns of Clifton lose their cool. A lad I rated highly at Burton Joyce, and who I tipped Tosh off about, is sent off the field of play, after an act of petulance. Dunkirk take the lead shortly before the break.

I watch the second half with a good mate of mine called 'Barthez.' Hopefully he'll be in Tenerife with his partner Donna at the same time Ms Moon and I are, in mid March. Ten-man Clifton are back on level terms, scoring a rebound from a fluffed spot kick. They are then reduced to nine men which ultimately costs them the game when a ruthless Dunkirk snatch a late winner through Sam Harbottle, son of club legend, Dave. 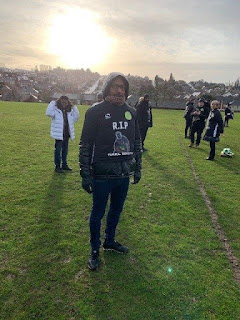 It was meant to be four games in four days as I've been given the green light to return to watching Radford FC by manager Big Glenn Russell. I've served a 10 match ban (they won 9 of them) because every time I tip up at Selhurst Street they somehow get beat. It's freezing cold on Tuesday evening and there's a brilliant drama on ITV (can't say that too often) called Anne. It's about the tireless work of Hillsborough campaigner Anne Williams, whose part is brilliantly played by Sticky's favourite actress, Maxine Peake.

There's no Friday evening boozing with Tony Mac in 'the New Covent Garden' (Sneinton). We're resting up for a couple of weeks. I'm dispatched to Marks and Spencer Food Hall on Victoria Retail Park, in Netherfield. We settle in for the evening at Chez Palms. I sink a few bargain buy craft ales from Suds and Soda and enjoy a classic burger in a brioche bun with all the trimmings. 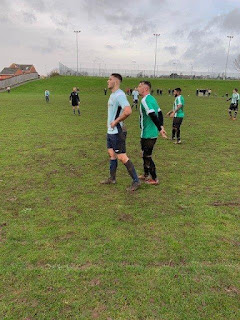 It's pouring with rain as I open the curtains on Saturday morning. I check the excellent Malcolm Storer's twitter account to see which games have fallen by the wayside. First choice today was going to be Linby Colliery Welfare, but it's been postponed due to a COVID outbreak.

Netherfield Seniors play at the Richard Herrod Centre, a 15 minute walk from ours. The club assure me that the game is on. Ms Moon says it isn't that cold outside. Her theory is based on drawing on a couple of fags in the 'smoking shelter' (back garden). I'm taking no chances and have got my Parka on and Stone Island beanie, in case there's any bother (lol ..). 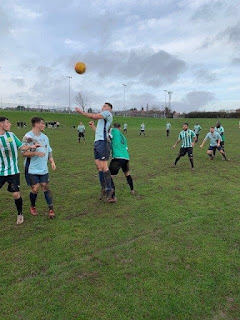 Nottingham Community are today's visitors. It's a wonderful club that is based in the Meadows, an inner city area of Nottingham, where the likes of Jermaine Pennant and Wes Morgan grew up. There's a one minute silence, followed by applause, in the memory of Karl White, 'Mr Meadows', a legendary community leader who sadly passed away in December. All the visiting players are wearing black tops with the number 1 on and the word Legend - it's a lovely touch.

The Notts Senior League is one of my favourites. I coached my village team in this very league three seasons ago and thoroughly enjoyed it. There's not much doing in the first half. Netherfield are by far the better side but keep wasting chances. Community have not trained or played in the last three weeks. As a supporter says to me "we're still running off the pigs in blankets mate."

Netherfield finally beat the door down and take the lead. There is a serious breach of groundhopping rules at the break. Ms Moon announces she's too cold and is off home to watch the latest episode of Celebrity Coach Trip. It's a minimum three match ban with further repercussions expected when the 'Groundhopping Police' hold an emergency meeting on Monday evening during Emmerdale Farm. 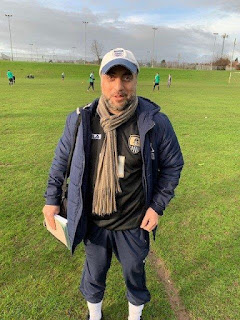 The second half is why I love grassroots football so much. 'The Meadows Pirlo', Ryan Perkins, rallies the troops. They drive forward and level terms with a controversial equaliser. Netherfield pour forward too and win a penno that's converted. You can't take your eye off it (even my dodgy one). Community throw the kitchen sink at them, equalising again, causing wild celebrations in the 'away end.' Club secretary Naeem Rashid whoops with joy.

They let themselves down in added time. A player is sent off for shoving an opponent and 'Pirlo' is sin-binned for calling the ref a clown. With the clock running down, the Netherfield 10 jacket scores a banger on a playing surface that you could grow potatoes on.

What an afternoon out I've had, and all for FREE too. There's only one place to celebrate: The Rap Tap.