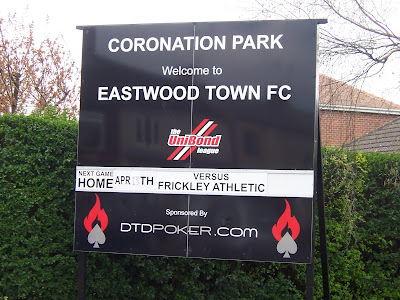 We’re exiting the New Manor Ground at Ilkeston Town. It’s been a good second half for the neutral. We sidle our way up the steps, past the morons who caused all the trouble earlier in the game. We are met at the top of the steps by the Derbyshire Constabulary. We’re prevented from leaving the ground as they are trying to clear the car park of Eastwood Town fans.

I tell Plod he’s wasting his time and chuckle at their jobsworth attitude. The guy’s a special constable; he’s been drafted in. After ten minutes we’re finally allowed to leave. Police are swarming about outside the ground.. I thought for one scary moment that Mrs Thatcher had returned to power. The last time I saw security this tight was when a lorry load of Pukka pies were delivered to White Van Man’s house. 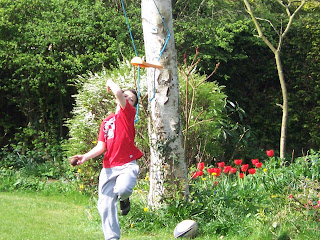 We reach the ‘Green Rocket.’ WVM opens his boot to put his coat away. A police Alsatian dog is trying to take a huge chunk out of his backside. I tell the dog that if he wolfs up WVM for his dinner, then he won’t need a meal for a week. Even the copper is laughing.

The police have blocked the road off; we’re forced onto the A610. WVM spots a peroxide blonde caught up in the traffic. She’s a tidy piece. He asks her out on the spot. She doesn’t decline his offer. 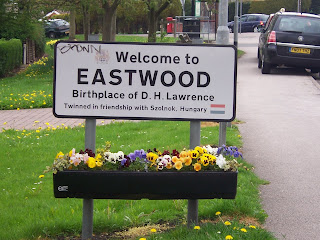 We slip into West Bridgford for a few swift jars. I begrudgingly grace the Fire ‘n’ Ice Bar on Bridgford Road. It’s fur coat and no knickers territory. ‘Bruiser’ is in there drinking his designer shorts. I thought he was still stuck in the clubhouse at Shepshed Dynamo. He’s rinsing me big time about my poor performance in Putney High Street last Saturday.

It’s Saturday morning and I’m out spying for The Pies. I take a peek at a couple teams in Basford and Clifton and make a few mental notes.

I watch both my boys in the afternoon. They play with vigour and style. I knock up pasta in prawns in the evening. I’m grovelling big time and finally pluck up the courage to ask the question, following a bottle of Chardonnay. 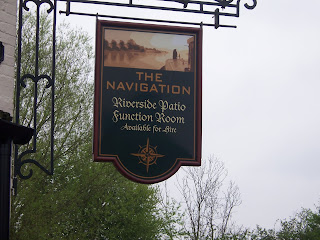 I’d noticed on the Eastwood Town entertaining fans’ forum that Sticky’s number one favourite chairman, Robert Yong had rewarded the people of Eastwood with free admission for their final two home games.

“What are we doing Monday love?” “Not a lot” Mrs P replies. “I could take the kids to Eastwood, it’s on the house?” “Yeah, clear off the lot of you and leave me in peace.” Coronation Park here we come. 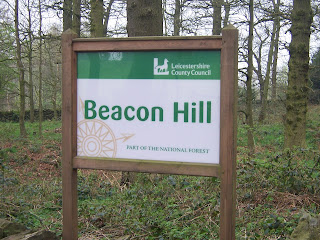 We spend Sunday in Leicestershire. I manage to grab a pint and a spot of lunch at the impressive Navigation Inn at Barrow upon Soar. We walk off our meal at Beacon Hill just outside Loughborough. ‘The Skipper’ and Sticky junior” are moaning more than Sir Alex Ferguson.

It’s Monday morning, the day of the game. Eastwood will still be bitterly disappointed about their no show at Ilson on Friday. There’s been 27 pages of discussion about the game on the Badgers’ forum.

White Van Man has been on an Easter Sunday bender with his shandy drinking mates. I give him a tinkle. He’s crying off, electing instead to watch Screats who’s playing at Quorn. The kids are upset as WVM is entertainment value. 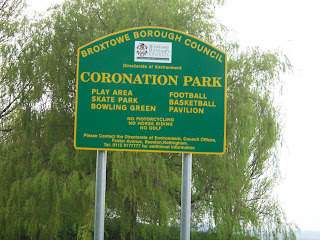 I can’t tempt Mrs P to an afternoon out in Eastwood. I offer her lunch at the Man in Space; she says she’d rather creosote the fence (which she did).

JK picks us up at 1.45pm. He’s got Radio Nottingham on. They’re playing the awful Jason Donovan track Any Dream Will Do. Even the Ilson DJ wouldn’t stoop this low. We head off up the Nottingham ring road. He throws a left at Beechdale Swimming Baths. We drive past the The Beechdale public house; people are looking set for an all day drinking bout.

Parking is free at the secure car park at Coronation Park. I notice there are a lot of new sponsorship boards up advertising the Dusk Till Dawn Poker Club which is owned by the Eastwood chairman. 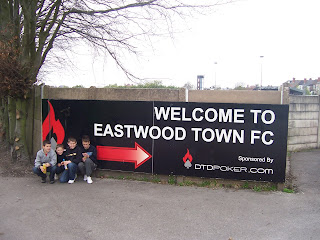 I take a stroll towards Chewton Street to take a few snaps. A little girl comes careering off her bicycle and smashes into the kerb. She’s grazed her knee and is being nursed by her sympathetic father.

We walk through the gate; its free admission. We buy a programme for £2 and put some money in the charity bucket. JK has a quick gleg in the already bustling social club.

The disc jockey is playing Liverpudlian band The Farm’s classic tune All Together Now. The cloud is breaking, the sun is peering out and the air is still. 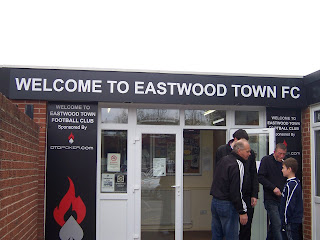 Frickley Athletic (previously known as Frickley Colliery) is in South Elmsall, West Yorkshire. It’s an area that has been devastated by pit closures. The town has a population of 18,000. Famous folk from round these parts include Geoff “my Nana could have caught that in her pinny” Boycott, the late, great, Spurs player, Cyril Knowles and the old ITN newsreader, Leonard Parkin.

I saw them demolish Lincoln United 4-1 over a year ago. It was the day Screats was sent off for a two-footed challenge. Two hundred old miners were baying for his blood that day. They are currently mid- table, with contracts to play for.

Big D has appeared on the scene; he’s brought his son Roscoe with him. They are already muttering about having a pot of mushy peas and mint sauce from the excellent snack bar. There’s an army of volunteers already beavering away, attending to our needs, providing food and drink. The tea is outstanding and is perfectly brewed. I’m in the mood to mark it with nine. Only Holbrook MW can match its quality. 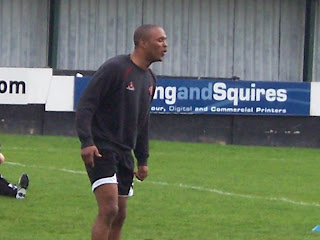 I can’t put my finger on the reasons for Eastwood’s mystifying display at the New Manor Ground last Friday. They looked confident in the warm-up but just never got going. Ilkeston are five points behind them with two games in hand. Today they visit Boston United’s York Street.

We stand to the left of the Eastwood Town dugout; Paul Cox is normally good value. The Badgers are pumped up and play at a greater tempo than Friday night. 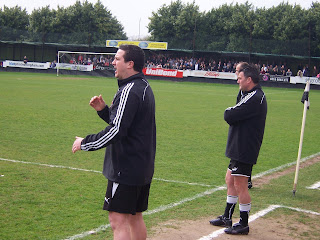 Already the Badgers are racking up the chances. Huge defender Mark Hume has a header cleared off the line. Richard Dunning doubles their lead on 10 minutes, firing a shot into the corner of the net.

Assistant manager John Ramshaw is in pensive mood; I know he has suffered this weekend. Meanwhile manager Paul Cox can talk for two. He is the king of clichés. I play a little game with myself and note down a few: “up the tempo”, “raise it”, “organise”, “pressure”, “second ball”, “keep your shape.” No need for the swearing though Paul.

The chances keep coming and going for Eastwood. Knox, Robinson and Meikle are all guilty of misses. On 25 minutes Lindon Meikle scores an outrageous goal, striking the ball with the outside of his boot, his shot ending up in the top left hand corner of the goal. Eastwood are coasting. 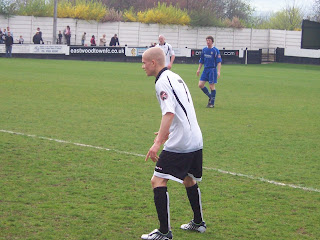 JK has got his earpiece in; he’s listening to Radio Red at Bramall Lane. He’s whittling himself to death about a ten man Forest and is convinced that they will concede any minute now.

The Blues of Frickley begin to claw their way back into the game, they work Badgers’ keeper Ian Deakin. Davies and Towey both spurn chances.

Big D has been plucking the courage up to devour some peas. He required St John’s Ambulance treatment at the Wrexham game, after burning the roof of his mouth. Roscoe is dispatched to the snack bar. Unfortunately young Roscoe has a ‘Beadle Hands’ moment and spillage occurs on Big D’s coat. 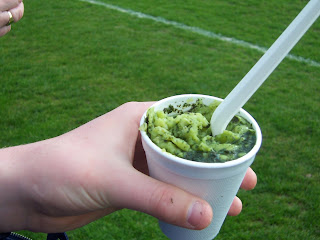 I’ve got my new fleece on from H&M. I’m well chuffed with my £15 bargain. Mrs P reckons I look like a convict in it. I pull up my hood to fit in with the crowd.

Eastwood just can’t put the game beyond Frickley’s reach. Meikle misses a one on one and the Badgers have two more efforts cleared off the line. But Frickley Athletic are a plucky lot and reduce the deficit on the hour with a smart finish from Neil Towler.

The scary looking Peter Knox steers the ball into an empty net a minute later following a miscued clearance. 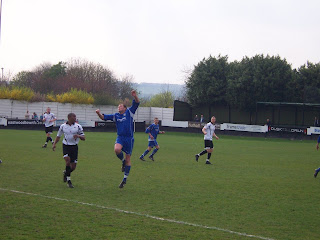 Frickley won’t go away. Dean Kilburn, their substitute, looks a tidy player. He tucks away a shot to make it 4-2. Eastwood have clocked off by now.

The final whistle goes. All the players and management applaud the near 1000 strong crowd. It’s been cracking entertainment. Both the referee and Frickley have played their part. Ilson have dropped two points in Lincolnshire. They’re not going to fancy the trip to Nantwich Town on Wednesday evening.

Man of the Match: Paul Robinson
Posted by Sticky at 9:01 AM

top write up as always, will you be there to hopfully win the league againts ossett? unless we've already won it at ashton.