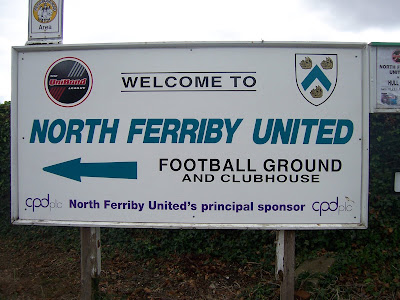 I’ve had a brilliant summer so far but something nags away in the back of my mind; an injustice witnessed on British television that just won’t go away. It was a nailed on certainty. Their performance was polished and complete. They left the remaining competitors standing. Question marks remain, once again, over ITV’s telephone voting system. Yes, you’ve guessed it, how the hell did kebab-eating, north London comedy duo Stavros Flatley not win Britain’s Got Talent? Good luck at Butlins in Minehead this weekend lads.

OK, so groundhopping has left a hole in my life since late April, how have I filled it? Well, I’ve scouted for ‘The Pies’ at over a dozen tournaments, I’ve been to all Twenty/20 games at Trent Bridge, including the World Cup semi-final and I’ve slurped a whole bottle of Bombay Sapphire gin on the patio during the recent heat wave.

White Van Man phoned me last Saturday night, live and exclusive from Albufeira in Portugal. The Tricky Trees were performing and the big man had bulldozed his way through two days of drinking Smirnoff Ice. He’s already 1-0 up on grounds, and don’t I know it. 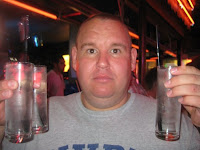 It’s Saturday morning 5.30am. The Groundhopper is restless and rises early. I amble down the garden to let Finley our rabbit out his cage. Even he is miffed that I’ve woke him up.

I’m outside White Van Man’s house. He was going to treat me to a ride in the white van but his alternator has packed up.

We’re in the Rolls Royce (Mondeo) and heading towards the Monkey Tree in West Bridgford for a full English. I can hardly move after I’ve demolished a huge plate. The barman is from Hull and is intrigued as to why we should do a 180 mile round trip just to watch a friendly. WVM can’t take his eyes off the gorgeous waitress. There’s just time for a visit to the Co-op for a couple of bottles of water to quench our thirst and cool WVM down. 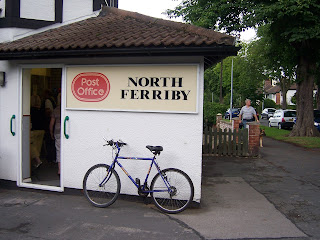 We’re on the M18 heading north east. WVM has a messy night in Nottingham organised. His ringtone - ‘I Want To Give You Devotion’ by Nomad, is constantly playing. Bruiser phones up to enquire on whether Heart FM is on the car radio. My answer is unrepeatable. We’ve Vernon Kay spinning a few toons on Radio 1. All is good.

WVM is retelling tales of his weekend in Albufeira and his gay night out at Wembley watching Take That. He’s terribly overexcited about a 4.30pm massage he has booked tomorrow. I’ve missed his company during the summer. 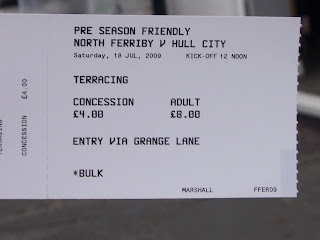 We arrive in North Ferriby an hour before kick-off. The only way to buy tickets is to visit the local post office. I rang up yesterday and pre-ordered mine. WVM snucks in, whilst I hang about outside playing around with my new Sony Dictaphone.

A couple of young boys ride past on bikes with Manchester United replica shirts on. A guy has his head under the wheel of his car checking his tyre pressure.

The village is mobbed with Hull City fans. We pay £8 for our tickets. I shell out £2 on a decent programme and a further £1 on the raffle. I’m determined to break my duck on winning a raffle in the fourth year of trying. 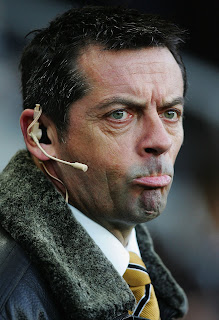 They’ve had two days of relentless rain up here but the pitch is lush, green and looks to have been recently returfed. Hull City reserves play at Church Road perhaps the Tigers help with the maintenance of the pitch.

North Ferriby lies on the north bank of the Humber Estuary and is 8 miles west of Hull. It has a population of 4000. Famous ex-residents include: ant-slavery campaigner William Wilberforce and Tigers’ manager Phil Brown. 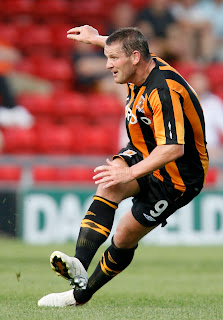 The parish council website reports that there’s been ant-social behaviour at the skate park. If you can make it there’s a meeting at the village hall on Monday 20th July at 7.30pm to discuss this impending matter. Tea and biscuits will be provided. I’ve sent my apologies as I’m at the Lincoln v Arsenal game.

Kingston upon Hull is in the East Riding of Yorkshire and has a population of 250,000. The German Luftwaffe inflicted widespread damage to the city during the Second World War. Despite the fishing industry being on the wane, its port moves over 13 million tonnes of cargo a year. 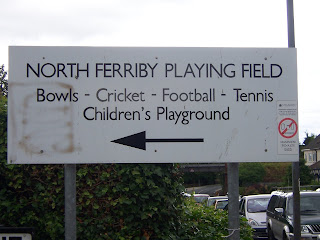 Hull is the home of the award-winning The Deep aquarium. It also has strong musical roots. Bands and artists with connections to the city include: The Housemartins, Everything But The Girl and Roland Gift from the Fine Young Cannibals. 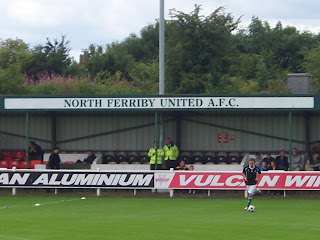 North Ferriby United were formed in 1934. They reached the final of the FA Carlsberg. Vase in 1991. A 3-0 defeat to Whitby Town didn’t spoil their day. Church Road is a modern ground but lacks the character of near neighbours Goole AFC’s Victoria Pleasure Grounds. Although there is a cracking view of the Humber Bridge.

The queue at the ‘Tuck Shop’ is phenomenal. WVM and I have a raging thirst and are keen to test the tea out but there’s Bob Hope of that.

Hull City manager Phil Brown and his lieutenants Brian Horton and ex Mansfield Town manager Steve Parkin are standing in the middle of the pitch chatting. Their season entered into freefall following a sensational start. Premiership status was retained by the skin of their teeth on the final day of the season. They hardly covered themselves in glory in the infamous ‘Fabregas Spitting Affair.’ 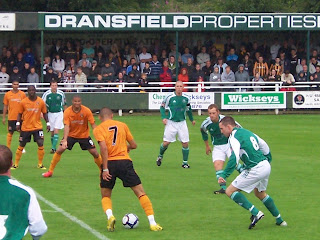 The Sky TV cameras are here and so is a Bentley that squeezes past WVM and I. The owner heads towards the stand. A North Ferriby player launches a ball towards the Bentley, only a one-handed save from The Groundhopper prevents serious damage to his vehicle.

I may have found the best DJ of the season already. He churns out ‘Friday I’m In Love’ by The Cure, ‘Love Will Tear Us Apart’ by Joy Division and ‘Waterfront’ by Simple Minds. All thoughts of him winning a Sony award vanish when he plays a Lily Allen track.

White Van Man is in a full, high state of ‘gripper’ alert. He’s frothing at the mouth at the procession of northern beauties parading past him. He fails to spot the best one though. Sadly she’s a police officer. 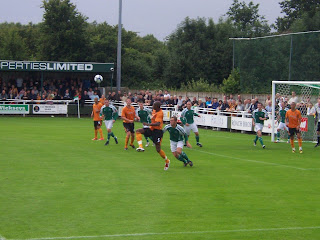 The game finally kicks off. We’re greeted with a short, sharp shower. Phil Brown has agreed to play two different sides. They look strong in the opening exchanges. Turner, Mendy, Boateng, Cousin and Fagan all start.

North Ferriby play some neat football but have no end product. They’re a small, young athletic bunch. The Tigers of Hull tower over them.

Craig Fagan has already hit the woodwork when Hull finally take the lead in the 35th minute with triallist Jerome Thomas cutting in from the left to fire the ball home. For all their possession and showboating they only carry a 1-0 lead into the break. 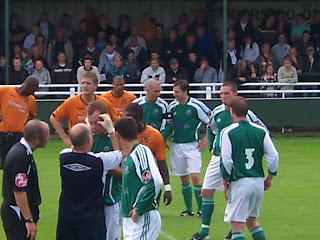 We wait with anticipation for the raffle draw but once again are left disappointed. My tickets are the wrong colour and I’m nowhere near.

A younger, more eager Hull City turn up in the second half. They up the tempo. Local boy Nicky Barmby leads by example as does Republic of Ireland international Kevin Kilbane.

Nineteen year old Dubliner Jamie Devitt doubles their lead early in the second half following some spillage by the North Ferriby ‘keeper. They begin to run riot. Youngster Nicky Featherstone slides the ball home following a through ball by Barmby. Caleb Folan makes it 4-0 from a corner. 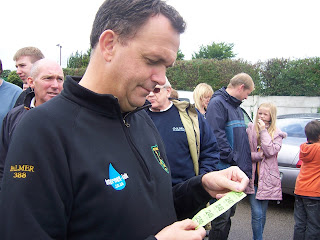 We’re ready for the off now. Nothing is going to top seeing that WPC parading up and down the terrace. Further goals from Barmby and Folan complete the rout.

A cracking day out. New ground number one for the season, 39 to go. Eh Mrs P?

Attendance: about 2000
Man of the Match: WPC Humberside Constabulary. (And it’s not often that Groundhopper has a good word to say about Plod)
Posted by Sticky at 8:04 AM

Just one ammendment to your blog.....City reserves & the game was actually played at North Ferriby's CHURCH ROAD ground, not Grange Road or Grange lane

Another point Hull is not in the East Riding of Yorkshire, although North Ferriby is.

Another point Hull is not in the East Riding of Yorkshire, although North Ferriby is.