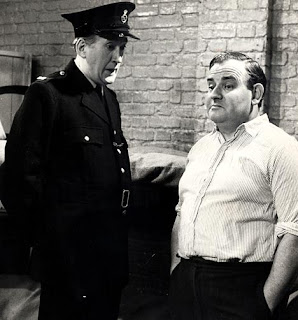 I really should be scouting for boys this weekend but the inclement weather of late has put paid to that. By Friday night nearly every council owned recreation ground has cancelled fixtures for the weekend. With a washout predicted for Sunday also, I’ll probably pop down the Academy and watch the U11s versus MK Dons. I’m scout co-ordinator for U11s and U12s so I need to know what we’ve got and where we need to improve.

It’s Saturday morning and I’m doing as many chores as possible to keep Mrs P sweet. I’ve cleaned the bathroom, tidied out my den and sorted all my wardrobes out, but all the time I’ve one eye on the Central Midlands website, checking for any news from The Fieldings, the home of Sutton Town AFC

I ring the ground at midday to be told the game is on. I’m astonished, as it has bucketed down with rain in south Notts for three days now. They are calling games off in their droves on the excellent NSL message board.

Mrs P knocks up a cheese and ham toasty, and I must have been a good lad because she also produces a cream iced bun. 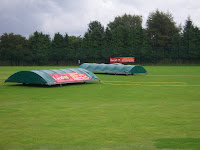 It’s 1.20pm and I decide to head off. White Van Man texts in to tell me he’s on the running machine at ROKO Gym, and he’s watching Magdala Reserves out the window. The only time I’ve ever seen him run is to the front of the queue when the chip shop opens at 5pm on a Friday.

The Taxman is watching his lad play and The Nuclear Scientist is in Israel on business. It’s just me and Sally Gunnell, once again on the A60.

I’m on Clifton Bridge and I’m listening to Radio Nottingham. The disc jockey is playing ‘When I Need You’ by Leo Sayer, it’s bloody awful. I feel like driving the car off the bridge and into the Trent it’s that depressing and cheesy. 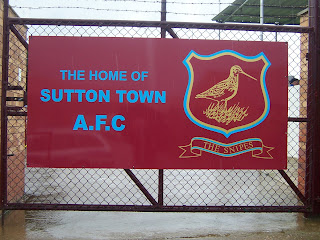 I’m just outside Sutton-in-Ashfield and the black clouds are gathering. There’s one hell of a rain storm looming. As usual I’m lost. I park the car on a cul-de-sac. It’s pelting it down with rain. I dive into a kitchen shop. I’m dripping wet. The shop assistant looks at me gone out. “Don’t worry love I’m not buying a kitchen, but do you know where the ground is?” She hasn’t a Scooby Do and neither does a young chav I chance upon on the street.

I’m in a bit of flap now, no-one in Sutton has heard of the ground. Eventually a slurring skinhead with an earring through his nose points me in the direction of Huthwaite.

I throw a left hand turn into The Fieldings, home of Sutton Town AFC, formed in 2007. I park at the back of Mansfield Hosiery Mills Sports and Social Club; there’s ample room. 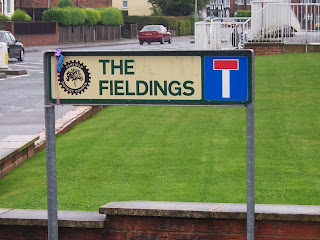 It’s a surreal place for a football ground. It’s completely surrounded by modern houses. Entrance to the ground is limited to one side.

I’m greeted by programme editor Anton Lancashire, who is doubling up as a match day steward. He’s telling me I missed a stormy encounter the previous week. I’d read about it on Beardy Malc’s ‘On the Road’ blog. It was a seven goal thriller against Yorkshire Main. There were countless bookings, two early baths and an injury-time winner for the Snipes. Prison officer Pete Stubley scored a hat-trick; sadly he’s on duty for Her Majesty this afternoon.

Sutton-In-Ashfield is 4 miles west of Mansfield. Its claim to fame is that it has the largest sun dial in Europe. 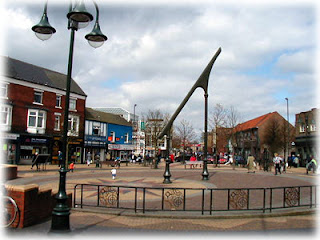 Coronation Street’s Peter Barlow played by actor Chris Gascoyne was born down the road in Huthwaite. As you probably know his dad Ken is the most boring man in the world. But who could fault him for wanting to write a novel, rather than staring at old turkey neck Deirdre.

I nearly fell off my chair the other night whilst watching ‘Coro’ with Mrs P. Everyone piled back to Liam’s house for a party. They were all dancing to the classic track, Temptation by New Order. Mrs P was unmoved by it all.

Former Mansfield Town captain Jake Buxton was born in Sutton, but now plies his trade for the Brewers at Burton Albion.

It’s all smiles at Sutton right now as they are top of the table with a 100% record. Anton fancies their chances today but I’ve seen a few teams from Rocester’s league, the Midland Alliance, and beg to differ. It will be a severe test for the Snipes. 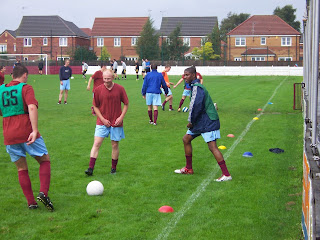 Rocester is in Staffordshire and is 4 miles north of Uttoxeter. It has a population of less than 2000. JCB has its world headquarters in the area. Former Notts County forward Tommy Johnson once played for the Romans. We used to call him ‘The Pale Genius.’ Rocester were formed in 1876.

I’ve arranged to meet Barry Smith, Rocester’s programme editor and webmaster at the break. His codename on the groundhopping forum I’ve met him on is ‘Roman.’

The groundsman has performed a miracle to make the pitch playable. The referee has travelled down from South Yorkshire at 10.30am for a pitch inspection There is a small amount of surface water and it is squidgy and squelchy. 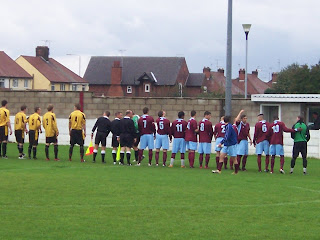 I’m standing 10 metres to the right of the home dugout. The guy next to me has come from Chesterfield. His son normally plays but is on holiday today.

Rocester lose the toss and kick up the steep slope. Their tall number ten Lee Bagley drives down the right leaving two defenders in their wake. He hits the ball across the face of goal, and finds left midfielder Liam Sowter lurking at the far post. He makes no mistake. The linesman confirms the goal is inside 40 seconds.

Rocester are rampant and pleasing on the eye. They go further ahead on 6 minutes when Gary Beardsley fires home from the edge of the box following a poor clearance from a corner. Beardsley’s brother Jason plays for D**by County and is currently on loan at Meadow Lane. 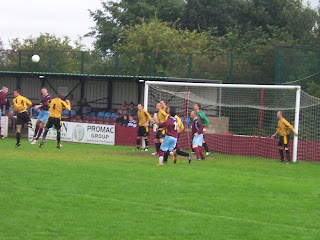 On fifteen minutes the bloke next to me receives a call from his missus; can he nip to the butchers on the way back home and get the Sunday joint?

Rocester have further chances to put the game out of sight. Suddenly Sutton wake up and create chances of their own. The impressive Martin Newman and the industrious orange-booted Danny O’Donnell both spurn good opportunities.

The Romans put the final nail in the coffin on 40 minutes with the goal of the game. They break out from a Sutton corner, Bagley picks the ball up deep inside his own half, shrugging off the attentions of a Snipe’s defender. He plays a slide rule pass to his partner Ben Corr who has made a diagonal run. He races onto it rounds the ‘keeper and slots it home. Game, set and match.

It’s harsh on Sutton, you can’t fault their endeavour and passion but class tells. 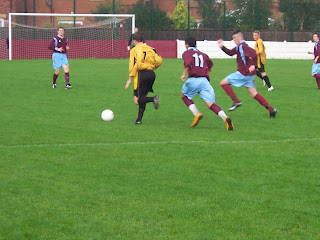 I seek out ‘Roman’ at the break. I feel like Dom Joly and his ‘Red Squirrel’ gag on Trigger Happy TV. “Excuse me are you Roman?” I eventually find Barry; he’s a lovely guy with a passion for the game. He’s a bit miffed at the minute as his power supply has blown up and he can’t update the website.

Sutton up the ante in the second half and play with a bit more belief. Their young captain Luke Shiels is attracting attention from higher league clubs. He gets in good positions on three occasions but his attempts are off the radar.

It’s all over on the hour, once again Bagley is causing mayhem down the Sutton left, he whips a cross in and the unfortunate Dean Hadley can only turn the ball into his own net.

Damien Powell reduces arrears on 64 minutes with a consolation goal. 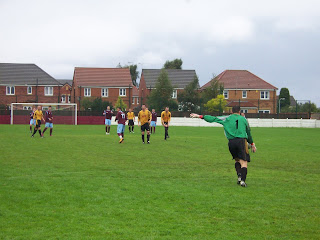 The highlight of the game is on 75 minutes. I'm now standing on the opposite side of the ground and it’s pelting it down with rain. I’ve got the umbrella up and a Sutton defender has just booted the ball into outer space. The ball is dropping out of the black sky directly towards me. I nonchantly put my left foot forward and flick the ball over the wall, directly into arms of a visiting defender. There’s not a scout in sight.

The game is now being played out. Mrs P texts on 85 minutes, can I nip to Budgens and get a ciabatta and a bottle of bubble bath. Tonight I’m conjuring up a smoked salmon risotto, whilst Mrs P puts her feet up in the bath with a Mills and Boon and a glass of wine. I don’t know, a man’s work is never done.

Man of the Match: Lee Bagley
Posted by Sticky at 9:50 AM

no chance fat lad, sticky's doin u good and proper!!

Thanks for the mention!! See no reason why I can't be at Kimberley on Weds... nothing else to do now Big Brother has finished!!

Game is off, Nick... see post by Danny on CML forum