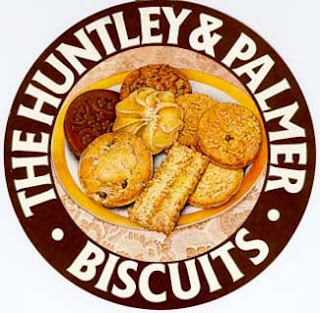 Lynmouth, north Devon, should be one of those places you visit before you die. It’s a delightful village on the edge of Exmoor. It’s more tragically remembered for its river banks bursting on August 16th 1952, which cost the lives of 34 people.

They’ve painstakingly rebuilt their community. We spend an interesting half an hour in the Lynmouth Memorial Hall looking at all the press cuttings and pictures from that dreadful day.

We visited this quaint seaside village last week. Whilst Mrs P and the mother-in-law scoured the dinky shops, ‘The Skipper’ and I took on The Angler and Sticky junior on the putting green. It was all square coming down the last and yours truly was left with a tricky four foot downhill putt. The wind was blowing and the flag was fluttering. I held my nerve. We celebrated with a cream tea. 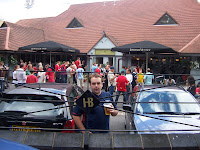 It’s a 1.15pm kick-off at The City Ground today. I’ve already got two tickets but ‘The Skipper’ announces that he wants to come too. I scurry off down the ground two and a half hours before kick-off. Reading fans already mill around outside the main gates.

I race back home to pick up the boys and watch them narrowly beat Attenborough at cricket.

We park in West Bridgford Library. There’s a splendid blue sky filled with glorious sunshine. We stroll past the awful Fire & Ice, there’s not a Bridgford wife in sight. 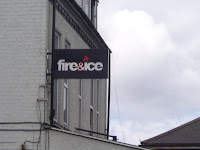 I’m taking a couple of photos outside the Larwood and Voce pub, when an ex work colleague shouts me over. We both agree that there won’t be much in it today. Sticky junior says he’ll settle for a 0-0.

Reading is in the county of Berkshire, 40 miles west of London. It is considered one of the biggest towns in England and has a population of 150,000. It‘s twin town is Dusseldorf in Germany.

White Van Man and The Nuclear Scientist will be delighted to hear that their favourite culinary establishment the Little Chef opened its doors for the first time in the town back in 1958. Bill Gates’ mob Microsoft is a major employer in the town. 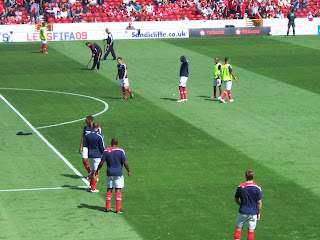 On our charity football tour of all the grounds in England and Wales, Neil Webb very kindly donated some old NFFC tracksuits for our cause. Unfortunately we arrived at the Madejski Stadium at 3am and all the lights were out.

We’re sat in the Main Stand ‘F’ Block. We’re surrounded by WAGS and injured players. Nathan Tyson, also born in Reading, and his family sit behind us. Andy Cole and his father sit three seats down from the boys. They are overawed by it all.

I notice that Peter Davenport is guest of honour today. He joined the Reds back in 1982 arriving from my all-time favourite Non-League club Cammell Laird in Birkenhead It’s hard to imagine him and Cole sharing a pot of tea for two and a plate of complimentary Rich Tea biscuits at the break, as they have previous. Read Cole’s autobiography. 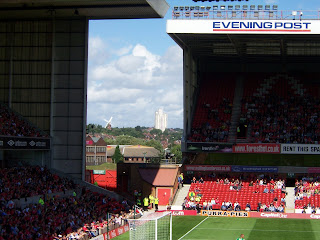 Ironically Reading were nicknamed The Biscuitmen before the closure of the Huntley and Palmers biscuit factory in the 1970s. They then changed their name to The Royals.

Steve Coppell has hung onto his employment at the club following last season’s mid-season slump. Four wins in the last eighteen games sent them tumbling into the Football League Championship, and one of those was at The Sheep Dip, so it doesn’t really count. Coppell's a decent human being and I hope he repays their faith in him.

There have been a few outgoings, with the only new arrival being Stephen Hunt’s younger brother Noel from Dundee United. They still have 40 squad members named in the programme though.

Forest have injury problems today and are a little light up front; Tyson Cole and Anderson all miss out. 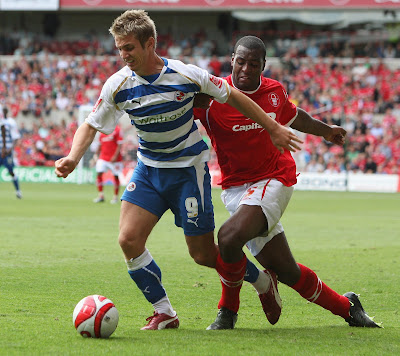 I’m sat next to Forest substitute Matt Thornhill’s parents. I ask his dad how long his lad has been at the club, he replies since the age of fourteen. He signed from Pelican Colts.

There’s nothing much happening in the first half. Forest keep possession well and could have scored in the first few seconds, when the ball finds its way to Cohen on his weaker right foot and the chance is wasted.

Le Grand Fromage, Guy Moussi, is orchestrating proceedings in the centre of the park. His first touch and movement are better than anything on the field. He’s never afraid to shoot from distance.

Influential Royals’ midfielder, the Czech, Marek Matejovsky, is stretchered off before the break following a clash with James Perch. Reading retreat into their shell and are happy to soak up the pressure. 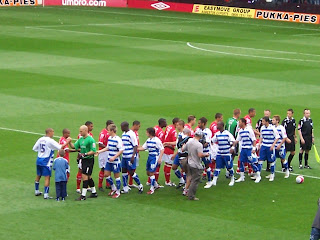 Robin Hood and the Royal Marines abseil down the Brian Clough Stand and we are treated to some armed combat. I’m fully expecting Bennett and Morgan to sneak out the dressing room and give us all an exhibition in arm-wrestling.

Forest begin to move the ball around quicker and slicker. They have a ten minute purple patch, with Moussi still pulling all the strings. Unsung hero James Perch sits in a disciplined role, protecting the back four, mopping up any stray balls, allowing the Frenchman the freedom of the park.

Player of the season Julian Bennett improves with every game, Reading struggle with his strength and determination. 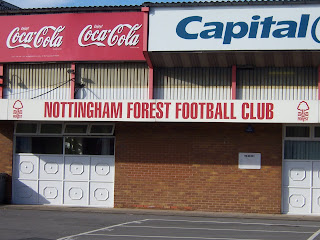 Reading’s American international goalkeeper Marcus Hahnemann has not particularly floated my boat. He rarely comes out to collect a cross, relying instead on his giant defenders to knock away and head the endless corners and crosses coming in from both flanks. When he finally does come it’s a case of ‘Beadle Hands’ and he’s fortunate to hear the referee's whistle.

Wesley Morgan has been on top of his game this afternoon and, for most part, has snuffed out the attentions of Republic of Ireland striker Kevin Doyle, who has spent a majority of the time bouncing off the big fellow. For once he shakes off the big man, heading a Stephen Hunt cross goal wards, only to see Forest ‘keeper Paul Smith brilliantly tip it onto the bar.

Lewis McGugan is subbed close to the end, following an act of petulance, which results in a yellow card.

Arron Davies is withdrawn in the dying moments too; he’s not had the best of games and looks in need of a good meal. “You should have done that half an hour ago Calderwood” shouts the bloke behind me. It’s harsh. He’s had to switch wings throughout the game and has given his all.

Neither team can break the deadlock, as the defences come out on top. Reading are workman like and look nothing special.

Nottingham Forest will fear no-one and will welcome back the injured and wounded.

Man of the Match: Wes Morgan
Posted by Sticky at 8:49 PM

nice report, come on the reds

Don't wan to jump on tHE mOOSE BANDWAGGON JUST YET. eARLY DAYS.

wASSupp wiTH yOUr keYBOARd stICKY?

part time ground hopper thats what you r no games this weekend WEAK .