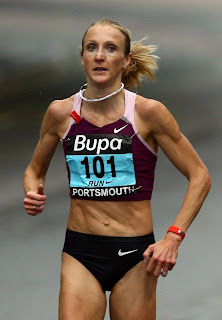 It’s Sunday February 5th. Sticky Palms is 48 years old today. I’m in the lounge unwrapping presents and opening cards. I get two Smoove and Turrell CDs, some Amazon vouchers, a back massage and some cash. There’s no Murphy Palmer, the green and canary-coloured budgie to report on folks. That dream is well and truly dead in the water.

Fast forward the clock to 4.30pm. Gangsta and the crew are round our crib. We’re having a few beers and soft drinks, whilst watching Super Sunday between Chelsea and Manchester United. There’s nothing much going off in the game. A girl catches my eye-line out of our front window. It looks like Emma from work. Maybe she has a friend that lives up the road.

Wendy, Gangsta’s mum, shrieks that ‘The Reaper’ is outside. I leap off the sofa and dash to the front door. No way folks, no way. ‘The Reaper’ is carrying a cage. It’s Murphy. It’s Murphy. Whey hey. Mrs P has a face like thunder. She’s in on the act. They’d all cooked up a cunning plan a few days ago. I had no idea.

Murphy scurries along the bottom of his cage. I’m mesmerised and can’t take my eyes off the wee man. ‘The Reaper’ has bought the exact specification. He’s eight weeks old, from Handsworth in inner city Sheffield and he’s beautiful. I sit with him for the rest of the evening. Mrs P can watch Dancing on Ice. In fact Mrs P can watch whatever she wants from now on. I’ve got my boy, after a two year campaign. 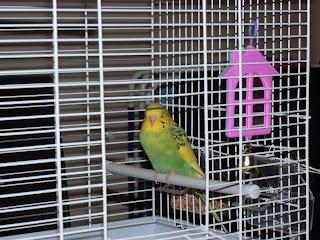 It’s been nearly a month since I last saw a Non-League game. I went to Nottingham Forest two weeks ago, the game was awful. I can honestly say I didn’t enjoy it. I crave for the semi-pro game. The weekend sees the entire county of Nottinghamshire wiped out by the freezing conditions. Even Real United v AFC Hucknall in the Central Midlands League is a victim of the ‘Big Freeze’, despite it being held on a 3G surface in Wilford.

Saturday morning is ironically spent trudging around the streets of Loughborough with Mrs P. We weave in and out of the stalls on the market place and end up drinking posh coffee and quaffing homemade scones at Tylers Department Store, on Carilion Court.

I go on a long walk with ‘The Angler’ in the afternoon, which ends up in the public bar of The Plough Inn at Normanton-on-the-Wolds. I enjoy a pint of St Austell ale as the half-time scores pour in.

Sunday is the highlight of the weekend. I leave Murphy’s cage door open on purpose. Within two minutes my feathered friend has collided into the Venetian blinds and got all tangled up on his first flight. But he is hard, my friends. He dusts himself down and settles on the clothes horse. Tempted by some Millet he’s soon back safely into his cage. 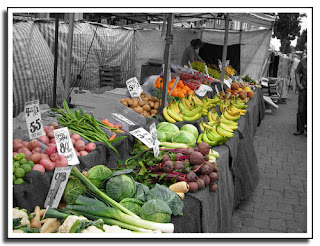 It’s Tuesday morning. ‘The Reaper’ reports on yet another celebrity death. The one-armed Irish pot washer, ‘Albert Riddle’ from Robin’s Nest (David Kelly) has died at the age of 82. I share a caramel slice over a cup of tea with ‘Shifty Edwards’ while I digest this news.

Before heading for the match I train Murphy to eat some millet spray from my hand. I bolt down by meat balls and spaghetti and head out the door just before 7pm.

I’ve rigged up the Sat Nav as it has a useful shortcut through Loughborough town centre. I’ve visited the Nanpanton Sports Ground many times before. I scouted my first ever youth player for The Pies from Loughborough Dynamo.

Mark Pougatch is reporting live from Upton Park at the Championship top of the table clash between West Ham United and Southampton. Five Live talk to Roddy Forsyth about the recent demise of Glasgow Rangers. It is being reported that they have entered administration. I have little sympathy for the club, when you hear of wages being paid out and PAYE tax not being declared from offshore banking accounts. ‘The Taxman’ and his cronies have finally caught up with them. 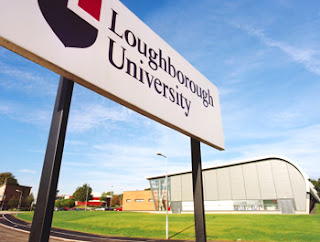 Bloody hell, I’ve missed the ground. I re-programme Sat Nav, type in Watermead Lane and arrive in less than two minutes. The car park is packed. Big guns Gresley FC are in town.

Loughborough has had a university since 1966, but the institution dates back to 1909. It has a track record for producing top class athletes. Notable alumni include: Steve Backley, Sebastian Coe, David Moorcroft and Paula Radcliffe. England cricketers Monty Panesar and Chris Read have also studied there. Former Arsenal goalkeeper Bob Wilson is their patron.

Notable students who have gone on to play in the professional game include: Bradley Pritchard (Charlton), Lawrie Sanchez (Wimbledon) and Leon McSweeney (Hartlepool).

It’s £4 on the gate. The programme is £1 and proves to be excellent value. There is a page on all four teams that the university run. I met a guy on a course recently who is a student at the University. He says they are well coached but over-do it a wee bit. 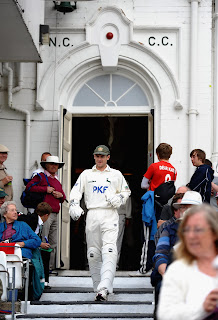 The air is still, there’s a slight chill. You can hear the traffic in the distance roaring down the M1. We are warned by the PA announcer not to stand at the top of the grass bank as set out by FA guidelines. Shame that, I enjoy the panoramic view up there.

Ooh heck, I’ve positioned myself next to some strange old proper hoppers. They’re not particularly interested in engaging conversation with Sticky Palms. They discuss the African Nations Cup, Manchester United and Alex Ferguson. For one minute I thought I’d tuned into talkSPORT.

I leave them to babble on. Sticky’s date for the night has turned up. Gaz Hateley, in the nets for Gresley, is sporting a silky short-sleeved little number for Sticky. We arranged our rendezvous on Twitter. Not a hair is out of place. If I was a gambling man I’d say he uses VO5 mega-hold styling gel. He must look in the mirror more than Murphy Palmer the budgie. Gaz is fresh from his 5pm appointment at a tanning salon in the town centre. He looks like he’s about to walk on the set of Baywatch, rather than diving around a chewed up playing surface. 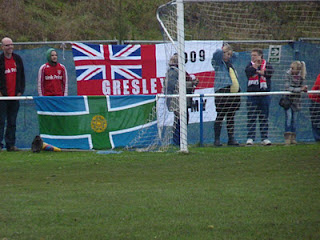 Gaz is soon bending down to pick up a ball that’s nestling in his net after one minute, following good build-up play and a fine strike by Jack Beckett. Hateley is incandescent with rage a minute later when Beckett waltzes through four flimsy challenges, Gazza- esque, to fire home my goal of the season.

The normally cock-sure away following are left dumbfounded. Fans and players alike appear to have their eye on Saturday’s FA Vase 5th round tie at St Ives in Cambridgeshire. Gresley’s confidence is crushed. The ball playing Jepson and Holmes in midfield misplace passes and get caught in possession. The Moatmen look a tad ring rusty. The Uni, on the other hand, play some champagne football.

The visitors get about the students – roughing them up some would call it. Gresley are gifted a goal from the penalty spot following pushing from a corner. Royce Turville smashes the spot kick straight down the middle. Parity is restored on the stroke of half-time. A cross from the right strikes the hand of a defender. Turville makes no mistake.

I climb the concrete steps, past the tip-up seats and head into the rickety old clubhouse. A man at the food hatch is pouring cups of tea from a stainless steel pot. I rub my hands with glee. “One tea please” I tell a small boy who is helping his dad in the kitchen. He ignores the pot and pours scalding water out of an urn, onto a tea bag and into a cup. I’m seething with rage that I’ve missed out on a proper brew. In our house he’d have been sent straight to bed.

Talking of bedrooms, Sticky Junior’s will be getting a good trashing as reports come through from the Riverside Stadium that NFFC have gifted ‘Boro’ a goal on 44 minutes. 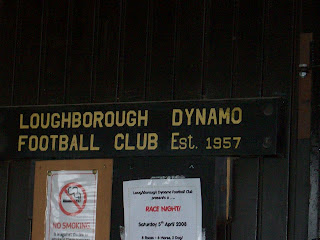 I’m back outside halfway up the grass bank (sod it). Gresley look a different team; well they are, Rob Spencer has replaced Marc Goodfellow as the Moatmen go 4-3-3. Hateley makes a vital block in the opening moments.

On 50 minutes Gresley are awarded a free kick. James Jepson takes a longer run up than Steven Finn, Lowton does well to parry his piledriver, an alert Tom Betteridge slams home the rebound.

Gresley are rampant. The industrious Dean Oliver wraps up the game with two goals. The first a fine finish, the second a gift from goalkeeper Lowton.

Man of the Match: Dean Oliver
Posted by Sticky at 1:22 PM

Very enjoyable blog and the lad Murphy looks a beast in that Norwich kit!