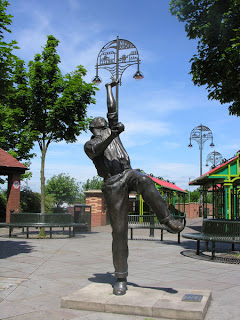 We met on an autumn evening at Causeway Lane, the home of Matlock Town FC. I was stood with The Taxman and he was with ‘Screats’ Dad. We live in the same village but were somehow acquainted 30 miles away. It quickly became apparent that we shared a passion for the non league scene. It was the perfect combination: I enjoy the beautiful game and he enjoys the half-time tucker.

But now my relationship with White Van Man is in tatters. What he has done to me is unforgiveable. How could he do it? I feel sick, repulsed and angry. It’s broken me. He’s only phoned-in to the worst radio station in the world – Heart FM – to speak up for them pair of potato pickers off the X-Factor – John and Edward (Jedward). He was live on the airwaves and called himself ‘David from Keyworth.’ Shame on you WVM! 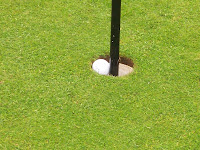 I took ‘The Skipper’ on the Par 3 at Edwalton Golf Course. He proper got the hump as Sticky Palms burnt the course up like Tiger Woods. I made par at the 4th, 5th, 6th & 7th and chipped in twice off the green. It made the Chicken Legend at McDonalds, after the game that little bit more enjoyable.

It’s Saturday 8am and The Groundhopper has the hangover from hell. I appreciate how Trumpy Bolton must feel every morning. I was in West Bridgford last night at a real ale house called the Stratford Haven. I over-indulged in guzzling copious amounts of Golden Wunder bitter from the Thwaites brewery in Blackburn. 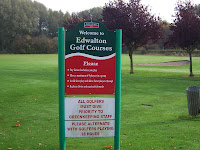 Mrs P had kicked me out the house because she was having a girlie night. Allegedly it was a strategy meeting for their impending weekend in London( no groundhopping that weekend readers). In hindsight I’d have been better off sharing a table for two in Finley’s hutch.

I staggered onto the 11.30pm bus from Trent Bridge. There were one or two exuberant Leicester fans on the back row celebrating their second away win in less than five days.

I’m committed to being in Sutton-in-Ashfield on a scouting job by 10am. It’s going to take more than two poached eggs to crank me up today. 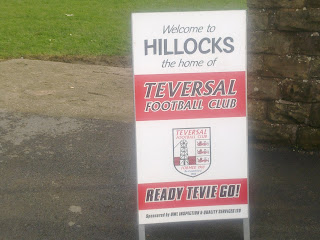 I’m driving up the A60 chuckling away at the Danny Baker Show on Five Live. Baker is asking folk to phone in if they’ve ever been inside a football managers’ house. I immediately phone JK as he once went to Walter Smith’s gaffe in Glasgow and disturbed him from his painting and decorating. Walter even invited him in for a cup of tea. JK tries to phone the show but can’t get through.

I watch an under 8s and under 9s game in Sutton-in-Ashfield. The kids play the game with a smile on the face. Both games are quality. I really enjoy it and invite a couple of boys to come in and train with Notts County. 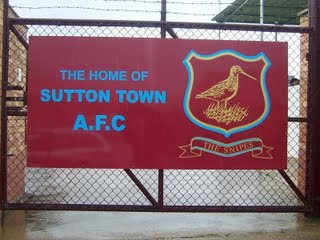 It’s been a good morning’s work. I pop into The Fieldings, the home of Sutton AFC. Mansfield Town u18s and Notts County u18s lock horns. The Stags score an injury time winner. It’s somewhat took the gloss off the morning.

I drive up to Kirkby-in-Ashfield. I’m in the Rolls Royce and have bags of time on my hands. I swing into a Tesco Express to buy some lunch. My headache and upset stomach are a distant memory. I grab a chicken Caesar wrap and a bottle of Oasis orange. 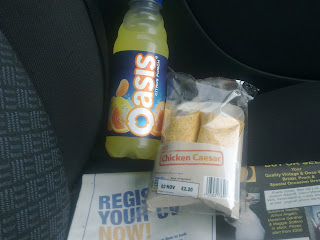 Within 50 metres of the shop is a huge Co-op which I’d somehow failed to spot. I perform a u-turn and head back towards the Summit Centre, which is a not for profit community enterprise, developed by the East Kirkby Welfare.

Kirkby-in-Ashfield is a market town in Nottinghamshire with a population of 25,000. It was once at the heart of the Nottinghamshire coalfields. Most of the collieries were closed in the 1980s. 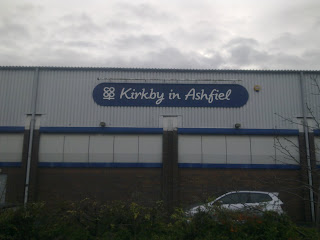 Famous people from the Kirkby area include: former England fast bowler Harold Larwood (there is a statue of him in the town centre), Chris Gascoyne, who plays born loser Peter Barlow in Coronation Street (he went to school in Kirkby), former Middlesboro defender Stuart Boam, and ex QPR and Everton winger Dave Thomas (socks always rolled down).Labour politician and former defence secretary Geoff Hoon is Member of Parliament for Ashfield.

I park the car and take a walk back up the road to the main drag. The housing estate close to the ground is modern and yet already a house is boarded up and plastered in graffiti. A pit bull terrier comes tearing up the drive towards me. Thank God I didn’t bring Finley with me. 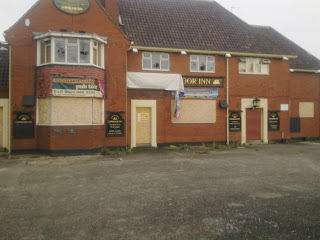 A youth roars up and down the cul-de-sac on his trials bike. The Lowmoor Inn, on the main road, is boarded up. Local youths tried to burn it down a few nights ago.

I take a wander inside the Summit Centre. It’s clean, spacious and has a vibe. The urinals are manufactured by Armitage Shanks – it’s always a good marker in my eyes.

Unbeaten Louth Town are today’s visitors. It’s the capital of the Lincolnshire Wolds and has a population of 15,000. 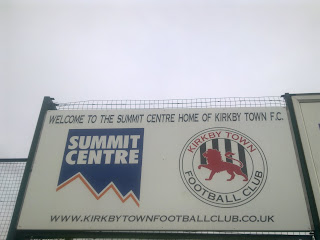 I take a position to the left of the home dugout. I’m joined by Tony Cook, who is a coach at the Nottingham Forest Academy. He’s on good form as Forest Youth have slapped D***y County under 18s 6-3.

The game has an edge to it and is played at a good tempo. Louth play a passing game, whilst Kirkby look for the runs of the muscular Bramwell, who’s struggling a wee bit after being bed ridden for a week with a virus.

There’s a bit of a commotion on ten minutes when Tony receives a text from his missus asking him whether he’s fed the fish or not. 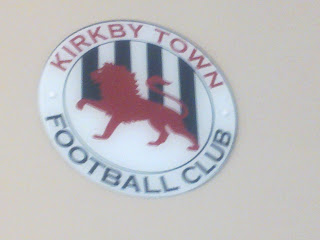 I’ve already clocked the idiosyncratic behaviour of both managers, particular the lunatic from Louth. He looks to be capable of bursting more blood vessels than Billy Davies and Stan Ternant put together.

Kirkby take the lead after 20 minutes after evenly balanced opening. A well worked short corner finds Hudson on the edge of the box. He whips in an inch perfect cross for Roebuck(I used to work with his dad Malc) to force home at the second attempt. The Louth manager is in need of medication. He has a rant at the officials and retreats to the dugout. 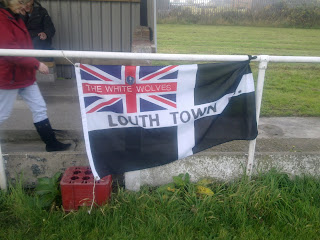 Louth spurn the game’s best opportunity shortly before the break with their number 7 forcing a brave block by an alert Paul Stanhope in the Kirkby goal.

Bramwell is fortunate to stay on the field of play on 45 minutes having kicked out at the Louth skipper. Louth manager Paul Walden is incensed that the ref only brandishes a yellow card. He has another temper tantrum and ends up being sent off himself.

It’s been action-packed and I’m looking forward to my cup of char. I hunt down Kirkby Town legend Fred. He’s Kirkby’s Jack-of-all trades. He’s very kindly gave me the lowdown on this very friendly club. 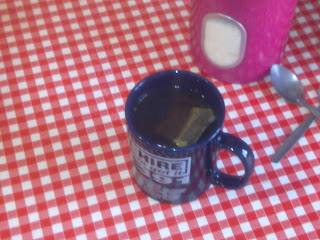 I’m introduced to his friend Roger Rann, who scored over 200 goals for Arnold Town in the 1970s. I’m shocked to hear he wasn’t invited to the official opening of their Eagle Valley Ground yesterday.

Fred won't pose for a photo. He says with it being Halloween and all that it might scare the kids. I tend to put on old Peter Beardsley DVDs to frighten my two lads.

I’ve been that busy chatting that by the time I’m back pitchside Louth are already 2-1 up. It’s the first goals I’ve missed in years. Striker Paul Watts has bagged a brace.

Louth have a spring in their step and are helped further in the 65th minute when the referee is left with little alternative but to red card Fletcher for pulling back the Louth forward. The White Wolves can’t put the game to bed and miss a string of chances. 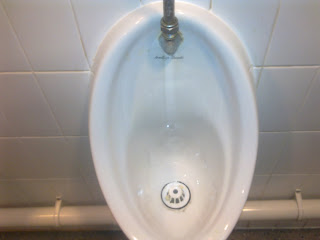 Kirkby pull together and play as a team. They have hearts as big as buckets. Carl Haslam is their big cheese. His feet are on a par with Sticky junior’s. He glides through the visitors’ defence and just fires over. He then picks up the ball, evades three desperate lunges but his final shot is beaten away by the Louth ‘keeper.

Louth are reduced to ten men when Haslam is hauled down following another mazy run. He dusts himself down and blasts home the spot kick. It’s the straw that broke the camel’s back for the Louth manager. He flies round to the back of the goal, has an altercation with the League chairman and resigns on the spot. He was last seen stomping towards the Kirkby Co-op. Fair play though Paul, they’ve some good two-for-one deals on there. 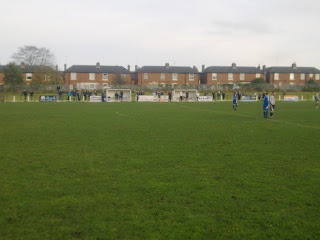 Kirkby manager Brett Marshall has a final throw of the dice and flings on a couple of subs. One of them is Scott Pratt, whose father I’ve been talking to for most of the afternoon. Deep in stoppage time Pratt picks the ball up 40 yards out. He knocks the ball out of his feet and pings it towards the Louth goal. The ball begins to gain momentum as it sails through the darkening north Notts skies. The Louth ‘keeper frantically begins to back pedal. He ends up on his backside as the ball crashes into the back of the net. It’s Sticky Palms’ goal of the season.

Pratt’s dad runs uncontrollably up and down the grass bank behind me. It’s like his lad has scored the cup final winner at Wembley. Manager Marshall totally loses the plot. He weaves in and out the touchline. His beetroot face is as red as his tracksuit. It’s like watching the Benny Hill Show as the entire Kirkby team chase an energised Pratt.

And all I can think about is Louth manager Paul Walden. He’s missed the goal of the season.

Referee 8 out of 10. Loads of moaning from Louth. Played lots of advantage.
Posted by Sticky at 6:47 PM

Watch some of the best soccer/football videos on the internet at www.footballclips.net (or) Football Clips

Its updated on a daily basis.

Was the 'cage fighter' playing for Kirkby ?
Didn't look like he could fight his way out of a bird cage from what I saw when he swung handbags with the Keyworth number 7.

Nice blog Sticky. I want to know who Malc is as i always thought my dad was Terry Roebuck. Do i need to be asking my mum a few awkward questions?

Hmm .. Sorry Steve. Used to work with a guy called Malcolm Roebuck at Calverton. Was sure his lad Steve played at a decent level.

As for the cage fighter, well he stood next to me and seemed a very decent chap.

﻿This design is stellar! You certainly know how to keep a reader
amused. Between your sense of humor and your videos,
I was almost moved to get started on my own blog (well, almost.
..HaHa!) Excellent work.

Feel free to surf to my blog post ... Shooting Games

Hello There!
I really enjoy your new web-site on Blogger: The Groundhopper and also I will be
back again..
Bye for now!