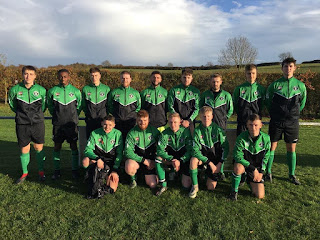 It's the crack of dawn on Sunday 25th November, I've woken up to a banging and clanking of scaffolding being unloaded off a lorry outside the front window. I've no idea where I am. I sit bolt upright. What in good heavens is going off? Where the chuffing hell am I? I retrace my steps, oh, yes, that's right, Ms Moon and I had a night out on the cobbled streets, in the sleepy market town of Ross-on-Wye, in Herefordshire, after watching the Bulls of Hereford trounce F.C.United of Manchester 3-1 - the final score flattered the visitors.

We checked into the King's Head hotel at 5:30pm the previous evening and immediately slumped into posh Chesterfield leather armchairs, next to a roaring fire, in a cosy bar. Sticky Palms was quaffing Wye Valley IPA, Ms Moon was on the bubbles. We ventured out to a posh 'Spoons and a trendy cocktail bar called Leonard's at 39, before having a nightcap at the King's Head. Ms Moon went up to the room with strict instructions to tune the TV in for Match of the Day, whilst I was dispatched down the High Street to hunt down a kebab shop. The next thing I know it's 6am and some complete and utter buffoon is setting up a Christmas market stall outside our bedroom window. 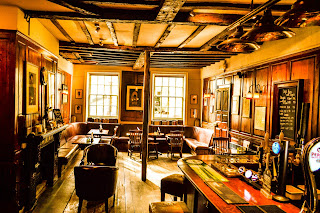 I have a little moan as we check out, about the noise; it's met with a wry smile by the chap on reception. I have a two-hour kip in bed on our return to HQ at just after lunchtime. There's no trot around Nottingham for a couple of real ales - I'm fagged out folks.

Tuesday and Wednesday are spent at the East Midlands Conference Centre, in the grounds of the University of Nottingham, at a customer conference. Ideagen PLC, the company I'm proud to represent, have put on a couple of cracking speakers. I miss Dame Kelly Holmes at the evening gala dinner.  She spoke openly about her battles with depression and self-harming, as injuries threatened her career. I did manage to catch the British TV broadcaster, Royal Marine and marine biologist Monty Halls, who gave a very insightful speech about the interesting and dangerous life he has led, including a one night stay in Nottingham. 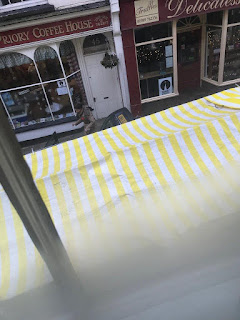 It's Friday evening and the end to another exhausting week. I cross over Carlton Road and swing a left at Tesco, a shop where I'm on first name terms with the girls on the till. I walk up Cavendish Road, the final stretch is so exhausting and hilly that even Holmes and Halls would struggle to kick on and negotiate the 1 in 16 gradient. I struggle up Westdale Lane, still gasping for air. I need to tick off a new micropub on Mapperley Tops called The Blues Dawg. There's a very friendly welcome from the landlord. All real ales are £3 per pint until 6pm. I slip across the road to meet Ms Moon for a quick sociable one at the Woodthorpe Top before settling in for another tortuous evening of TV with the talentless Holly Willoughby fronting the ghastly I'm a Celebrity (grumpy old man syndrome).

I feel like I've been hit by a bus on Saturday morning. When are Tesco going to remove that special offer 14.5% Shiraz from their finest range? I am so excited when I finally freshen up with a shower and a shave. I strut the catwalk (lounge floor) in my new off the shelf Keyworth United tracksuit kindly donated to all the boys by our sponsor Andrew Danzey. Ms Moon is mightily impressed.

I drive across to Keyworth, a village that I lived in for 45 years, a full three hours before kick-off, as there is so much to do. I'm nervous, excited and apprehensive as it's officially my first time in charge of a team in an adult league. Let me tell you the story. 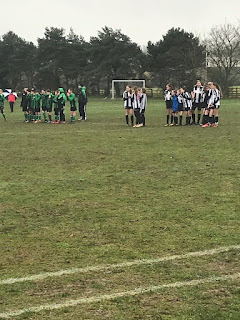 I thought I was done and dusted with coaching when I finally hung up my manager's coat and scouting hat in 2014. Four years later I saw that the Development team was struggling and that the lads weren't enjoying their football. I offered my services to club vice-chairman Mark Ritchie. The plan was to begin the role next season. I was introduced to a guy called Chris Thompson who shared my vision and belief that one day the first team will field a side entirely made up of youngsters who have come through the youth policy. My remit is to find those youngsters and develop them by introducing them to men's football in the Notts Senior League Division Two.

Chris has overseen six wins and a draw in the last seven outings. He's finding it hard to let it go as he has a tremendous bond with the lads, but he already runs two teams as well as a senior role on the committee and overseeing his own business.

I take a deep breath as the 'Rolls Royce' turns into Platt Lane, the home of football. What a lad Chris is. The goals are up, the nets attached, the corner flags slotted in and all the shirts are hung up on coat hangers in number order. I grab a sausage cob from Lucy behind the food bar, before strolling up to pitch four where 'Thommo' is preparing his under 12s for a cup tie with Priory Celtic from Kimberley.. 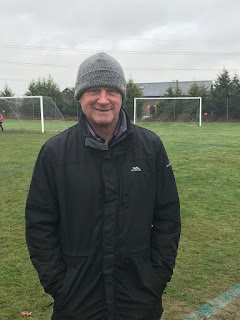 Notts County Girls Under 13s are playing a Keyworth United lads team on the adjacent pitch. I get chatting to a gentleman who mentions he was heavily involved in cricket coaching as a profession until retiring recently. His name is Trevor Tunnicliffe, a steady all-rounder for Nottinghamshire in the 1970s, who made 65 first-class appearances for the county He was a close friend of one of Sticky's heroes, the South African, Clive Rice. We watch an agonising penalty shootout which ends in tears for the Pies. I hope club owner Alan Hardy doesn't ask to see the two coaches first thing on Monday morning.

Some of my team begin to rock up including: Sizzers, 'The Krays', Woody and the 'Keyworth Georgie Best' (aka Sticky junior). We congregate in the bar as I interrogate each and every one of them about how many beers they had the previous night and what time they rolled in. 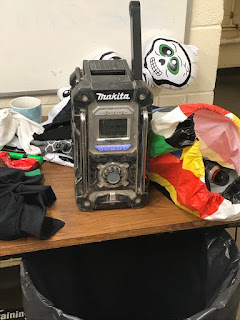 Sticky junior cranks up the toons in the changing room as the boys get pumped up for the visit of AFC Top Valley, a team that has lost one solitary game this season - it's going to be a big test for my young guns. Good news arrives from the Asda checkout on Loughborough Road, our outstanding 16-year-old centre-half, 'Dan' has finished his induction early and is available to play. I'm chuffed to bits that some of the Keyworth old guard have turned up to support us. Legendary managers Dave Fisk and Alan Jackson view proceedings.

I welcome our opponents and referee, before rallying the troops and sending them out to battle. My heart's racing and my blood pressure rising as I stride over to the dugout. The first half is a pulsating game of football. My lads are magnificent, together and play to the plan. After a few early scares, Keyworth's Callum Barratt picks up a loose ball 35 yards out from goal, he hits an outrageous shot which loops and dips over the 'keeper, hitting the underside of the bar, before nestling into the net. I don't celebrate, I just shake my head in disbelief before barking out instructions to Ronnie Kray. 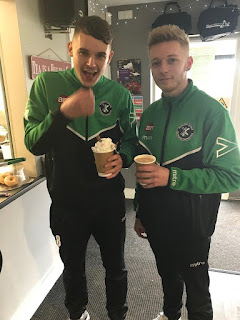 We up the tempo and start to play some champagne football. A cross from the left is turned into the net by Shyan to put us 2-0 up. Incredibly the visitors, who have always been in the game and caused us plenty of problems, sky a penalty over the clubhouse and into the car park, minutes before the break.

Crikey moses, I'm going to have to keep the lads' feet on the floor; it'll go to one or two of their heads. I dish out lots of praise because they deserve it. We talk about the pitfalls and how important that next goal is. It arrives quickly and at the wrong end. Top Valley gain momentum and equalise. I try to freshen things up by throwing three 16-year-olds on. But the visitors are canny and cocksure. They score a brilliant free kick and hit a purple patch before putting the game to bed.

Both teams have given their all, with the game played in a fantastic spirit, superbly reffed by Matt Curtis too. We're all bitterly disappointed in the changing room afterwards, but you learn a lot more from losing than you do from winning. Our next game is in a fortnight, a local derby versus Cotgrave; now that will be tasty.

Man of the Match - Chris Thompson for the last two months
Posted by Sticky at 6:56 PM No comments: