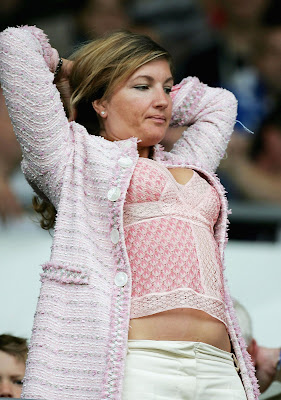 The Groundhopper is once again not flavour of the month. The long-suffering Mrs P is not too chuffed that I’m whisking away Sticky junior to Birmingham City on St Valentine’s Day. I hide my card in the bedroom and find my Valentine’s on the kitchen table. She has wrote in hers “looking forward to the meal you are going to cook tonight!” I have written in mine: “looking forward to the Marks and Spencer’s ‘Meal Deal’ that you’ve bought for tonight”: great minds think alike. I’d bought some flowers the previous evening.

I had offered Mrs P a romantic day out: she could have gone to the Bulling Shopping Centre, whilst we attended the match; sadly, she declined the invitation. I tried readers, but it looks like romance is dead, for the time being. 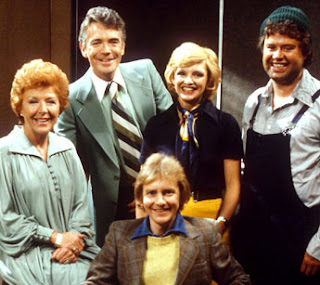 The Ribbon Maker picks us up at just gone midday. There’s no sign of The Accountant, apparently his central heating has gone kaput.

The Flying Pickets track, Only You, is on Radio Nottingham. The headline news is that six lives have been lost in a late-night car accident on the A614, close to the old coal mining village of Bilsthorpe, in north Notts.

We drive down the M42 and onto the A45. Sticky junior is in the back with Josh; he’s excited. It’s his first big away game since Joe Kinnear’s Forest beat Sheff Utd 2-1 a few years back. The Ribbon Maker has never seen Forest secure a League win away from home in twenty attempts. He did break his duck though in the FA Cup win at The City of Manchester Stadium a few weeks ago. 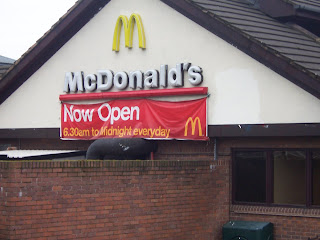 The Ribbon Maker twiddles with the radio tuner; we listen briefly to Beacon Radio and BRMB. Burslem pub singer Robbie Williams is singing She’s the One. I suddenly feel ill and open the window and feel a rush of cold air circulating in the car.

We drive through Solihull and pick up signs for Sparkhill and Bordesley Green. I used to come here years ago with an old girlfriend’s dad. He was a Blues’ supporter and always took me to a pub in Bordesley Green for a pre-match pint. I think it was called The Cock. It’s probably closed down by now. It was the sort of pub where you wiped your feet on the way out. 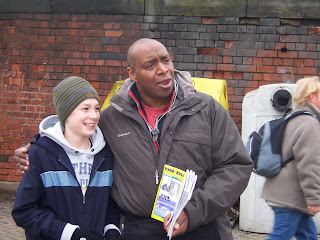 Twenty years ago I stood on the terraces of St Andrews and witnessed a Gary ‘Bing’ Crosby winner in the FA Cup 5th round. Some say Crosby only got in the side because he used to do Cloughie’s plumbing and gardening, but he showed Julian Dicks a clean pair of heels that day.

We’re soon parked up in a secure car park only five minutes walk from the ground: it’s a fiver well spent.

Birmingham is England’s second city. It has a population of over one million. It was a leading force in the Industrial Revolution. It was often known as the ‘city of a thousand trades.’ It suffered heavy bomb damage during the war and had to be redeveloped. The skyline is filled with a sprawling mass of high rise flats. 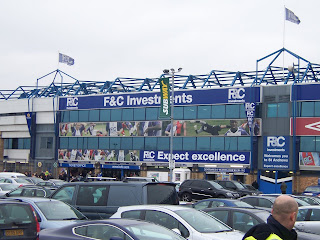 Heavy rock has played a major part in the city. Black Sabbath, Judas Priest and Led Zeppelin are among many bands to have sprung up in Birmingham. Other well known bands include: The Beat, UB40, Electric Light Orchestra, Duran Duran, Dexys Midnight Runners and Musical Youth.

Birmingham is twinned with the cities of: Chicago, Frankfurt, Johannesburg, Leipzig, Lyon and Milan. Famous Brummies include: Enoch Powell, Tony Hancock, Jasper Carrott, Martin Shaw, Gabriel Abonglahor and Spit the Dog. Famous TV shows from the 70s: Tiswas and Crossroads were filmed at Central Studios (ATV) in the city.

The kids convince me to go to McDonalds. There’s a massive queue and it’s mobbed with football supporters. The vibe is good though. 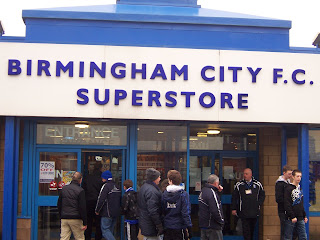 We head up to the ground, passing an old factory that is up for grabs and a deserted Woolworths store. There’ll be no pick n’ mix for the boys today. I decide to stretch my legs and peg my around the back streets looking for a few photo opportunities. One or two people spill out onto the streets from pub doorways but apart from that it’s a remarkably eyrie atmosphere. It doesn’t feel like a matchday. We do walk past a mosque though.

We finally enter the ground, making our way past a posse of police; it’s an unnecessary and exaggerated presence.

Birmingham City were formed by a group of cricketers back in 1875 and were known as Small Heath Alliance. The German Luftwaffe scored 20 direct hits on St Andrews in The Second World War: that’s more efforts on target than Marcus Bent has managed all season, any season coming to think of it. 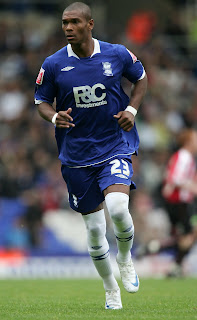 In 1956 they became the first English league club to play in Europe, drawing 0-0 at Inter Milan. They have in recent seasons, like Forest, become a yo-yo club. Players to have turned out for both clubs include: Kenny Burns, Archie Gemmill, Trevor Francis, Steve Wigley and Stern John.

It’s £30 admission (cough), I’ve sneaked Sticky in as an under 12. The programme is £3 and first class, as is the view from our seats high up in the stand.

The DJ plays a series of songs connected with blue. One of these is contender for the most annoying song heard this season; it’s the nauseating Italian Eurodance outfit, Eiffel 65 and their 1998 hit, Blue. This is followed up by Status Quo and ELO’s Mr Blue Sky; it’s overcast by the way. He finally gets the crowd going with Feel It by The Tamperer featuring Maya. Sticky says he’s going to download it when he gets home. “What’s she gonna look like with a chimney on her?” is a line from that song. What on earth is that all about? 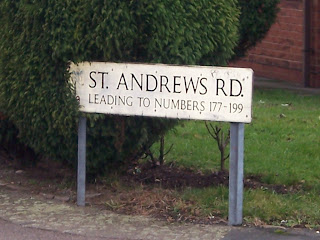 Let battle commence. The Forest faithful are in great voice and are rewarded with a good opening spell of attacking football by the Tricky Trees down the left hand flank. Tyson leaves Sebastian Larsson trailing in his wake, he bores down on Maik Taylor’s goal and lets fly, but unfortunately it takes a bobble just before contact and he skies his shot high into the stands.

Moments later Larsson is AWOL again as Tyson rampages his way down the wing, he hits a ball across the face of goal with Cohen and Garner only inches away. Larsson is having a nightmare, I bet Sandy Richardson from Crossroads is quicker in his wheelchair than the Swede is this afternoon

The Forest fans are in full flow and refer to the recent re-arrest of chief executive Karren Brady: “she’s going down, Brady’s going down.” 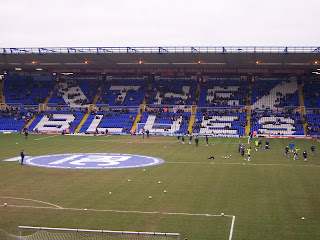 Kevin Phillips pulls up with a knee injury and is replaced by £3 million ex-Bluebird, Cameron Jerome. Both him and centre back Martin Taylor are built like Gladiators.

The Blues look short on confidence and are playing the ball long. They’ve only won twice in their last ten attempts. Bad boy Bowyer scuffs a shot wide. The game is awful and the pitch doesn’t help. Millions of pounds have been wasted and frittered away on journeymen at the expense of undersoil heating. It’s only fit for growing potatoes.

Birmingham have a good spell of pressure before the break. Liam Ridgewell forces a save from Smith with young Joe Heath clearing up the spillage. Bent hits the crossbar from a corner. And minutes before the break Larsson forces another good save from Paul Smith. The writing appears to be on the wall. 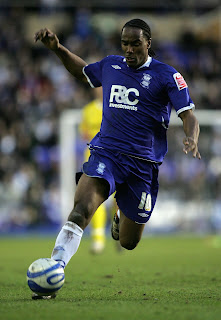 It’s déjà vu in the second half. Luke Chambers heads wide from a corner and also sees Maik Taylor make a meal of a 22 yard drive, with the ever-alert Tyson lurking close by.

But the warning signs are there for all to see. Ridgwell has already headed over from close range, when Bent opens the scoring on the hour. Murphy arrows in a cross from the left, which is turned in by Bent, a player more famed for going out with page three girls than scoring goals. He’s struck three times in thirty appearances this season; that’s goals not girls. Amazingly he’s fetched £10 million in transfer fees during his career. No wonder it’s thirty quid to get in today.

Forest are hanging on the ropes. Poor old Moloney has been marking two all day and makes way for McLeary, whilst another baffling display from Joe Garner sees him replaced by Adam Newbold. 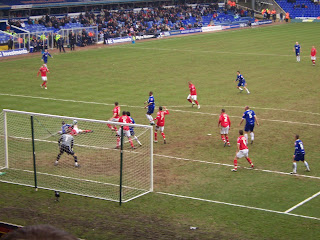 Jerome and Bent’s strength are beginning to pose problems for the Forest defence as they begin to buckle. Wilson and Morgan are hacking, slicing and panicking. Luke Chambers’s distribution is below par.

McGugan and Perch are still battling away against their more experienced counterparts, Lee Bowyer and Lee Carsley and can come away from the game with a little credit. 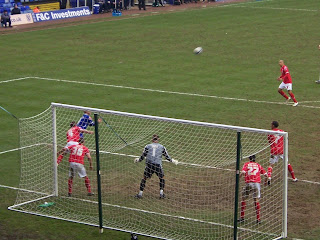 City are on song now, which is more than can be said for the home support. Only 17,000 have dared show their faces, choosing instead to watch re-runs of Crossroads on UK Gold. I’ve heard more noise made in Birmingham Central Library. “Shall we sing a song for you?”

The police have now graced us with their presence and are treated to a couple of ditties by the fans. “It’s just like watching The Bill” and the Laurel and Hardy theme tune raise a rare smile from The Groundhopper, although Sticky junior is loving all the singing and swearing (don’t tell Mrs P).

Tyson completes a miserable day, missing a golden opportunity when put through on goal.

The final whistle goes and 2-0 is not a true reflection of the game. Birmingham are better than that, and so they should be with the depth of their squad. It really should have been a St Valentine’s Day Massacre.

Man of the Match: The Away Support.
Posted by Sticky at 5:11 PM

Sticky, is that a family photograph? For readers who haven't met him, Sticky is the one stood on the right.

its definately them reaper!..those outfits are straight out of tweedies.

Bloody hell Groundhopper you got a good view of Mrs Peschisolido !

I purchased Sandy his first pair of Ferodo gloves Reaper.