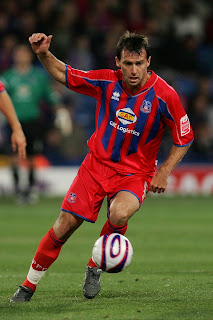 I really want a Budgie. I thought I’d cracked it earlier in the year when Mrs P planted a box of Trill seed in my snap bag on my birthday – it was just a practical joke though.

My thoughts have turned to Christmas and I’m hoping that a little green and canary fellow, who I’ve named Murphy (after the legendary Lincoln City manager Colin Murphy), will arrive on the morning of December 25th. I can teach him to whistle the EastEnders theme tune (to annoy Mrs P) and the kids will be feed him swear words. I’m not holding my breath though.

I managed to make it 4 games in 6 days this week but not all went to plan. I was all set for the FA Trophy replay between Eastwood Town and Rushden & Diamonds. I logged onto the Badgers’ website at 6pm. There was an announcement saying that the game has been cancelled due to ‘unforeseen circumstances.’ I presumed it was down to power cuts reported in the area.

The Taxman and I shot over to Quorn’s Farley Way Stadium. Lincoln United ran out worthy winners, despite playing over an hour with 10 men. I switched my phone on when I got home to find a text from Rammers. Rushden and Diamonds goalkeeper Dale Roberts, whose previous clubs include Nottingham Forest, Alfreton and Eastwood had died suddenly. I was in shock and totally numb. 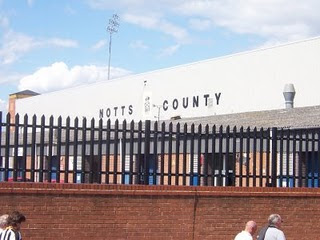 The following night was a proud moment for anybody involved in the youth set up at Notts County (I am the Talent Identification Co-ordinator for the club). We played Liverpool in the FA Youth Cup 3rd Round.

Liverpool took an early lead. A disallowed goal for the Pies on the stroke of half time proved to be a decisive turning point. We were blown away in the second period. Liverpool’s multi million pound world wide scouting network, versus little old me and my boss Mick – hardly a level playing field is it?

It’s Friday afternoon and I’m sat in the Larwood and Voce pub in Trent Bridge Cricket Ground. It’s our works’ Christmas party. I have a couple of Harvest Pale Ales. We move onto the Stratford Haven. We bump into Barthez, Tuckers and Bagpuss. They’re all steaming as they have been on the pop since midday.

We stroll into the Monkey Tree on the Avenue. Nottinghamshire County Cricket Club are holding their Xmas party in here. The world’s greatest glove man, Chris Read, is sat at a table in a Bananaman outfit. He had the misfortune to bump into a drunken Barthez in the toilets a few hours earlier. 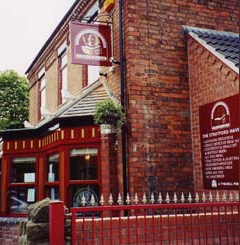 Sticky jnr is fast asleep. I don’t want to disturb the highly-strung teenager, he might kick off. I do him a favour and deliver his papers for him. The Daily Mail front page predicts that the ‘Big Freeze’ is to continue until the end of Jan. I collect some tips off junior’s customers – snooze you lose, readers.

I nip into town for some lastminute.com shopping. England’s top order collapse quicker than Gillian McKeith. The highlight of trip was hearing David Essex’s ‘A Winter’s Tale’ in Clinton Cards. My mate Shifty at work does a cracking impression of that song. I was ripped off for £8 for two cards by the way.

I stroll round to the Nuclear Scientist’s crib; he’s piloting today. The foot well in his Jaguar is overflowing with empty Ginsters sandwich wrappers, Walkers crisps packets and half full plastic bottles of Buxton’s Spring Water. 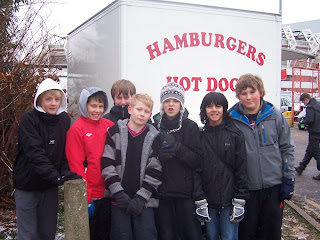 NS forced his 12 year old lad to watch Band of Brothers on DVD last night. The poor little sod has tossed and turned for most of the night.

Twenty eight of us are meeting up at the Goose in Gamston for the game today: 21 kids and 7 adults. I shout up 7 Cokes, 7 bowls of chips, 2 pints of Hardy Hanson’s Rockin Rudolph (yum yum) and a cup of coffee. Total cost £28: Non League days out are a lot cheaper.

Sunderland v Bolton is on the car radio. The Black Cats lead with a solitary goal from Danny Welbeck. We park up on the Radcliffe Road, adjacent to a frozen Grantham Canal. The kids throw branches and stones at the ice-covered surface.

As we enter the ground I notice a stationary police van with 6 coppers inside tossing it off drinking coffee. We’re in Block M of the Brian Clough 12 rows back. It’s a bird’s eye view. 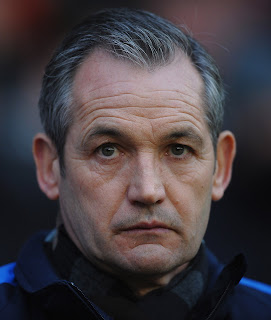 It’s a pitiful but understandable turn out by the visitors (739). They are down on their luck and are a club in financial crisis. It will need someone with the skills and experience of George Burley to get this club back on course.

Crystal Palace play in the South Norwood area of south London, in the borough of Croydon. It has a population of 15,000 and lies on the River Wandle. The author of the Sherlock Holmes novels, Arthur Conan Doyle, once lived in the area. Boxing commentator Harry Carpenter was born in South Norwood.

Its most famous resident is Pickles the dog, who bagged a £6000 reward, when finding the stolen Jules Rimet World Cup in 1966 underneath a hedge, wrapped in paper. He was invited to the celebration banquet where he was allowed to lick all the plates clean. Pickles met a tragic end when he choked on his own lead chasing a cat in 1967.

The Eagles were founded in 1905 but have been located at Selhurst Park since 1924. Their record league defeat was 9-0 to Liverpool at Anfield in 1989. Goalkeeper Perry Suckling was man of the match. 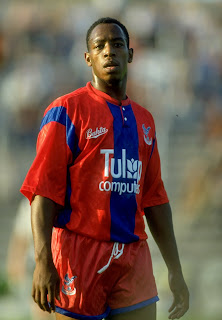 Defender Jim Cannon holds the record for the most league appearances (660). Their youngest ever player is John Bostock, who took to the field aged just 15 years old. He was soon snaffled up by Spurs.

Their record transfer fee received was for Andy Johnson, who went to Everton for a cool £8,600,000. Their biggest outlay was for French defender Valerian Ismael for 2,750,000. He went on to appear in only 13 league games.

Players to have played for the Reds and Eagles include: Neil Shipperley, Dougie Freedman (now Assistant Manager and also the scorer of Palace’s fastest league hat-trick), Ian Wright and Stan Collymore. 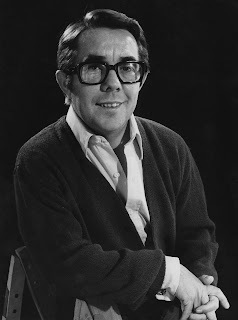 I browse at the excellent John Lawson produced programme, which is good value, even at £3. There are some interesting interviews. A journalist talks up 19 year old forward Nialle Rodney, who has made just one league appearance.

I take note that the Academy side have lost their last two games. Nothing has come through since 22 year old Lewis McGugan.

A minute’s silence is held for Dale Roberts, the former reserve goalkeeper, who died in tragic circumstances last Tuesday. The silence is shattered by latecomers singing as they walk along the banks of the Trent, unaware of the moment. 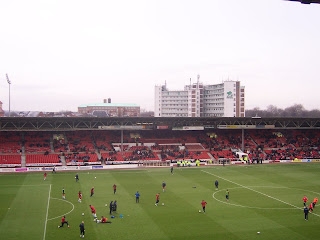 The opening 20 minutes are as dull as dish water. Palace are set up for a draw and Forest can’t break them down. The Reds start to pepper Argentinean ‘keeper Julian Speroni. McGugan stings his hands from distance. He also claws away another curling effort from the Long Eaton youngster – no wonder he’s been crowned Palace player of the Year three years in a row.

Forest take the lead on 30 minutes when Luke Chambers heads home a flighted corner from McGugan. A yellow card is issued on 35 minutes; one of the kids has lobbed a sweet at someone eight rows down, Sticky Palms immediately reaches for his top pocket.

Once again Speroni comes to the rescue when a threaded through ball by the excellent Majewski finds Earnshaw whose effort is blocked.

Half-time can’t come soon enough. The Rockin Rudolph ale has taken its toll. There’s grim news from Elland Road – Leeds are one up, but plenty of Christmas cheer from Pride Park as D***y look to be tumbling to a fourth consecutive defeat. 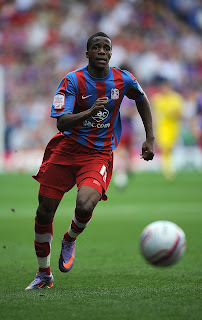 Palace go two up top at the break, and have brought on exciting 18 year old Ivory Coast striker Wilfried Zaha. His feet are fast and his pace frightening, he keeps Bertrand on his toes.

Speroni foils Earnshaw, once again as Forest run riot. The outstanding Majewski makes way for Welsh international Aaron Ramsey, a lad I first saw play for Wales U16s at Rhyl five years ago. His performance for the final 15 minutes of this game is breathtaking. 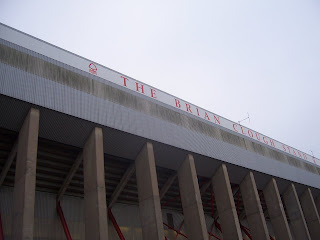 McCleary replaces an ineffectual Paul Anderson, who has had a wretched game. The 23 year old former Bromley winger makes no mistake from 12 yards following good work by Nathan Tyson.

Palace are awful. Midfielder, Neil Danns, who has given the ball away for most of the afternoon, later apologies to the Palace fans on his Twitter account.

Man of the Match: Julian Speroni and the 739 brave souls who made the trip.